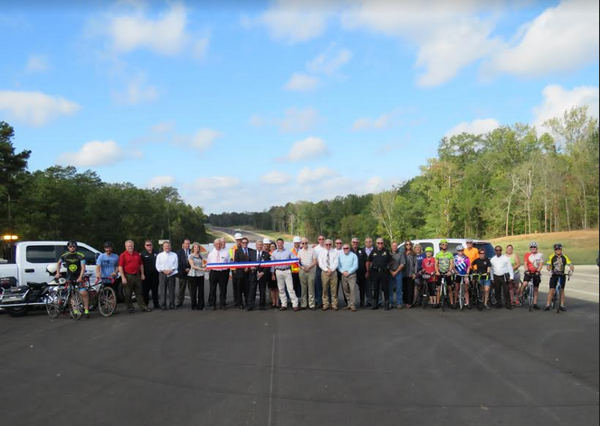 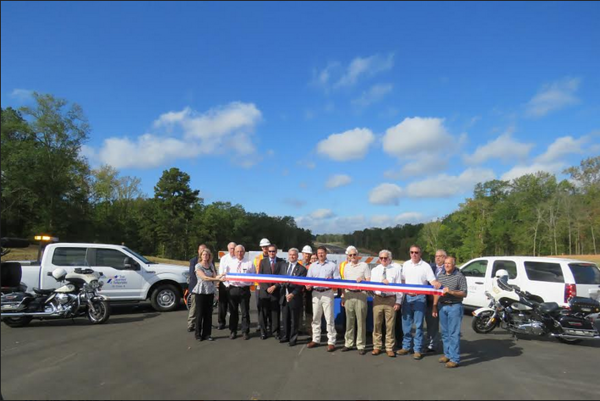 LONGVIEW - The Texas Department of Transportation and its Longview/Gregg County partners on Monday opened to traffic a portion of the new Farm-to-Market Road 2275/George Richey Road Extension with a ribbon cutting ceremony. The event at the intersection of George Richey Road and Mickey Melton Boulevard in Longview's North Business Park marks the completion of the first segment of the $34.3 million project.

The George Richey Extension is being constructed in two phases as a new four-lane divided highway from U.S. 259 to Texas Highway 300 with a continuous center turn lane. It includes dedicated bicycle lanes in the shoulders as well as sidewalks on the south side of the new roadway. The project adds a long-awaited and necessary east/west thoroughfare into the area.

The ceremony marked completion of Phase I from U.S. 259 westward to McCann Road, which began in April 2014. Construction continues on Phase II, which extends from McCann Road westward to Texas Highway 300/Gilmer Road. Work started last summer with an anticipated opening in 2018. The contractor for the project is East Texas Bridge Inc., of Longview. The project is funded through a transportation partnership between the Longview Metropolitan Planning Organization (MPO), the city of Longview, Gregg County, the Longview Economic Development Corporation and TxDOT.

"Local elected officials and leaders saw a transportation need that has regional significance and found a way to address it, said Dennis R. Cooley, TxDOT Tyler District Engineer. "Without the partnership, this project would still be years down the road."

Gregg County Judge Bill Stoudt said the project is a prime example of what can happen when entities work together and collaborate in a partnership.

"This longtime project would not be at the stage it is now, open to traffic, if not for the vision and leadership of Gregg County Judge Bill Stoudt and former Longview Mayor Jay Dean, Owen said. "It is through their vision and combining the resources of multiple local entities with the Texas Department of Transportation that made this project a reality and open to traffic seven years earlier than originally planned.

George Richey will have a significant impact to the greater Longview area as it alleviates future traffic while fueling economic development. Additional benefits are the first-ever bicycle lanes and the presence of sidewalks. It's truly exciting to see multiple modes of vehicular, pedestrian and bicycle transportation on this new roadway."

When completed, the George Richey Road/FM 2275 Extension will add approximately four miles of new roadway to the area's transportation system improving connectivity and capacity, thereby relieving parallel east/west corridors such as Hawkins Parkway and FM 1844, which have exceeded their capacity. The project will create a continuous thoroughfare from U.S. 259 to U.S. 271 north of Gladewater, relieve congestion in the greater Longview area and provide additional access to the Longview North Business Park.