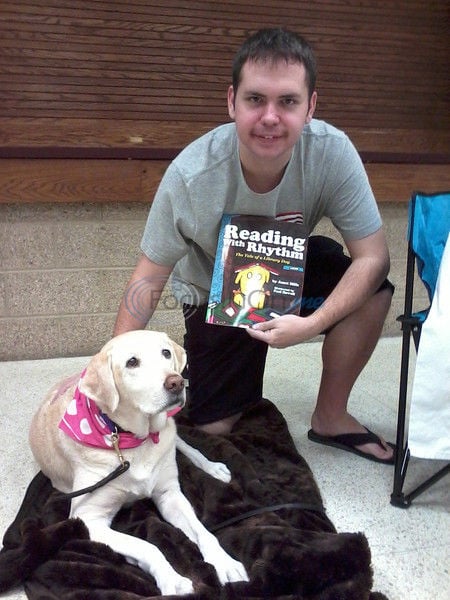 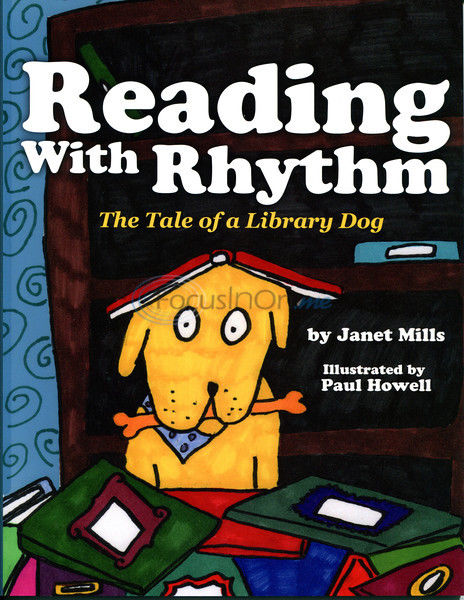 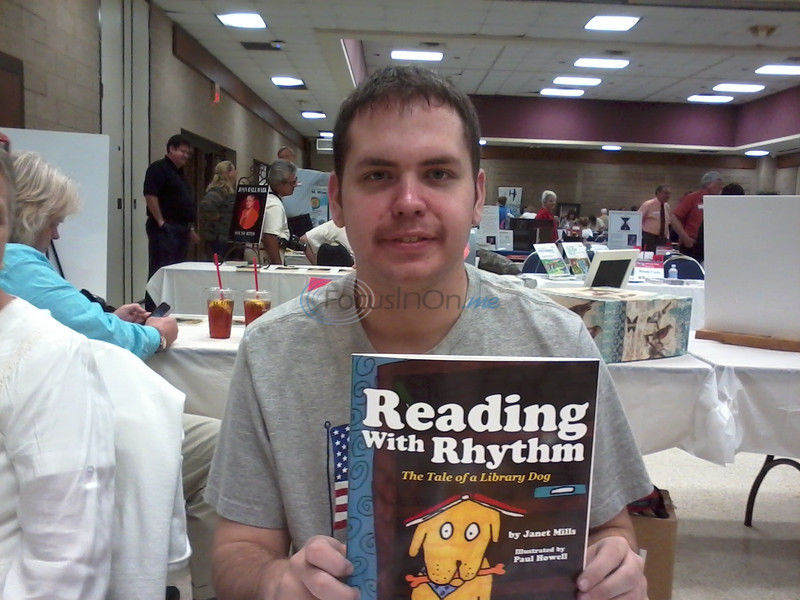 This isn't the typical story of a young man and a dog — it's the tale of an autistic young illustrator and a library dog.

I met Paul Howell, Janet Mills and library dog Rhythm at East Texas Book Fest on Saturday (where I spent much of the day at a table with former Smith County Sheriff J.B. Smith and the entertainment that comes with him.)

"Reading with Rhythm: The Tale of a Library Dog" is written by Ms. Mills, substitute teacher in Glen Rose, and an animal-assisted therapy volunteer who takes her dogs to special-needs classrooms and reading programs at schools and libraries, and illustrated by Howell, a 2011 graduate of Glen Rose High School.

Rhythm, decked out in a pink-and-white polka dot bandana and the fest's name badge, lounged relaxed on a fuzzy brown blanket, calm as could be, while tiny tots and adults alike petted her fur and fussed over her. Once, she posed with a little blonde girl with a tiara to go with the bandana.

Being the center of attention is old hat for Rhythm — she's been a therapy dog for eight years.

At the table above her sat Howell with a pen and paper in hand, sometimes signing copies of the book he illustrated, often bringing life to blank paper.

Ms. Mills and her Labrador retriever met Howell while visiting his class.

"He was starting to sell his artwork. ... So I gave him the story and the photos of Rhythm" and let him start working on it, Ms. Mills said.

Howell worked on the drawings in his art class over the course of about two school years.

"It took him awhile to get in the mind frame to do a picture to go with a story ..." Ms. Mills said. "Once he got going, he put them out quickly."

After the line drawings, he had to get his mind around coloring them.

The result: a 24-page full-color children's book about Rhythm's job at the library, illustrated with pen and marker.

Chatting with the 21-year-old Howell is like having a conversation with my cousin: He's into wrestling (John Cena is his favorite), comics — superheroes and sci-fi — and movies.

When asked who his favorite superhero or movie star is, he hesitates.

"Oh that's a tough one," he said before offering up Wolverine and Megan Fox.

He also spends time petsitting a chorkie — a half Chihuahua, half Yorkie mix — and helping his mom out in Palestine.

And he said he hopes to illustrate another book in the future.

"Watching this whole book thing with Paul … it's fun to see his confidence building. ... He knows he can do something worthwhile," Ms. Mills said.

"Reading with Rhythm" is available online at Amazon and Barnes and Noble. Visit readingwithrhythm.wordpress.com for more about the book and book reviews of other children's books.