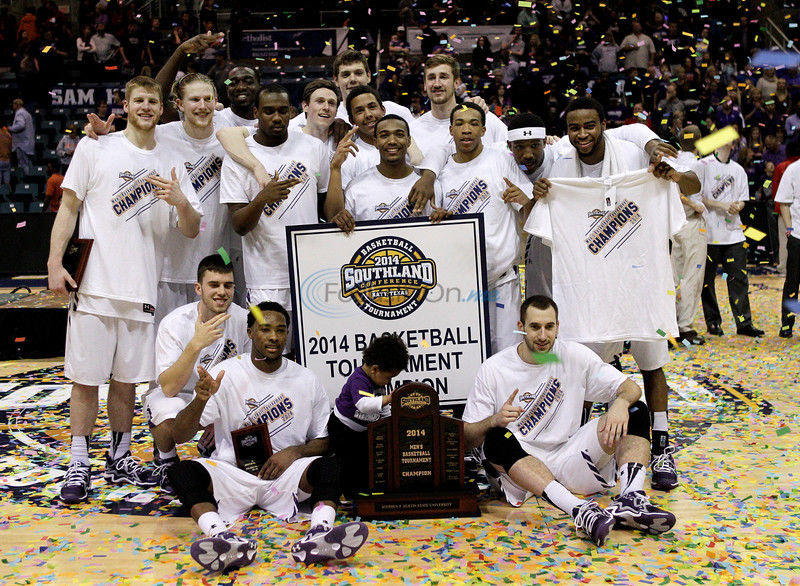 File - In this March 15, 2014, file photo, the Stephen F. Austin team celebrates with the championship trophy after an NCAA college basketball game for the Southland Conference tournament championship, in Katy, Texas. Stephen F. Austin is headed to the NCAA tournament as the first 30-win team in Southland Conference history. (AP Photo/Bob Levey, File) 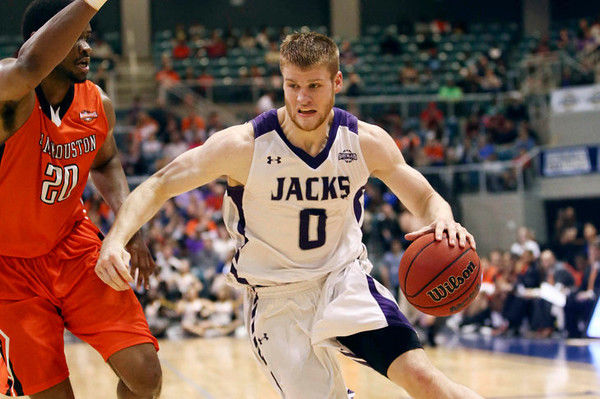 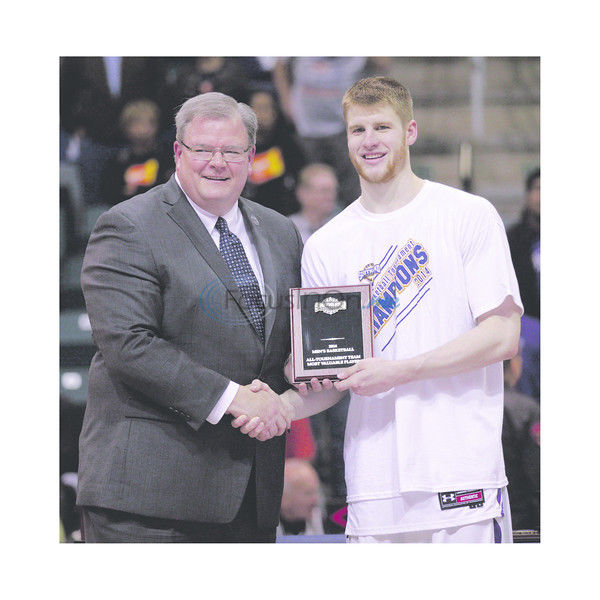 File - In this March 15, 2014, file photo, the Stephen F. Austin team celebrates with the championship trophy after an NCAA college basketball game for the Southland Conference tournament championship, in Katy, Texas. Stephen F. Austin is headed to the NCAA tournament as the first 30-win team in Southland Conference history. (AP Photo/Bob Levey, File)

Can Cinderella be dressed in purple and white this year?

Seems like a perfect match — the Big Dance and Stephen F. Austin State University, this season's belles of the ball.

But this SFA basketball team is not a fairy tale.

The Lumberjacks, albeit a mid-major, are considered by many basketball experts to be one of the squads that could make major in-roads in the NCAA Men's Basketball Tournament.

An upset or two and "Axe'm Jacks" will not just be heard in the Piney Woods of East Texas, but in San Diego, site of the Lumberjacks' first round match with Virginia Commonwealth University on Friday, and all across this March Madness nation.

Tyler is one of the biggest SFA alumni bases in the state, and many of their fans have Lumberjack fever and are expecting big things.

"Yes they can!" Jan Dobbs Barton, a 1978 SFA graduate, said on the ETFinalScore.com Facebook page. "Cinderella sharpens her axe!"

Her assessment is the prevalent mood of Purple clad fans from everywhere, not just Nacogdoches, home of the school.

The Lumberjacks and their fans are hoping they can join the darlings of the dance from years past such as George Mason, Florida Gulf Coast and their opponent this week, the VCU Rams, who made the Final Four in 2011.

SFA and VCU are in the South Regional and will play at 6:27 p.m. Friday at Viejas Arena in San Diego. The game will be broadcast on truTV. The winner of the SFA-VCU game will play the winner of the UCLA-Tulsa contest on Sunday for the right to advance to the Sweet 16 in Memphis, Tenn., on March 27-29.

The Southland Conference champion Lumberjacks (31-2) enter the tournament riding a 28-game win streak (second in the country to unbeaten and No. 1 seed Wichita State).

Also, the team is led by Brad Underwood, a near 30-year veteran in his first season as a Division I head coach. Underwood went to the NCAA Tournament four times in six years as an assistant at Kansas State.

James Perkins, president & chairman of the board of Citizens 1st Bank in Tyler and a SFA grad, echoed Underwood's thoughts on winning 30 games.

"SFA is a great team, but winning 30 games is an incredible feat," said Perkins, who plans to be in San Diego with well over 100 SFA fans. "As coach Underwood said, you can play the worst team in the NCAA 30 times and it's tough to beat them 30 times. Sometimes there is a slip-up."

Perkins sits on the bench with the coaching staff for many games, including a tight loss to another NCAA team, the University of Texas, in Austin in November.

"It is no coincidence this program has done so well," Perkins said. "Under the leadership of Bob Garrett (Tylerite who is a member of the SFA Board of Regents) and (SFA) president Dr. (Baker) Pattillo. They have made this a success.

"There have been more than 6,000 at the games at SFA. This is a family sport, great sport to take your children to watch. It takes discipline, coaching and it promotes fitness and health running up and down the court."

Chuck Cox, a former Longview, Tyler and Palestine resident and an SFA graduate, is pumped up about his team.

"When head coach Danny Kaspar left SFA for Texas State after another big season, I fully expected 2013-14 to be a rebuilding year for the Lumberjacks," said Cox, a former Tyler Morning Telegraph sports writer who now lives in Dallas. "After all, SFA had lost three starters to graduation, and new head coach Brad Underwood was embarking on his first head coaching job at the Division I level. To think this team is about to head into the NCAA Tournament with a 28-game winning streak under its belt is amazing.

"Coach Underwood and his team have done an outstanding job meshing with one another. It's not only the best SFA team I've ever seen; it's some of the best chemistry I've seen with any team at any level. This team seems to be a cohesive unity and a family. I've seen the 'Jacks play in person three times this season. All three were blowout wins.

"I got to see SFA cap a perfect 18-0 run through Southland play a couple of weeks ago in Nacogdoches. Since then, I've heard national writers, broadcasters and pundits sing the praises of SFA as a possible Cinderella team to watch. I'm not sure I've ever been prouder to be a Lumberjack."

Dave Nedbalek, who coached King's Academy to the Texas Christian Athletic League state tournament this season, is a big fan of the Lumberjacks.

"I do have them slotted to beat VCU," said the Ouachita Baptist grad. "Man, are they disciplined on both ends of the floor. They have an incredibly well-balanced scoring attack, and a defense that takes the ball away very efficiently. I love coach Underwood as a model coach, and his system is stellar, but unfortunately I have them running into a stout UCLA team in the second round. With their skill set and discipline, and as methodical as they are, they should be able to slow anyone down and compete, but I think the likes of Florida above them end them in the Sweet 16 at best.

"This is the jump start you need to become a household name in regards to general respect, recruiting and building a national fan base. This could very well be the beginnings of the next Wichita-esque squad."

Added longtime high school and college coach Larry Hargett, "Wishing them the best … but I don't see us getting by VCU. … Incredible year both nonconference and conference. Makes me proud to be a grad!"

Now, the Lumberjacks and their fans will see how long the team will be at the ball.

A trip to the Final Four before midnight strikes would suit SFA fans just fine.