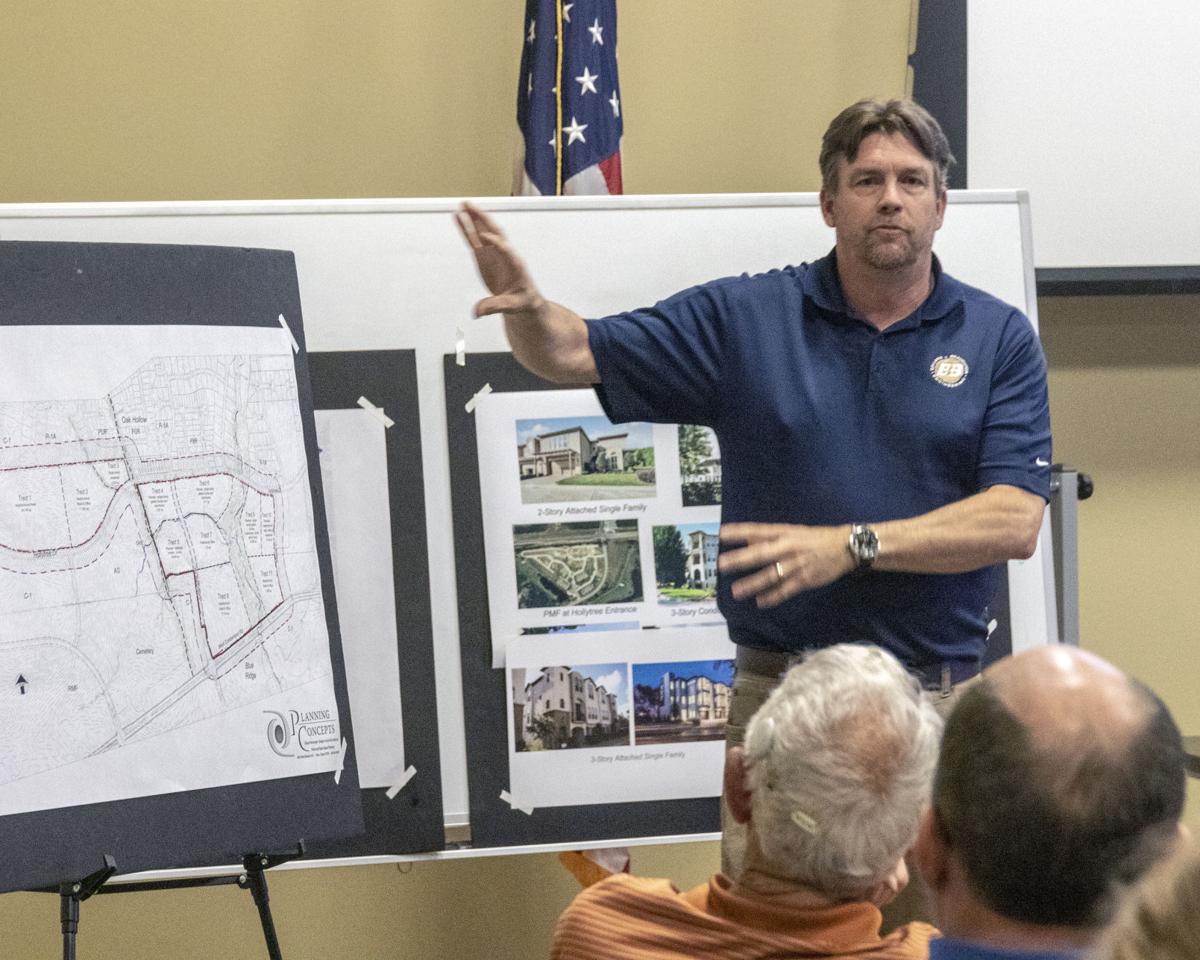 Mark Priestner OF Planning Concepts explains the proposed zoning to the audience at the Roosth Properties community meeting Thursday. A subsidiary of Roosth Properties LLC has asked the city to rezone 115 acres of mostly agricultural land north of West Cumberland Road. 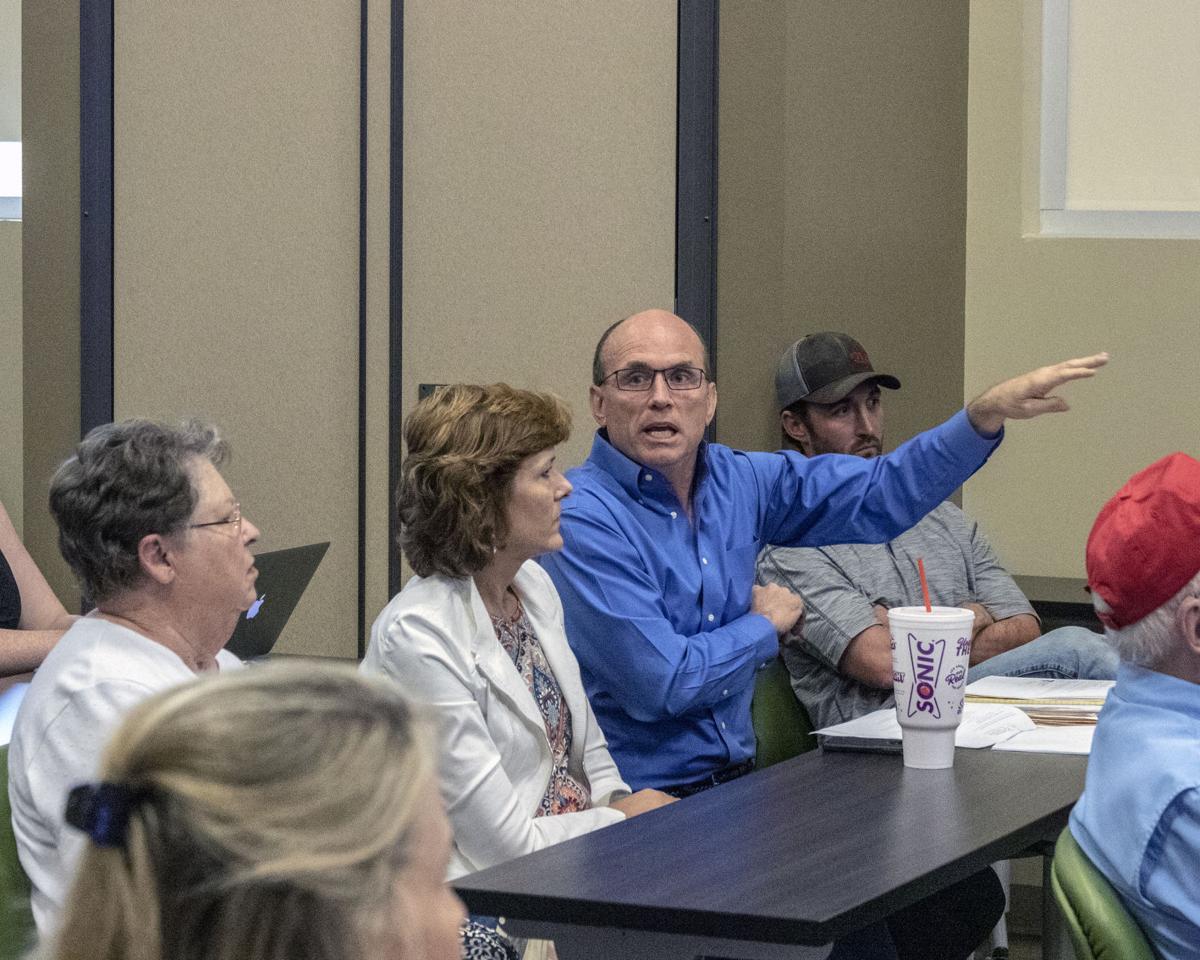 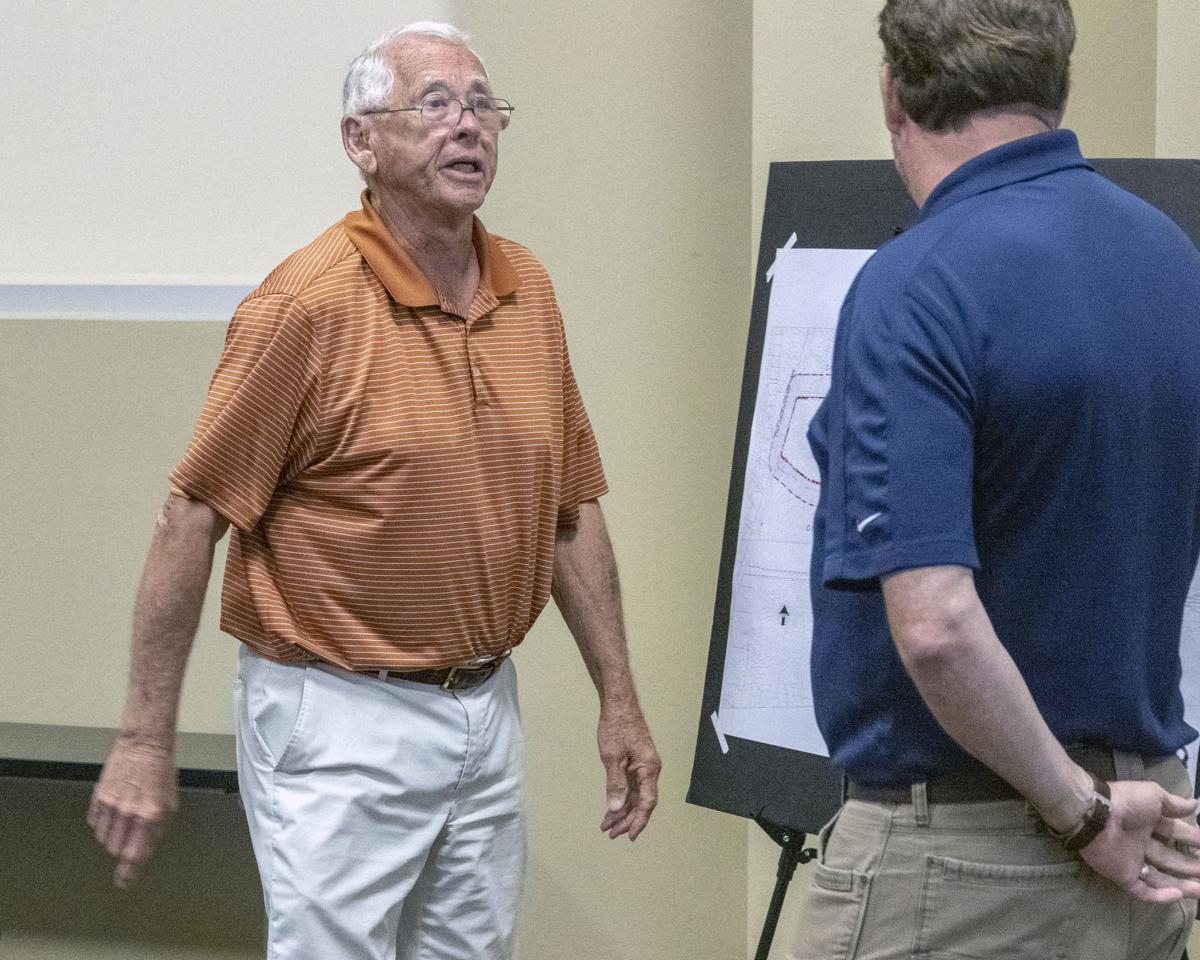 A member of the audience seeks clarification from Mark Priestner (r) at the Roosth Properties community meeting to discuss a new development plan, Thursday, May 30, 2019. The community meeting was held at the Faulkner Park police substation, in Tyler. (Rick Flack/Freelance) 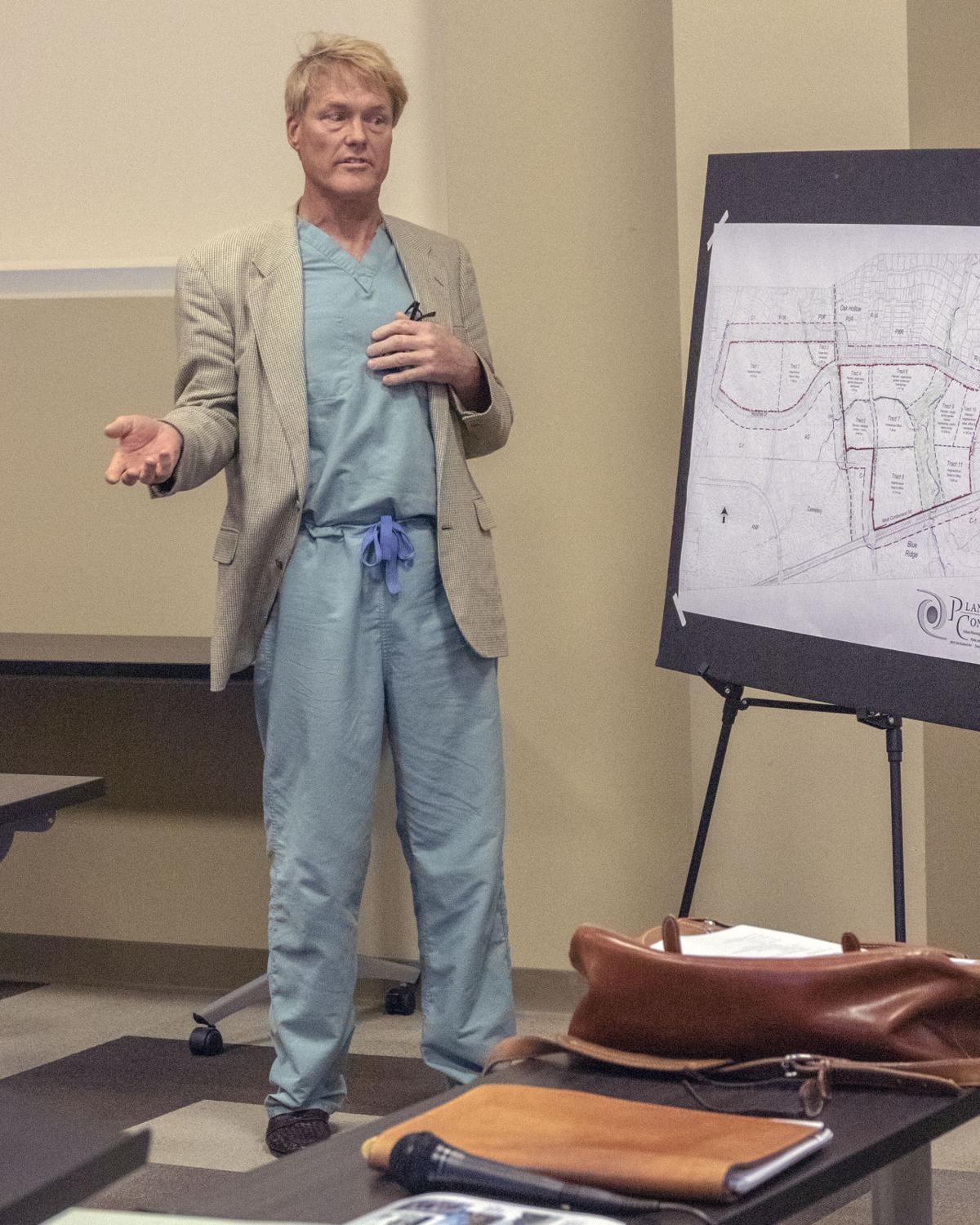 Dr. Kevin Pauza asks a question at the Roosth Properties community meeting to discuss a new development plan, held Thursday at the Faulkner Park police substation in Tyler. Pauza and Mark Priestner, the planner on the project engaged in a sharp exchange of words. 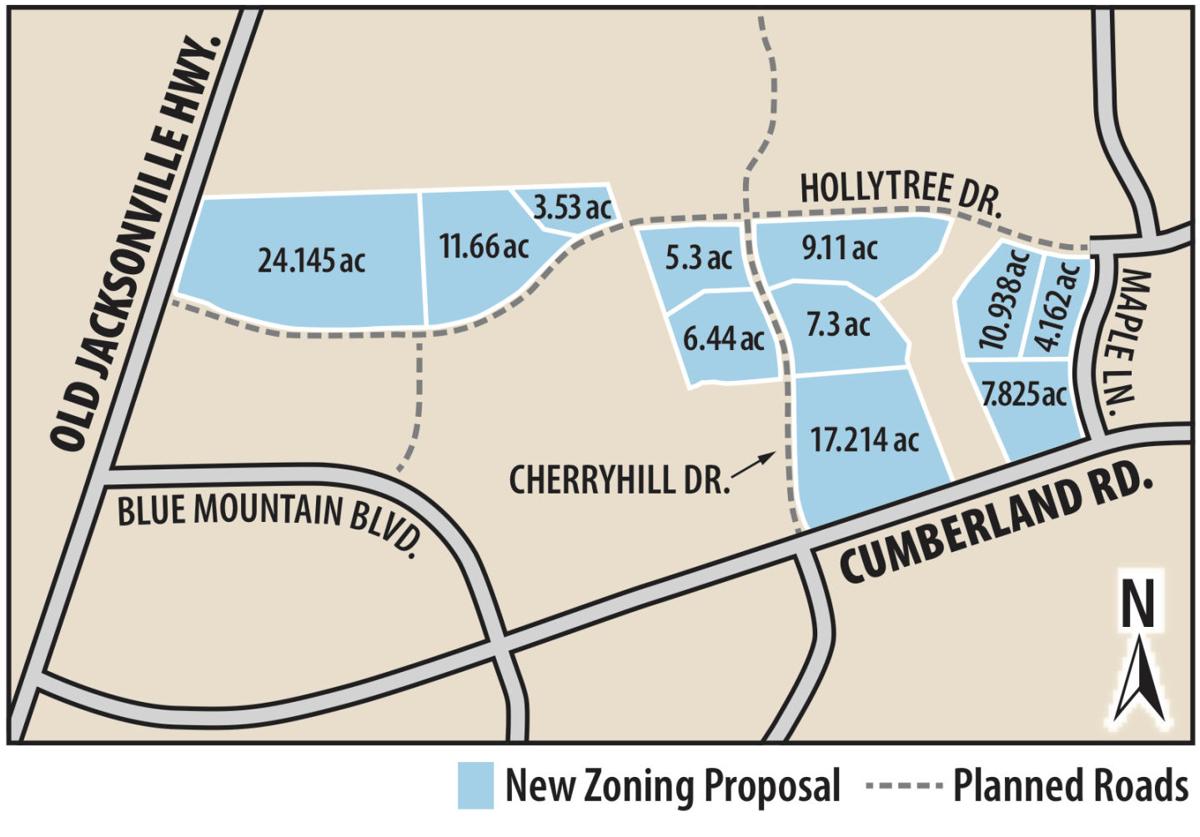 Mark Priestner OF Planning Concepts explains the proposed zoning to the audience at the Roosth Properties community meeting Thursday. A subsidiary of Roosth Properties LLC has asked the city to rezone 115 acres of mostly agricultural land north of West Cumberland Road.

A member of the audience seeks clarification from Mark Priestner (r) at the Roosth Properties community meeting to discuss a new development plan, Thursday, May 30, 2019. The community meeting was held at the Faulkner Park police substation, in Tyler. (Rick Flack/Freelance)

Dr. Kevin Pauza asks a question at the Roosth Properties community meeting to discuss a new development plan, held Thursday at the Faulkner Park police substation in Tyler. Pauza and Mark Priestner, the planner on the project engaged in a sharp exchange of words.

Another real estate company is seeking to zone multiple tracts of land in the southern part of Tyler, near Hollytree and the Village at Cumberland Park.

A subsidiary of Roosth Properties LLC has asked the city of Tyler to rezone 115 acres of mostly agricultural land north of West Cumberland Road so it can be used for housing, offices and commercial space.

This is the third major development proposed in that area this year. The Genecov Group received approval from the City Council to rezone 294 acres April 24, and the City Council rezoned 87 acres owned by another company on May 22.

Steve Roosth, the president of Roosth Properties, said the land his company is seeking to rezone is part of the approximately 430 acres of land that his company owned in partnership with the Genecov Group for decades.

The two companies split up their assets in November, and decided to move forward with the zoning and development processes separately, he said.

“We do do some development, but I anticipate that some parcels will be sold off and some will be developed by us,” Roosth said. “But it’s too early really to say with any certainty exactly how or who will develop it.”

Zoning documents from Roosth Properties outline a concept for 36 acres of commercial property bordering Old Jacksonville Highway to the west and Hollytree Drive to the south, and another 27 acres north of West Cumberland.

There would be four multifamily lots on a total of about 32 acres starting just west of a proposed extension of Cherryhill Drive and ending west of Maple Lane, the road developers built a year ago connecting Hollytree Drive with West Cumberland Road.

The remaining land would be for other residential, office, retail and mixed uses. However, the 32 acres of multifamily housing, and a perception that the zoning designation would lead to low-income housing, are causing the most controversy.

A neighborhood meeting Thursday night at Tyler’s Faulkner Park Police Station attracted dozens of people, including board members of nearby homeowners associations and some of the same people who vocally opposed the Genecov Group’s project at the Tyler Planning and Zoning Commission and Tyler City Council.

“I know nobody’s happy to be here,” Mark Priestner, the planner on the Roosth and Genecov projects, said in an introduction. “I understand that. We’re all fully aware that nobody wants any development out here, and I understand that.”

The crowd responded: “That’s not true.”

Priestner said the commercial property would be used for retail, but nothing as significant as, say, a new Costco. He said the multifamily development would not allow large apartment buildings. He said the units would be more similar to townhomes or garden homes.

“The big issue I think at hand is there’s many neighbors who would like to maintain the character of Tyler,” said Kevin Pauza, 54, of Hollytree Circle. “There are many that have neighborhoods established and bought those houses a long time ago and there’s no benefit to Tyler from what you’re describing.”

Priestner responded: “I respectfully disagree, because this is exactly what every millennial looks for when they’re looking for a place to live.”

Several in the crowd disagreed when Priestner said the plans are similar to what is being planned in Austin, Dallas and Houston.

Some asked whether the multifamily housing would be owned or rented.

“Both,” Priestner said. “By federal law, they can do both.”

James Horner, 53, of Hollytree, questioned whether there would be unforeseen effects.

“And now the element that’s going to be in those apartments — you just caused basically a crime wave throughout the rest of Tyler — because now you’ve got people who can’t afford to live down in millennial land,” he said.

Mayor Martin Heines came in through a back door about 45 minutes into the discussion, and, ultimately, Priestner decided to end the meeting after an hour, saying the parties would not be able to agree.

After the meeting, Roosth, the company president, said he would work to incorporate some of the neighbors’ ideas.

The Genecov Group received a similar response from residents of the Hollytree subdivision when the company asked in January to rezone about 18 acres, including for mixed uses and multifamily housing.

The company responded with neighborhood meetings, and by resubmitting its application to rezone about 320 acres. After continued opposition, the City Council approved the majority of the proposal, and left 25 acres of proposed multifamily zoning untouched.

The Planning and Zoning Commission will reconsider those 25 acres at a work session on Tuesday afternoon after the 1:30 p.m. meeting at City Hall where the commission will consider the 115-acre project proposed by Roosth Properties.

Kyle Kingma, a planning manager for the city of Tyler, said in an interview the recent developments in the area fit into the city’s future plans, and they’re to be expected given the construction of West Cumberland Road in 2016.

Additionally, Kingma said that the city has found that it is a better idea to zone all the property at once, instead of in segments, so the area will be master planned as opposed to done piecemeal.

Heather Nick, a managing director for the city of Tyler, said Thursday night that there may be more room for improvement, this time to change city’s zoning designation “planned multifamily,” which can include apartments, townhomes and other types of projects, she said.

“’Planned multifamily is comprehensive, and it maybe has a bad name because it may not convey what every applicant is proposing to do in their development because it has that ‘multifamily’ in the title,” Nick said.

“As we move forward to update our plan and maybe look at some ordinance tweaks that we can do to improve our ordinance, this may be some good feedback,” she said. “We can look at our code and maybe come up with some new zoning designations or different names to be a little bit more descriptive.”

One man yelled from the back, “Do you live in our neighborhood?”

The man yelled again: “Does she live in our neighborhood?”