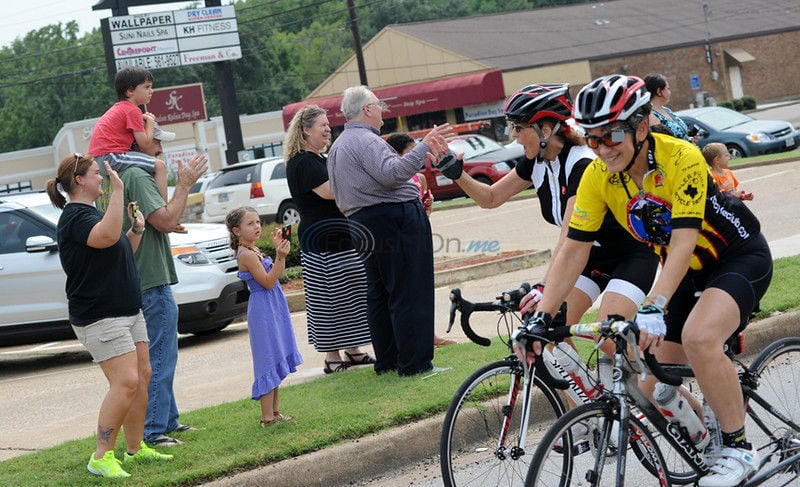 Supporters near the intersection cheer for the passing cyclists. (Victor Texcucano/Staff) 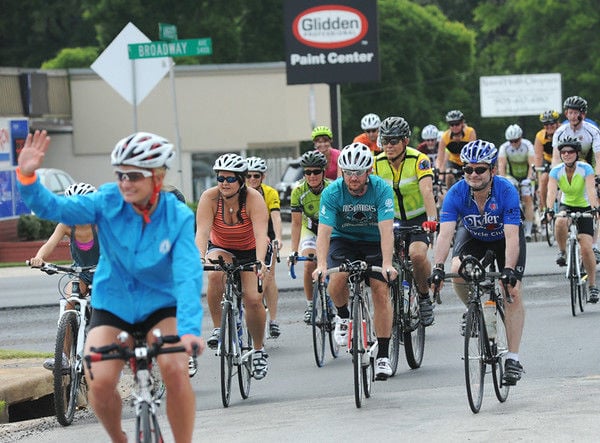 More than 200 cyclists ride across the intersection of Broadway Avenue and Amherst Street on Sunday afternoon during the Vigilance Ride, an eight mile police-escorted ride across Tyler to promote bicycle road safety and support fellow cyclists in East Texas who recently have suffered injuries after being struck by cars. (Victor Texcucano/Staff)

Supporters near the intersection cheer for the passing cyclists. (Victor Texcucano/Staff)

More than 200 cyclists ride across the intersection of Broadway Avenue and Amherst Street on Sunday afternoon during the Vigilance Ride, an eight mile police-escorted ride across Tyler to promote bicycle road safety and support fellow cyclists in East Texas who recently have suffered injuries after being struck by cars. (Victor Texcucano/Staff)

Cyclists came out in droves on Sunday to show solidarity and support for their fellow riders who have been injured on East Texas roadways in the past month.

An estimated 213 cyclists from across East Texas rode in the 8-mile Vigilance Ride, held in Tyler. The group, escorted by the Tyler Police Department, gathered at Elite Bicycles, 610 Shelley Drive, and made a loop around town, primarily using marked bicycle paths. The route gave visibility to the cyclists on Old Jacksonville Highway, Broadway Avenue and Amherst Drive.

The idea for the ride came after cars struck several local cyclists in the county recently.

Janice Terry Phillips was left in critical condition last week after a car struck her on Farm-to-Market Road 3052. She is expected to recover but still has a long road ahead, said event organizer, friend and fellow cyclist Cori Moore.

In mid-July, Mark Cathey was struck by the mirror of a Ford F-150 while riding his bike on U.S. Highway 69 on the overpass at Farm-to-Market Road 344. Cathey suffered broken ribs and other injures, but also is expected to recover.

Mrs. Moore said about four bike clubs from Houston, Tyler, Athens and Mineola participated in the ride. She said though many of the cyclists did not personally know the bikers who were struck, there is a solidarity within the community.

"It could have been any of us," she said. "We all ride those roads, and we all experience the same things."

Amy Goff, a 49-year-old cyclist in Athens, dived in for the ride.

While on a trip to Florida in December, Ms. Goff was struck by a car. Luckily, the accident was at an intersection at low speeds. She said she was lucky.

"Everyone you talk to here has had a really close call or know someone who has been (hit)," she said. "It happens all the time."

Mrs. Moore said the ride was not a protest, but rather a show of camaraderie within the biking community for its fellow riders.

Ms. Goff said she heard about the event on Facebook and was glad to see so many riders together.

"When we first signed up, I think there were 30 people who agreed to go, and it kept climbing and it continued to grow, so to see this many people out here, it was great," she said.