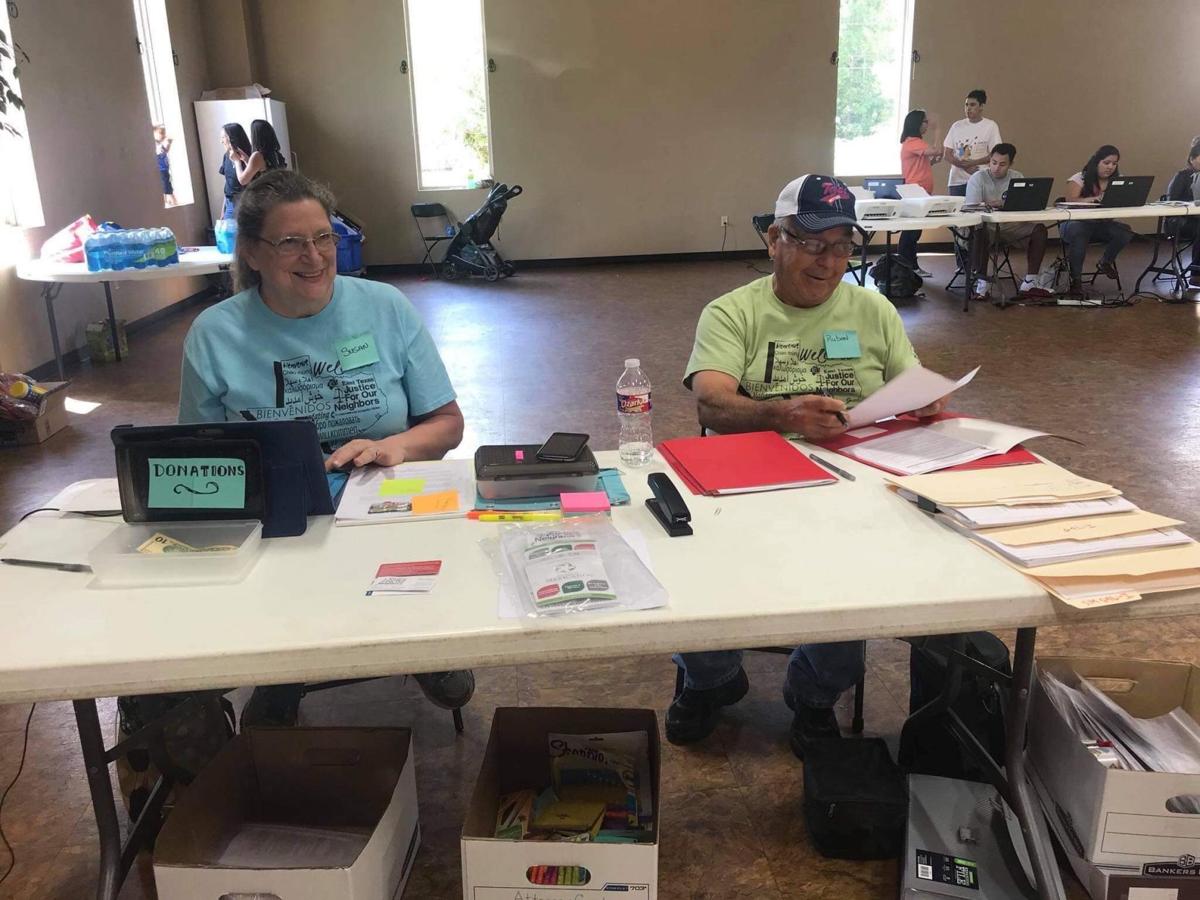 Ruben and Susan Gutierrez volunteer together at a DACA renewal clinic. (Courtesy) 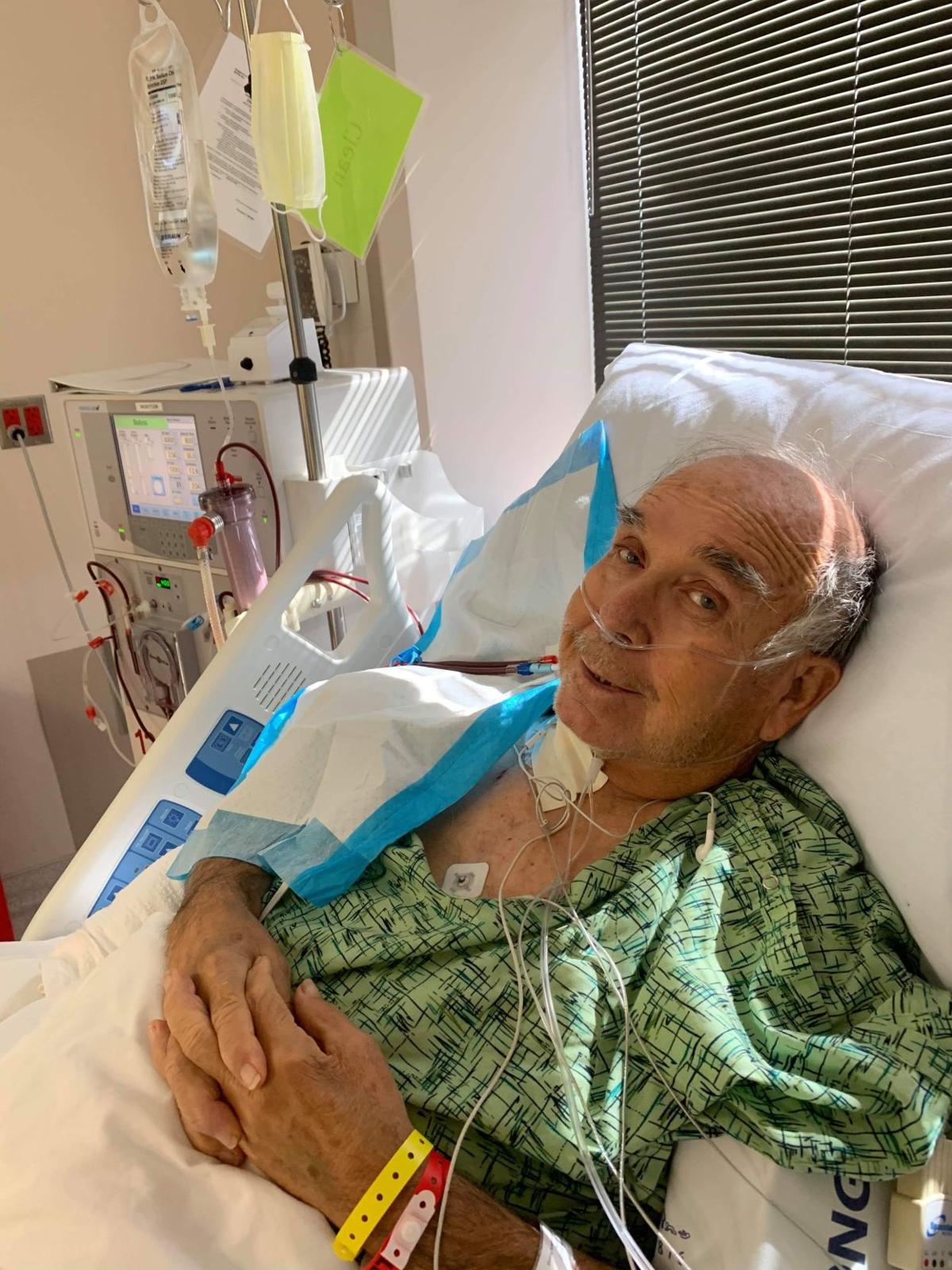 Ruben Gutierrez in the hospital (Courtesy) 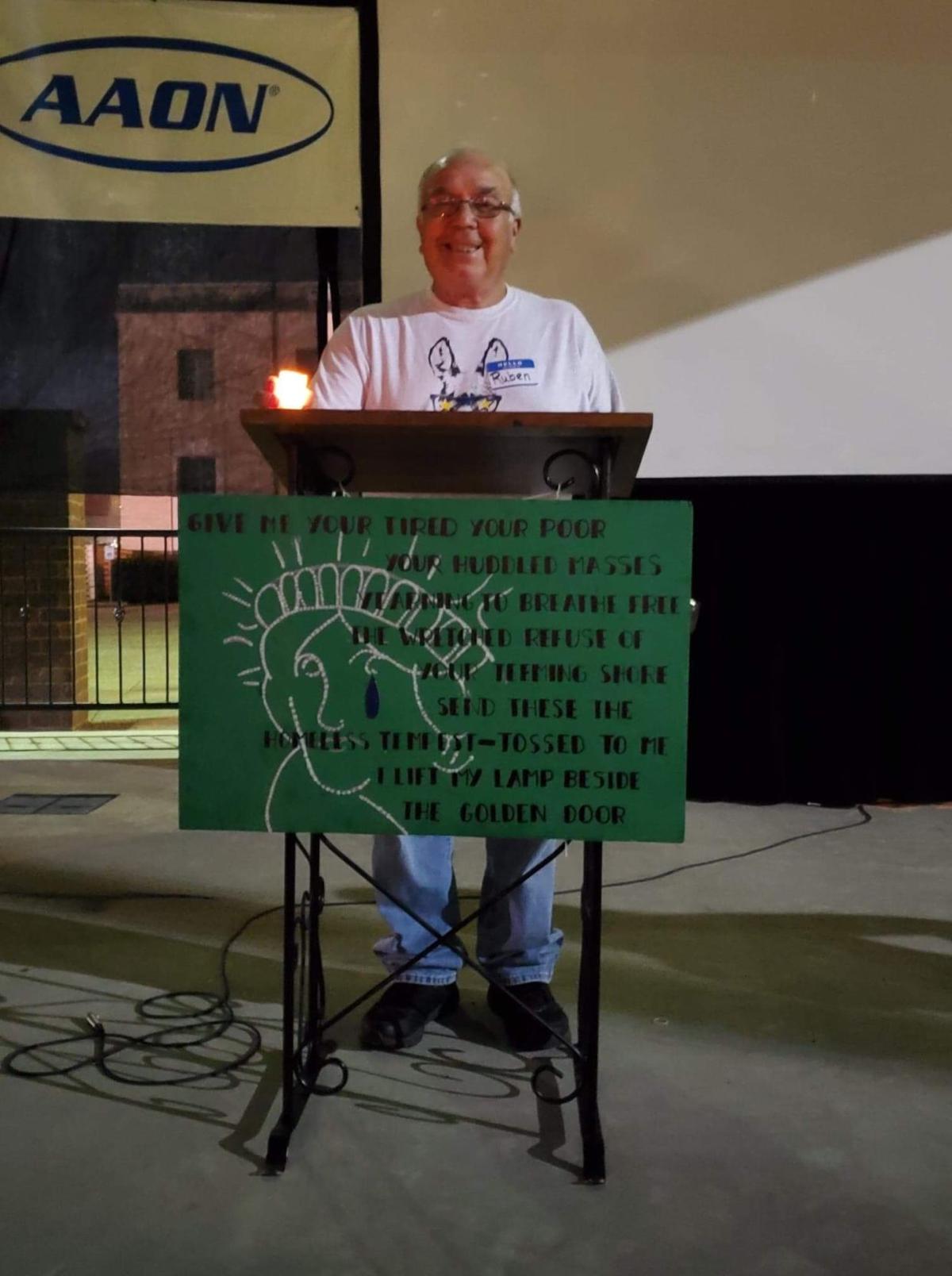 Ruben Gutierrez poses for a photo after the Lights for Liberty event in Longview on July 12. (Courtesy) 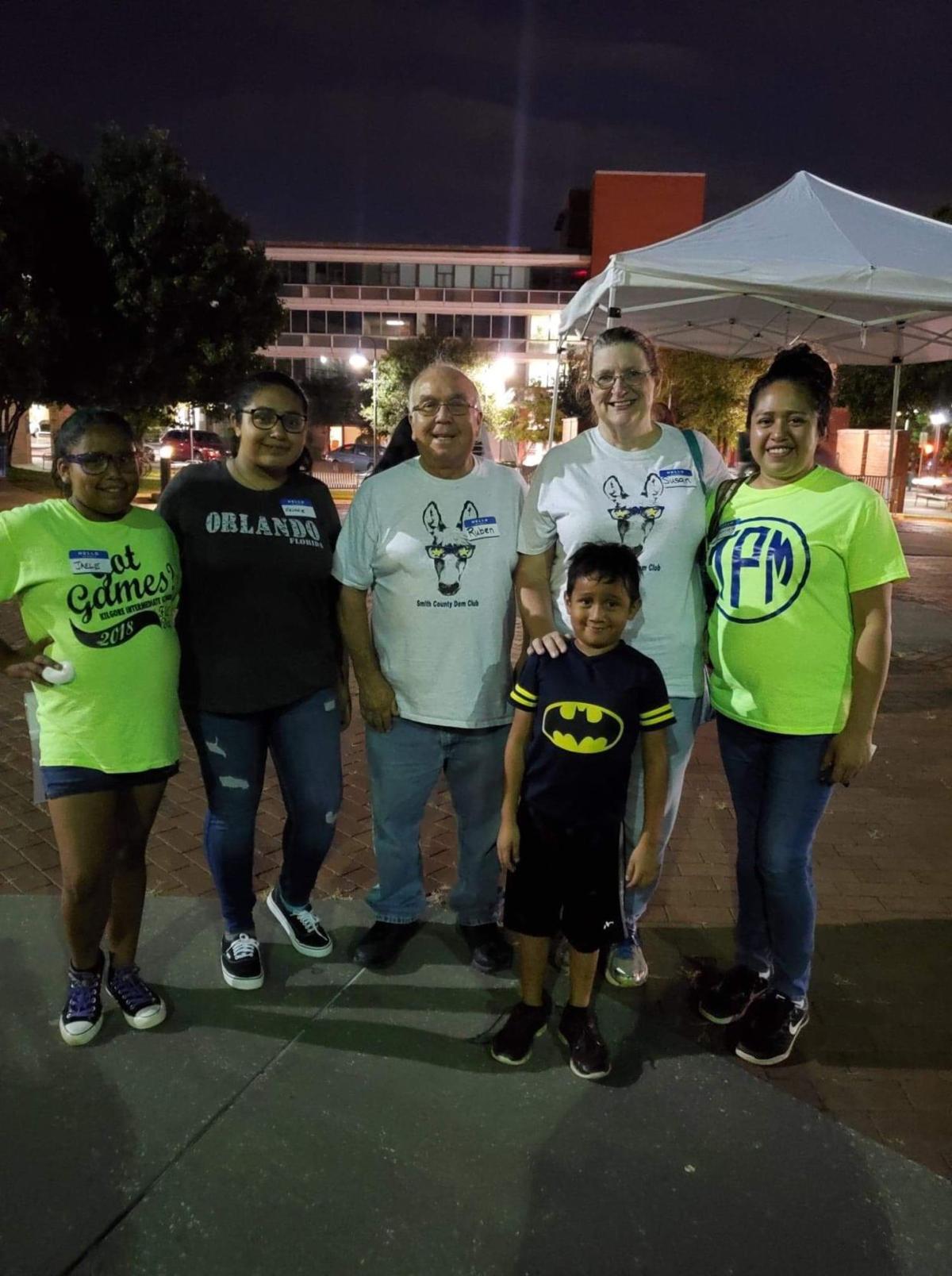 Ruben and Susan Gutierrez, center in white, pose for a photo at an immigration event in Longview. (Courtesy)

Ruben and Susan Gutierrez volunteer together at a DACA renewal clinic. (Courtesy)

Ruben Gutierrez in the hospital (Courtesy)

Ruben Gutierrez poses for a photo after the Lights for Liberty event in Longview on July 12. (Courtesy)

Ruben and Susan Gutierrez, center in white, pose for a photo at an immigration event in Longview. (Courtesy)

Ruben Gutierrez was the very definition of an immigrant achieving the American dream, and he never stopped working to help others do the same.

Gutierrez, 69, was a retired corrections officer, immigration activist and community leader — but above all those things, he was a beloved friend to many in Smith County. He died Friday of complications from Legionnaires' disease.

His wife, Susan Gutierrez, told the Tyler Morning Telegraph that his story really began in the 1920s when his mother, a U.S. citizen, was deported under the Mexican Repatriation Act. That act resulted in the deportations more than a million Hispanic people believed to be of Mexican heritage. More than 60% were estimated to be birthright citizens of the United States, according to research by National Public Radio and United States Citizen and Immigration Services.

Activism was in his blood. Susan Gutierrez said her husband's mother never stopped trying to give her children the best possible life and his father led protests over the condition of miners in the coal mine where he worked. His father died when Ruben Gutierrez was 4 years old and his mother would later take her children back to the United States.

“He became a naturalized citizen at the same time his mother and brother did,” Susan Gutierrez said. “He has always tried to fight for the people without a voice.”

Friend Paulina Pedroza said that desire to work hard and create a better future was something he was passionate about passing on to the people he mentored and advocated for.

We have lost a warrior in our community. It was an honor to know him. He will be missed greatly. My heart goes out to his sweet wife. https://t.co/y6xvaBalMM

At 23 he met his future wife. Friends describe their love as rare and special.

“I have known very few couples who exemplify true love,” Nancy Nichols said. “Susan and Ruben are one. What an honor to call them my friends.”

They were married for more than 46 years and had three children, Ruben Duane, Rebecca and Gina. Ruben Duane now lives in Eugene, Oregon, and their daughters live in Austin.

Ruben went into law enforcement, and as a young man ran for justice of the peace in Deaf Smith County.

In 2003 they would move to Tyler. Susan’s work would eventually bring them to East Texas when she took a job with Brookshire's in 2003. Ruben worked for the Texas Department of Criminal Justice as a corrections officer.

Susan Gutierrez said her husband retired 10 years later and loved the newfound free time he had to do volunteer work.

His service for others extended from immigration advocacy, serving as a translator for the Mexican Consulate as needed, and working with the Smith County Democratic Party as a volunteer and later precinct chair.

Ruben Gutierrez was giving his time to others when he is believed to have contracted Legionnaires' disease at the East Texas State Fair. He was hospitalized for most of early October and was released on Oct. 17. A photo taken of him checking out of the hospital showed his fighting spirit, as he smiled while wearing a Superman shirt and a blanket for the cape.

Only a few weeks later he was back in the hospital having contracted a deadly gastrointestinal bug related to the antibiotics used to treat the Legionnaires' disease.

His wife said he spent nearly the entirety of the fair setting up and working the booth. He was there every day, giving his time to others, just as he did in his everyday life, she said.

“He didn’t know any stranger. He was friends with everyone, even those he didn’t agree with,” she said. “He said hello to everyone. He walked, and if they wanted to talk, he would stop and talk.”

When he saw young adults in danger of losing the protected status they worked so hard for as DACA recipients, he jumped in and helped advocate. When families were being separated at the border, he worked with his friend Dalila Reynoso and Justice for Our Neighbors to give them a voice. Shirley Watson said that when she met Ruben Gutierrez at Justice for Our Neighbors, it felt like they had been friends all their lives. She said it felt like she let him down when she wasn’t able to help volunteer at the fair.

“I loved Ruben,” she said. “He would do anything to help friend or stranger.”

My heart is completely broken over this loss. Ruben was an incredible person. Much love to Susan and their family during this difficult time ❤️ https://t.co/KEaDl983l4

When Reynoso ran for City Council in hopes of bringing a Hispanic voice to the body, he served as her campaign treasurer.

“I think that he was a person to bring about change in our community,” Reynoso said. “He was frustrated with not just immigration, but also not being represented in our community as a Hispanic person. Being a son of immigrants, he was just passionate about serving others."

Reynoso said she came to see him not only as a mentor, but also a father figure. Having lost her father, she said Ruben Gutierrez made a huge impact on her life acting as a sounding board, letting her vent when needed and offering help and advice.

“I think he’s had an awesome impact and for me personally just to have someone to listen to you, understand your frustration and give you those words of encouragement to keep on going and remind you that we can all make a difference,” she said. “Those moments that he and I spent together, I never told him that a lot of the conversations reminded me a lot of my father.”

More than anything, though, Ruben Gutierrez valued his time. Not in a selfish way, but with a deep understanding of how much he could do for others with it.