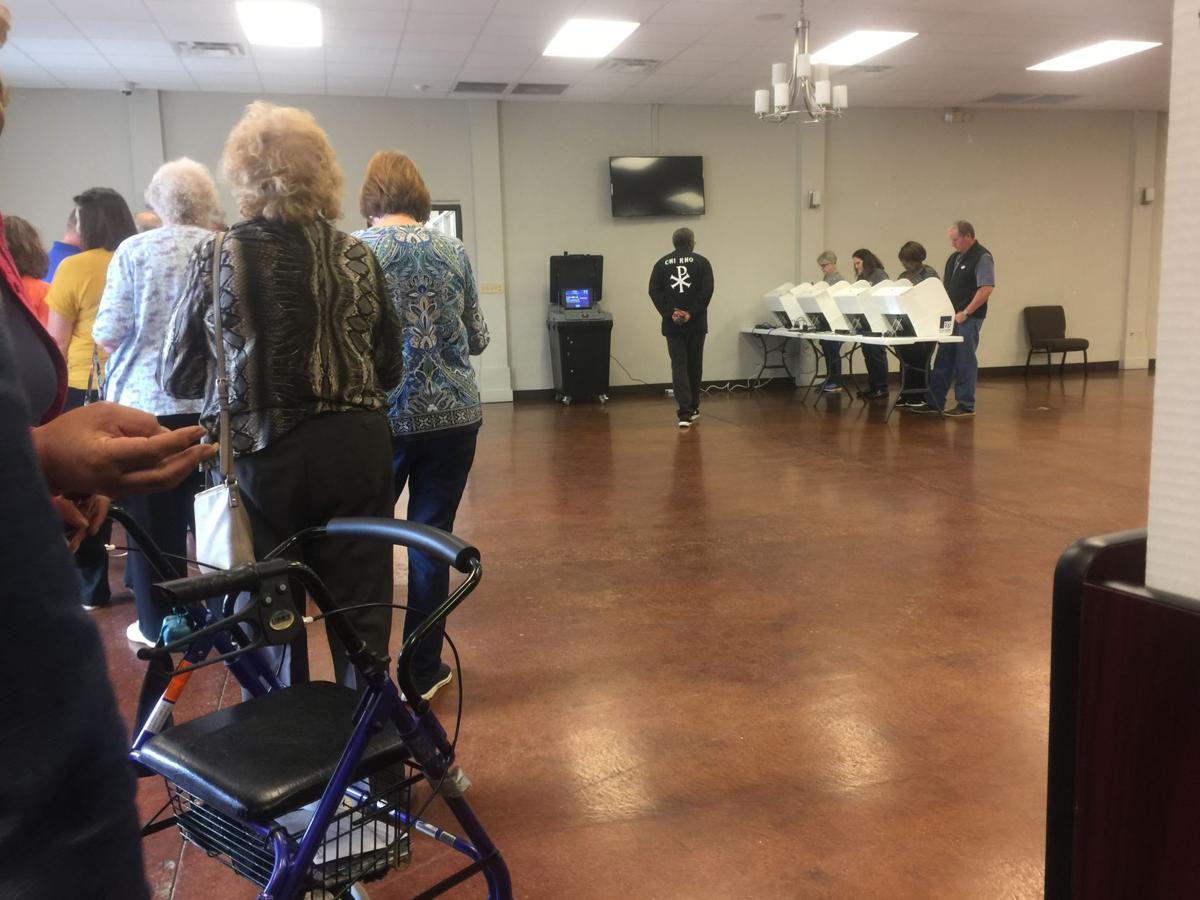 Voters lined up Tuesday at the R.B. Hubbard Center in downtown Tyler. 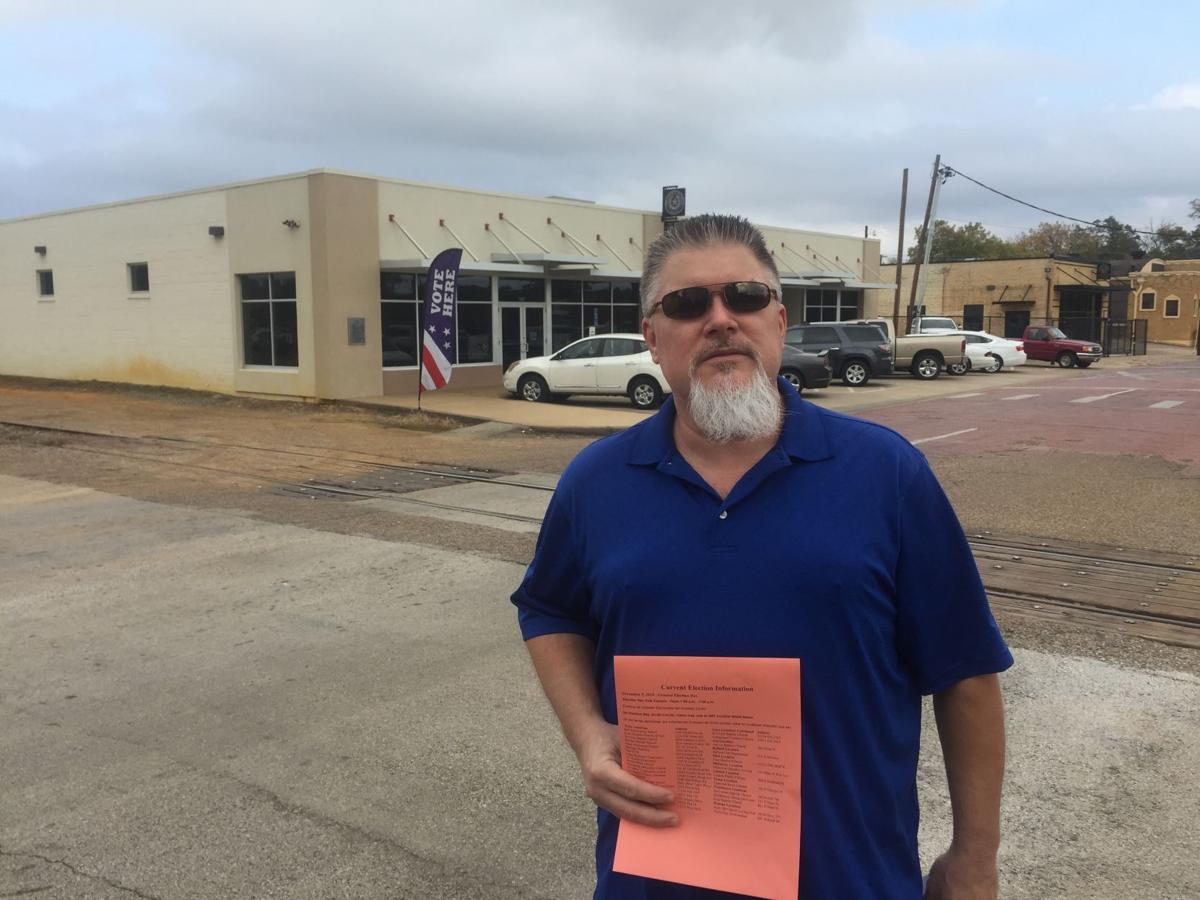 Cory McCoy/staff Eric Boettcher holds a list of polling places. He began to pass out the list after waiting nearly an hour to vote at the Hub on Tuesday.

Voters lined up Tuesday at the R.B. Hubbard Center in downtown Tyler.

Cory McCoy/staff Eric Boettcher holds a list of polling places. He began to pass out the list after waiting nearly an hour to vote at the Hub on Tuesday.

Political leaders are concerned that issues at polling places in Smith County this week are a preview of an even rockier road ahead.

Frustration is mounting from both sides of the aisle about long lines and voting machines going down during Tuesday’s election. On social media and in interviews, voters have described waits ranging from 45 minutes in some locations to more than two hours in others. Now leaders across the spectrum are speaking out about what they believe went wrong.

JoAnn Fleming, executive director of Grassroots America–We the People, said she is one of the voters who faced a more than a two-hour wait at the polls. She said while she was in line at the Noonday polling location she had plenty of time to listen as neighbors voiced their frustrations with the process. After spending a good portion of her day in line, Fleming said she relayed those concerns to County Judge Nathaniel Moran.

One woman she talked to said she had tried three times to vote that day before finally being able to.

“She was there out at Noonday at 7 o’clock and they came out and told her the voting machines were not working,” Fleming said. “Probably 100 people left. She said, ‘I wonder if they ever got a chance to come back and vote.’”

Fleming said she felt for the poll workers who were doing their best, but faced understandably frustrated voters.

“I can’t say thank you enough to the people who work our elections and sit there all day and work for the public,” she said. “And even though they’ve had a very aggravated day, they serve the public with a smile on their face.”

Shortly after noon on Election Day the Smith County Elections Office acknowledged the Gresham location had to be closed due to a gas leak and also said locations in Lindale, Noonday and the Glass Recreation Center in Tyler all had issues with equipment when opening.

“That’s the thing that is heartbreaking about this, that people who wanted to vote and care enough to look into the issues just got frustrated and didn’t have time,” Fleming said. “If you are faced with standing in line for 30 minutes and ... two hours that can certainly be a deterrent to voting.”

The Tyler Morning Telegraph reached out to Smith County Elections Administrator Karen Nelson to figure out just what went wrong. Nelson seemed to indicate the problem was with poll workers unfamiliar with newer machines rather than technical issues.

“Aside from a few connectivity and IT issues, the primary difficulty experienced on Election Day stemmed from the poll workers’ familiarity with the new election machines,” Nelson wrote in an email. “The major challenge with using new machines and new technology is getting people familiar and comfortable with using them. Tuesday’s election provided that real-time opportunity. We had no real issues with the 177 new election machines we deployed.”

Smith County Democrat Club President Nancy Nichols was working one of those locations. She said election workers were not given a manual for setup, instructions were incomplete or missing, and workers were not made aware of a last-minute IT security change.

“It wasn’t in the instructions or verbally communicated to on-site workers. That made complete setup impossible. Impossible,” Nichols said. “All of this could have been anticipated and prevented with advance setup teams moving from site to site long before the required time to open the polls. Preplanning is the job of the elections office.”

Nichols said that when workers began having problems, voters weren’t being offered alternatives.

“When the polls ‘went down,’ voters should have been told what was happening, given the locations of the four nearest functioning voting locations, and offered a paper ballot. That’s common sense, common courtesy, and aligned with the election (regulations). This didn’t happen. That’s voter suppression. It also makes voters angry,” she said.

Nichols doesn’t believe voters were being offered paper ballots or given directions. Between noon and 1 p.m. at the Hub in downtown Tyler, the main voting center for the county and home of the elections office, at least two voters became so frustrated with the wait that after they voted, they went into the next room where election information is available and grabbed preprinted polling location lists to hand out to voters in line.

At the time voter Eric Boettcher said he was frustrated after waiting nearly an hour and being told he couldn’t be on his cellphone to check for information on other polling locations.

“The job of the elections administrator is to make sure every eligible voter is afforded the opportunity to vote,” Nichols said. “That’s the job of every election judge and clerk, too. I feel horrible that I lost voters because it was impossible for me to do the setup before 7 a.m.”

Fleming also addressed lost votes, noting the county needs to do everything in its power to ensure the county isn’t disenfranchising voters. She pointed to the narrow passage of a sales tax increase for Smith County Emergency Services District No. 2. The measure passed by just 71 votes after trending toward failure in early voting.

Nelson said 177 of the county’s 300 voting machines were deployed on Tuesday. Fleming and Elizabeth Ayub, the communications director for the Smith County Republican Party, both said the county needs to start working now to ensure a plan is in place to avoid a similar situation in the March primary elections and November 2020 presidential elections.

Ayub said that while issues may arise, it’s important they can work with the county to correct those issues. She said the group is already in communication with the elections office to assess the issues and get to work on solutions as soon as possible.

“There were definitely some calibration issues that we are working through with the new machines and we are being proactive to find solutions so that the primaries will have more machines and more people who will handle those situations,” Ayub said.

Nelson said that, historically, constitutional elections have a very low turnout and the same number of machines were sent out in previous similar elections, noting that more than 900 ballots were cast at both the Hub and the Whitehouse voting location. Ayub said the Republican Party had recommended more be put into use, but the decision rests with the county.

Total voter turnout was 16,088, or 11.63% of registered voters in the county. That’s about one-fifth of the 57.1 % turnout for the 2018 midterm elections. Fleming said the county needs to be prepared for a record turnout, saying she expects many voters who did not turn out in 2018 to hit the ballot box with one vote in mind — President Donald Trump.

“I am sorry that some voters were frustrated and chose to leave without voting,” Nelson said. “The upside to having countywide voting on Election Day is that the voter is not tied to a specific location.”

Moran acknowledged the need to be better prepared come March.

“The administration of our elections this past Tuesday did not rise to the level of excellence that I expect and that this community deserves,” Moran said when reached for comment. “We must do better in the March primary and November general election next year to ensure that Election Day support for the election judges is improved; more machines are deployed; wait times are reduced; election sites do not have nay interruptions of operations; and the voter experience with our new machines is maximized.”

Moran stressed that the county will be working alongside both Democratic and Republican groups to provide as much training as needed for their election judges and to avoid a repeat next year.

The Smith County Commissioners Court detailed what went wrong during the Nov. 5 election and the changes the county plans to make to ensure it…