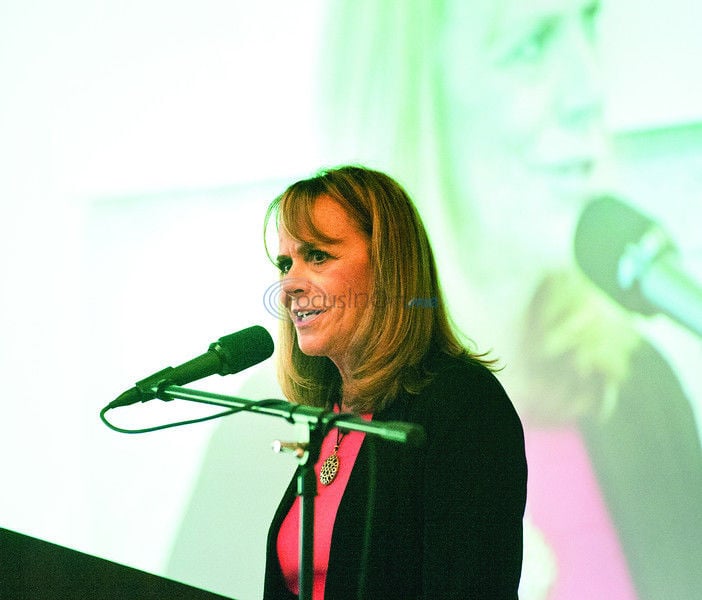 Laura Schroff, author of "The Invisible Thread" speaks at the St. Paul Foundation Luncheon at The Cascades on Wednesday. Herb Nygren, Jr./Staff

Laura Schroff, author of "The Invisible Thread" speaks at the St. Paul Foundation Luncheon at The Cascades on Wednesday. Herb Nygren, Jr./Staff

"When I toured the facility today, I was really in awe, I couldn't believe it," she said. "The thing I love most about Tyler, Texas, is the heart that you have. Each and every one of you understands that each day brings the opportunity to change someone's life."

Ms. Schroff is the author of the book, "The Invisible Thread," which details the story of how her life as a busy advertising executive was changed by an 11-year-old boy asking for money for food.

His name was Maurice Mazyck, and 27 years later, Ms. Schroff calls him the son she never had.

"What I do remember is the fact that he said he was hungry; those were the words that resonated in my head," she said.

Instead of giving him money, Ms. Schroff invited Maurice to McDonald's.

She doesn't know what made her turn around, just that the two were destined to meet.

Statistically, Maurice was in danger of going down the same dark road as his parents when he met Ms. Schroff at the age of 11. His mother and grandmother were addicted to drugs, and his father was heavily involved with gangs and drug dealing and hadn't been involved in Maurice's life since he was 6.

The friendship "not only changed his life, it changed my life."

"The one thing about our friendship that makes me really proud is that Maurice broke the cycle of poverty, and drugs, and violence," she said.

The two became more involved in each other's lives; Mrs. Schroff invited him to baseball games, restaurants and cooked dinner at her apartment.

"He had never had an adult express interest in him. That's what he loved," she said. "I told him all the time I thought he was a really good kid; he just happened to get stuck in a really hard life. ... You and I are used to having friendships in our lives, but for so many kids like Maurice and like the ones at St. Paul Children's Foundation, they don't necessarily have people in their lives that they can trust."

Maurice now has a successful career in construction and was a partner in creating the book. He and his family still visit with Ms. Schroff regularly. Part of the book proceeds are donated to Share Our Strength: No Kid Hungry.

The story of Mrs. Schroff and Maurice is similar to the story of hoe St. Paul's, which now serves 40,000 per year, got started.

"Early one Sunday morning, as she hurried off to Sunday School at St. Paul's United Methodist Church, Dana Malloy was approached by a young neighborhood Hispanic boy on his bicycle," said Sharlyn Cannady, St. Paul's executive director. "He asked, ‘Can anyone go to church here?' Stunned that a child would think that they weren't welcome in the church, Dana responded, ‘Well, of course! Come with me and I'll show you in.' To which he responded (quite horrified), ‘Oh no. My sister says this church is only for rich white ladies!'"

"If she hadn't stopped and thought about what he was really saying, that story wouldn't have ended with the foundation," she said. "It was an invisible thread that connected them. It's an amazing story, I think."