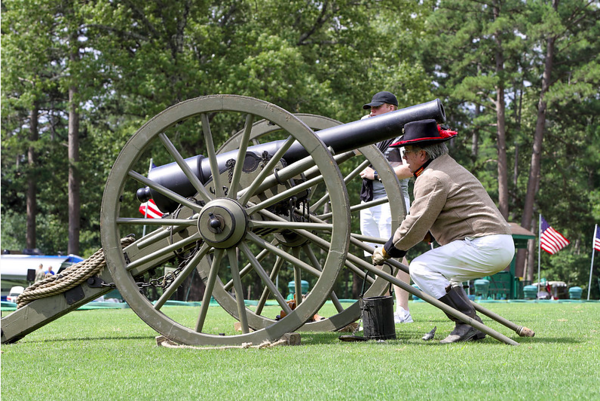 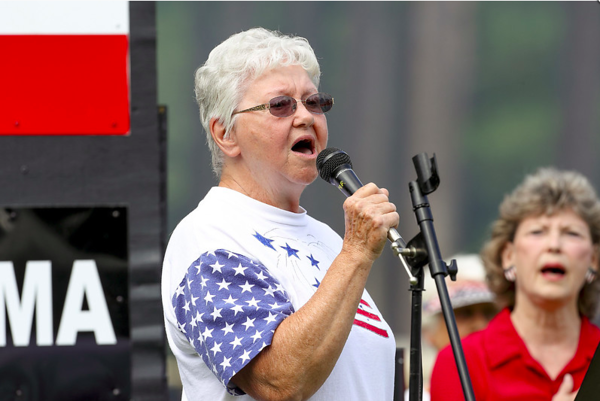 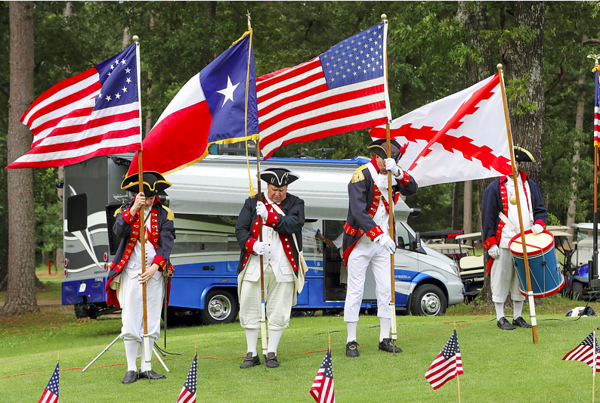 HOLLY LAKE RANCH - Retired pro football players and military veterans came together once again at Holly Lake Ranch Golf Club to play 18 holes and honor the men and women who have served our country.

The 17th Annual Veterans Memorial Golf Tournament featured a cannon blast, musket fire and patriotism from one and all before a ball was placed on a tee. Every branch of service was represented and recognized, along with honorary World War II and Korea veterans, Errol Freeman, Bob Robinson, John Watson, Bill Everitt, Jack Hestand, Richard Strauss, Ted Farrar and Bill Seledic.

All proceeds from the event benefit the Greater Hawkins Veterans Memorial Association.

Greg Demko, tournament director and retired Air Force veteran who was a munitions specialist in Vietnam, led the opening ceremony.

Every year, the tournament is held the first Tuesday after Memorial Day. It just so happened that this year’s event fell on June 6.

Demko felt obliged to begin the festivities with a tribute to honor the anniversary of what happened on June 6, 1944 - otherwise known as Operation Overlord, or D-Day. He listed American casualties, British casualties and Canadian casualties from the separate beach landings.

He asked everyone to never forget their sacrifice. This annual tournament is held to maintain the Hawkins Memorial, so “lest we forget.”

More tributes followed with the final one an opportunity to recognize each branch of service represented at the event as Vicki Shaw of the G.H.M.V.A sang each armed forces song with the Army, Navy, Coast Guard, Air Force and Marines all stepping forward to circle the putting green at Holly Lake.

“It’s hard to believe that we have so many people out here, many of whom really don’t play a lot (of golf) anymore, but they come out and support the memorial,” Demko said afterward. “Last year we had the biggest attendance we’ve ever had with 170, and this year we have 192.

“Some ex-NFL players have come out and we have been receiving media coverage, which is great, but the bottom line is maintaining that memorial. Every penny goes to making sure that memorial looks good.”

One of those ex-NFL players, Gant, now a minister, sported one of his Dallas Cowboys Super Bowl rings and led everyone in invocation before the ceremony began.

“Every year I get excited when I see one of the guys call from Holly Lake,” said Gant, who played safety and special teams for the Cowboys and later the Tampa Bay Buccaneers from 1990-97, winning Super Bowl XXVII and XXVIII with Dallas over the Buffalo Bills in 1992 and 1993 seasons.

“This is where my heart always wants to do. I love giving back to organizations like this one. It’s hard for me to thank every veteran - my dad was a vet, my uncles, and I just love giving back because these guys sacrificed to keep us in this safe country that we are in,” Gant said.

Like Gant, Richard Strauss followed his father’s legacy by serving in the military. His father was a part of World War II, and “he never let me forget it” Strauss said with a grin while wearing his Korean War Veteran cap.

“I think they have done wonderful in coming up with what they have done (for this tournament and memorial),” said Strauss, who is originally from Spokane, Washington. “I am proud to be a part of it. (I wasn’t a part of) D-Day, but I hope people never forget the (guys) who defended this land on the beaches that day because they were outstanding.”

Cowboys legendary tight end DuPree was making his first appearance at Holly Lake for the event.

“I think it’s a great event,” said DuPree, who played in three Super Bowls for the Cowboys during his 10-year career stretching from 1973 to 1983.

“It’s one of the things that grows on you. As a youth, you very seldom realize what kind of contributions people, particularly all branches of military have made … it’s a humbling experience to know that you’re in the company of people that allows you to have the freedoms that you have today.”

Notes: The Sons of the Revolution, Hawkins chapter, posted the colors, along with the Lonestar Color Guard … The pledge of allegiance was led by the World War II and Korean War Veterans … The national anthem and “God Bless America” was sung by Glenda Farrell … “Proud to be an American” was sung by Barbara Cooper … Military vehicles were provided by the 136th Military Police Texas Army National Guard and the 721st Engineer Company Army Reserves coordinated by MSgt. Miguel Fabbiani.