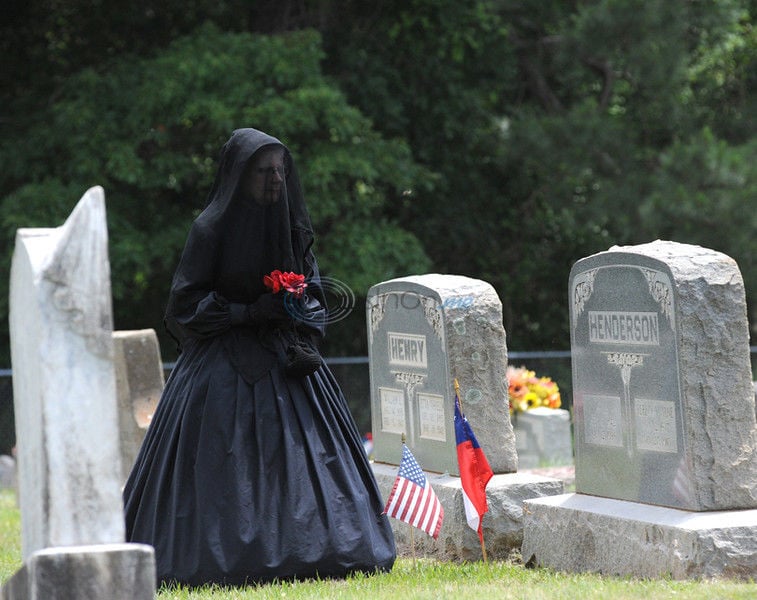 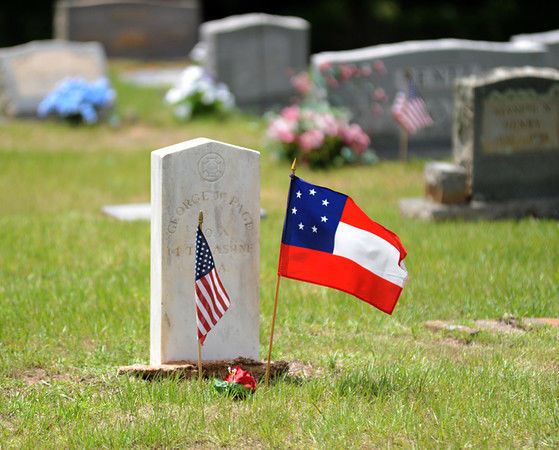 The grave of George W. Page, Co. A, 14th Texas Infantry, is adorned with an American Flag, the Confederate "Stars and Bars" flag and a rose. (Victor Texcucano/Staff) 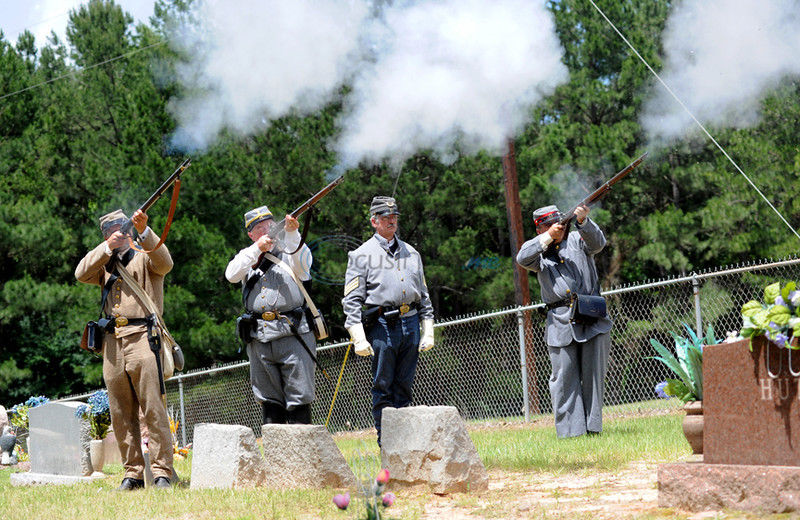 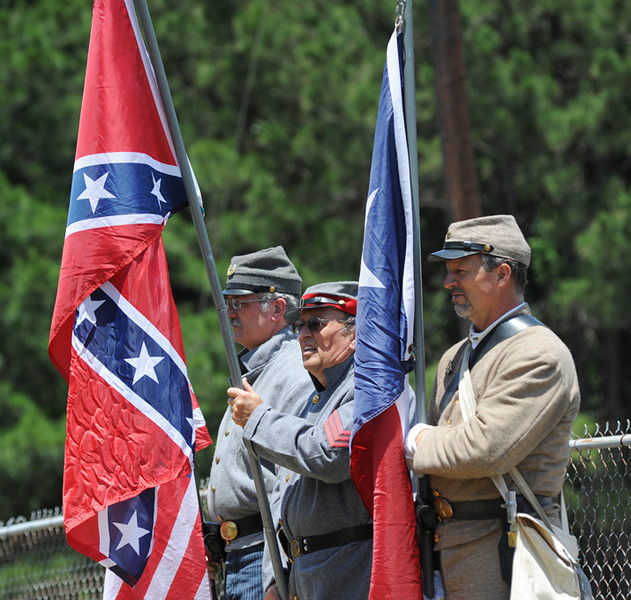 Robert Hutchenson, Mark Bassett and Mark Robinson perform the presentation of colors, including the American flag, the Confederate flag and the Texas flag. (Victor Texcucano/Staff)

The grave of George W. Page, Co. A, 14th Texas Infantry, is adorned with an American Flag, the Confederate "Stars and Bars" flag and a rose. (Victor Texcucano/Staff)

Robert Hutchenson, Mark Bassett and Mark Robinson perform the presentation of colors, including the American flag, the Confederate flag and the Texas flag. (Victor Texcucano/Staff)

About 50 people gathered in the Corine Cemetery, at the intersection of County Road 3305 and 3311, seven miles west of Jacksonville, to honor the Confederate veterans resting there.

The ceremony began with the group singing "Amazing Grace," followed by the Pledge of Allegiance to the American, Texas and Confederate flags, and the singing of the de facto anthem of the Confederacy, "Dixie."

John W. Bearden was born in Tennessee but later moved to Texas with his brother, and he joined the Confederate Army in Cherokee County, said his descendant Larry Bearden. He enlisted as a private but was a sergeant by the end of the war, which ran from 1861 to 1865.

"He said there were a lot of rough times they went through, fighting in the Confederate army," Bearden said. "He said sometimes the only thing they had to eat was parched corn, and sometimes he had a delicious stew. … (One time he was) on his second bowl when be found puppies' feet at the bottom of it."

Bearden said his great-great grandfather had seven children, but only three made it to adulthood, a testament on how hard it was during those times.

"He was an honorable man, and he did what he had to do, and what his country called upon him to do at the time," Bearden said.

R.M. Bledsoe was born in Georgia, and entered the Confederate Army in Mississippi, his great-great granddaughter Lisa Smith said.

He was sent to the surgeon for injuries possibly incurred while fighting in Tennessee, and was a prisoner of war.

Edmund C. Evans was born in Mississippi and lived in Virginia and Louisiana before settling in Texas, said Johnny Mack Tennison. He served two years in a Mississippi regiment in the war.

"He was faithful to the cause," Tennison said.

Calvin C. Henderson enlisted with the Confederate side during the Civil War in 1862 in Limestone County when he was 18 years old, said Tammy Minton. His enlistment papers described him as "a small man with a long beard and mustache," she said.

One of Henderson's arms was partially paralyzed during the war, and afterwards he and his wife settled in Cherokee County, where they raised their 13 children.

"He is another example of our great men who gave all for the cause," Ms. Minton said.

William J. King and his brother volunteered to serve in the Mexican-American War, before he served in the Civil War, his great-great-grandson Albert King said.

King was married three times and had 10 children.

"My granddaddy was a great fisherman, and I hope my great-great granddaddy loved to fish as much as my daddy, my brother and (I do)," Albert King said. "We all love to fish."

John A. McDonald served in an Alabama regiment for four years and was wounded four times. He lived the rest of his life with his wounds, Jan Patton said.

Robert R. Mitchell was born in Georgia and served under Robert E. Lee as a Lieutenant and then Captain. He later married in Tennessee and then settled in Cherokee County, Tasha Andrews said.

Abijah Mixon was born in Mississippi, and later settled into Cherokee County. He served in a Texas regiment during the war, where he was assigned as a cook in a hospital. His eldest son, John, died at the age of 12 and was the first person to be buried in the Corine cemetery in 1866.

G.W. Page settled in Panola County after his service to the Confederacy, Cindy Allen said.

"He served faithfully and never once disrespected or turned his back on the flag," she said.

His military records indicate he spent several months in the hospital and had fragile health afterward, Ms. Allen said.

He traveled to Cherokee County to visit his brother-in-law who was a doctor in 1910. He died in the county, and because of a lack of embalming technology, was buried in the Corine Cemetery instead of being sent home to Panola County, she said.

The ceremony began with women in period mourning clothing placing red roses on each of their graves and a roll call of the veterans in the cemetery by local Civil War re-enactors and Confederate color guard.

"Present on the field of honor," the men called after their name.

The color guard then fired three musket shots and a canon, with smoke plumes from the old guns wafting over the ground.