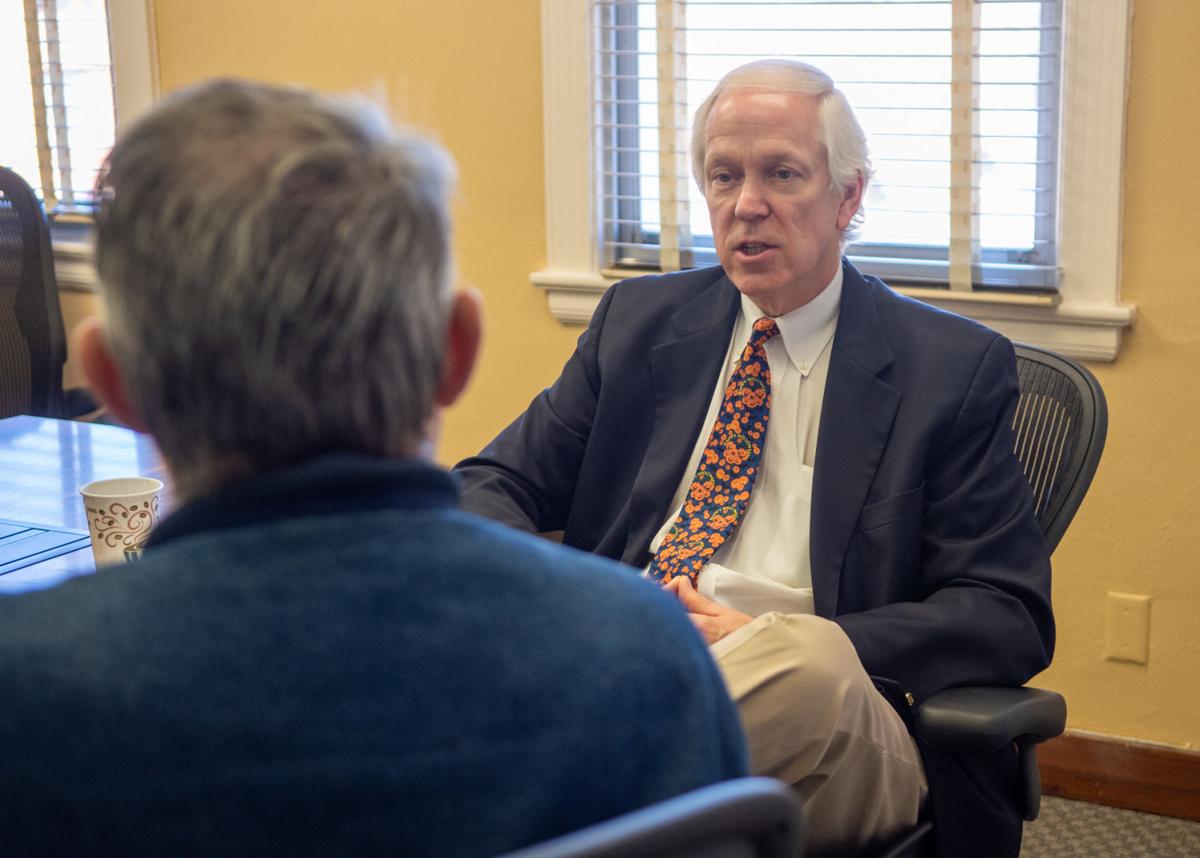 George Roberts, CEO of NET Health (right), speaks about an outbreak of Legionnaires’ disease with Tyler Morning Telegraph’s Danny Mogle on Thursday at the Tyler Area Chamber of Commerce building. 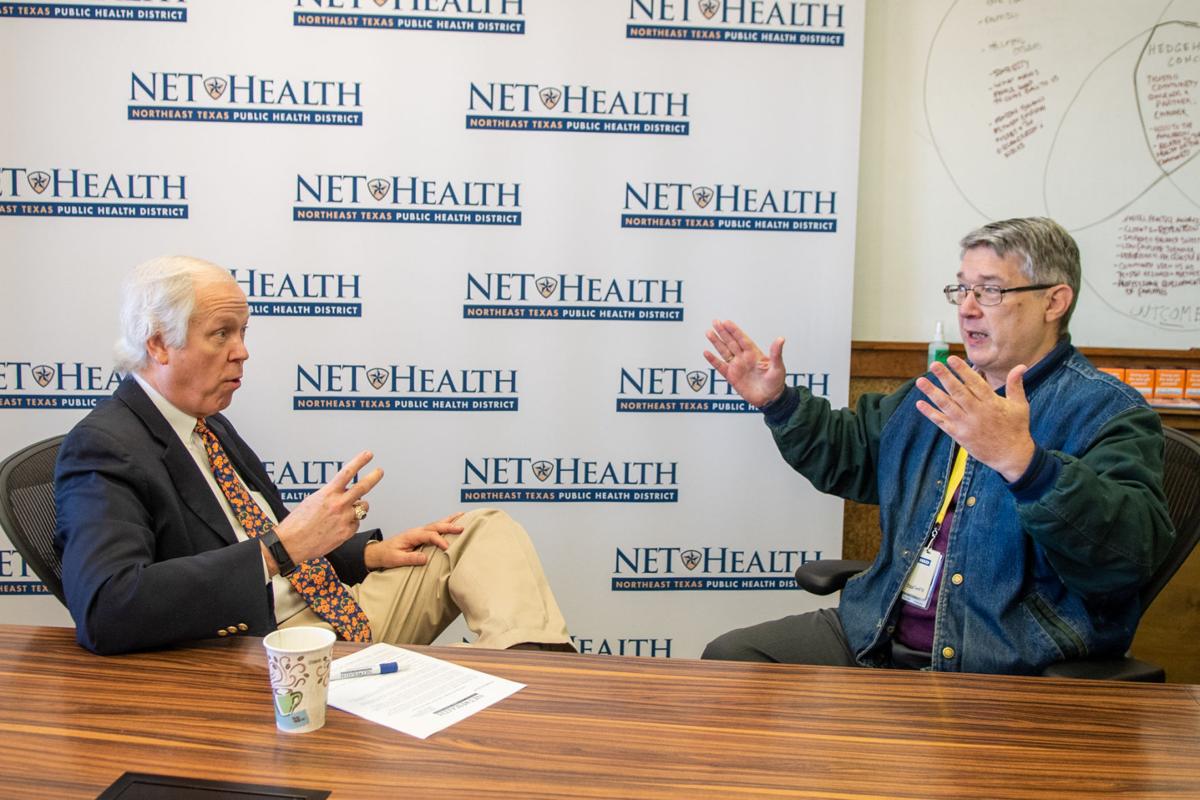 George Roberts, CEO of NET Health (right), speaks about an outbreak of Legionnaires’ disease with Tyler Morning Telegraph’s Danny Mogle on Thursday at the Tyler Area Chamber of Commerce building.

NET Health Disease Surveillance Division is working with the fair organizers and local health officials to determine connections of the cases with attending this year’s fair Sept. 20 to 29.

George Roberts, NET Health CEO, said the common element is the East Texas State Fair. NET Health is working with the Texas Department of State Health Services, the Centers for Disease Control and Prevention, event organizers and local health departments to narrow down the location within the fair.

Legionnaires’ disease is spread by inhaling water droplets in the air and caused by the Legionella bacteria, according to a NET Health news release sent out Thursday. Breathing in the water droplets can come from water in the air, steam, humidifier, cooling tower, sprinklers, lakes, rivers, streams and stagnant water.

The disease mimics pneumonia symptoms, and about 5,000 to 6,000 cases are reported every year, Roberts said.

Within a week's time five cases were noticed by health officials. Roberts said red flags come up when there are two or more cases, saying it seems unusual.

Jason Geslois, epidemiologist with NET Health, said he and other health officials ask patients about where they have traveled recently to find a common denominator of the outbreak's source. The process of narrowing down the location within the fair is ongoing, but the time frame is Sept. 20 to 29 and two to 10 days afterwards.

"Now we narrow down our scope a little further," Roberts said. "That's why we're trying to track this down."

Roberts said NET Health has a strong confidence that Harvey Hall Convention Center is safe due to the chlorine that disinfects the water for bacteria like Legionnaires' disease.

"Just because you went to the East Texas State Fair doesn't mean you have Legionnaire's disease," Roberts said.

Those with Legionnaire's are treated with antibiotics either in a hospital or in outpatient treatment.

The health district is urging anyone who attended the fair this year and is sick due to Legionnaires’ symptoms to contact their health care provider immediately.

The patient's primary clinical provider would run a urine based test to determine if the patient has been infected by the Legionella bacteria, Roberts said.

The following groups of people are at a higher risk of contracting Legionnaires’ disease: people over the age of 50, current or former smokers (cigarettes and e-cigs), persons with chronic lung disease like emphysema or COPD and those with weakened immune systems due to a previous disease or from medication.

According to the Centers for Disease Control and Prevention, about 1 out of 10 people with Legionnaires’ disease will die from the infection.

For those who live in the Northeast Texas region and have questions about Legionnaires’ disease, call Disease Surveillance Division at NET Health at 903-595-1350.

What to Know about Legionnaires' Disease

This memo provides clinicians with information regarding the increase in reported Legionnaires’ disease cases in Northeast Texas and recommendations for diagnosis and reporting.

State and local health agencies are investigating cases of Legionnaires’ disease in individuals who attended the East Texas State Fair held in Tyler Sept. 20 to 29. Public health officials are currently investigating whether and how people might have been exposed to Legionella bacteria at this event.

• Legionnaires’ disease is pneumonia caused by Legionella bacteria and is very similar to other types of pneumonia, with symptoms that include cough, shortness of breath, fever, muscle aches or headaches. Patients at highest risk include those aged ≥50 years, current or former smokers, and those with chronic lung disease (such as emphysema or COPD) or a weakened immune system.

• Pontiac fever is a milder, self-resolving infection caused by the same bacteria. Primary symptoms include fever and muscle aches.

• The preferred diagnostic tests for Legionnaires’ disease are the Legionella urinary antigen test and culture of lower respiratory secretions (e.g., sputum, bronchoalveolar lavage) on selective media. Sputum should ideally be obtained prior to antibiotic administration, but antibiotic treatment should not be delayed to facilitate this process. The urinary antigen test can detect Legionella infections in some cases for days to weeks after treatment.

• Testing is not recommended for individuals who attended the fair but do not have symptoms of Legionnaires’ disease or Pontiac fever.

• Serological assays can be nonspecific and are not typically recommended.

Physicians are required to report all suspected Legionnaires’ disease cases to public health.

These cases can be reported to the NET Health Disease Surveillance Branch at 903-595-1350.

Additional information about Legionnaires’ disease is available at https://www.cdc.gov/legionella/index.html https://epi.dph.ncdhhs.gov/cd/diseases/legionellosis.html