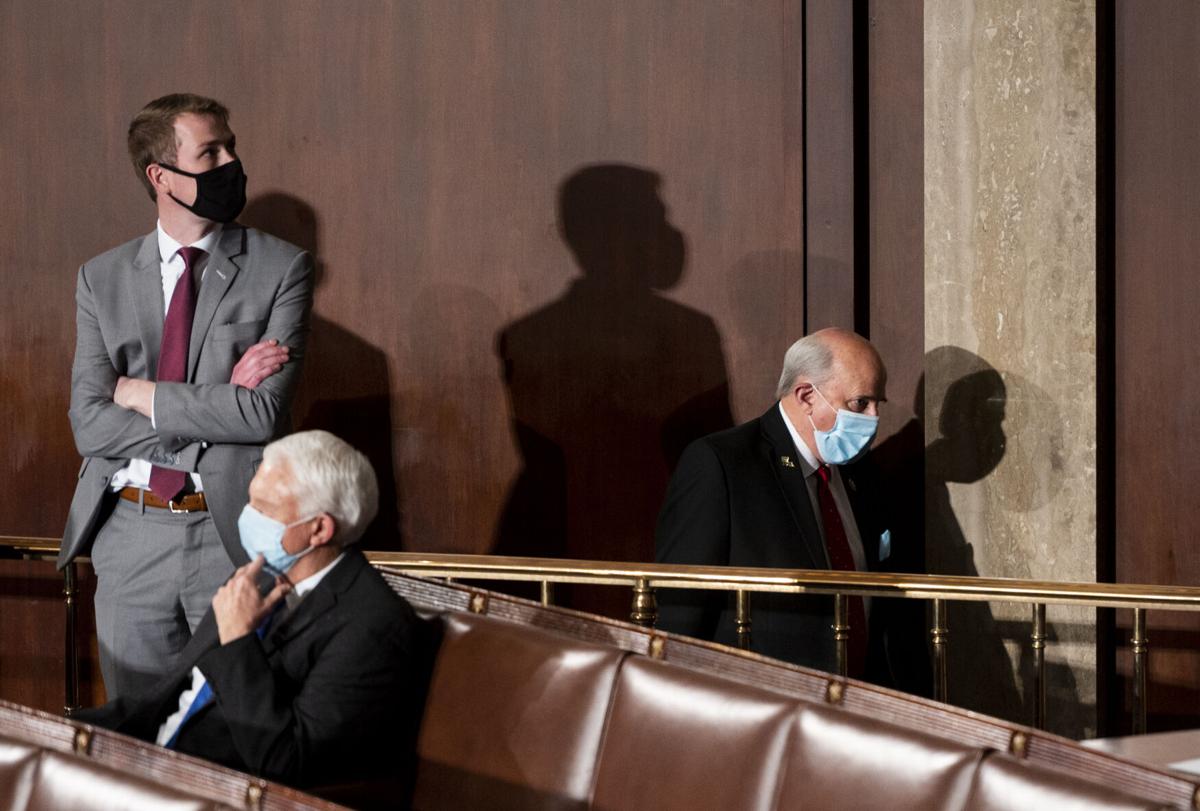 Rep. Louie Gohmert, R-Texas, arrives on the House floor during the first session of the 117th Congress at the U.S. Capitol in Washington Sunday, Jan. 3, 2021. (Bill Clark/Pool via AP) 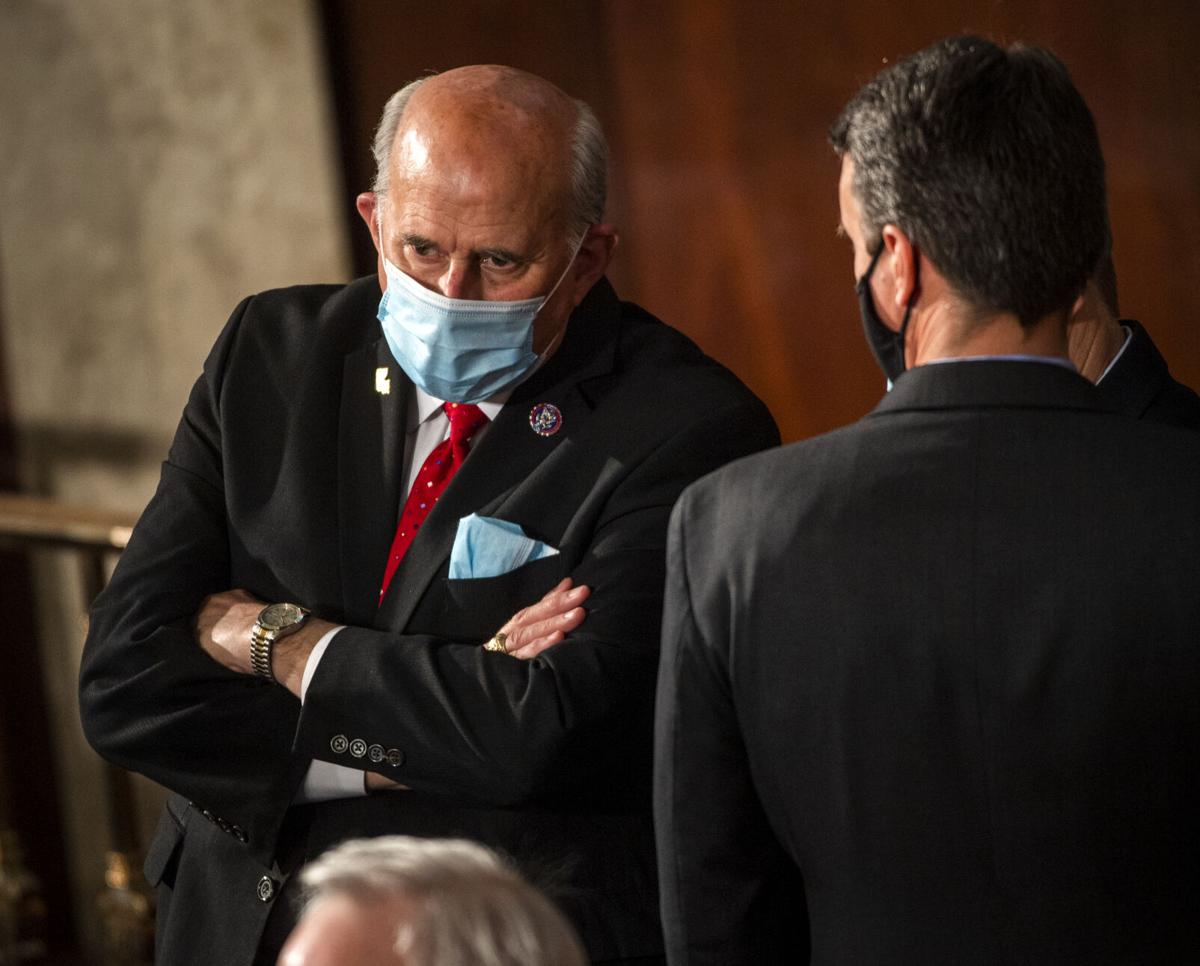 Rep. Louie Gohmert, R-Texas, speaks with others on the opening day of the 117th Congress at the U.S. Capitol in Washington on Sunday. (Bill O’Leary/The Washington Post via AP, Pool)

Rep. Louie Gohmert, R-Texas, arrives on the House floor during the first session of the 117th Congress at the U.S. Capitol in Washington Sunday, Jan. 3, 2021. (Bill Clark/Pool via AP)

Rep. Louie Gohmert, R-Texas, speaks with others on the opening day of the 117th Congress at the U.S. Capitol in Washington on Sunday. (Bill O’Leary/The Washington Post via AP, Pool)

East Texas Congressman Louie Gohmert was told to hide under his chair as the U.S. Capitol was under attack from protesters who got past Capitol Police.

“Most people realize that was probably not the best strategy; there is no way to fit under your chair on the house floor,” Gohmert told the Tyler Morning Telegraph as he was in his congressional office waiting for the floor to open back up after attempts to certify the electoral votes were paused because of the breach.

Earlier in the day, Gohmert filed an appeal in the U.S. Supreme Court to keep his lawsuit going against Vice President Mike Pence in an attempt to have Pence stop the certification of Joe Biden as president over Donald Trump until votes were certified in several states.

Gohmert said residents of East Texas were in Washington, D.C., on Wednesday as part of a rally at which Trump spoke. Gohmert also spoke to an East Texas man who was part of the group that breached the Capitol.

“I know someone who got in who was not harmed, other than they got to smell some tear gas. I’m sure he doesn’t want that out but ... he followed some of these guys,” Gohmert said. “I hope they find out, from looking online. It’s just strange bedfellows. We need to get to the bottom of who started that. Once it starts, people who are good people can be pulled into doing things they wouldn’t ordinarily do.”

“As you knew, there were a lot of people coming here and a lot of people coming from East Texas and there was going to be a big protest, and that’s fine,” Gohmert continued. “The problem is when it gets violent. It was so staggering to me because the people that I knew who came up here (from East Texas) are extremely non-violent. They wanted to peacefully protest and that’s what I advocate.”

Gohmert said he’s been criticized for his comments on violence, but he said it was a warning to let the votes be counted without violence.

“Knowing so much history, I have tried to sound the warning that when our institutions, that were created to resolve disputes civilly, refuse to take up the disputes, it leads to violence. I did not advocate violence,” Gohmert said. “I continue to say Dr. (Martin Luther) King showed the best strategy is a peaceful strategy.”

Gohmert said of the protesters, “You probably saw the pictures online. One person looks like he has a hammer and sickle, others say it’s a gamer, but others I see him pictured with socialist leaders and skinhead leaders in one picture. The guy with the horns looks like he’s a big climate change guy trying to push for climate change.”

He said it was too much for the police to handle.

“I said it’s going to be a busy day for you guys. They said everyone was coming in, all the Capitol Police. And they do a great job. but it turns out when you get the Capitol surrounded by thousands and thousands of people, there’s not enough Capitol police,” Gohmert said. “You need park police, you need D.C. police and in this case, they brought in the National Guard and it seems to be holding tonight.”

Hector Garza, an officer in the Smith County Democratic Club said, “This is an unprecedented day in our history and lives, I cannot remember a time in my long life when our Nation’s Capitol and our Founding Fathers have ever been questioned, stormed, attacked, and demeaned in this manner. Be it for political, personal reasons or simple hatred, ignorance or beliefs. We as a nation have allowed a single demagogue to culminate into what I think is nothing short of a terroristic act. Are the Trumpsters concerned about our Constitution or the Rule of Law? I say the extent to which they are protesting is equal to those in power have used to abuse and diminish our Constitution.”