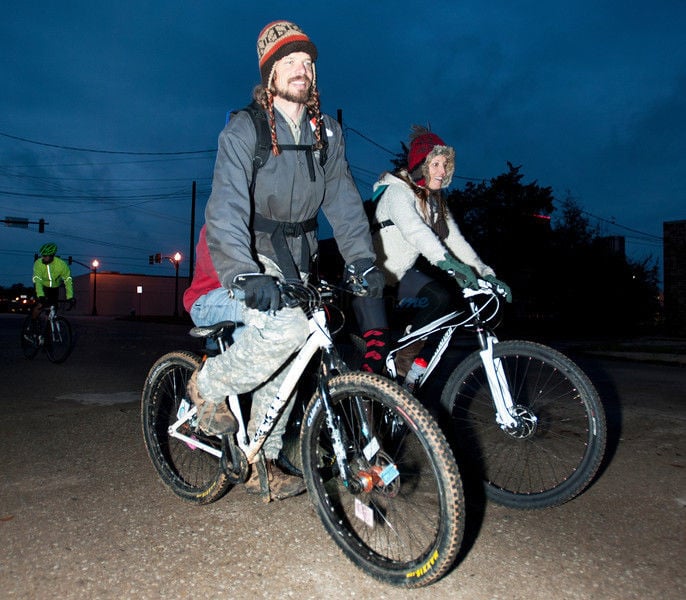 Nevada Thomason, left, rides off after the "Cranksgiving" bike ride delivers food to the Benevolence Center of the West Erwin Church of Christ on Saturday afternoon. Herb Nygren Jr/Staff 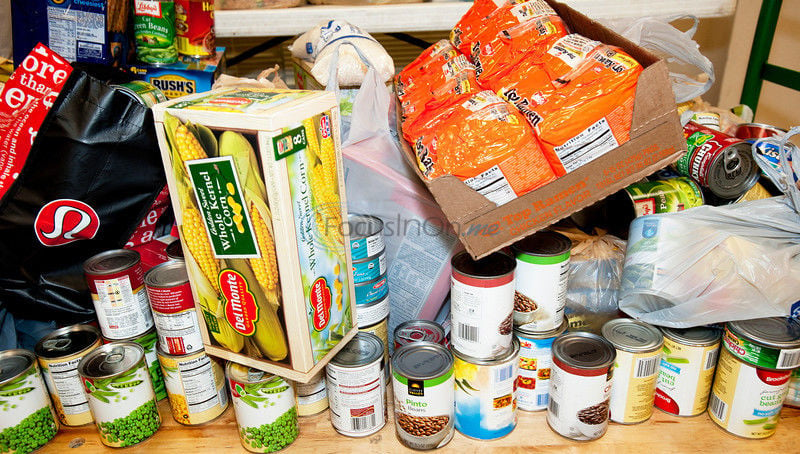 Some of the food donated to the Benevolence Center of the West Erwin Church of Christ by the bicycle riders in the "Cranksgiving" bicycle ride Saturday. They provided Thanksgiving meals for families and 413 pounds of canned goods, dry goods, and other food. Herb Nygren Jr./Staff

Nevada Thomason, left, rides off after the "Cranksgiving" bike ride delivers food to the Benevolence Center of the West Erwin Church of Christ on Saturday afternoon. Herb Nygren Jr/Staff

Some of the food donated to the Benevolence Center of the West Erwin Church of Christ by the bicycle riders in the "Cranksgiving" bicycle ride Saturday. They provided Thanksgiving meals for families and 413 pounds of canned goods, dry goods, and other food. Herb Nygren Jr./Staff

About 20 bikers braved a cold rain — bearing groceries for the needy on a ride Saturday in Tyler — from the Elite Bicycles bike shop on Shelley Drive to give the food to West Erwin Church of Christ's Benevolence Center.

The center in turn plans to distribute the groceries to needy families.

The bikers provided full Thanksgiving meals of turkey, dressing and trimmings for three families. They also provided 413 pounds of canned goods, dry goods and other food.

The ride was called the seventh annual "Cranksgiving Event."

Its name is a "play on words" for Thanksgiving and the crank that turns the pedals on a bicycle, Joe Self, manager of Elite Bicycles, said. The crank is a piece that drives the chain, which in turn drives the rear wheel.

The charity bike ride was started by New York City bike messengers in 1999, combining a bike ride and food drive into one event.

Elite Bicycles headed up the Tyler event, spreading the word among local bikers.

It attracted bikers whose ages range from young children to adults of various ages.

"Anybody with two wheels or even three wheels can come out and do it every year," Self said. "You don't have to be a racer or a guy that does tricks. It's for everybody."

Some bikers carried food in backpacks, some pulled a trailer loaded with food behind their bicycle and some just stuffed food in their pockets.

"We tell people to bring canned food or whatever they can carry. Everybody goes on their own to a grocery store and picks it up and comes for the ride. It's good fellowship and it's a good thing for the community," Self said.

"Ideally, helping other people in need is what we should be doing. That's the main thing to help other people."

Jason Reeves, minister of West Erwin Church of Christ, said, "Of all the places they could have gone in the city, they chose us. That's a very humbling thing and we're very appreciative. There's a lot of folks in our city that are going to benefit from them bringing this (food) here and choosing to be a part of our outreach center."

The church's benevolence center provides food, clothing and other services to approximately 150 people per week and also refers needy people to other places in the city that can aid them, the minister said.

The bikers like to assist an agency every year around Thanksgiving whether the weather is good or bad, Gary Prater, who rode with the group, said.

Another biker, Jon Bailey, said, "It's a good cause. I like doing outdoors things. I can have fun and do something good at the same time."

Aristeo Rodriguez, who brought 20 pounds of food in his backpack, said, "We are helping people out tonight. We are supposed to help each other."

Pam Prater and her husband, who pulled their 3-year-old daughter in a buggy behind their bikes, said, "We're very fortunate and we always want to give back and try to involve her so she will get the idea that it's important to give back to help others that are not quite as fortunate as us."

The event, Self said, also provided "good fellowship" for the bikers, who hung around after delivering the food, to chat. Then they rode back together to the bike shop. It was about a 6-mile roundtrip ride.

"It's one of those things where it feels good to do good for others," Self said.