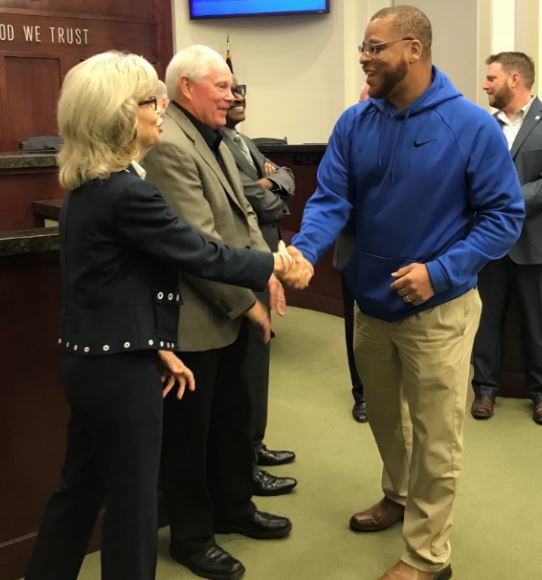 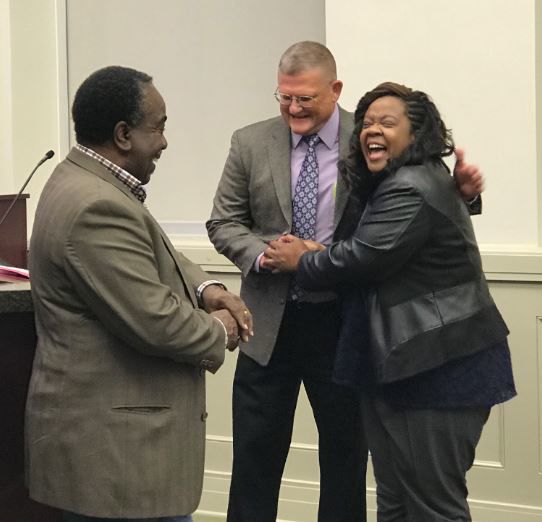 Leroy Sparrow and Shirlene Black, two of Tyler’s Solid Waste employees, were recognized with the Blueprint Blue Ribbon Award at the City Council meeting on March 28 for their collaboration, innovation, customer service and strategic focus.

In the last eight years, Leroy Sparrow has served in capacities as Vehicle Services Manager, Transit Interim Manager and is now currently serving as the Solid Waste Manager. He graduated from City University’s Leadership Academy in 2011. Sparrow serves as one of the city’s representatives for Tyler Transit for the Disabilities Issues Review Board for the East Texas Human Needs Network, which focuses on transportation needs in the Tyler community. He also serves as a mentor in the Mayor’s Mentorship Achievement Program. His most recent accomplishment was the implementation of the ADA Visual and Audible announcing system for bus stops.

“He has learned to be a ‘boots on the ground’ supervisor,” said Director Russ Jackson. “If the need arises, he will be seen out driving trash trucks with his employees. He consistently demonstrates the Called to SERVE spirit by being willing to take on additional tasks thrown at him. He understand that to be a good leader in the City, you must be willing to work hard and wear many different hats.”

Shirlene Black is the Solid Waste customer service supervisor. She graduated from City University’s Leadership Academy in 2015 and serves as the city’s liaison for the city of Tyler Rosa Parks Day event, making it one of the most talked about events for the last two years. In addition, she has been a part of the Solid Waste team that has been nominated for six years in a row.

“I call her ‘The Voice of Tyler,’” said Jackson. “She has always maintained a calming affect while dealing with our customers. In fact, she was instrumental in turning around several customer service issues.”

The Blueprint Blue Ribbon Award recognizes employees who have placed the highest premium on responsiveness to citizen’s needs. The Blueprint Blue Ribbon Program began in 2004 to recognize exceptional employee performance. Ideal candidates for the award are employees whose ideas or suggestions have improved productivity, saved money, improved efficiency or improved employee morale.

“We sincerely thank these public servants,” said Mayor Heines. “They’ve given so much time, dedication, sweat and tears to our organization. Hitting these milestones is something we don’t take for granted.”

The employees and their time of service recognized are as follows: