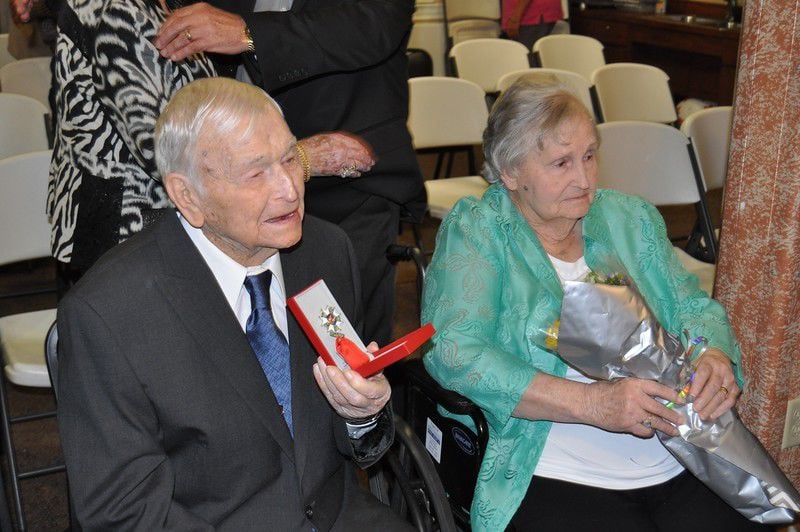 World War II veteran Hubert Martin sits next to his wife, Lois, during a ceremony Sunday to recognize Hubert with the French Legion of Honor. 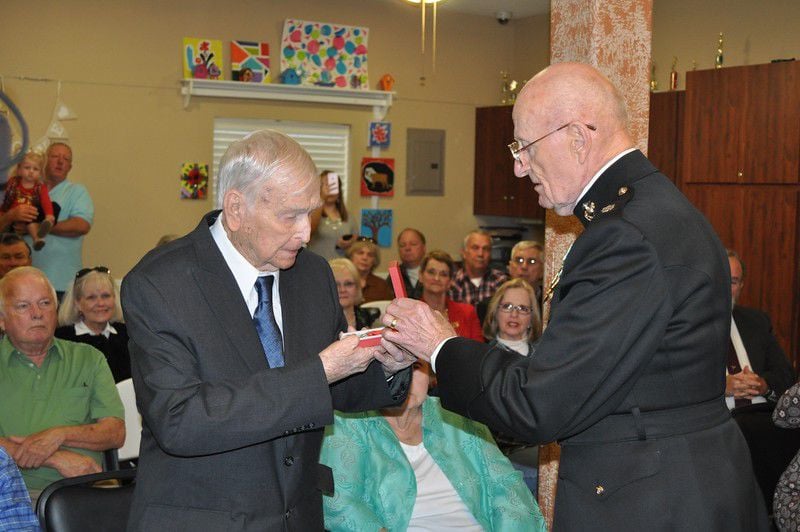 Hubert Martin, left, is presented with the French Legion of Honor by retired Marine Corps Colonel Lt. John B. Christie.

World War II veteran Hubert Martin sits next to his wife, Lois, during a ceremony Sunday to recognize Hubert with the French Legion of Honor.

Hubert Martin, left, is presented with the French Legion of Honor by retired Marine Corps Colonel Lt. John B. Christie.

An Athens World War II veteran, Hubert Martin, 95, was inducted as a knight in the Legion of Honor, the highest decoration bestowed by the French government, during a special ceremony this week at Oak Wood Place Assisted Living facility in Athens for his service in helping liberate France during World War II.

Retired US Marine Corps Lt. Colonel John B. Christie presided over the presentation more than 70 years after Martin was wounded on Christmas Day during the Battle of the Bulge in December 1944 while serving with General George S. Patton Jr.'s Third Army. The Legion of Honor is an order of distinction first established by Napoleon Bonaparte in May 1802.

“Today, we are in the company of a hero,” Christie said Sunday. “A hero shows conspicuous courage. I think my own definition of courage is the fortitude to stay one minute longer, even when you know the result of staying is in question. In other words, you may die, but you stay.”

Christie said the Consul General of France in Houston, Sujiro Seam, sent a letter conveying the thanks of his nation to Martin and those like him who battled the Germans to liberate France and eventually Western Europe during World War II.

“Your sacrifice was not in vain,” the letter states. “The Allied cemeteries on French soil are a constant reminder of the endless debt of gratitude to those thousands of soldiers who were wounded or perished fighting for our freedom.”

The award makes Martin a Chevalier (knight) in the French Order of the Legion of Honor. He has previously been awarded the Bronze Star, Purple Heart and five other U.S. decorations. He also holds the rarely awarded French Fourragere for heroism.

Martin enlisted in the US Army in 1942 and served as a Private First Class in the 53rd Armored Infantry Battalion in Patton's Third Army. In the latter months of 1944, Patton's army was quickly slicing across France.

Christie said, on Dec. 16, 1944, the Allies believed the German war appeared to be in the throws of defeat.

“They had no capability for offense any more,” Christie said. “They would simply fight in defense of their homeland and eventually they would lose that too.”

Martin remembers his fellow soldiers had a quick change in their Christmas plans.

“On Christmas Day they were going to fix us a big Christmas dinner,” Martin said. “Instead, they loaded us in half-tracks to go the 100 miles back to Bastogne. I don't know what time we got any sleep.”

A half-track is a vehicle with regular wheels at the front for steering and continuous tracks at the back to propel the vehicle and carry most of the load. They're useful for traversing soft terrain, like mud and snow. The Third Army saw plenty of those during its drive across Europe.

On Christmas Day, Martin and Patton's division were headed north. Martin was walking alongside a tank when a shell hit the vehicle.

“The resulting shrapnel from that tank hit Hubert in the forehead and wiped out half of his mouth,” Christie said. “He's lucky to be alive, but thank God he is.”

Martin said he remembers walking next to the tank and then coming to afterward.

In turning back the German assault, American casualties at the Battle of the Bulge were the highest in the war, Christie said.

Nearly 100,000 American soldiers are either killed or wounded in the intense fighting. Nazi losses were even greater, with more than 500,000 casualties including 100,000 killed.

Today, fewer of the men like Martin, who survived the battle, are still around to tell about it. During the ceremony, Christie presented Martin's wife, Lois, a bouquet of flowers.

“They've been married almost as long as I've been alive - 70 years,” Christie said.

The event began with prayer and the crowd standing for the playing of “La Marseillaise” and the “Star Spangled Banner,” the national anthems of France and the United States.

“It was a good ceremony,” Martin said. “I appreciate that so many people came out to see it.”