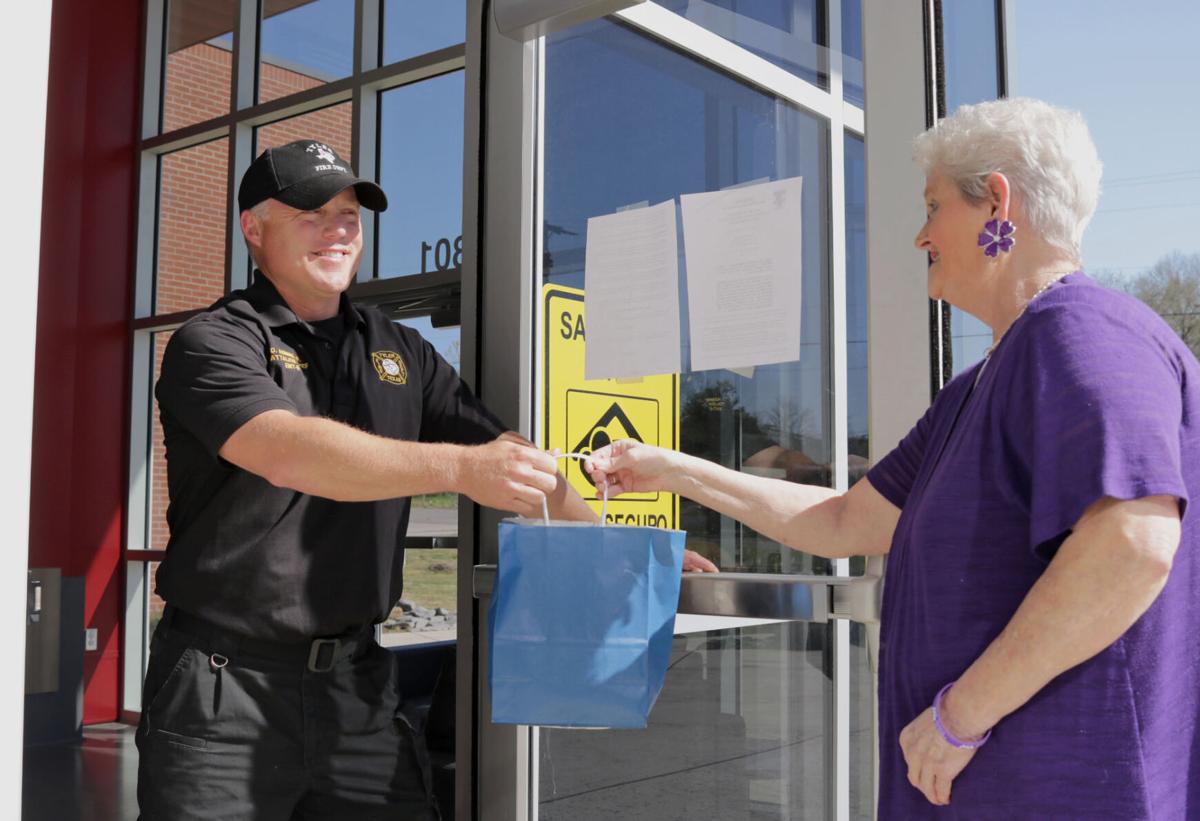 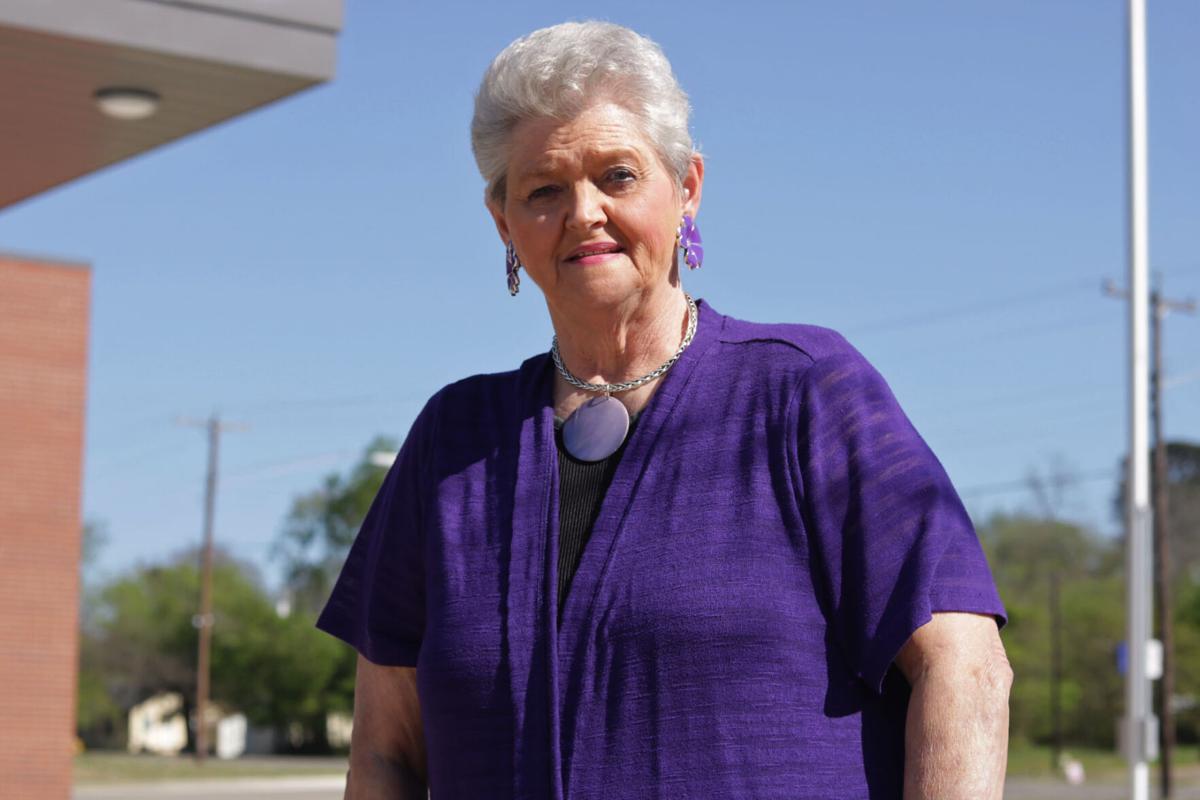 Carol Swanson was honored during the 2021 Tyler Women luncheon in March. Swanson poses after giving treats to the Tyler Fire Department. 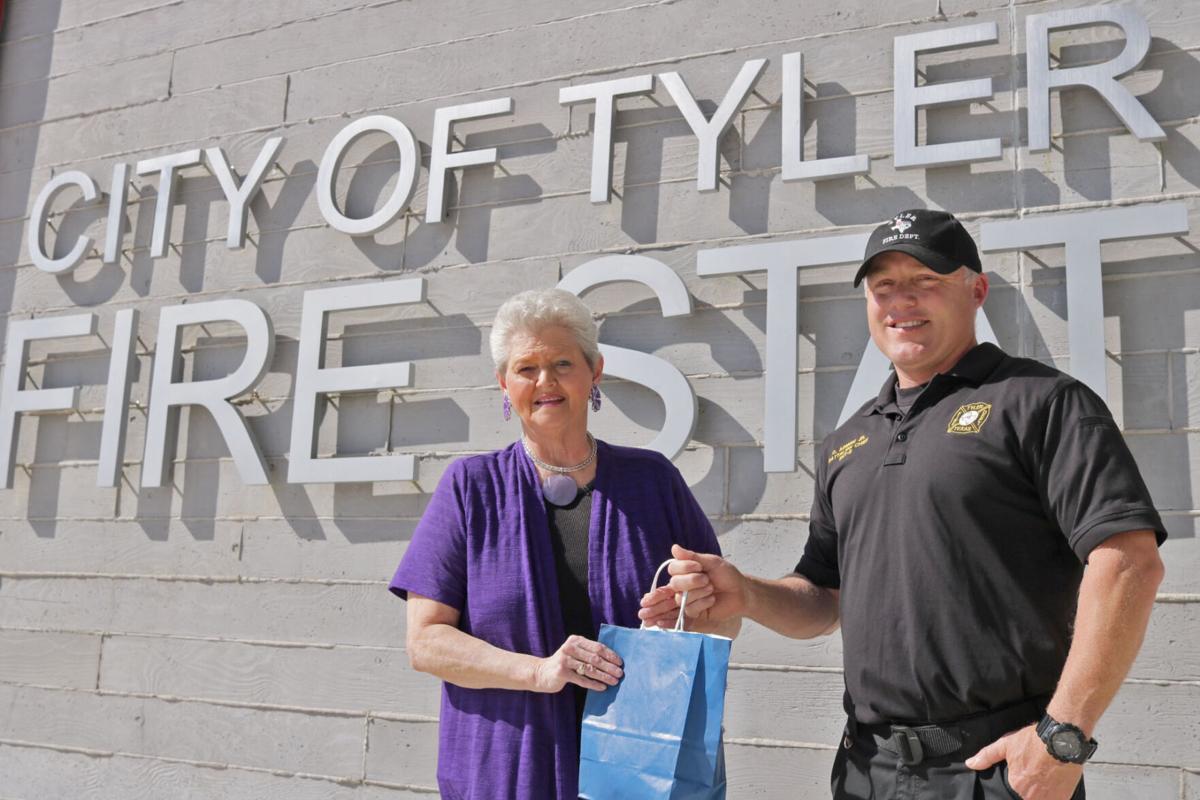 Carol Swanson was honored during the 2021 Tyler Women luncheon in March. Swanson poses after giving treats to the Tyler Fire Department.

At 11 years old, her father passed away from leukemia, leaving her stay-at-home mother to provide for herself and her older brother. As she saw her mother become a working woman, Carol Swanson grew up with that role model in her life.

Although her mother was busy working and raising a teen and a tween, she somehow always found a way to volunteer her time to her children’s school parent-teacher organizations. Her mother dedicated her time to volunteering, and Swanson would grow up to do the same.

Swanson, now 74, suffered from bulimia as a child, which was a result of experiencing loss and abuse at an early age.

Later in life, she was diagnosed with life-threatening cirrhosis of liver, but she’s managed to turn every negative into a positive, from sharing her experiences at crisis centers, to writing a book to help people forgive titled, “In Prison Without Bars.”

“I felt like I learned a lot. Not by things I’ve read in books, but by experience. Never give up. I don’t care what you’re going through. I’ve been through cancer twice, I was told nine years ago I have a life-threatening condition. As long as I’m here on earth and keep on, I’m going to give back. I don’t know if it’s because my mom taught me to be this way, or I’m doing it now, in honor of my mom because she died almost seven years ago,” Swanson said.

Gertude, Swanson’s mother, was 90 years old when she passed away. Swanson recalls she always had a positive attitude.

For Women’s History Month, the Women in Tyler organization recognized Carol Swanson for her volunteerism. The event was canceled last year because of the pandemic, but Swanson was able to celebrate her recognition this March.

“I was so honored to be selected to be (a Woman in Tyler) because when I do something, I do it out of the heart. I don’t have to have recognition about anything. I do it because I want to and it’s out of my heart,” Swanson said.

Born and raised in Tyler, Swanson graduated from John Tyler High School in 1965. She pursued a career in cosmetology to learn how to do hair and nails.

A few years later, Swanson became a mother to two daughters, Melissa and Teresa, who inspired her to volunteer and spend time at their schools as a volunteer.

Through volunteering and having her career as a cosmetologist, Swanson dedicated the next years of her life to being a teacher’s aide with children with disabilities at Tyler ISD until she was 72 years old.

“I loved children. When I decided to retire, I was at the age of 72. I knew it was time to stay home. My husband is older than I am and he has been diagnosed with dementia, 11 years ago. I stay with him now and we have a lot of fun during the day. We watch TV, play cards, we play what we call ‘Go Fish,’ it’s a children’s game. He wins nearly every day and he loves it. This is what is keeping him going,” Swanson said.

“I learned so much in life from these students, but for 25 years, I really enjoyed what I was doing,” she continued.

Swanson also said that if she hadn’t been 72 years old, she wouldn’t retire just yet, but at the time, she truly felt her time at TISD was done.

Although she had a change of career, her 25 years of experience in cosmetology came in handy years later in the early 60s, when Swanson began to volunteer at Hospice of East Texas. Every Thursday, she visited those living there to style their hair and perform manicures and pedicures during their end stages of life. She had previously volunteered at a hospital in the emergency room, trauma support team and in labor and delivery.

“I know what it was like to lose a loved one, which was my father. For three years, I went out to Hospice of East Texas, and I had been a cosmetologist, so I went out there every Thursday to style hair, do manicures and pedicures for women and men during their end stages of life. I wanted the families to see them in their end stages like they were used to, not with their hair not styled or fixed, because the men needed to be shaved,” Swanson said.

The hardest patient to take care of was a 52-year-old woman, who she found out one day, was her doctor’s wife.

“I did not know that was one of my doctors’ wives. I went out there to go in her room and he was sitting in her room. I looked at him and I saw her last name and I said, ‘Wow, you’re related to my doctor,’” she said.

That was when Swanson’s doctor introduced her to his wife.

“That was so hard. She was so remarkable. Two weeks later, I went back to do her hair but she had died that morning at 4 a.m.,” Swanson said.

Another person she recalled was a 28-year-old woman who had been beaten up by her boyfriend.

“She was a victim from domestic violence and that was so hard, because when I worked at the crisis center, I use to go out on family violence and suicide calls,” Swanson said.

Swanson has been a domestic violence and abuse advocate for most of her adult life. She volunteered at the East Texas Crisis Center in the late 1980s, where she even had a gun pulled out on her.

Swanson recalls that at the high school, the perpetrator got out of their car and pointed the weapon toward the sheriff and toward herself.

“If it wasn’t for the law enforcement there that day, I don’t know what could have happened. I owe a lot to them, I really do. That’s one reason I like to give back to them. I bake cookies, take them candy bags that I put together and I attend the Coffee with Cops at one of the restaurants here, they used to do that. I go and I thank them for everything they do, because I don’t think they’re appreciated as much as they deserve to be,” she said.

Even after having a gun pulled out on her, Swanson kept volunteering at the crisis center.

“I felt like my time of doing things like this was not over. I just felt like that’s something I still need to do. There’s still time to do things as long as I’m here on Earth,” she said.

After that instance, she even went into an apartment to talk to a young man who was contemplating suicide.

“I asked him to put the gun up, go get his Bible and let’s talk. I stayed there for two hours,” she said.

Around the same time, Swanson went into a procedure for a hysterectomy. At the time of the surgery, the doctor found nine malignant tumors, as well as 18 malignant polyps in her colon. She was diagnosed with cancer. Luckily, she didn’t need chemo or radiation.

“I was shocked because the doctor didn’t know I had cancer until he went in to do the surgery. That shocked me. My dad had leukemia, which is cancer also, so I just knew how important it is to keep going to the doctor. Nine years ago, I was told I had cirrhosis of the liver, non-alcohol related. When I was diagnosed with it, I didn’t give up,” she said.

Swanson said her specialist in Dallas told her she could live with cirrhosis for 15 to 20 years.

“Until I’m gone, I’m going to keep on doing what I’m doing, just trying to have a good time with people, the senior community, I’m one of the seniors. I just want to give back,” she said.

After being diagnosed with cancer, at 56, Swanson had a heart attack.

“I had just gone and gotten my pedicure and a manicure, which I never had, but somebody treated me to that. When I left, I started having chest pains. I pulled over, called 911 and got to the hospital,” Swanson said.

When she went to the cardiologist, she was told to enroll into an exercise program to help keep her on track and become more active. This is when she began tap dancing.

“I love to dance. The dance teacher I had led me to form a group of ladies my age. Here we were in our 50s, some a little bit younger, and we won regionals and nationals in tap dance to ‘The Little Old Lady from Pasadena’,” Swanson said.

While her tap dance group took off and won regional and national awards, Swanson eventually had the opportunity to tap dance on stage with the late celebrated tap dancer Gregory Hines at UT Tyler in 2002. The largest crowd she had ever performed for was about 600 people.

From tap dancing to “The Little Old Lady from Pasadena,” Swanson began a comedy act, one she would do for 16 years. She took her comedy act to senior homes, but the COVID-19 pandemic put a stop to her show. She hopes to resume her show when things get better.

“I’ve always liked comedy because I feel like they need more laughter in their life,” Swanson said.

Swanson met a friend who was the state director of the Miss Texas Senior America Pageant. For four years, Swanson was invited to be in it. She also received the state volunteer service award. She completed over 2,000 hours of community volunteering one year.

“I didn’t do my volunteer work to get this award, I had been doing it for years and years,” she said.

The pageant aims toward redefining the senior woman instead of focusing on beauty. Through the Miss Texas Senior America Pageant, Swanson made friends across the country.

Today, Swanson has made it a habit to visit local police and fire departments, as well as other local businesses, to drop off freshly-baked cookies and candy bags.