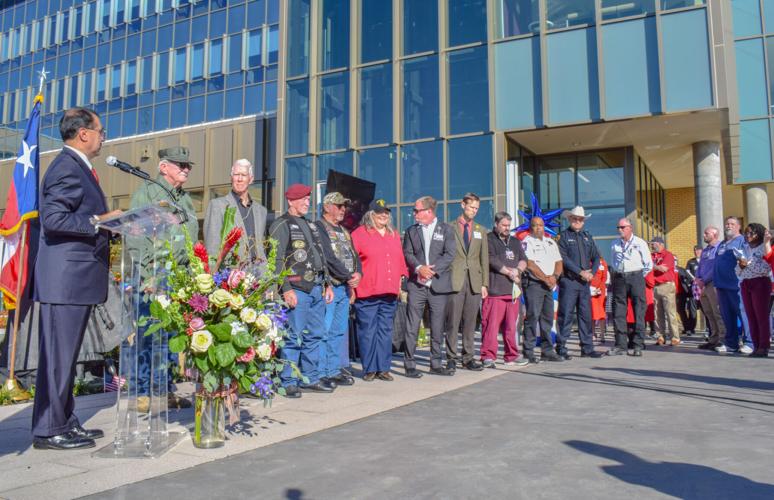 One member from each branch of service, including U.S. Army, Navy, Air Force, Coast Guard and Marine Corps, stands before the audience Thursday at Christus Trinity Mother Frances Hospital in Tyler for a special Veterans Day ceremony honoring them and those who have lost their lives while serving their country. The group was among the first to enter the hospital for the unveiling of the new tribute wall honoring all who have served as well as first responders. 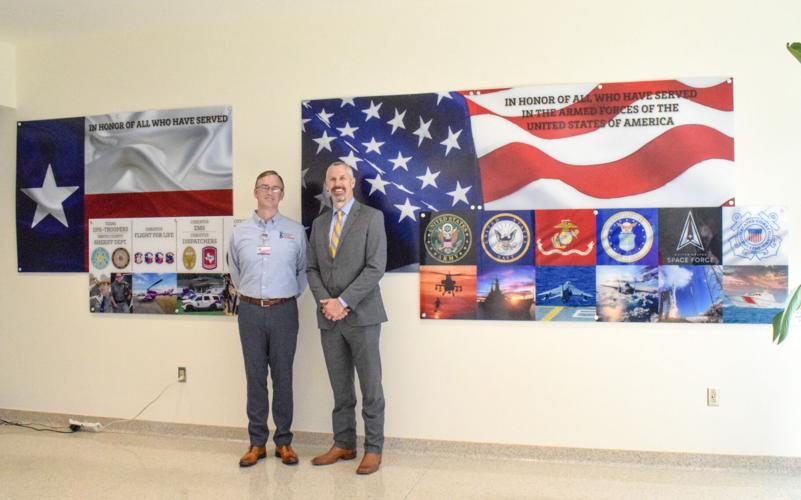 One member from each branch of service, including U.S. Army, Navy, Air Force, Coast Guard and Marine Corps, stands before the audience Thursday at Christus Trinity Mother Frances Hospital in Tyler for a special Veterans Day ceremony honoring them and those who have lost their lives while serving their country. The group was among the first to enter the hospital for the unveiling of the new tribute wall honoring all who have served as well as first responders.

After a ceremony featuring special guests, the Tyler hospital revealed the wall dedicated to all those who serve, including those in military service but also first responders, police, firefighters and more.

Christus Mother Frances Hospital Ministry President Jason Proctor spoke at the ceremony, remembering a late family member, James Hurst, of Savannah, Georgia, who fought in World War I. Proctor said the family has kept a 100-year-old handwritten document from the U.S. Army that lists details on when Hurst left to serve his country. The document is accompanied by a letter Hursts’ parents received from the Army informing them the 19-year-old had died in the trenches of France as a result of a gas attack.

“He never got to experience life as many of us do,” Proctor said. “He went, he volunteered, he served and he paid the ultimate price. I’m grateful today to be able to remember my relative James Hurst and hopefully he knows he’s not forgotten.”

Proctor then welcomed State Rep. Matt Schaefer, R-Tyler, a retired Lt. Commander of the U.S. Navy Reserve, whom he called a friend of the hospital and of the people of East Texas.

“COVID has been tough on the hospital world… I can tell you, without any doubt, if it weren’t for the efforts of our next speaker (Schaefer), people of East Texas would’ve been worse off. People of East Texas would have died in larger numbers. He really went on for weeks to ensure our folks in East Texas had what they needed, from equipment, to supplies, to helping us get nurses,” Proctor said.

Schaefer thanked healthcare professionals and led the pledge of allegiance.

“As someone who’s been to Afghanistan, around the world, as a member of the Navy, that flag, that symbol — still — when it’s seen, strikes fear in the hearts of our enemies and warms the hearts of our friends and it is worthy of us today honoring our flags,” he said.

Following the ceremony, the public and guests were surprised to know there was one more component to the Veterans Day program.

The tribute wall, located inside the Christus Mother Frances Hospital in Tyler, is dedicated to all veterans, including nearly 300 of those, who are associates of Christus Health.

“It was just our way to recognize, honor and thank them for their service,” Navarro said.

With the expansion of the Tyler hospital’s front lobby, Navarro said there was an opportunity and space needed that allowed the hospital to appropriately honor veterans.

“It’s our way of also honoring our associates, our nurses, doctors, physicians, anyone who works for us who’s a veteran, we want to take a moment and thank them for their service,” he said.

“We can never do or say enough to thank them for their service, so for many of them, they’ve given the ultimate sacrifice of their lives. We thank them, we thank their families,” Navarro said.

Closner said the wall shows what Christus is supportive of.

“This is an expensive project. It took a lot of work, so being a vet myself, I appreciate the fact that, as an organization as large as Mother Frances, that they’re doing that,” Closner said.

“There are so many veterans that live here in Tyler and Smith County … The service of these men and women will always be honored and I’m very thankful that Christus is doing this,” Schaefer said.

A special tribute wall was unveiled Thursday as the Christus Trinity Mother Frances community gathered to honor veterans. After a ceremony fea…