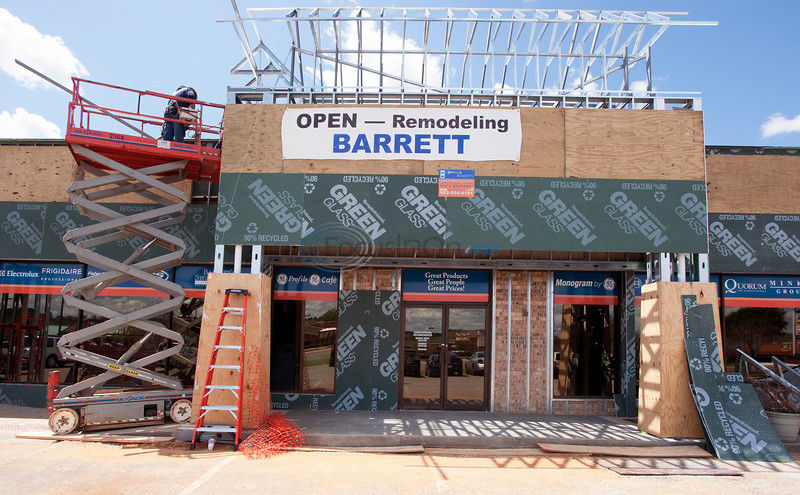 Barrett Lighting is open while the Epperson Plaza is being remodeled. Herb Nygren Jr./Staff

An artist's rendering shows what the Epperson Plaza will look like when it's remodeled. (Courtesy) 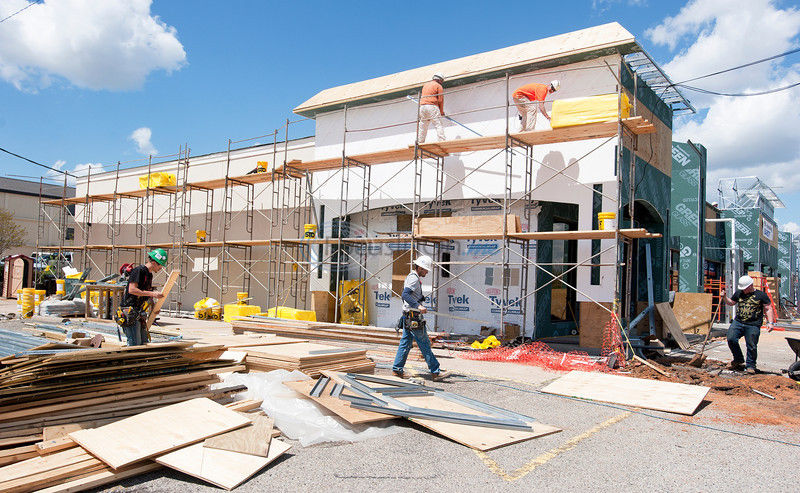 Barrett Lighting is open while the Epperson Plaza is being remodeled. Herb Nygren Jr./Staff

An artist's rendering shows what the Epperson Plaza will look like when it's remodeled. (Courtesy)

Passersby driving down South Broadway Avenue might notice a 35-year-old retail center getting a new look.

Epperson Plaza, at 5625 S. Broadway Ave., was built in 1978 by the late Maurice and Lila Epperson to house their business, Broadway Lighting Center.

Since then, the building has been sliced several times, and now is home to three businesses — Barrett Appliance & Home Products, MotoPhoto & Café Portraits and EZ Loans — and with a vacant space for another.

Patricia Potts, 64, Tyler, bought the center in 1990 from her parents.

She said she decided to renovate the center because it's been the same for so long it's become almost unnoticeable. She hopes the renovations will make it more approachable and thus, better for the city, she said.

She brought in Matthew Marshall and Casey Hymer, of Drake Real Estate & Investments, to help redevelop the center after seeing work they had done to two centers farther south.

Barrett Appliance & Home Products, which takes up about 8,000 square feet, fills more than half of the space and is the anchor tenant of the strip. EZ Loan is in a 1,300-square-foot space, and a 1,375-square-foot vacant spot will most likely be leased to retail, he said.

Construction started with demolition during the first week of March, and although there have been rain delays, the project is on time, Marshall said. He expects it to be completed in about two months.

MotoPhoto & Café Portraits, which has been at that location since the 1990s, will leave the center after its lease expires in early 2015, Marshall said. Once MotoPhoto moves out, it will open 2,450-square-feet of space with a potential drive-thru for rent, he said, adding that they will probably lease it to a restaurant. He said MotoPhoto has been a great tenant throughout the years.

Maurice and Lila Epperson co-owned Dement Lighting for a few years until they bought the property on South Broadway Avenue in 1978, going out on their own to construct the building and open Broadway Lighting Center, Ms. Potts said.

In the mid-1980s, Epperson began getting requests from other businesses to rent out some of the space that once entirely housed the lighting company. Lave's Jewelry began renting out two spaces, one for a store and the other for an office, on the north side of the center while a pizza place was on the south side for about 10 years, Ms. Potts said.

In 2003, after working for the lighting store nearly all of her life, she decided to retire. She sold the business to Barrett Appliance & Home Products.

Barrett Appliance & Home Products is much more than a lighting store.

Wayne Trammell, 68, territory manager and outside sales person for Barrett Appliance & Home Products, has worked for the Bossier City, La.-based business for 18 years and opened the Tyler store in 2003.

He said Wayne Barrett bought what was Broadway Lighting Center from Ms. Potts and changed it to Barrett Appliance & Home Products. They specialize in offering appliances, lighting and countertops to builders and remodelers.

They decided to expand the business to Tyler because they felt the market had not been tapped from the outside, Trammell said.

"We were able to give builders things not offered to them," he said.

Trammell said the retail center in Tyler has been very good to them over the years. The business recently renewed its lease.

"We are very excited about the remodel. It has already stirred our business," he said, adding that a lot of people have noticed the business for the first time. "This has given us a facelift, and we're going to use it to our benefit."

Marshall said working around the tenants has been a bit of a challenge and they were all shut down for a recent weekend so concrete could be poured for new, wider sidewalks.