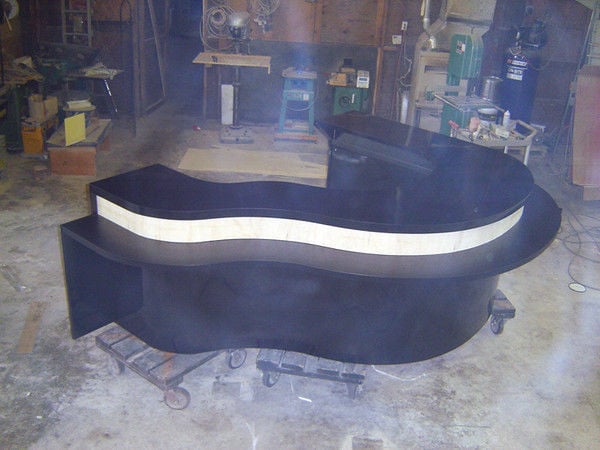 Ben Scott, of Scott’s Furniture and Cabinets, is constructing this piano bar – a bar that will actually fit around the grand piano so people can sit and sing along – for The Grand Piano Bar and Supper Club. (Courtesy) 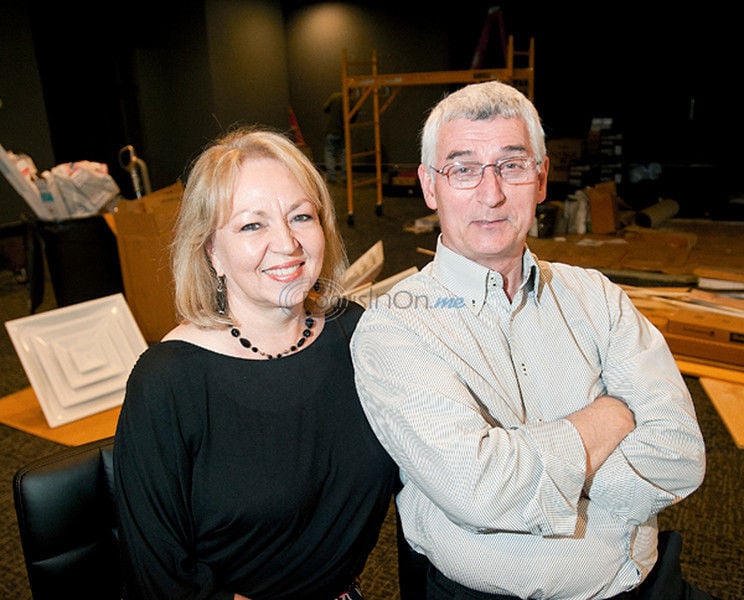 Herb Nygren Jr/Staff With his wife of nearly three years, Jonni Kay Campbell, Danny Burgess plans to open The Grand Piano Bar and Supper Club on Saturday. It will be “like the old supper club lounges … with state-of-the-art technology,” he said.

Ben Scott, of Scott’s Furniture and Cabinets, is constructing this piano bar – a bar that will actually fit around the grand piano so people can sit and sing along – for The Grand Piano Bar and Supper Club. (Courtesy)

Herb Nygren Jr/Staff With his wife of nearly three years, Jonni Kay Campbell, Danny Burgess plans to open The Grand Piano Bar and Supper Club on Saturday. It will be “like the old supper club lounges … with state-of-the-art technology,” he said.

Danny Burgess was 5 years old when his father started letting him sit backstage to watch him play with a 22-piece band.

“I couldn’t get enough of that,” he said.

Burgess, 62, said his dad, Harold Burgess, would pick one of his six children to go with him from Van to Dallas to play with a big band for lavish parties. When he asked which child wanted to go, Burgess always raised his hand.

He comes from a very musical family. His uncle played, two deceased brothers were professional musicians and his cousin, Lisa Layne, recorded “All I Want for Christmas is You.”

After high school, Burgess knew he wanted to follow in their footsteps but didn’t think he could. He played the French horn throughout college and didn’t pick up the piano until he was 25.

He went on to play music full-time for 25 years in Dallas, West Texas and Houston until the “bottom fell out” in the 1980s and the supper clubs of old began to disappear. He sold resort properties in Alabama before returning to music.

He’s been playing at country clubs, restaurants, senior living centers and private parties in Tyler for about 25 years. His father, now 90, still plays the saxophone and piano with him occasionally. Burgess plays just about every musical instrument there is but focuses primarily on singing and playing piano these days.

Throughout all of his nearly 40 years of playing in fine dining restaurants, Burgess saw what people were doing right and what they were doing wrong. He combined those experiences when coming up with The Grand Piano Bar and Supper Club to make an absolute consummate experience, he said.

With his wife of nearly three years, Jonni Kay Campbell, Burgess plans to open The Grand Piano Bar and Supper Club on Saturday. It will be “like the old supper club lounges … with state-of-the-art technology,” he said.

The audience will hear the big band, Broadway, jazz, ballroom dancing and other old-time music, but the sound will be better because everything will be digital, including the grand piano Burgess will play.

“The more mature, sophisticated music is what we’re after here,” he said.

Mrs. Campbell said Tyler has nothing like what they are bringing — a true piano bar and supper club. She said they hope to attract people mostly older than 35 who love the oldies.

There will be cameras on the grand piano, capturing his hands on the keyboard, cameras on the band stand and the dance floor, which can all be sent to an 80-inch screen TV in the main room or several smaller TVs in the private dining room.

“We decided to put everything I have been looking for in almost 40 years that I’ve always wanted in one place, starting with a perfect sound system,” Burgess said.

No matter where a person is sitting, whether it be closest to the stage are farthest away, they will get the same sound. A special acoustic system was put in, and software controls the sound throughout the building.

The sound, cameras, stage and lighting can all be controlled by an iPad or from his phone. He said Terry Barnhill, of TLB Technologies is his electrician/light/sound guy and made it all work.

Burgess said cabinetmaker Ben Scott has built a genuine piano bar — a bar actually built around the piano so people can sit around it and join in the music.

“It’s the sing-along piano bar,” he said, adding that they came long before karaoke. “We’re going back there.”

The ambiance will look like the old supper clubs, but LED lighting will replace candles on the tables.

Mrs. Campbell, 64, said they want to offer a comfortable, pretty place where people can come relax, enjoy an evening with friends, dress up and listen to music. The club will be intimate with a retro feel, she said.

“We built a place we would like to go, and this would be it,” she said.

Mrs. Campbell grew up in Fort Worth loving music, listening to big band and Broadway music with her dad, taking piano through high school and dancing to classical music in ballet. She came to Tyler in 2009 and met Burgess through a mutual friend, watching him perform. She got to know him while volunteering at a senior living facility where he was entertaining.

“We just about have everything in common,” she said. They share a love of music and books and he makes her laugh, she added.

Mrs. Campbell said the music is the main reason people will come to the club, but they also want to provide excellent service and really good food. They will have a limited menu with a few entrees but a lot of appetizers and desserts.

Burgess said they have catered the menu toward women, with smaller plates that allow more interaction and eating at a leisurely pace while listening to music. Their signature meal will be a three-course fondue meal, including a cheese fondue appetizer, filet tenderloin or chicken entr￩e and bananas foster or chocolate cappuccino fondue.

They will have “chill time” from 5 to 7:15 p.m., when Burgess will play the piano and talk with people, take requests and have the audience sing along. At 7:30 p.m., a different show will start every night. Tuesdays will be ballroom dancing; Wednesday is jazz night; Thursdays is ladies night; Friday will be a different show, such as Broadway music from “Phantom of the Opera;” and Saturday is grand night — “the whole shooting match,” he said. Burgess will sing every night, and the other artists who will be there won’t be performing regularly at any other local venue, he said.

Mrs. Campbell said a lot of the musicians will be the same every week but will be playing different music, as well as new musicians that come in from the area.

Once a month, they will open in the afternoons to seniors from local senior living communities.

Burgess urges people to make reservations in advance to make sure they get a seat. The place can hold 125 people.

Mrs. Campbell said they took two spaces in the Progress Center on Old Jacksonville Highway and combined them so they could have a main room with the piano bar, as well as a separate private dining room where parties or meetings can be held. She said they chose the location because of that, as well as because of all of the business in the area and that they live nearby. They will have 15 to 20 employees.

The club will welcome people 21 and older and will have a business casual dress code, with no T-shirts, shorts, flip flops or tattered jeans allowed.

“It’s a place people can go and dress up,” Mrs. Campbell said.