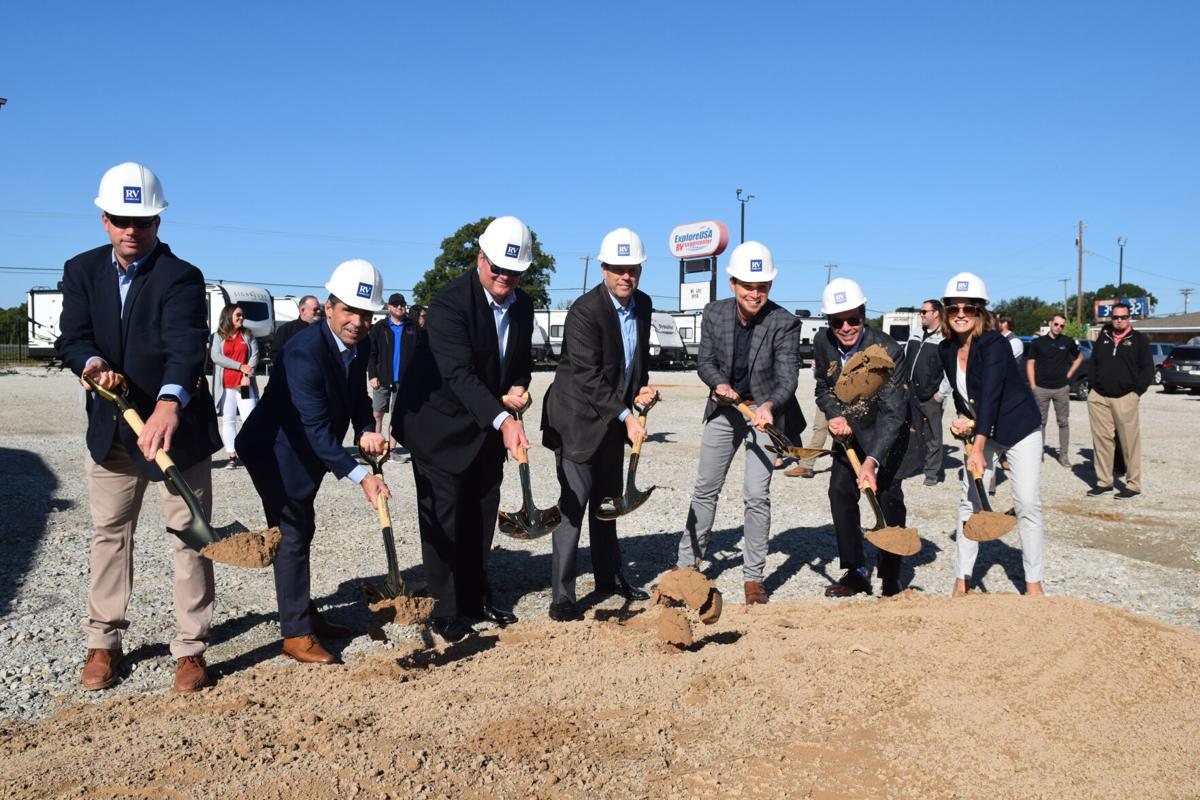 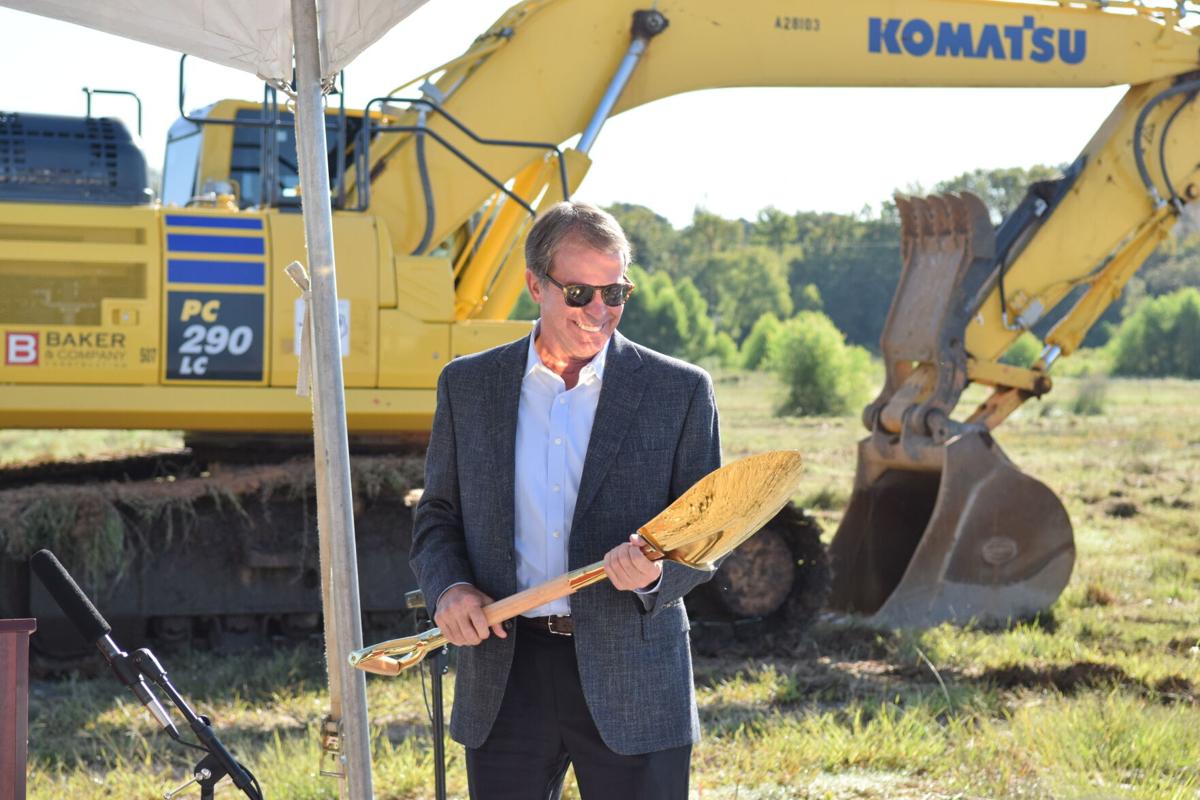 Scott Chaney, the original founder of Explore USA and still a current partner, was given a golden shovel for his work to make the new Tyler facility a reality on Tuesday. 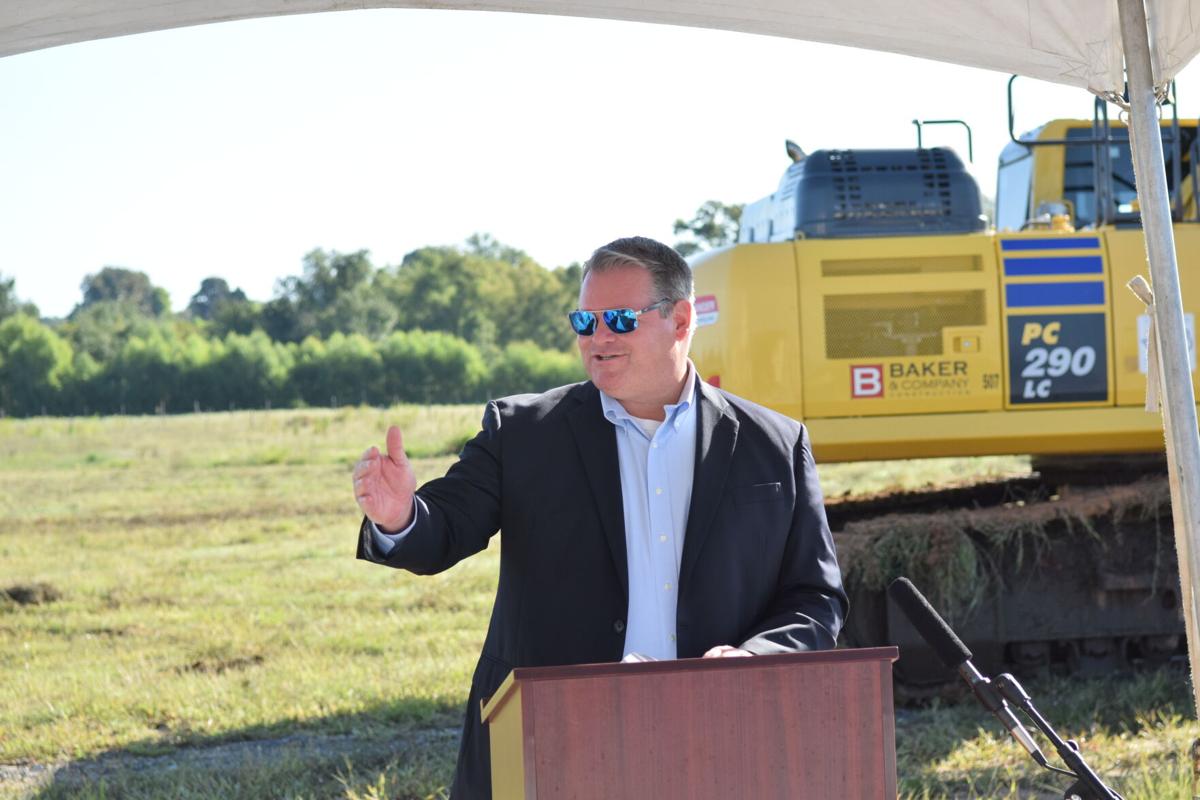 Larry Hall, president of ExploreUSA talks about the new RV facility in Tyler on Tuesday before the groundbreaking. 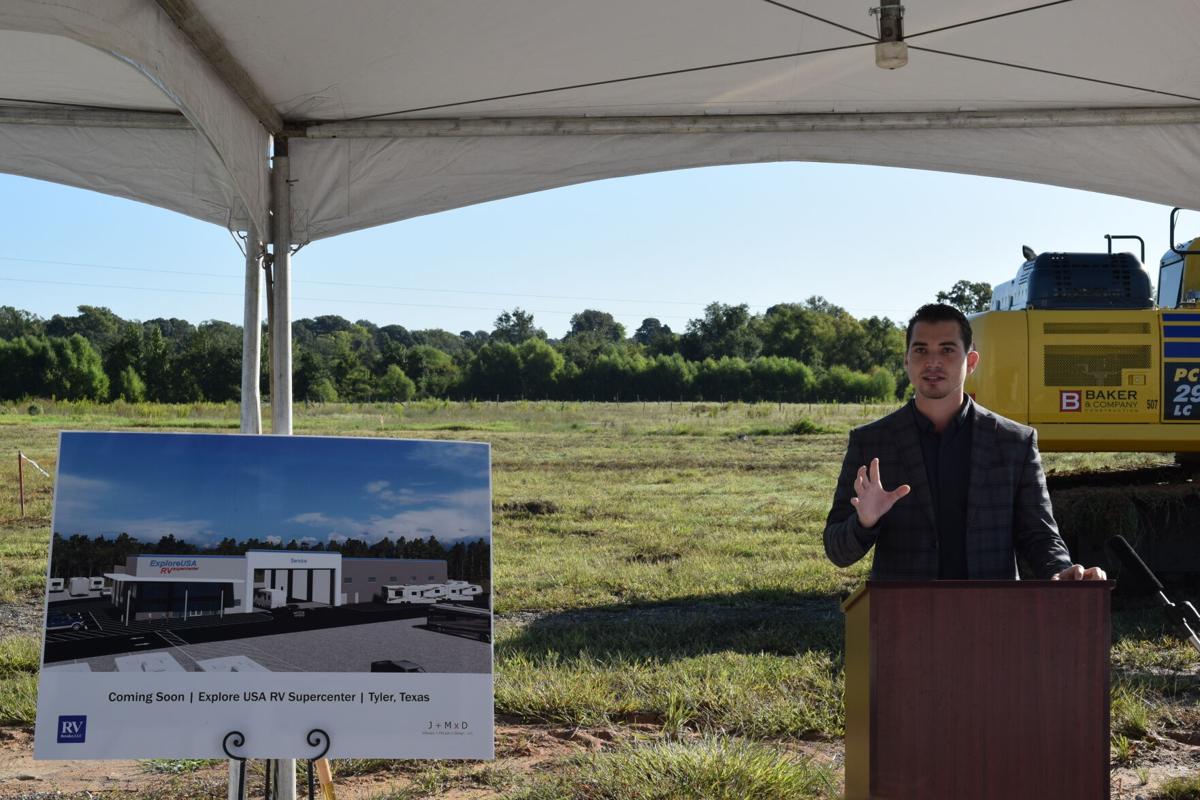 Before the groundbreaking for the new ExploreUSA RV Supercenter,  Joe Lazzarino, general manager, talked about what it took to make the Tyler facility a reality. 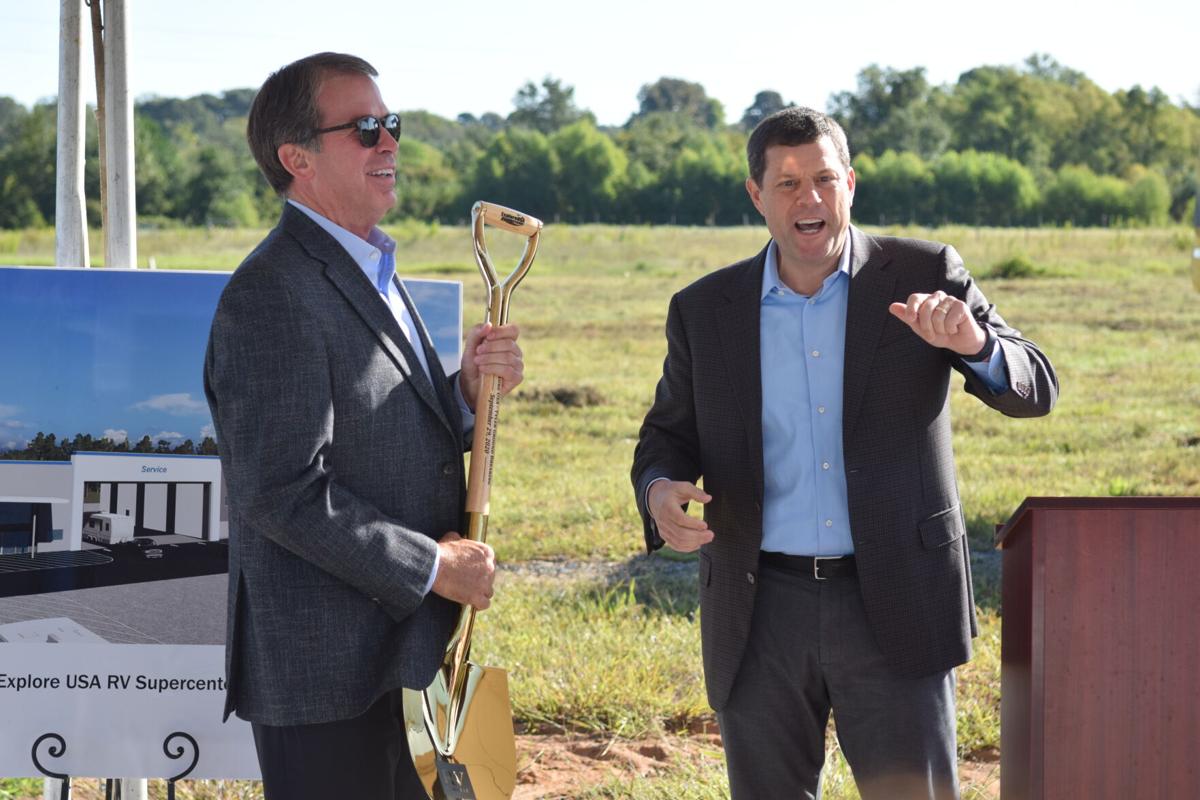 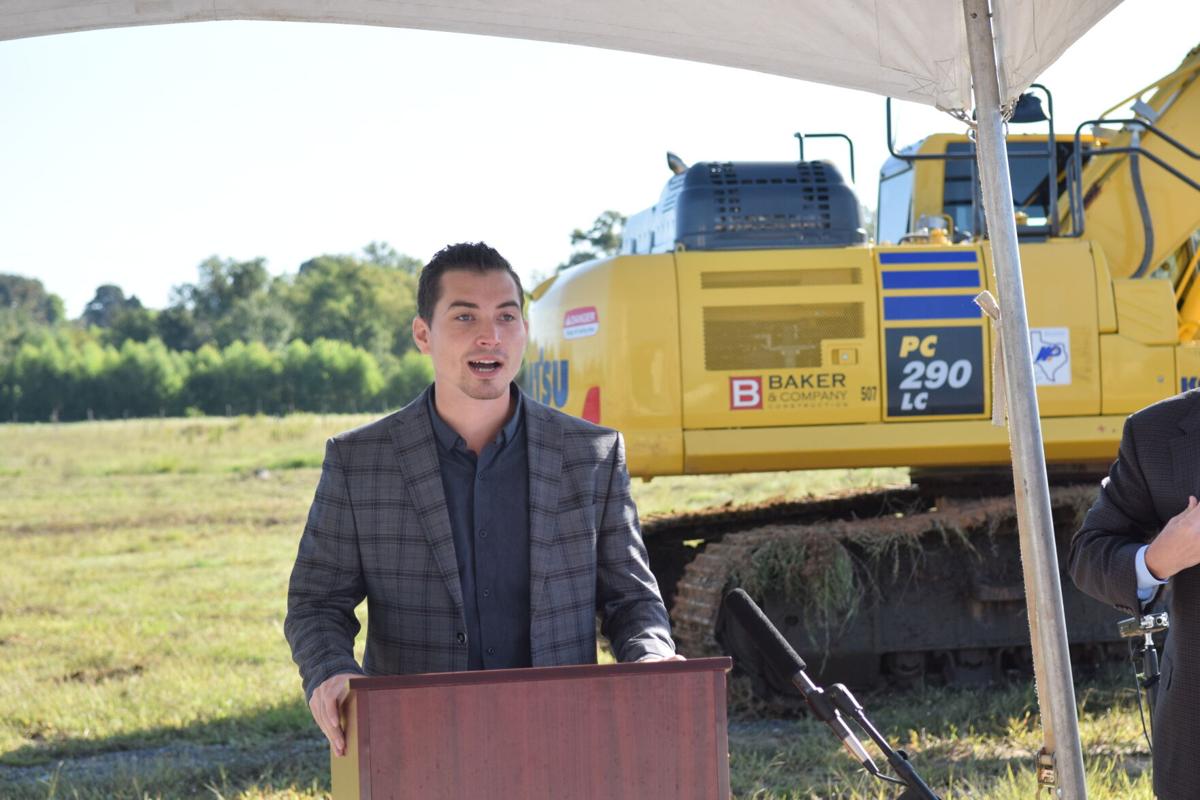 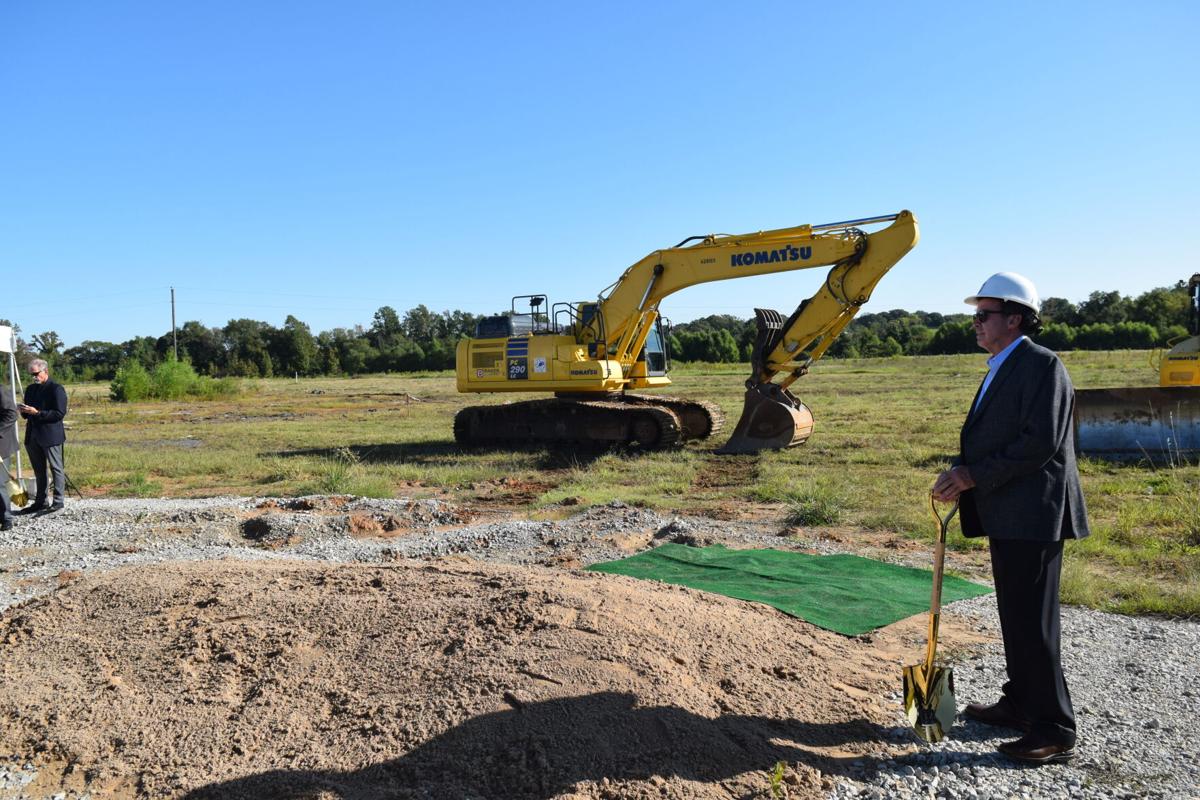 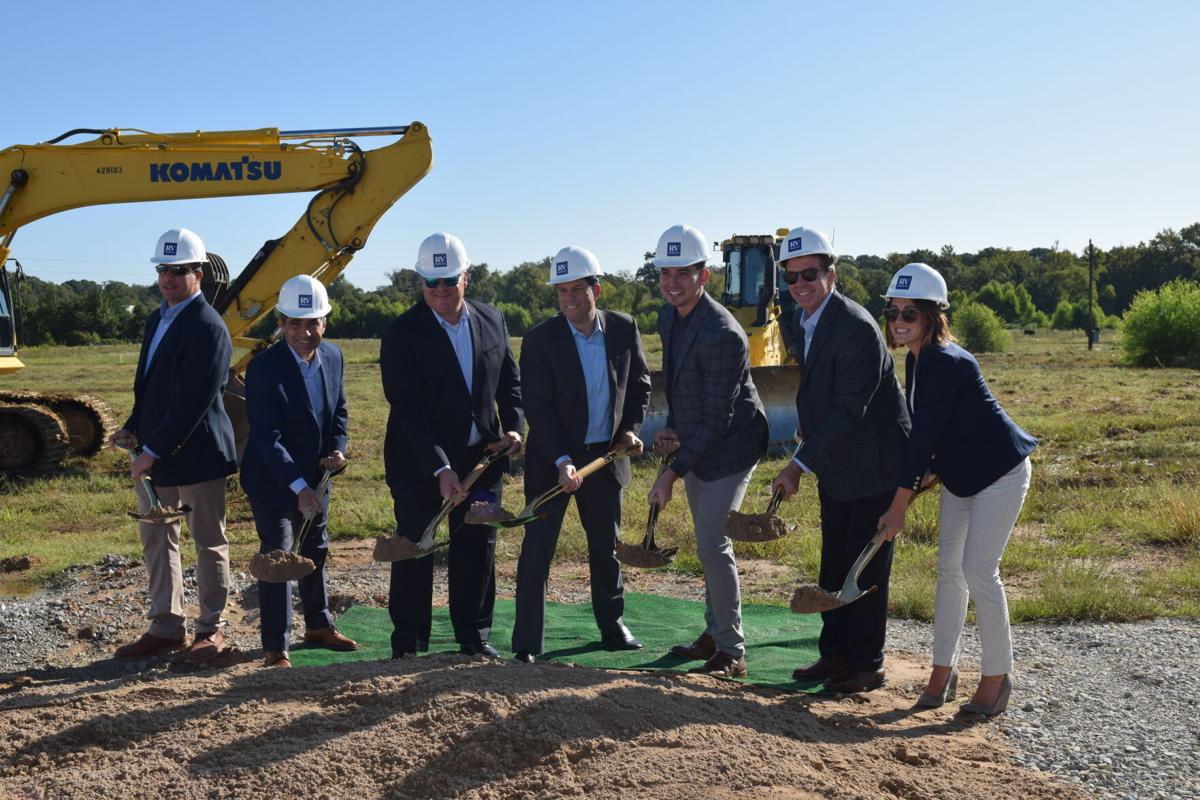 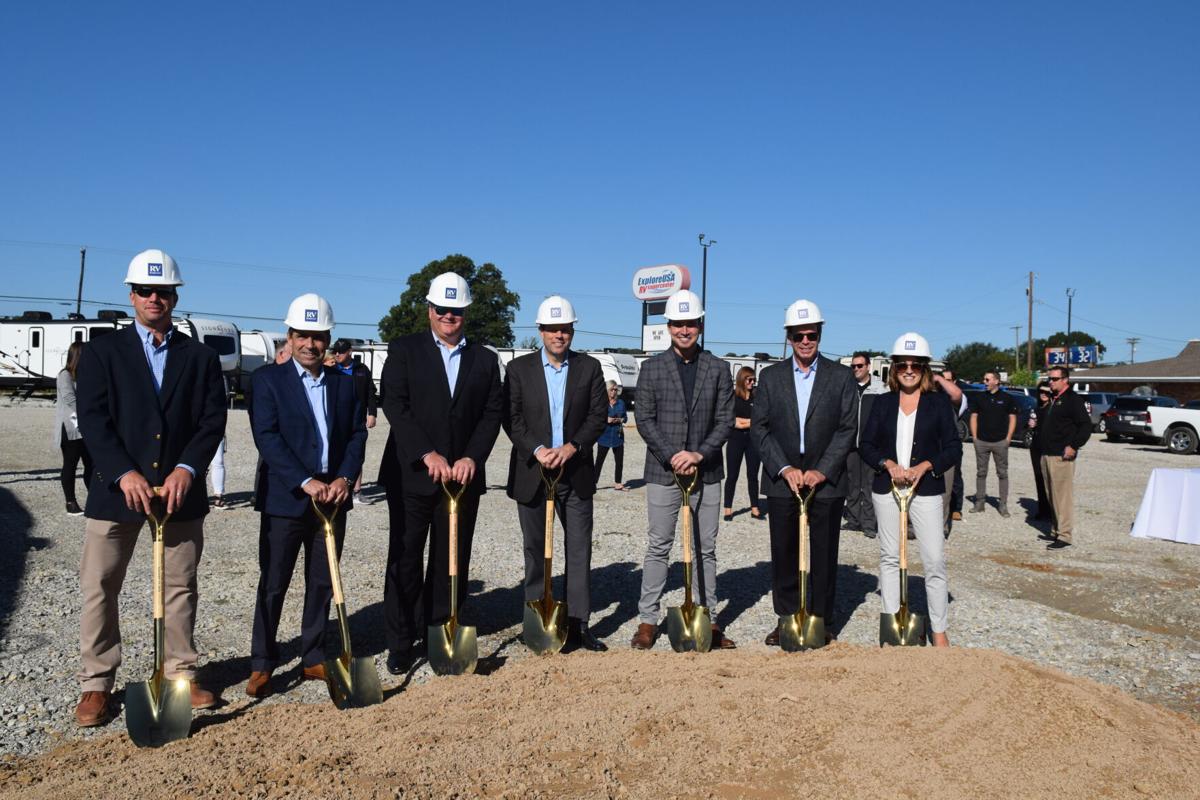 Scott Chaney, the original founder of Explore USA and still a current partner, was given a golden shovel for his work to make the new Tyler facility a reality on Tuesday.

Larry Hall, president of ExploreUSA talks about the new RV facility in Tyler on Tuesday before the groundbreaking.

Before the groundbreaking for the new ExploreUSA RV Supercenter,  Joe Lazzarino, general manager, talked about what it took to make the Tyler facility a reality.

Through the development of a new facility, one Tyler RV dealership will be able to invest in the community by providing more jobs to local residents and respond to the growing demand for RVs.

ExploreUSA RV Supercenter broke ground for its new facility, which is set to be complete next spring, on Tuesday morning and hosted a ceremony to acknowledge the addition and how far the store, at 10926 U.S. Highway 69 North, has grown.

ExploreUSA RV Supercenter General Manager Joe Lazzarino said it’s the one-year anniversary of when the store in Tyler opened, and it has “quite literally busted at the seams with growth.”

He said ExploreUSA strives to provide customers with the best ownership, purchase and service experiences.

“We believe RVs are designed to make the journey and the travel just as memorable as the destination where we land,” Lazzarino said. “And that’s what we’re committed to do here – just make the process just as great as the Grand Canyon or Yellowstone when you arrive.”

Lazzarino said the ExploreUSA in Tyler is the No. 2 RV dealership in the market, and the new facility will help it become No. 1.

He added that they’ve hired several employees from the Tyler, Lindale and Smith County area.

Larry Hall, president of ExploreUSA, said the company has served the Texas market for decades with other locations in towns like Canton, Dallas, Houston, San Antonio and Austin.

“We’ll continue to grow and expand in Texas. It’s the number one RV market in the nation,” Hall said. “And in growing our business, we’ll continue to employ Texans, which is a top priority for our organization.”

Hall said that he’s never seen a store do so well in a short amount of time, and the new location will be great for customers.

“This particular location is off the charts. I’ve been in the dealership retail world for 30 years. I’ve never seen a store do as well as it’s done in such a short period of time,” Hall said. “And it’s not only a testament to the community, it’s a testament to all the people.”

ExploreUSA locations are owned by RV Retailer LLC, a company with locations across eight states.

Jon Ferrando, president and CEO of RV Retailer, said the plans for ExploreUSA in Tyler began in January 2019 after purchasing a rose farm property on U.S. 69.

He said the farm was able to preserve its roses at another location. A year after opening, the dealership is continuing to grow.

“This has been nothing short of a huge success ever since we opened the store,” Ferrando said. “This team in 12 months has sold 673 RVs since the store was opened last year.”

ExploreUSA in Tyler currently has 18 employees and with the new facility there will be about 40 or 50. Virtually all employees here will be Smith County residents and Tyler residents, he added.

“It’s a great RV retailer from a customer perspective who invest a lot in service, which a lot of other RV dealers don’t do,” he said. “So if you buy your RV here, we’re going to take care of your service and that’s a big part of the investment that we’re making in the facilities.”

He said RV Retailer is the fastest-growing company in the RV industry and it has sold over 23,000 RVs this year and serviced over 100,000 RVs.

“It’s just a great time to be in the RV industry. Consumer demand is just off the charts and even more so in the wake of COVID-19,” Ferrando said. “So we love the business coming into that and love it even more. It’s just absolutely exceptional.”