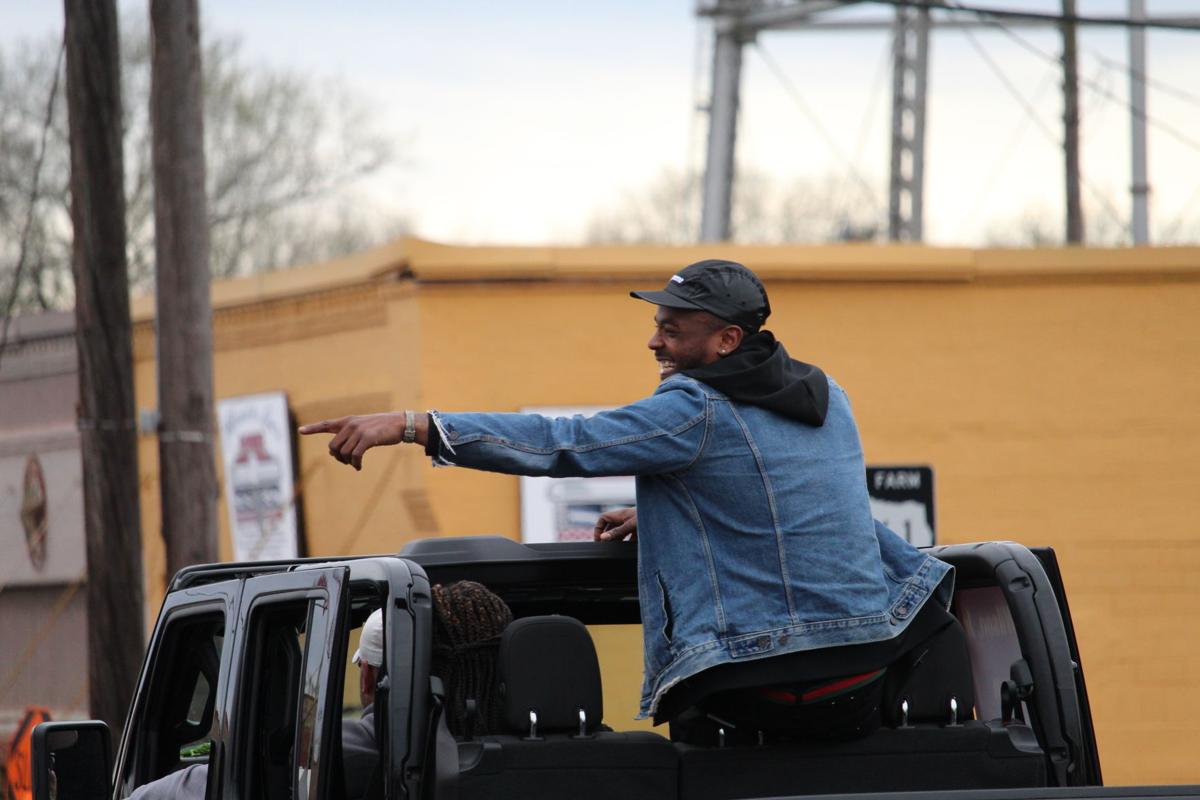 Elkhart graduate and San Francisco 49er Jeffery Wilson Jr. points to friends in the crowd during a parade through Elkhart on Saturday. 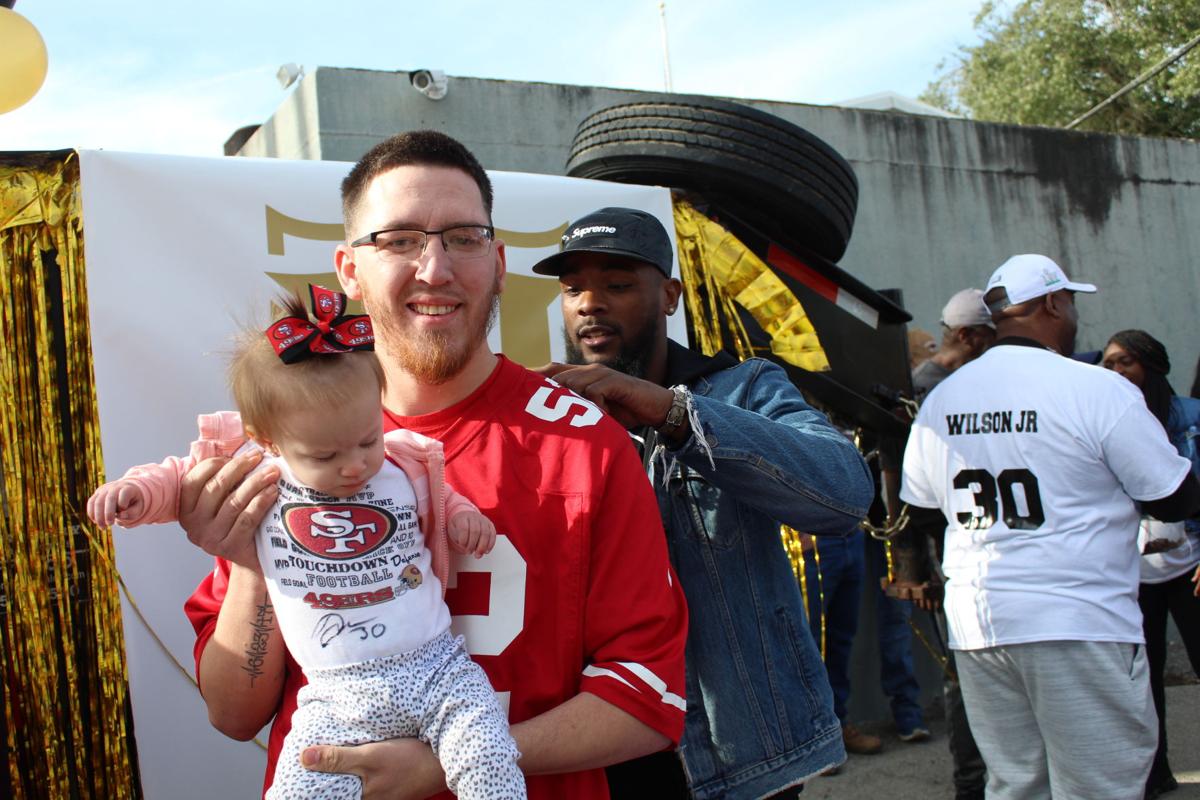 Jeffery Wilson, Jr. signed autographs for over two hours on Saturday after a parade in his hometown of Elkhart. He also signed photos, jerseys and clothes on babies. 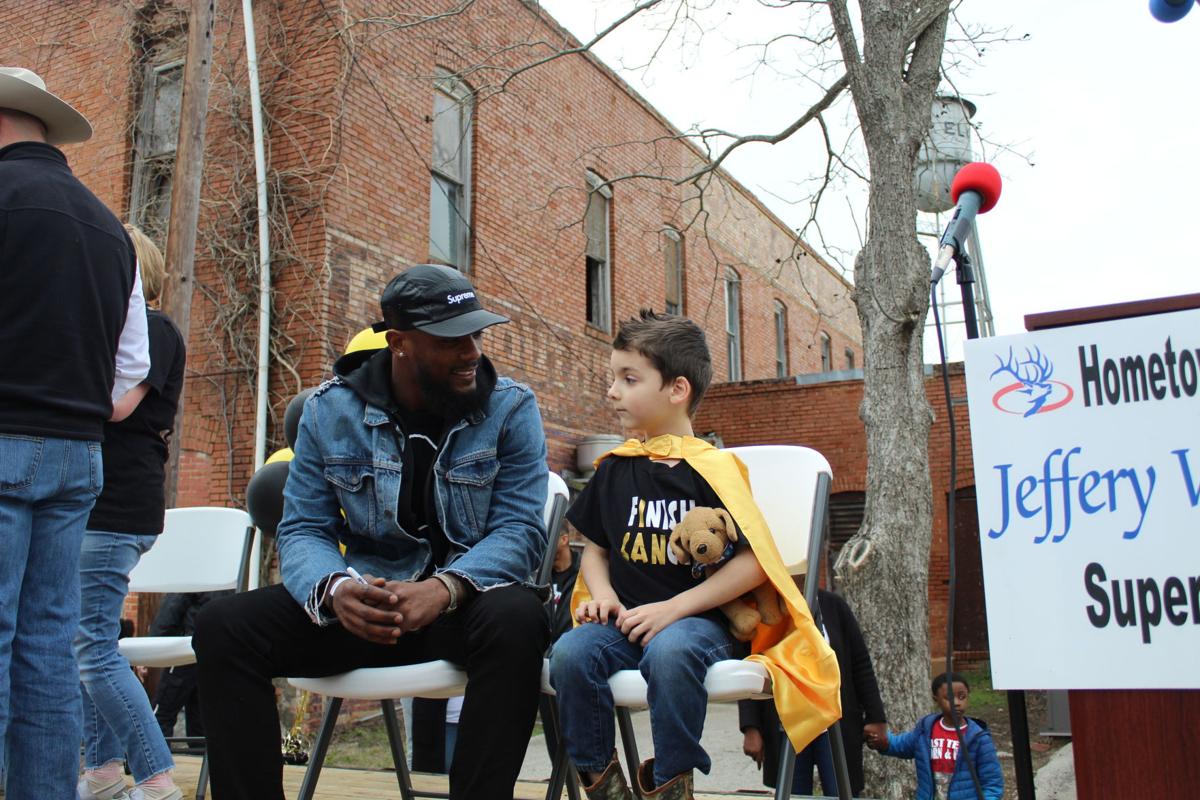 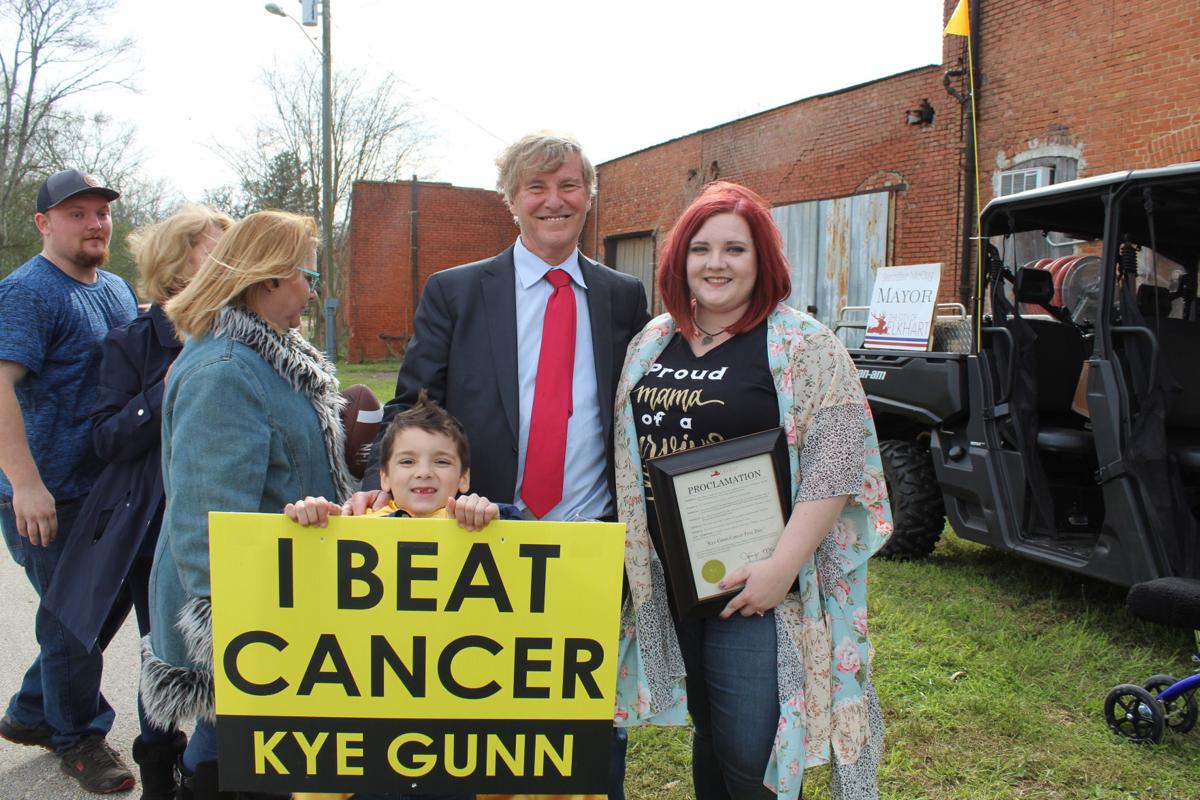 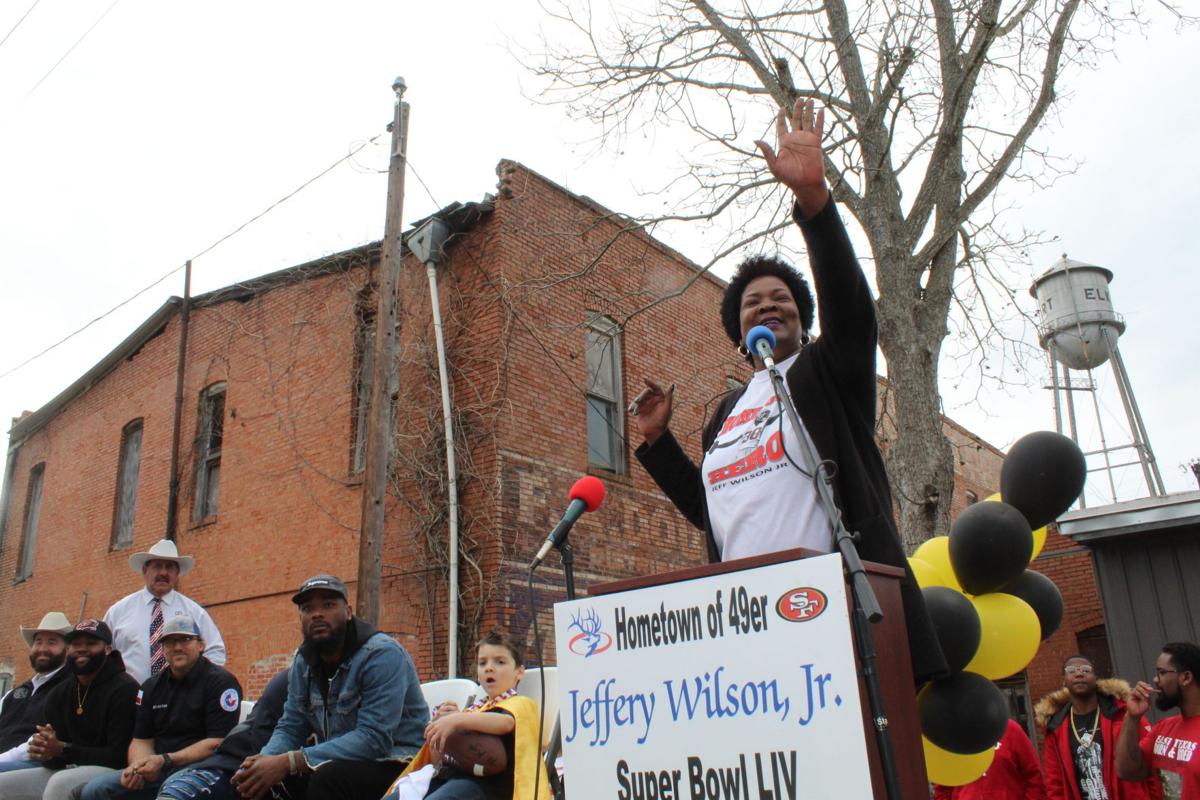 Jeffery Wilson Jr.’s mother, Angela, thanks and waves to family in the crowd after the parade Saturday in Elkhart. 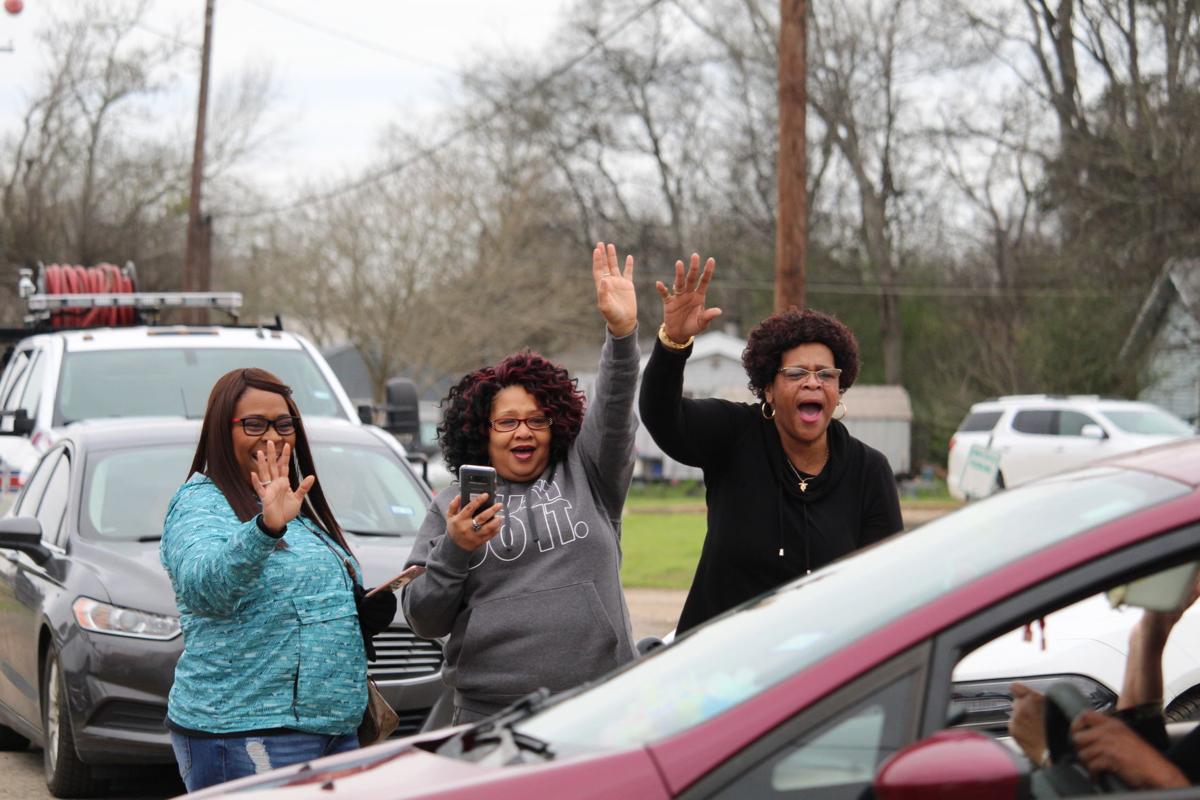 The streets of Elkhart were lined for the Jeffery Wilson Jr. Parade on Saturday celebrating the Super Bowl and Wilson.

Elkhart graduate and San Francisco 49er Jeffery Wilson Jr. points to friends in the crowd during a parade through Elkhart on Saturday.

Jeffery Wilson, Jr. signed autographs for over two hours on Saturday after a parade in his hometown of Elkhart. He also signed photos, jerseys and clothes on babies.

Jeffery Wilson Jr.’s mother, Angela, thanks and waves to family in the crowd after the parade Saturday in Elkhart.

The streets of Elkhart were lined for the Jeffery Wilson Jr. Parade on Saturday celebrating the Super Bowl and Wilson.

ELKHART — One after another, those who helped shape Jeffery Wilson Jr. as a person and a football player talked about his goal to play in the NFL, never settling for a “Plan B,” his faith and sense of community.

All of that was challenged when the San Francisco 49ers announced on Jan. 19 before the team was going to play the Green Bay Packers in the NFC championship game, “No. 30, Jeff Wilson Jr., RB will be inactive.”

Wilson was a healthy scratch for that game, but worked hard in practice as his 49ers won. The Elkhart graduate was suddenly part of the game plan to win a Super Bowl. He was not only active, but helped his team take a lead in Super Bowl LIV. Of course, another East Texas legend, Patrick Mahomes II of Whitehouse, was the MVP of the game with the Kansas City Chiefs, as KC came from behind to win, 31-20.

On Saturday, Wilson was honored by his hometown and he talked about what it took to get in the Super Bowl lineup in Miami.

“At the end of the day it’s about the common goal which was getting to the Super Bowl. If it’s with me playing or not playing, at that point I had to swallow my pride and do everything I could to get the team to get into the Super Bowl, even if that meant being on the scout team all week,” said Wilson. “I felt I got the team ready, and that was my job.”

Then he was not only playing, but made key blocks and a big 20-yard catch to give his team a 20-10 lead in the fourth quarter. He didn’t play like someone nervous from a small East Texas town, and said being on the field pre-game helped.

“I’m walking around pre-game, I see Jay Z and Meek Mill, I saw all of those celebrities walking on the field, and I thought ‘I feel like I made it right now,’ I was on the same field of all of them,” he said. “(On the big catch) I was trying to get more yards! At that point I was locked in, I was trying to play the rest of the game. I was focused.

“It was a situation and moment I will never forget the rest of my life, my family was with me and everyone got to experience it and it was something we will always cherish,” he added.

If the population of Elkhart is 1,329, then not only did the whole town come out Saturday for a parade and celebration, but neighboring towns and fans as well.

After the parade and 30-minute program, Wilson signed autographs and posed for photos with friends, family and strangers for close to two hours. He signed sneakers, a onesie on a baby, jerseys, T-shirts and a stack of 500 photos.

His mother, Angela, said, “Thank you so much, this is huge. When we think about our children growing up to be young men and women, we never think our kids could make it to this platform. To the young children, it’s about you and what you have in your heart to do. On behalf of the family, thank you, and thank you to Leigh Steinberg, Jeffery’s agent, he came a long way to be here. And I know a lot of you did to make this day special for Jeffery.”

Steinberg was the original super-agent and wanting to do the right thing became the basis for the movie Jerry McGuire with Tom Cruise playing the character based on Steinberg. He also represents Mahomes and Tyler’s Earl Campbell.

Steinberg watched the parade and the speeches as Wilson and Elkhart Mayor Jennifer McCoy honored Kye Gunn of Elkhart, a child who is a leukemia survivor. Kye, who is almost 6, went through 918 days of treatment, 898 doses of chemo and three major surgeries and was declared cancer-free on Feb. 4. McCoy proclaimed that day Kye Gunn Cancer-Free Day. Steinberg made it a point to find the family, congratulate them and posed for photos.

“We are so proud of Jeffery, not just because he is a very talented ball player, but the quality of his character and how he is an outstanding role model. To be a part of this, to see the whole community come out for him is heartwarming,” said Steinberg. “You see the basic order of God, family and community in someone’s life.

As for the time Steinberg spends in East Texas, he joked, “I may set up residence here. This area is amazing in terms of how many athletes it produces. It’s an area that loves sports but also an area that values family.”

When Wilson finally had a chance to address the crowd, he said the NFL is great, but being home was better.

Wilson then addressed the kids in the crowd.

“To the young people, coming in, seeing the cheerleaders and all of you gave me energy. As far as reaching goals, you can be anything you want to do. I heard my whole life ‘you need a Plan B, maybe you do this, it might not work out that way.’ But at the end of the day I knew what I wanted to do. No matter what I was told, nothing was going to stop me. And if you want something that bad, that’s the mind-set you have to take. It’s not going to happen overnight. I had to grind it out. For 18-plus years, I did every workout, and it all paid dividends. You have to put the work ethic behind it. You have to put yourself in a position to be great.

“It’s going to get bigger from here, I promise and I hope you all stand behind me,” Wilson added.

Dr. Lamont Smith, superintendent of Elkhart ISD, gave a prayer to start the event and said, “The time Jeff was with us, he believed he could do something that was uncommon. On the field at Elkhart, he made it look easy. He said he believed all he could do and all he would do was a professional football player. He said, ‘I don’t have a Plan B, I have a Plan A.’ And that plan worked.”

Pastor D.R. Barrett said, “What a beautiful day this is for Jeffery Wilson Jr., also known as Bubba. He is a big part of our church and our lives. When he comes home from the NFL, he always goes to church and that means a lot. There are a lot of young men with the same dream as Jeffery. They want to play in the NFL and they want to play in the Super Bowl. He did both of them.”

Kishawn McClain of Rosenberg Terry High near Houston was the first person Wilson met on the campus of the University of North Texas and they were roommates for four years playing for the Mean Green. McClain signed with the Oakland Raiders.

“The first day I met him, I heard his accent and said ‘where are you from?’ I could understand him!” McClain joked. “I am proud of you, your son is looking up to you. You made it. When I went to Oakland, you were the first person I called. And you were going to San Francisco. God wanted us together! I am proud of you, I support you and I love you.”

Pastor Roy Duncan from the Antioch Church in Palestine said, “He is a gifted musician and was the drummer at our church. Nobody has taken your place in all these years! As proud of Jeff as I am, it’s not about what he does on the football field or in uniform. But the personality and character God gave to him. I am proud of him, but I was proud of him before he put on a uniform and I am grateful God gave him this platform.”

State Representative Cody Harris told Wilson he was a great example for kids. Anderson County Sheriff Greg Taylor said Wilson accomplished a dream he always sought. He said “you were from a small town and here you are. And we’ve got your back. Today is your day, we celebrate you and there’s more to come.”

Wilson’s high school coach Jason Ives (now the high school principal) said, “In eighth grade, Jeffery said he had a dream to play in the NFL. Today, I am proud to say, Jeffery, you are living that dream. We are super proud of you.”

The entire ceremony can be viewed on the Tyler Paper Facebook page.