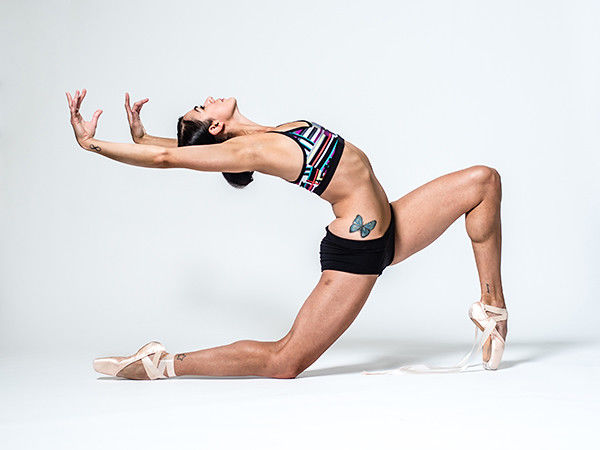 Sona Kharatian, a dancer from the Washington Ballet shows off her tattoos. (Photo by Andre Chung for The Washington Post) 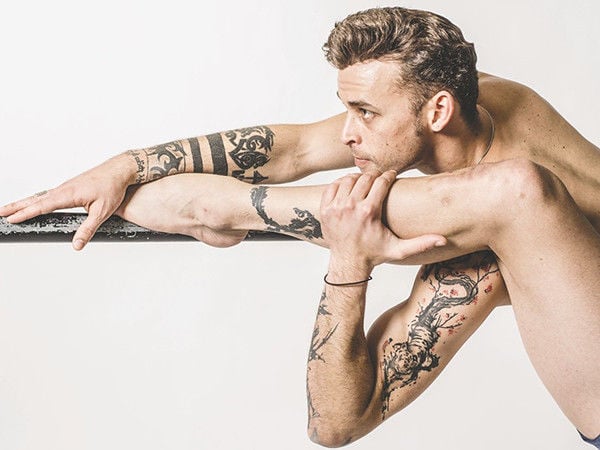 Taras Domitro, a dancer from the San Francisco Ballet, shows off his tattoos. (Photo by Andre Chung for The Washington Post) 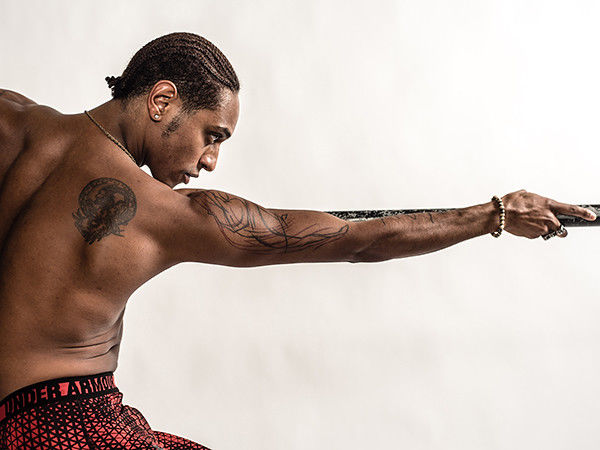 Anthony Spaulding, a dancer from the San Francisco Ballet, shows off his tattoos. (Photo by Andre Chung for The Washington Post)

Sona Kharatian, a dancer from the Washington Ballet shows off her tattoos. (Photo by Andre Chung for The Washington Post)

Taras Domitro, a dancer from the San Francisco Ballet, shows off his tattoos. (Photo by Andre Chung for The Washington Post)

Anthony Spaulding, a dancer from the San Francisco Ballet, shows off his tattoos. (Photo by Andre Chung for The Washington Post)

When San Francisco Ballet principal Taras Domitro was sidelined with an injury, he decided to cheer himself up by getting another tattoo.

After coming up with the perfect statement, he used an app to translate it into Elvish, the Tolkien language.

The tattoo, which coils around his forearm, reads: "Everything is beautiful, and nothing hurts."

In a field populated by young, exquisitely fit artists - in which pain is just part of the job, and one's body is always on display - tattoos have become a fashionable form of self-expression and affirmation. Under his velvet doublet, the tenderhearted prince in "Swan Lake" might be inked with howling wolves and the Great Wall of China. The trembling swan queen herself could be tatted up beneath her tutu like a heavy-metal rocker.

One of the best-known tattooed dancers is Sergei Polunin, the former Royal Ballet principal who became a YouTube star with a yearning dance to Hozier's "Take Me to Church" that put his lavish ink on view. (He was once part-owner of a London tattoo parlor.) New York City Ballet principal Joaquin De Luz bears intricate artwork on his shoulders, arms and ribs.

"It's just one more way to give ourselves reminders and inspiration," says Washington Ballet member Corey Landolt. His inked designs include the White Tree of Gondor, a symbol of hope, rebirth and resolve from "The Lord of the Rings," and a pair of doves, commemorating a Christmas ornament his mother gave him. Like much of the body art that dancers exposed for this article, they hint at a longing for stability and uplift, desires that reflect the realities of an unpredictable, competitive profession shaped by subjective standards.

"You want to remind yourself of what your truth is," says Julie Kent, artistic director of the Washington Ballet. When she was a member of the American Ballet Theatre, she watched her friends get one tattoo after another. Now, as a boss, she has to decide when her dancers should cover them up, and when it's okay to flaunt them.

Tattooed dancers confront unique challenges. Their body ink's ability to inspire also carries a burden. What if a performer in a shirtless contemporary work uses makeup to camouflage his half-sleeve of ink, but it turns his partner's costume brown when he lifts her?

Placement is key. The Washington Ballet's Sona Kharatian has a palm-size butterfly in honor of her late mother on her haunch, where it's not likely to be seen. She has the word "harmony" inked on her ankle, where her toeshoe ribbons conceal it. Covering tattoos in more exposed areas isn't easy. Dancers not only sweat, but they have to lift, catch and clutch one another, which means damp body parts and makeup rubbing against expensive, difficult-to-clean costumes.

"Tattoo cover is a huge portion of what I do," says Sarah Coy, who works in the makeup department at the San Francisco Ballet, as well as for film and television. Dancers are her most challenging clients. Coy and her colleagues use special-effects makeup mixed with alcohol, so it's resistant to oil or water (which makes taking it off a separate challenge for tired dancers after a show). They apply it in thin layers so it doesn't flake off. Thick bands of tattoos that encircle an arm require even more makeup layers and tricky color matching, because the skin inside the arm is lighter than on the outside.

It can take 20 to 40 minutes to cover a dancer, Coy says. The heavily inked might require a team of makeup artists for certain skin-centric roles, such as when Domitro starred in a work titled "Swimmer" wearing only a bathing suit. For the upcoming spring season, Coy plans to experiment with an airbrush gun to save time.

Some dancers can get by with a flesh-toned fabric sleeve. Elisa Clark, who performed with the Lar Lubovitch Dance Company and the Mark Morris Dance Group before joining the Alvin Ailey American Dance Theater, has used that kind of sleeve to cover an inked-up arm. Many contemporary choreographers don't mind visible tattoos, which is a good thing, because about half the Ailey company is tattooed, she says. But for works created by Ailey himself, tattoo coverage is mandatory, and the fabric sleeve is not foolproof.

"I was onstage in 'Revelations,' and I could feel it slide down to my wrist, during the opening section," Clark says. To avoid overstretching, she now has three different sleeves hanging on the rack with her costumes.

"Sometimes I look at myself in the mirror, and I say, 'Man, I wish I didn't have any,' " says Sascha Radetsky, a former ABT soloist. His arms are a gallery of Native American images and tributes to Georgia O'Keeffe, Gustav Klimt and "Moby Dick."

Having tattoos "makes things harder," Radetsky says. "Preparing for a role is tough enough as it is - you have a lot of things to think about." Covering lots of ink "adds one more element into the mix. And there's some old-fashioned views about tattoos. Maybe on some tiny, subconscious level, that influences people's decisions on casting."

What do company directors think? The New York City Ballet has no official tattoo policy, and dancers cover up for performances "by their own volition," says Robert Daniels, managing director of communications. San Francisco Ballet Artistic Director Helgi Tomasson wrote in an email, "There seem to be more dancers with tattoos these days, but as long as they can be covered up for performances, I don't have an issue with it."

Kent says that tattoos can help a contemporary piece look more . . . contemporary. "It can keep it more fresh and of the moment to allow people to appear as they are," she says.

"The body is our temple," says Samuel Wilson, a Washington Ballet dancer tattooed with his own designs. "This is my stained glass."

Subscriber 1/2
WHO WE ARE TMT