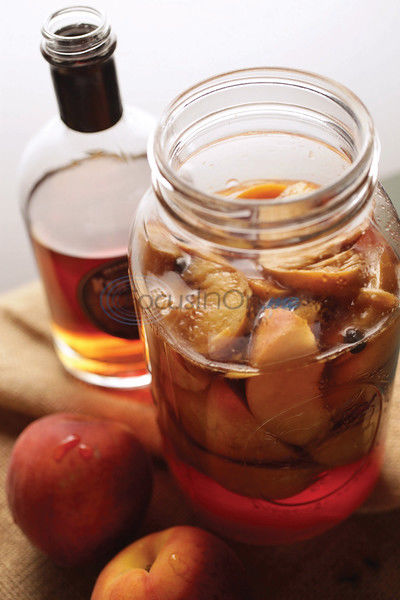 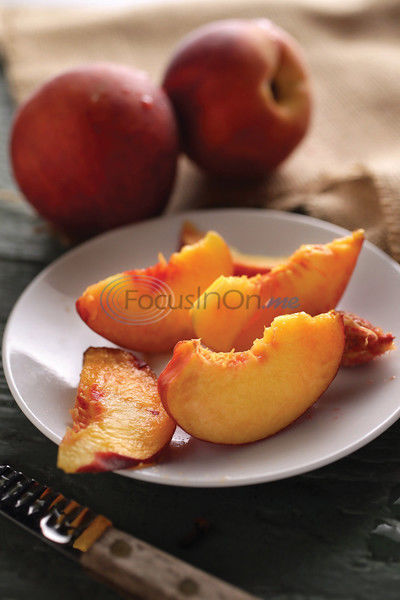 You bite into a ripe peach. A drop of delicious juice spills over your lips and traces a wet, sticky trail down your chin.

Few experiences in this world are more mind-blowingly sensual than eating a ripe peach bursting with flavor.

But that's a fresh peach, consumed au naturel. What about cooking with peaches? What about using them in savory dishes? Are they still as amazing then?

Of course they are. Peaches are still peaches, even when placed on top of a pizza.

So I put peaches on top of a pizza, where they more than held their own. The secret was my grill.

Using a recipe by Martha Stewart (and I'm not embarrassed to admit that), I grilled the sliced peaches before using them as a flatbread topping. I knew that would caramelize the fruit, making it sweeter, but what I did not anticipate was how just a couple of minutes on the grill would give the peach a smoky flavor.

That extra blast of smoke (more prominent, actually, than the added sweetness) was the perfect accompaniment to a thin layer of salty, smoky prosciutto. A sprinkling of fresh basil added a heady bite, which nicely cut a rich and creamy layer of mozzarella.

And all of this goodness was perched on top of a grilled pizza crust, or at least it would have been if I'd followed Ms. Stewart's recommendation. I wanted something slimmer so the other flavors would stand out more. I wanted to use a grilled flatbread, but just at the critical moment I couldn't find a suitable version at the store.

So I settled on a naan, a thicker-than-flatbread flatbread that is popular in India. I bought three (they come in a three-pack), grilled them and topped them with the peaches, prosciutto, basil and cheese.

They were great. The distinct taste of the naan added one more complementary taste to the toppings, but to be perfectly honest a pizza crust would be just as good, or a flatbread or even a pita.

I wasn't through with savory uses for peaches. If peaches are one of the ultimate expressions of summer, then tomatoes are another. Put them together, and you've got a peach-and-tomato gazpacho.

Ordinarily, peaches and tomatoes do not play well together. Peaches are sweet, tomatoes are acidic, and the flavors do not meld with ease. But a simple secret brings them together in culinary harmony: Just add salt.

Salt brings out the sweetness and tempers the acid in many foods including tomatoes (and even peaches). Just a bit or two of salt turns these two competing fruits into the best of friends.

It's even better when you add a dollop of Greek yogurt that has been mixed with diced cucumber, chives and a minced clove of garlic. It all tastes as great as it sounds.

Naturally, I wanted to use peaches in a dessert, too; dessert is the natural medium for a peach. But I didn't want to make a pie (too ordinary) or a tart (too commonplace) or even a galette (too much like a pie or a tart).

And that is when I saw a recipe for a fresh peach cake. The recipe is by Ina Garten, and no, I'm not embarrassed about that, either.

This recipe is more of a coffee cake than a cake cake. The batter has sour cream in it — I could just eat the batter all day — along with all the other ingredients that make cake so delectable: butter, sugar, eggs, vanilla and flour. Then it is topped off by a combination of cinnamon, sugar and pecans.

But it is the peaches that raise the cake from ordinary to extraordinary. In the middle, adding their sweet moistness, lies a layer of thin-sliced peaches topped with more of the cinnamon and sugar. And on the top is the same.

Try it with a cup of coffee. Try it with a glass of milk. But try not to eat the whole thing at once by yourself.

Finally, I decided to take advantage of one of those classic flavor combinations that are not too well known. Peaches go with bourbon. Bourbon goes with peaches. A slice of peach muddled in a glass of bourbon brings out a new and wonderful set of flavors.

If one slice of peach and one shot of bourbon is good, how much better would it be to slice up three or four entire peaches and let them steep in a bottle of bourbon for a week or so?

A not overwhelming amount of sugar, two tablespoons, helped to mellow out the bourbon, and a couple of cloves and allspice berries added their own festive notes.

While it is superb on its own or with a few cubes of ice, this lighter, friendlier version of bourbon also makes exceptional mixed drinks.

There is nothing like a drop of peach-infused bourbon spilling over your lips and down your chin.