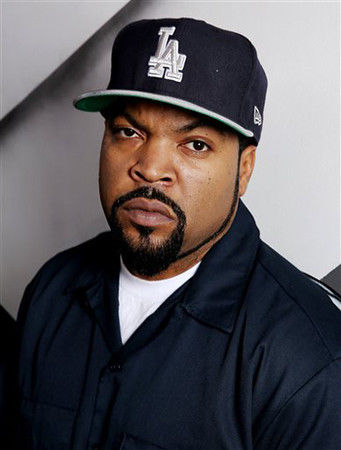 In this Tuesday, Feb. 11, 2014 photo, Ice Cube poses for a portrait in Los Angeles. Ice Cube co-starred with Kevin Hart in the film, "Ride Along," which has made over $134.6 million worldwide. (Photo by Matt Sayles/Invision/AP)

In this Tuesday, Feb. 11, 2014 photo, Ice Cube poses for a portrait in Los Angeles. Ice Cube co-starred with Kevin Hart in the film, "Ride Along," which has made over $134.6 million worldwide. (Photo by Matt Sayles/Invision/AP)

LOS ANGELES (AP) — In the 20-plus years since Ice Cube decided to focus on movies, he's taken on key roles in filmmaking — acting, writing, even directing. But it's his work as a producer, with his own production company Cube Vision, that's given him the most satisfaction — and perhaps the most success.

It was Ice Cube who made the decision to cast superhot Kevin Hart for his buddy flick "Ride Along," which was key in helping the film gross over $140 million since its mid-January release. It earned MTV Movie Awards nominations for best on-screen duo and comedic performance for Hart. They'll attend the live show April 13 in Los Angeles.

"We had the movie for five or six years and we saw Kevin Hart blowing up. We knew we could throw a few folks in that I'd worked with in the past, but we wanted it to feel fresh. It became a dream team," he said during a recent interview. "Being No. 1 for three weeks is something we weren't expecting. To be the cream of the crop is no easy feat. It's a big deal. I've been on cloud nine."

"Ride Along" is the latest in a line of film hits for the 44-year-old rap legend, who got his start in the gritty, Oscar-nominated "Boyz n the Hood." He's responsible for cult classics like "Friday" and "The Players Club," starred in kiddie-friendly flicks like "Are We There Yet?" and, in addition to the sequel to "Ride Along," is working on a film with a subject he knows plenty about — N.W.A.

Ice Cube talked about his filmmaking career, rap and his legendary group's omission from the most recent class of the Rock and Roll Hall of Fame during an interview with The Associated Press.

AP: You've appeared in everything from dramas like "Higher Learning" and "Three Kings" to comedies and kiddie movies like "The Longshots." Which genre do you prefer?

Ice Cube: It's easier for me to get comedies made because of my track record. Everybody needs to find their niche. I love dramas, but I understand that I am still just a young man in moviemaking. I know there will be some time to get back to that.

AP: You're still recording music, but why make the transition to also making movies in the 1990s? Were you seeing that music wasn't as fruitful?

Ice Cube: The creative process of making a movie really turned me on. I'd started getting behind the scenes with a camcorder and VHS tape when making music videos. But when I did 'Boyz n the Hood' with John Singleton, I saw someone my age who was really doing it behind the scenes. I felt like I needed to be doing it on that level. (John) challenged me to start writing. My first two scripts sucked, but my third was 'Friday.'

AP: But unlike John Singleton, you chose to focus on the humor in your South Central Los Angeles upbringing.

AP: When casting Kevin Hart in "Ride Along," which you produced and also starred in, it seems you foresaw his massive success. When did the conversation start about making the "Ride Along" sequel?

Ice Cube: When the studio saw the preview numbers, they were excited, so we are in good shape. It was something we weren't expecting, but we have a script and we might be ready to shoot in June or July. The film has also done well in Egypt and Lebanon. Hopefully we'll go to other territories, like hitting Australia with it.

AP: Shifting to music, reflecting on this year's Grammys, what are your thoughts on Macklemore & Ryan Lewis beating Kendrick Lamar for best rap album?

Ice Cube: It's typical. It's the Grammys, what do you expect? But for them to pass up true skills for what could be fly-by-night success. ... I don't want to dis anybody, but seriously.

AP: Are you upset that N.W.A. wasn't nominated for induction into the Rock and Roll Hall of Fame?

Ice Cube: It sucks. But it's understandable. We really only had one album together. They had two albums as a group. I'm sure that groups that have been together longer can make a better argument. But this just lets you know how much we need a hip-hop hall of fame of our own.