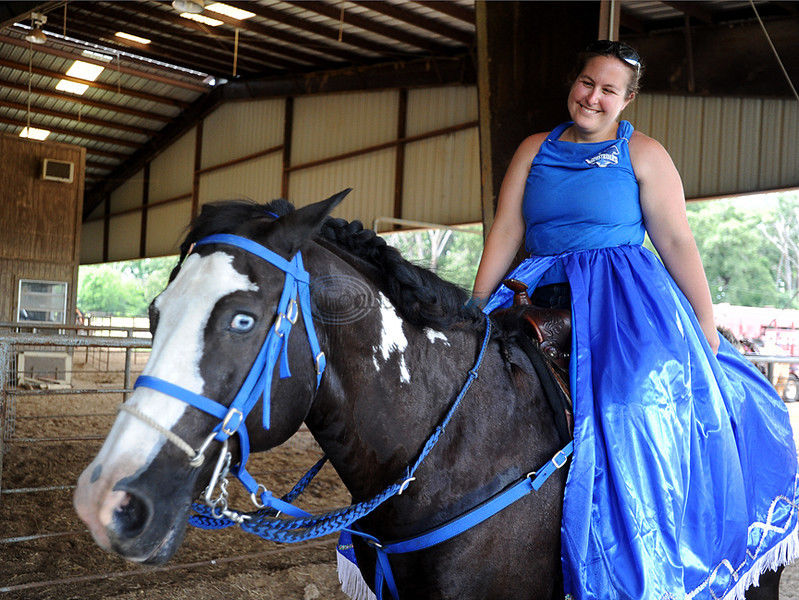 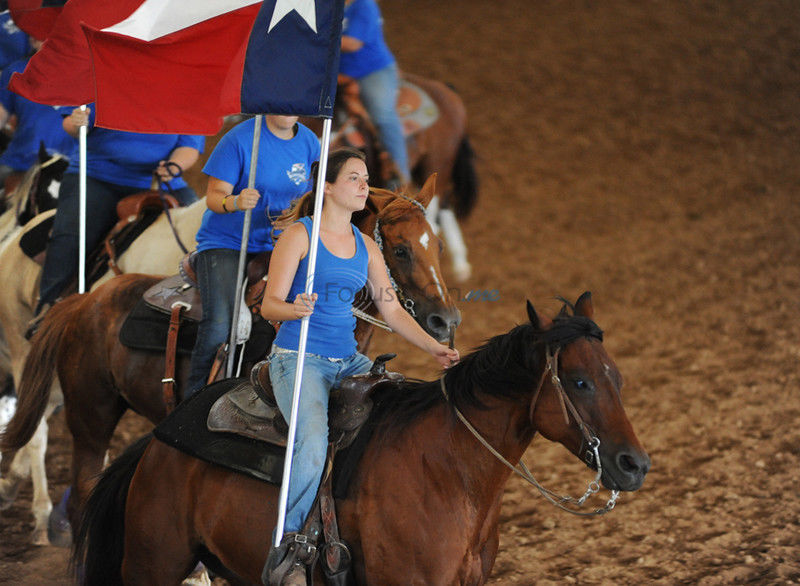 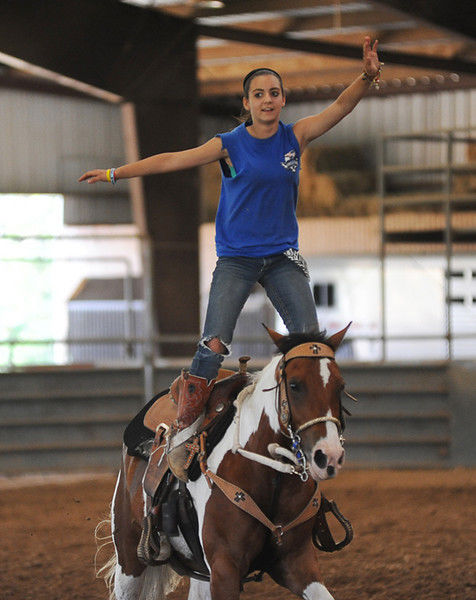 Victoria Sanders, of Canton, practices standing up on her horse, Zipper. (Victor Texcucano/Staff) 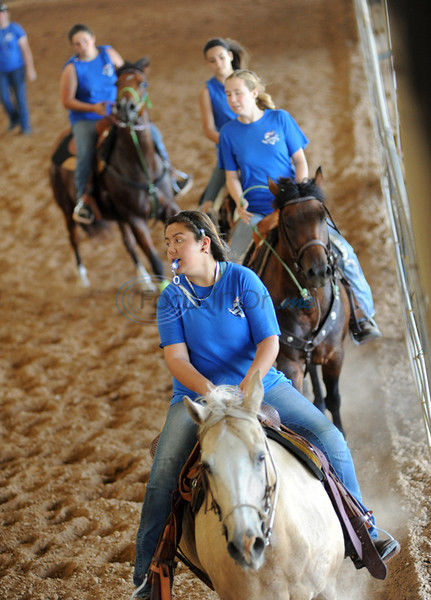 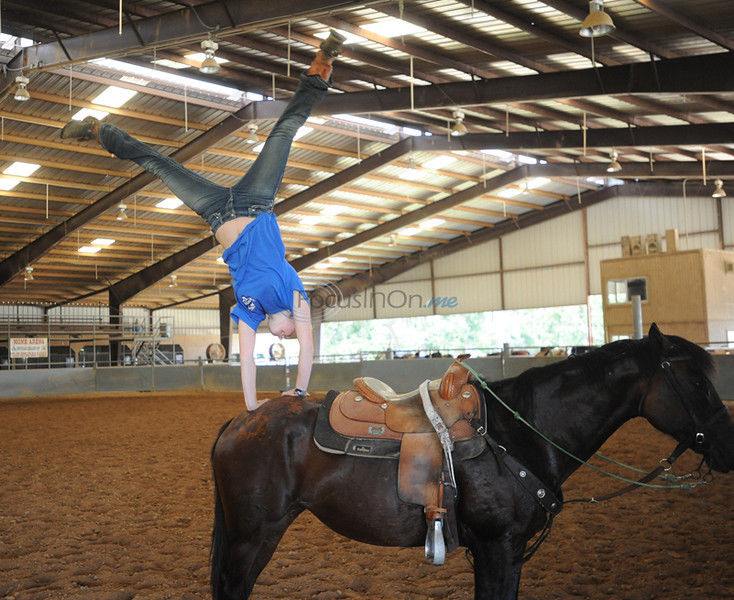 Franzi Moser, of Germany, dismounts from her horse with a cartwheel. (Victor Texcucano/Staff)

Victoria Sanders, of Canton, practices standing up on her horse, Zipper. (Victor Texcucano/Staff)

Franzi Moser, of Germany, dismounts from her horse with a cartwheel. (Victor Texcucano/Staff)

Crystial Dawson was interested in horses before she was able to say the word, but her hobby took the back burner as she built a career and raised children.

Two years ago, the former championship barrel racer happened on a team member of the Ghostriders equestrian drill team living across from a cousin and decided to give it a try.

The Ghostriders are the official rodeo drill team of Texas and have about 34 members, broken down into youth, adult and novice teams.

Equestrian drill team is purely for entertainment and is almost like synchronized swimming on horseback, said Sara Bass, a coach and choreographer with the Ghostriders.

Riders and horses dress in costumes and perform choreographed rides to music. Anything that is upbeat is on the table for use, including rock and roll, country, folk and pop tunes, and the rides can have a theme such or serve as a tribute.

The group will be competing against other teams from across the nation and Canada in the Super Ride XII International Festival of the Equestrian Arts 2014. The competition will be held in Texas Rose Horse Park, 14078 Texas Highway 110 West Tuesday through Saturday.

The competition includes the various drill team categories as well as vaulting — gymnastics and dance on horseback. Escaramuza, an all-female sidesaddle competition with roots in Mexican history, will also perform.

"I wanted something to do with my horse, something that was fun and to be around other horse people," said Ms. Dawson, a 43-year-old Greenville software engineer. "A lot of my friends, when I start talking horse, they zone out."

Pam Bonner, founder of the group and cofounder of the Super Ride competition, said she originally started the group around 13 years ago so she could perform drills with her daughter in a family-friendly environment.

She also helps choreograph the rides, which are different based on the skill level of the group. Judges are looking for HATS — horsemanship, alignment, timing and spacing — but the competition is visually appealing for an audience.

"When I'm drawing us a drill, I'm trying to make it look interesting when we come into the arena and when we leave the arena, and I want to be doing something in the arena constantly."

"We are pure entertainment, but it's based on … when the Calvary had to have maneuvers," she said. "We just took them and went to town on them and set it to music."

Ms. Dawson said it requires a lot of dedication to be a part of the group. The riders practice once to twice a week every month except for the holiday season, and they generally work with their individual horses in between practices.

"A lot of us used to do barreling racing, but it's too fast paced and I don't care to ride that fast and hard anymore," she said. "This is much more easy and fun and pretty — you get to dress up."

The group even has a few international riders participating this summer.

German rider Franzi Moser, 19, recently graduated from high school and is spending the summer in Texas on a ranch and working with the team.

She said switching from English to Western riding styles was a welcome change, but learning to perform with the drill team was a challenge.

"It's not that easy," she said. "I'm used to doing my own thing when I'm on the horse, but when you're riding you have to watch what the others are doing. If you're going too fast, you have to slow down and the horse doesn't like it, and you have to know the drill."

Emily Williams, 14, of Arp, has been involved with drill since she was about 4 years old and on the Ghostriders for two years. She was selected to be an All-star rider at this year's Super Ride XII competition. She will have two practices with other all-star members and then the group will perform a drill. The coaches pick the all stars from a list of criteria which includes technical ability and work ethic.

Ms. Williams said her favorite part is performing for a crowd.

"I don't think it's, hard I think it's fun," she said. "A new drill it's challenging at first but then it's easy. I like to be in the area and to perform."

The Super Ride will have a few new features this year including a wine tasting event and cancer fundraiser.

On Friday at 7 p.m., the inaugural Hope in the Stars benefit will take place at 7:30 p.m. with a concert featuring Clay Thrash and Wade Hayes, and a special mounted performance by the all-star team will feature cancer survivors participating in the show. One survivor will be paired with one rider for the event.

The display is anticipated to show strength and unity in the fight against advance cancer.

A complete schedule of events is available on the Super Ride website, www.superride.org.

Admission is $5 for parking and $5 for adults 12 and older, or $20 for a pass for every day. The festivities also will be recorded and broadcast on HRTV — The Network for Horse Sports.