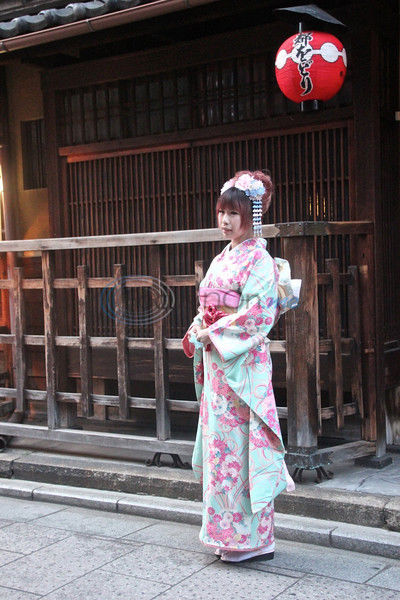 A young girl dressed as a Geisha stops for a photo while strolling by the original tea houses and restaurants of the Gion district in Kyoto, Japan. (Patricia Sheridan/Pittsburgh Post-Gazette/MCT) 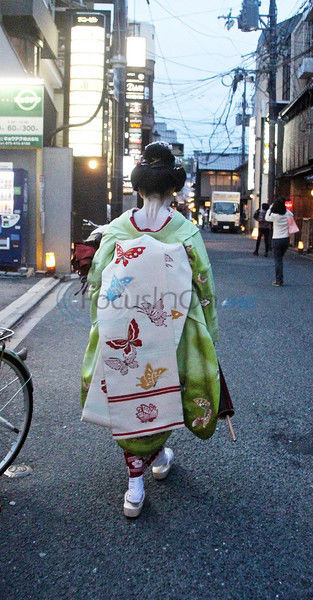 A geisha in training is evidenced by extra material on the back of her kimono, in Kyoto, Japan. (Patricia Sheridan/Pittsburgh Post-Gazette/MCT) 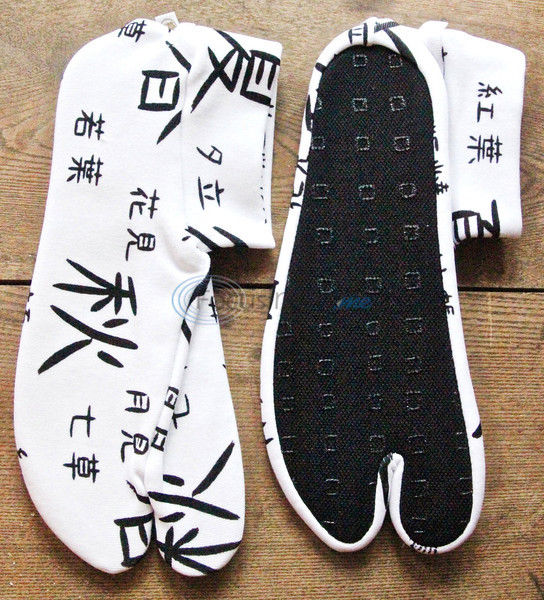 A young girl dressed as a Geisha stops for a photo while strolling by the original tea houses and restaurants of the Gion district in Kyoto, Japan. (Patricia Sheridan/Pittsburgh Post-Gazette/MCT)

A geisha in training is evidenced by extra material on the back of her kimono, in Kyoto, Japan. (Patricia Sheridan/Pittsburgh Post-Gazette/MCT)

KYOTO, Japan — Like ghosts from another time, the real geisha seem to float silently along the streets at twilight, making their way to tea houses and restaurants where they will entertain elite, powerful men.

Trained to be exquisite hostesses, they are accomplished musicians, singers, dancers and most importantly conversationalists. To have a geisha in your company, to be in the presence of a beautiful, articulate, talented companion for the evening, is considered a status symbol. Their clients used to be samurai and shogun. Now it's politicians, actors and corporate CEOs who hire the geisha by the hour for private dinners at ryotei (traditional Japanese restaurants) and ochaya (tea houses).

They are not courtesans or prostitutes. Before World War II, a geisha's virginity was auctioned to the highest bidder, but sex is no longer part of the transaction. To be a geisha is to be part of a community, a vocation. They are career women. They are performance artists.

An endangered species, the numbers of real geisha in Japan are dwindling. From a reported 80,000 throughout Japan in the early 20th century, they now number only a few thousand. "In Kyoto, there are about 150 geiko — geisha in the local dialect — and maiko, geisha in training, left in Kyoto," according to Anne Alene, an in-country guide for a recent trip to Japan arranged by the Carnegie Museums of Pittsburgh Travel Program.

The group toured the Gion district, one of several historically preserved neighborhoods in Kyoto and the place where the 2005 movie "Memoirs of a Geisha" was filmed. It was based on the novel of the same name by Arthur Golden.

In Kyoto, authentic geisha are not nearly as prevalent as faux geisha — young women who dress in traditional Japanese kimono complete with obi, white tabi socks and wooden geta sandals. While they enjoy being stopped by tourists to have pictures taken, wearing traditional ensembles also appeals to the Japanese reverence for ritual and tradition.

"For many Japanese girls, it's fun to dress up in something they would never ordinarily get to wear," said Amy Boots, executive director of the Japan-America Society of Pennsylvania.

Visitors can also give it a try. In Kyoto, there are several places that rent a kimono ensemble or the men's version, a black kimono with montsuki haori, the short coat over top.

"Kimonos have many layers and are difficult to put on without a helper," said Katsuko Shellhammer, education outreach coordinator for the Japan-America Society of Pennsylvania. "They are also very expensive, and seasonal patterns are important. It can be like wearing a piece of art."

Department stores in both Tokyo and Kyoto have sections dedicated to kimono wear; you can buy off the rack or have a custom-made kimono and obi from the bolts of material offered.

A less expensive option is a used kimono, and there are many stores that deal strictly in pre-owned. Kimonos are often passed down from mother to daughter.

Modernizing the look is all about the material and new, more graphic patterns. Sou Sou, a Japanese clothing company, has taken the plain tabi shoe and sock and covered them in a riot of color and designs.

They have also re-imagined other traditional Japanese garments.

Just looking like geisha is not enough for some young women.

Turning away from Hello Kitty and the modernity of Japanese life, they make the choice to earn a living as a geisha. Maiko as young as 15 must live in the geisha house, or okiya, learning the nuances of life under the robes and white makeup. The apprentice period lasts between three and five years, during which the okiya and the geisha mother invest in them, paying for lessons and kimonos and providing room and board. Maiko, pronounced MY-ko, are tested before they can advance. At the erikae ceremony, they don the white collar of geisha.

Twice a year, in spring and fall, the public is treated to a display of geisha talents during the Miyako Odori at the theater in the Gion district. The 142nd annual Miyako Odori was held earlier this month during the Carnegie Museums group's visit.

The travelers enjoyed a glimpse into this exclusive world, including a very brief tea ceremony with a complicated etiquette that must become second nature to real geisha.

As the living embodiment of history and fantasy, geisha are not allowed to marry — ever. If they do they must leave.

"Geisha and maiko are very special to the Japanese people. They are part of a separate world from ordinary Japanese life," Boots said.

WHO WE ARE TMT
40 U 40 Nomination Period