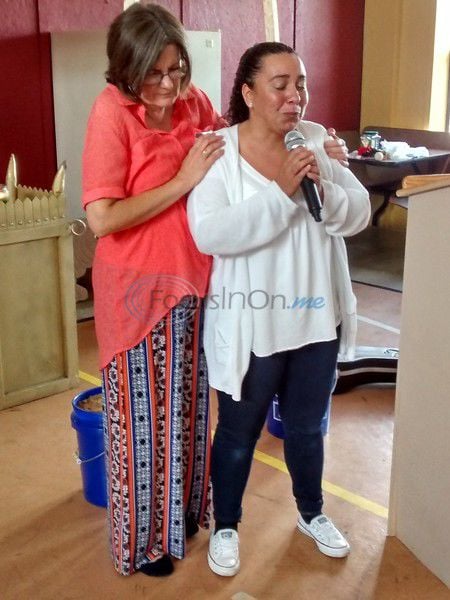 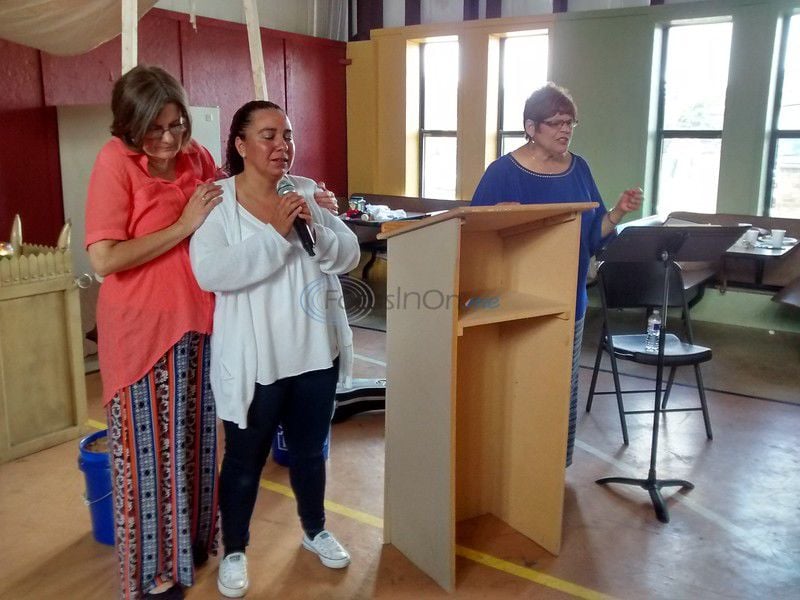 The turning point during Hannah Overton's seven years in a maximum security prison came when she realized God wanted her to help those around her.

"The Bible's telling us that as we labor to heal others, our scars will heal," she said after reading Isaiah 58:6-8. "I had a hope that they did not and I began to share that hope with them."

Mrs. Overton, 38, shared her testimony Friday at Calvary Commission's 38th Annual Breakthrough Prayer and Missions Conference in Lindale. About 85 women, some of whom have spent time in jail or prison themselves, attended the breakfast event. The conference continues today.

Convicted of capital murder in 2007, Mrs. Overton was sentenced to life in prison without parole for the death of 4-year-old Andrew, a child she and her husband were in the process of adopting. He died of salt poisoning.

The defense suggested that, among other things, Andrew had an undiagnosed eating disorder called pica, which causes people to eat non-food substances, and that he could have accidently poisoned himself.

Witnesses testify that Mrs. Overton was an attentive parent and the defense attorney said she had no motive to kill Andrew, according to the Texas Monthly story.

Mrs. Overton was released on bond in December after the Texas Court of Criminal Appeals overturned her conviction citing ineffective representation from her lawyers, according to the Corpus Christi Caller-Times.

In April, Nueces County District Attorney Mark Skurka dismissed the case, citing a "myriad of factors which came about after a careful review of the previous trial," according to the Caller-Times. He said, "Dismissal does not equate to exonerated."

Today Mrs. Overton and her husband, Larry, travel around the country speaking. They recently launched Syndeo Ministries, which provides Bible studies to women who are incarcerated and seeks to pair them with mentors in the free world. Long-term goals include creating a camp for children whose parents are incarcerated, a transitional home for women who are released, a hospitality house for family members who are visiting inmates and a ministry to correctional officers.

But before this ministry was born, Mrs. Overton experienced a lot of heartache.

Mrs. Overton said she started questioning everything after Andrew's death and her subsequent conviction and imprisonment for "a crime that I didn't commit."

"If God loved me, how could he let this happen to me?" she said. "For seven years God proved to me by His very nature that He is enough."

Grounded in the Christian faith as a child, Mrs. Overton said she was comfortable in her beliefs. That was until her world turned upside.

When Mrs. Overton stepped inside the Dr. Lane Murray Unit in Gatesville, she entered a world unlike any she had experienced before. It was a place where she said people got their faces sliced open, were beaten up and were raped by officers and inmates.

She said when she was transferred from the county jail to the prison, she couldn't see what God was doing, but when she looks back today, she is amazed at how he took care of her.

The woman next to her in prison was a woman who Mrs. Overton said was innocent and also had children at home, so the two became friends.

God surrounded her with a group of women who had spent a lot of time in prison so they knew the ropes and they had "settled down a lot," she said.

These women recognized that Mrs. Overton was in an unfamiliar world and that she wouldn't survive that world. So they took it upon themselves to protect her.

"I was protected and provided for by this group of women who weren't even believers," she said, "but God had his hand on this situation both for me and for them."

After two weeks, she was put on one of the best jobs in the unit and the woman who trained her is now the person who took her place leading the inmate Bible study.

Despite these positives, Mrs. Overton struggled. Fear consumed her, and she just wanted to go home and take care of her children.

One day, while talking to God, she told him that she couldn't get rid of the fear and she felt condemned because of how many times the Bible tells people to not fear.

She said it was like she kept trying to put her fear in a box and close the lid and it would just pop back open.

"At that point, I saw Jesus sitting on that box," she said. "He told me that between me and that box is where He needed to sit."

After that, though she still felt scared at times, she said she always saw that image of Jesus sitting on the box.

"I knew the one person that I could trust with all my fears," she said.

In response to her many questions, God provided answers through scripture.

Why would He let this happen?

"He allowed this because He loved me and He knew that in His strength not only could our family make it, but that this would be used by Him for great things," she said.

How could she make it through this?

Her then 8-year-old Isaac provided this answer when after crying to his dad that he couldn't live without his mommy, he opened his Bible to Philippians 4:13 which reads, "I can do all things through Christ who gives me strength."

How did God expect her to live without family and friends?

God answered her in John 10:10, which reads, "The thief comes only to steal and kill and destroy; I have come that they may have life, and have it to the full."

"Is God enough?" she said. "My answer to that question is simple."

She read 2 Corinthians 9:8 which says, "God is able to bless you abundantly, so that in all things at all times, having all that you need, you will abound in every good work."

The Overtons still live in Corpus Christi, but are contemplating a move to central Texas, which Hannah Overton said would be a good location for their ministry.

The Overton children are 16, 14, 13, 11 and 8. She said surprisingly the family has melded together very quickly after her release.

During her seven years in prison, she saw her kids about once a month and saw her husband every week.

He drove 10 hours round-trip every weekend to see her for two hours and only missed a handful of weekends in that time, she said.

Friends homeschooled her children while she was incarcerated and she prepared lessons to send to them.

She says her church family in Corpus Christi helped to share with her children their mother, her personality, her likes and dislikes, so that she remained present, in a sense, in their lives.

In prison, she started a Bible study with a couple other people. It now has about 75 women attending and continues today with a different leader.

Through Syndeo Ministries, the Overtons are encouraging churches to get involved in prison ministry. She said it's not the government's job to rehabilitate inmates, but the church's.

She returns to the Dr. Lane Murray Unit in Gatesville, where she was, about once a month to visit inmates. Visit syndeoministries.com for more information.

The Calvary Commission conference continues today. The free event is open to the public and runs through Monday at Calvary Commission's World Commission Center, 15983 Country Road 4140, on Creekwood Ranch in Lindale. Visit www.calvarycommission.org/conference.asp or call 903-882-5501 for more information.

Calvary Commission's Labor Day Bar-B-Q Blast will start at 2 p.m. Monday. Activities will include games, musical and drama presentations, a carnival and fishing tournament. Food will be served at 4 p.m. Cost is $5 per person or $15 per family. The public is invited.