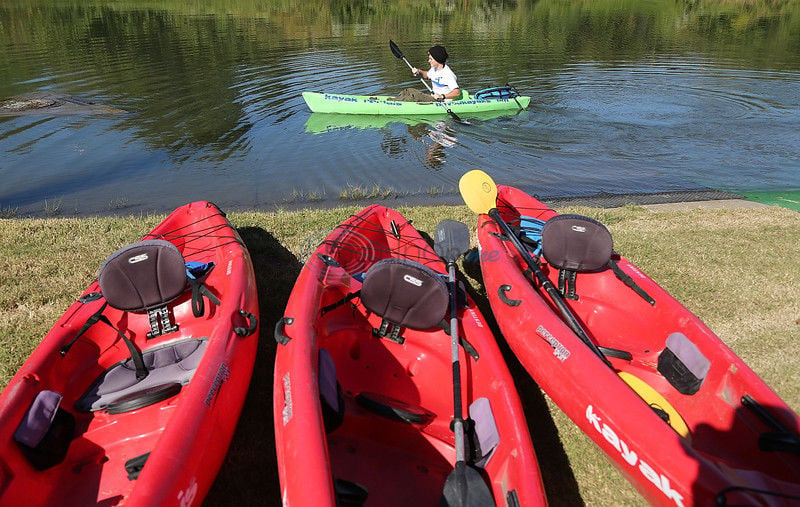 In this photo taken on Oct. 26, 2013, Aubrey Saunders, who works for Bayoukayaks with some of the boats she rents at Bayou St. John in New Orleans. Multiple companies now offer group tours along Bayou St. John, and others rent paddle-powered craft for self-guided trips. (AP Photo/The Advocate, Eliot Kamenitz) 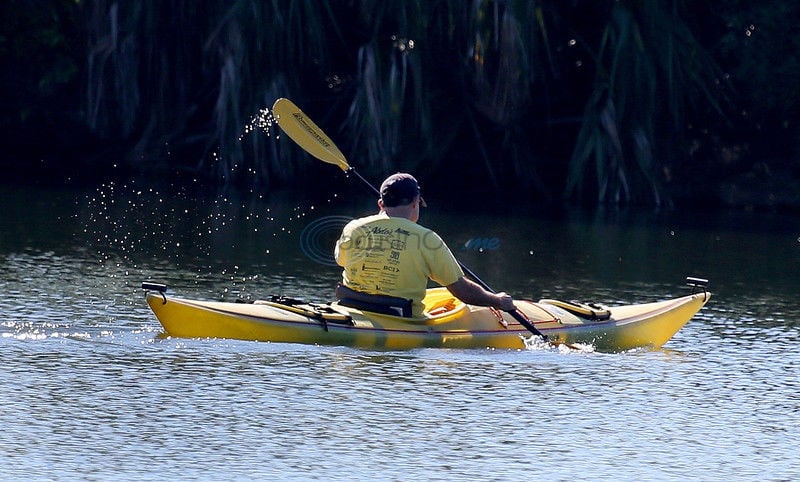 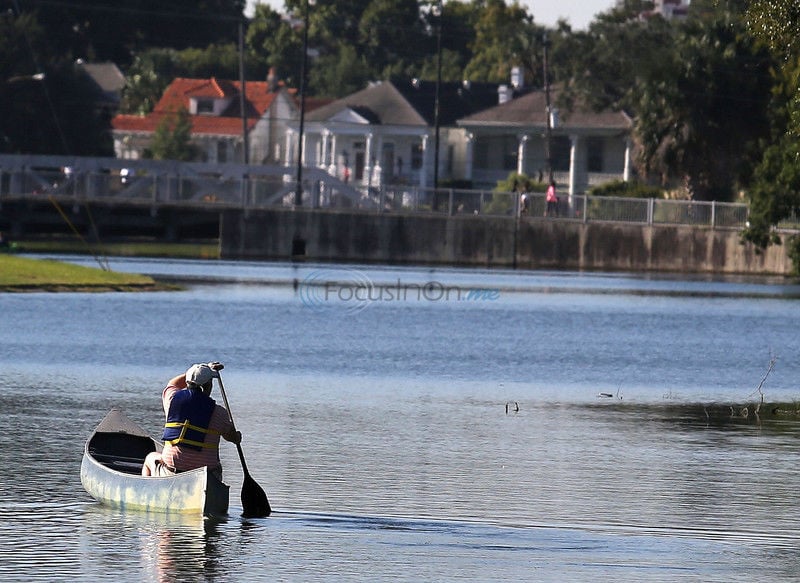 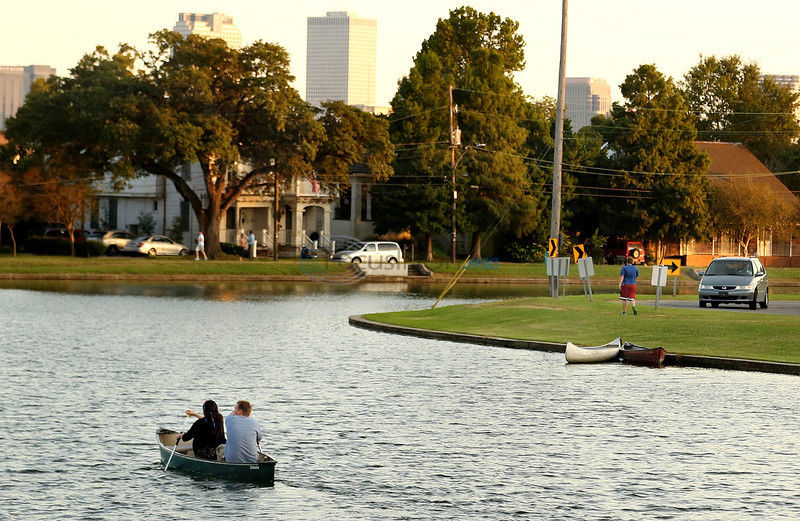 In this photo taken on Oct. 26, 2013, Aubrey Saunders, who works for Bayoukayaks with some of the boats she rents at Bayou St. John in New Orleans. Multiple companies now offer group tours along Bayou St. John, and others rent paddle-powered craft for self-guided trips. (AP Photo/The Advocate, Eliot Kamenitz)

NEW ORLEANS — On a quiet morning one autumn Sunday, a red streetcar rolled to its stop between City Park and Bayou St. John, bicyclists pedaled along paved trails paralleling the bayou's course and, at the water level, a small flotilla of kayaks pushed off from the banks.

"We're going to see the heart and soul of our city," said Sara Howard, who was leading the outing from her small local tour company Kayak-iti-Yat.

What followed, after a few gentle collisions between inexpert paddlers, was a placid trip along a narrow waterway that teems with New Orleans history.

Stretching from Lake Pontchartrain into what's now the center of the city, Bayou St. John played a crucial role in the founding and growth of colonial New Orleans, providing faster access to the nascent city in the age of sail. Through the centuries it has served as an industrial, scenic and sometimes even spiritual resource. More recently, however, it's emerged as an urban oasis for outdoor recreation, a way for city dwellers to quickly reconnect with the water.

The retail and rental operation NOLA Paddleboards even conducts waterborne yoga sessions on the bayou. Schoolchildren are taking to the water through private tours and the state's Louisiana Outdoor Outreach Program, and many more residents are bringing their own small boats to explore the unique blend of Louisiana nature and New Orleans history that runs along the bayou's four-mile course.

"It's pretty amazing," said Anthony Schoenecker, an engineer who was taking his first paddle on Bayou St. John with Kayak-iti-Yat. "Just being able to see the architecture from this angle, from the water, and learning about the history, it helps put the pieces together. After you stop paddling you can just glide and take it all in."

While there have always been a few outdoor enthusiasts eager to dip a canoe into Bayou St. John, the boom in waterborne recreation here comes as a recent and dramatic change.

"A few years ago it would be hard to see this happening," said Chad Almquist, who helps run his family's outdoors tour company Canoe & Trail Adventures.

His parents first started the business in 1973 as a retailer of paddling and camping gear. It was located right along Bayou St. John near Orleans Avenue, but Almquist said customers showed little interest then in exploring the urban waterway right outside their door. The family business later switched from sales to guided group trips through wilderness areas around the region. Only recently have people started requesting outings along Bayou St. John.

"I think it's people saying, ‘Why don't we use this valuable resource that's just sitting there in front of us,'" Almquist said. "After Katrina, there are new ideas, people are giving things a new look, and I think this is part of that."

Events along the bayou may have helped focus that new perspective. During the New Orleans Greek Festival and the Mid-City Bayou Boogaloo, two springtime celebrations held at opposite ends of Bayou St. John, hundreds of people take to the water in all kinds of craft. In 2012, the Krewe of Kolossos began its now-annual Fourth of July boat parade on the bayou as well.

Bayou St. John may have always been picturesque, but many generations of New Orleanians grew up knowing the waterway as stagnated, possibly polluted and best avoided. But the renewed recreational interest on Bayou St. John has coincided with improving fortunes for its ecology. Earlier this year, a dam that had severely constricted the water exchange between Lake Pontchartrain and the bayou for half a century was removed. Now, there's a managed release of water through modern floodgates at the mouth of the bayou.

"You can look at it from a biological, environmental or recreation perspective and either way it's all good," said Rusty Gaudé, a state fisheries scientist who helped marshal the dam removal program.

"Water quality is light years different from where it was just a few years ago," he said.

Rhonda Ardoin, a Lafayette native who started her Bayou Kayaks rental operation in 2010, said Bayou St. John is an ideal spot for people to familiarize themselves with paddling.

"A lot of first timers like the bayou because they don't have to navigate, they don't need special skills, you can't get lost," she said. "Families like it because it's easy, they don't have to prepare for so many contingencies. If it rains, you just go under a bridge for a while until it blows over."

Tourists are taking advantage of the bayou, too, especially those traveling from areas with more robust paddling cultures, said Jeff Lakey, owner of NOLA Paddleboards. Many will take the Canal streetcar from downtown hotels for a day on the water, followed by a spin through Mid-City restaurants and bars, he said.

But by and large the boom of boating here is driven by locals eager to enjoy their city, said Sonny Averett, co-owner of Kayak-iti-Yat.