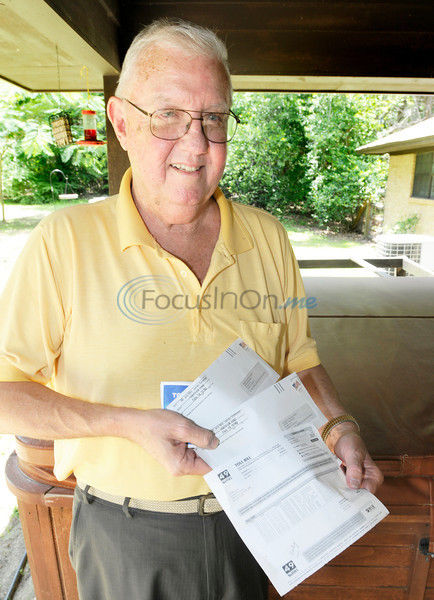 Retirted Air Force Mst. Sgt. Jim Simmons, 71, received two bills for driving on Loop 49 when disabled veterans are allowed to drive without paying the toll. He uses the toll road to vist veterans at The Hospice of East Texas and area nursing homes. Photo by Herb Nygren Jr. 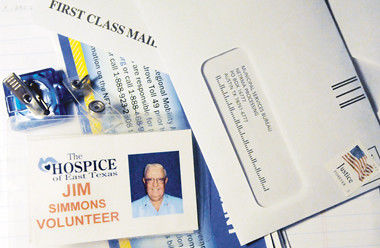 Jim Simmons, 71, received two bills for driving on Toll 49. Disabled veterans were formerly allowed to drive without paying the toll. He uses the toll road to vist veterans at The Hospice of East Texas and area nursing homes.

Retirted Air Force Mst. Sgt. Jim Simmons, 71, received two bills for driving on Loop 49 when disabled veterans are allowed to drive without paying the toll. He uses the toll road to vist veterans at The Hospice of East Texas and area nursing homes. Photo by Herb Nygren Jr.

Jim Simmons, 71, received two bills for driving on Toll 49. Disabled veterans were formerly allowed to drive without paying the toll. He uses the toll road to vist veterans at The Hospice of East Texas and area nursing homes.

Jim Simmons, 71, is a retired and disabled Air Force veteran who used to travel Toll 49 most every day free of charge, helping dying veterans and their widows learn about their survivors' benefits.

Simmons volunteered for this mission, he said, because he thinks it is important to help serve those who have served our country.

"I get a lot more from it than I give," he said, smiling.

But since the Northeast Texas Regional Mobility Authority took control of the toll road from the Texas Department of Transportation in March, the disabled veterans have begun receiving bills from that authority, charging them fees for driving on Toll 49.

Simmons received two bills in the mail on Monday — one was for $13.68 and the other bill was for $16.36. The fees were from trips he made in April on Toll 49. He still plans to make his trips to help veterans, but he says he won't be using Toll 49 to do it.

"I have no problems paying the fee because I can afford it –- but there are others out there who can't afford the fee," he said. Simmons, who has suffered several heart attacks and is considered 100 percent disabled, added that he wouldn't have a problem with the charges if NETRMA had just let the disabled veterans know about it.

Everett Owen, interim director for the NETRMA, said in a prepared statement that to accommodate special transaction processing for veterans on Toll 49 would require software development and testing.

"As a small tolling authority just beginning our first year of assuming operations, we must operate in a financially efficient manner," Owen stated in his letter. He said in the statement that the authority is "continuing to explore what other opportunities are available that could be feasible to implement a Veteran's program."

Owen stated that the NETRMA partners with the Central Texas Regional Mobility Authority in Austin because, "They have an efficient and sound transaction processing model."

State Sen. Kevin Eltife, R-Tyler, said in a released statement Tuesday that he didn't see why toll fees for disabled vets were not already being waived.

"I will do what I can to help anyone affected by those issues," he said in the statement.

The Harris County Toll Road Authority does waive tolls for disabled veterans, as does TxDOT on the toll roads it manages in the Austin area, Cheryl Vanek, chief of staff for Eltife, said in an emailed statement about the issue that it has been discussed in current and prior legislative sessions. However, other tolls roads in the Austin area managed by the Central Texas Regional Mobility Authority do not have tolls waived, she said in the statement.

In 2009, lawmakers passed legislation that allowed toll projects to waive tolls for wounded or disabled veterans — specifically customers whose accounts relate to a vehicle registered with Disabled Veterans, Purple Heart or Medal of Honor specialty license plates, Ms. Vanek said in her statement. But that 2009 legislation was not mandatory.

Officials with regional toll projects, including the NETRMA and the Cameron County Regional Mobility Authority along with the CTMA, had said at that time that there would be no significant financial impact if the 2009 bill were passed.

However, the North Texas Tollway Authority, which manages the Dallas Toll Road system, said that if the 2009 legislation was passed, the financial impact to it would be $2.9 million to $7.8 million annually, Ms. Vanek said in her statement.

In this legislative session, a bill was introduced that would have made it mandatory for the Purple Heart, Disabled Vet and Medal of Honor veterans groups to not pay toll fees. But that legislation was amended in the House to limit this to only vehicles with the Legion of Valor license plates, Ms. Vanek said. That bill is on Gov. Rick Perry's desk awaiting his consideration, she said in her statement.