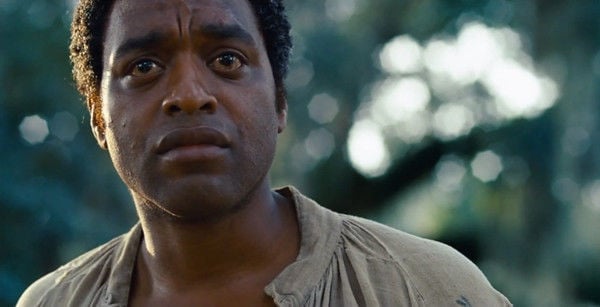 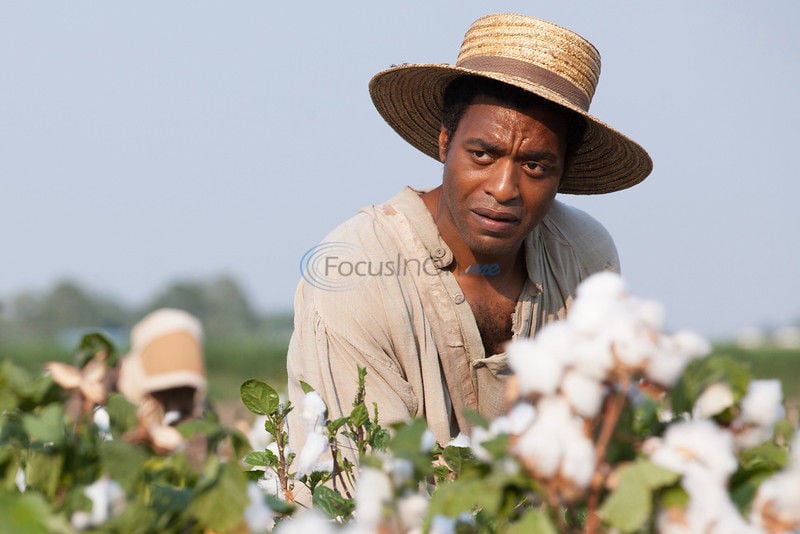 Slavery in the United States is a rare topic to be addressed by Hollywood, and when it is brought up it's usually only examined through a diffusing lens, i.e. last year's "Django Unchained." Rarely is slavery ever discussed and examined head on, and certainly never with the sort of frank, unflinching approach which director Steve McQueen (no, not that Steve McQueen) employs here. I can think of no other film that manages to feel so comprehensive in its depiction of every facet of slavery than this.

The film tells the story of Solomon Northrup (Chiwetel Ejiofor). In 1841, Northrup was a free black man living in Saratoga, NY. Making his living as a carpenter and violin player, Northrup enjoyed the same free lifestyle that any white man would have at the time, including owning a home, which he shared with his wife and two young children.

However, after being wined and dined and promised a lucrative touring gig by two strangers, Solomon awakes to find himself locked in chains and soon sold into slavery. Now forced to go by the name "Platt," Solomon struggles to not only survive, but to persevere and never lose hope of regaining his freedom.

While that might sound all nice and inspiring, make no mistake, this is a harrowing film. As I said earlier, I cannot recall another film that is so thorough in its depiction of all matters related to slavery. Whether it's being tossed off the boat and immediately purchased (only to be re-sold again), or a mother being forcefully ripped apart from her children, Solomon's (relatively) humane treatment by his first owner (complete with gifts and supervisory roles), the sight of former slaves being waited on by their own slaves, or the extremely graphic sight of a slave girl being relentlessly whipped, it's all depicted with a starkness that feels immediate and real.

What's perhaps most impressive about McQueen's direction is his restraint on all points. He doesn't make the plantation owners into cartoonish villains (though he certainly doesn't excuse or ignore who they are or what they do). He doesn't sensationalize the moments of horrific violence with flashy camera angles or editing. Hans Zimmer's musical score is about as understated as a score can be.

Perhaps most importantly though, McQueen knows when to simply pull back, let his actors work and allow the audience to soak in the moment. This results in moments of both quiet reflection and also relentless discomfort. We are given portraits of Solomon, moments to consider his strength of character, his resolve, his brutal mistreatment.

At the center of it all is Ejiofor. An actor whom I have long enjoyed and respected, Ejiofor has never really had the opportunity to be front and center and show a wide audience what he is truly capable of. Here, he gives a career-defining performance, portraying Solomon as a bulwark of dignity and determination, of unflinching resolve and principle. It is as remarkable a performance as I have seen this year, one that I can only hope will propel Ejiofor to a new level of visibility and opportunity. The restraint and grace with which he depicts Solomon is the sort of acting that comes only rarely anymore.

In contrast to Ejiofor's dignity and grace is Michael Fassbender as Solomon's owner, Edwin Epps. Though Solomon would spend the first portion of decidedly gracious owner, Mr. Ford (Benedict Cumberbatch), it is Epps who is the ostensible villain of the piece. This is where restraint is further appreciated and necessary (both on McQueen and Fassbender's part). Epps is the "face" of slavery here, greedy, vile, destructive and unrepentantly evil. And yet (thanks to McQueen's direction and Fassbender's tremendous performance) it never feels reductive or cartoonish, nor does it feel as though there is a lack of depth to the man we see. It's a tremendous feat to pull off considering the circumstances and given the character as written, but it's just one more example of the amazing craft on display here.

It's difficult to express just how important "12 Years a Slave" feels, both as an experience and as a piece of cinema. Far too often our films will scoot around issues or tackle them in ways that feel disingenuous or disproportionate. What McQueen gives us is a film that delivers the perfect amount of artistic expression without ever diluting the truth of what is being shown. American slavery is a subject that we should never stop discussing, never stop examining and never stop trying to learn from in the hope that nothing like it will ever again be a part of our history. It is films like this which help ensure that can and will happen.

I can't say that I enjoyed watching "12 Years a Slave," but I was undoubtedly moved and enriched by the experience. This isn't simply Hollywood ladeling on "White Guilt," it is one of the year's best films and is absolutely essential viewing for anyone wishing to gain perspective on one of our country's darkest periods.

"12 Years a Slave" is currently playing in Tyler at the Carmike Cinemas theater.