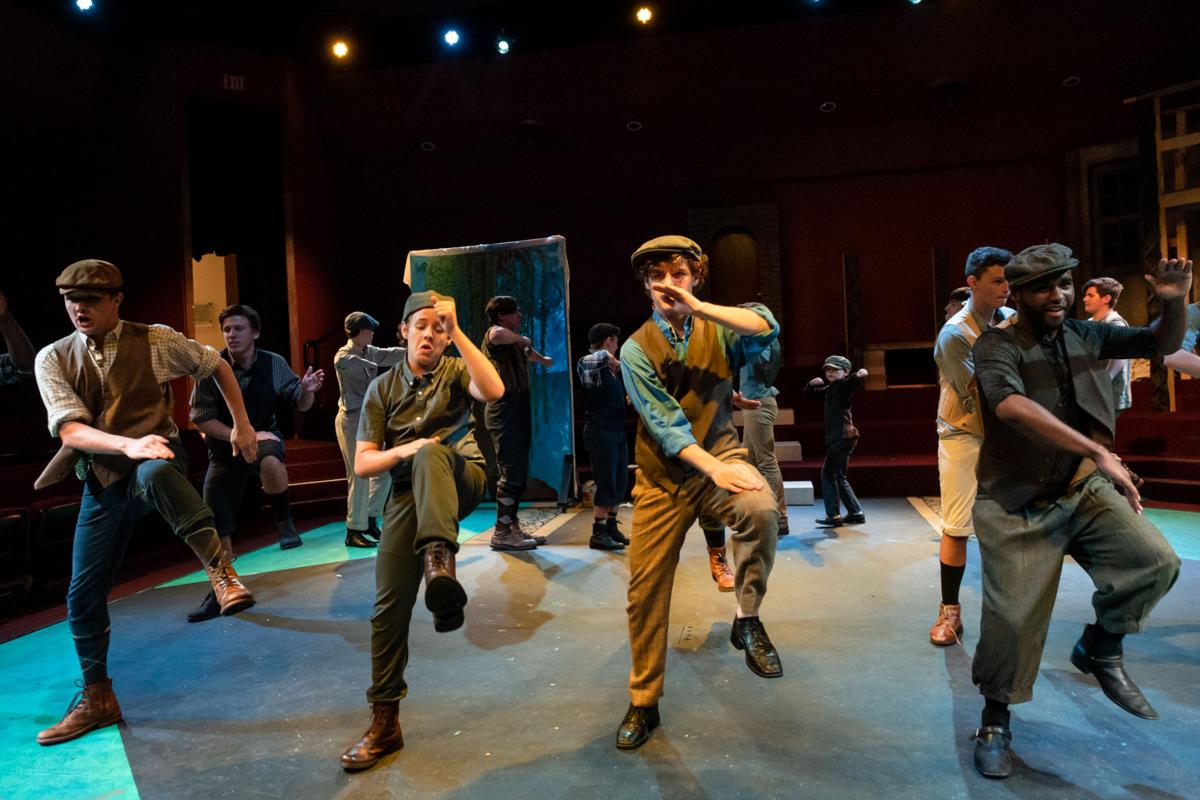 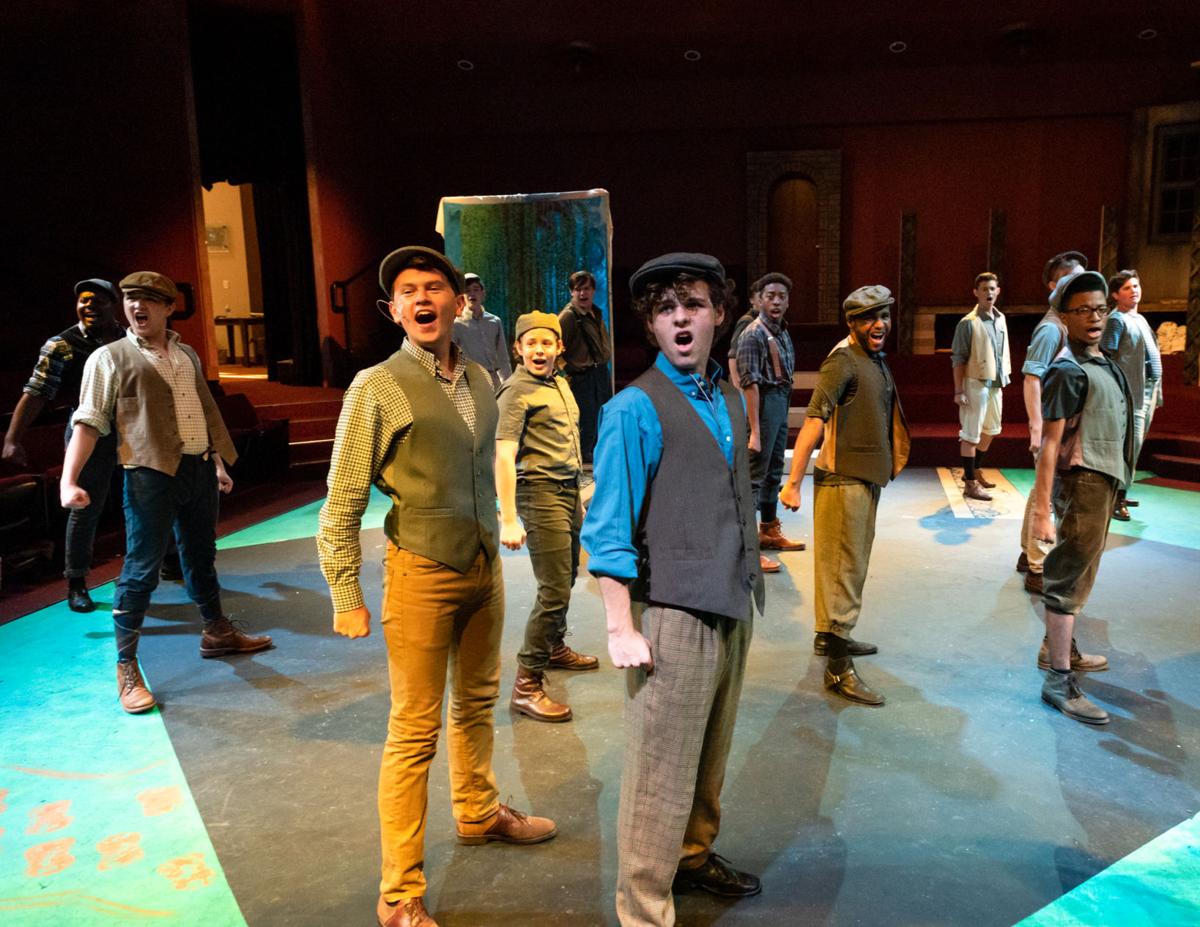 cara Campbell/staffCast members of Tyler Civic Theatre’s production of Disney’s “Newsies the Musical” perform “Seize the Day” during a dress rehearsal in Tyler. Below, Lizzy Tucker, portraying Katherine Plumber (left), and Collin Skelton, as Jack Kelly, perform a scene together. 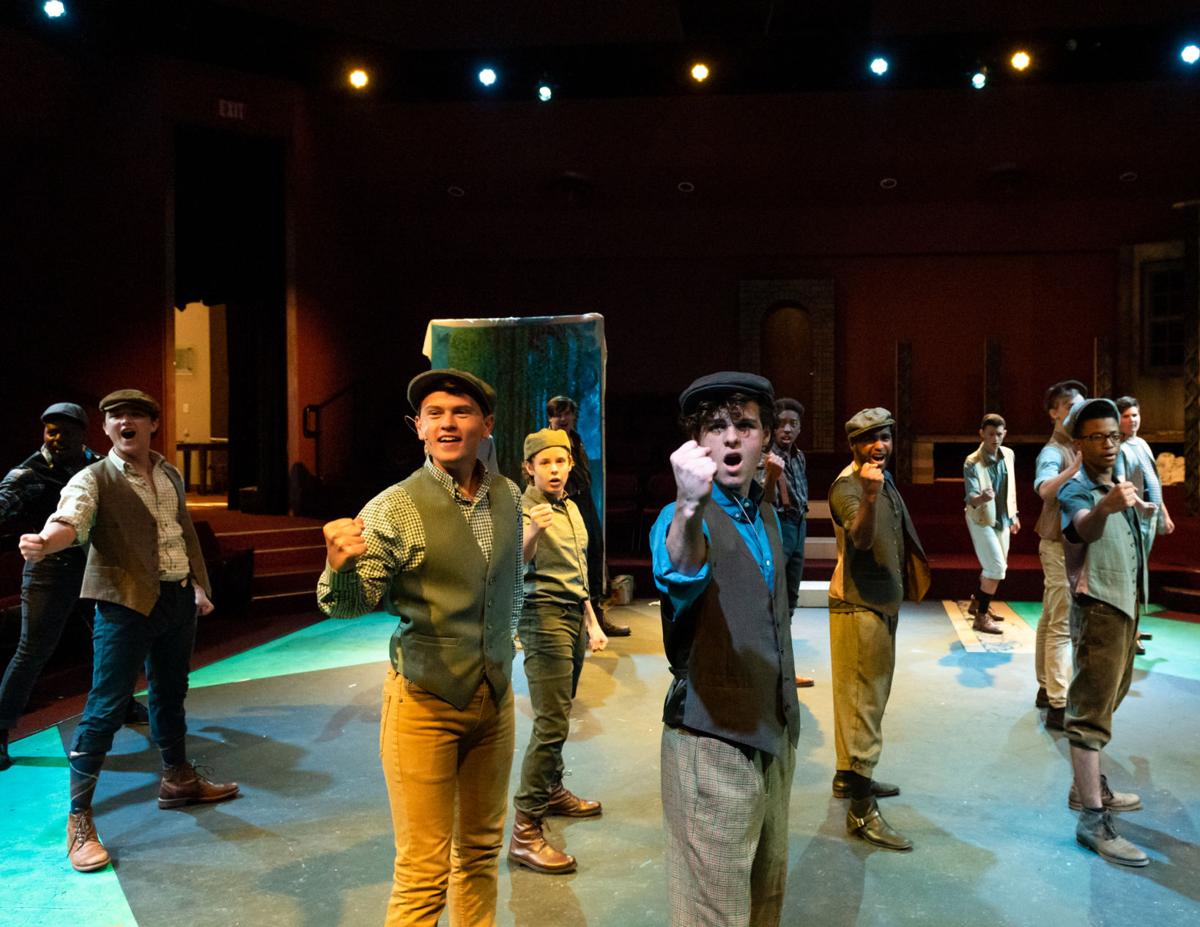 Cast members of Tyler Civic Theatre's production of Disney's "Newsies the Musical" run through a number during a dress rehearsal in Tyler. (Cara Campbell/Tyler Morning Telegraph) 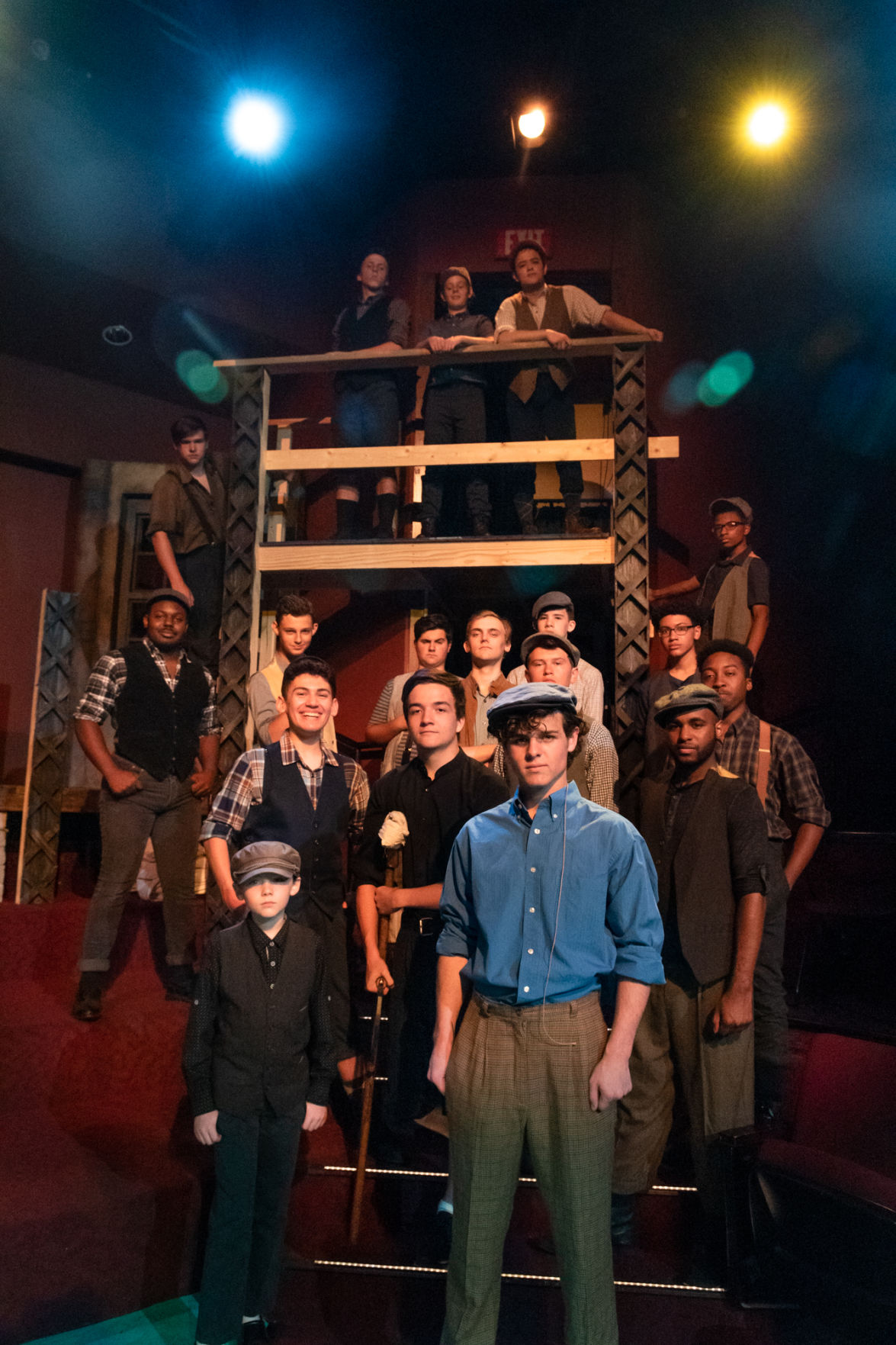 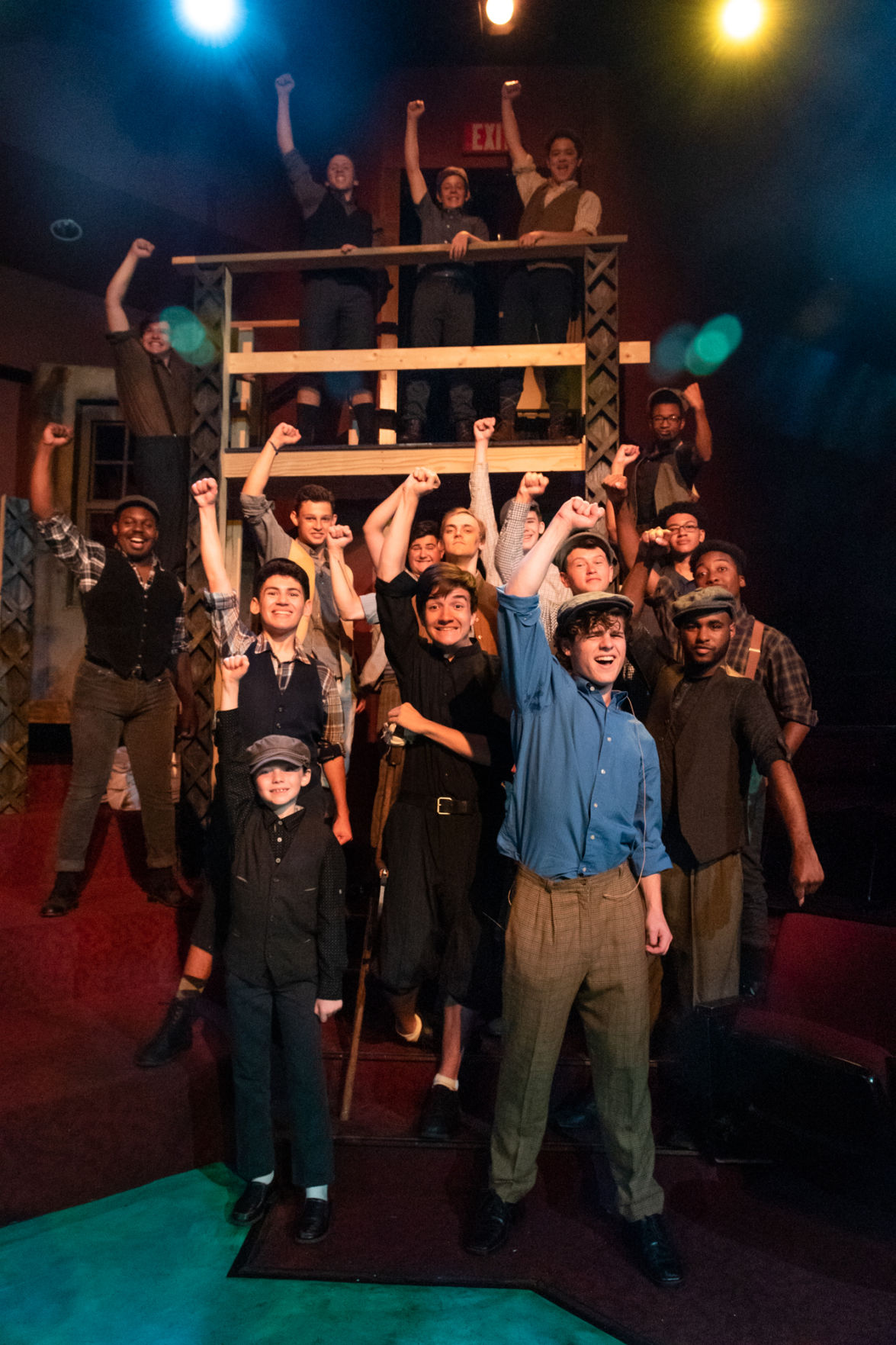 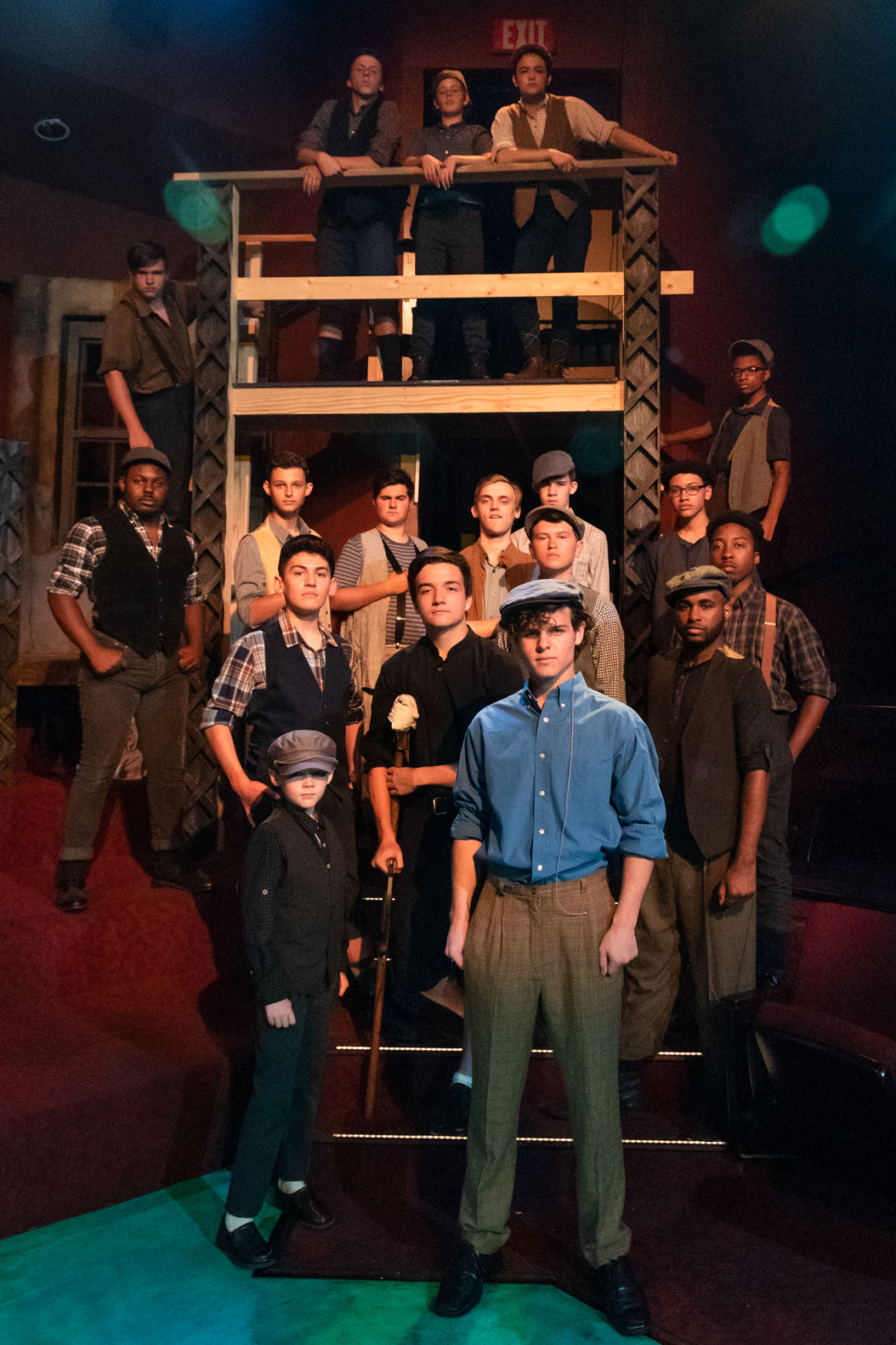 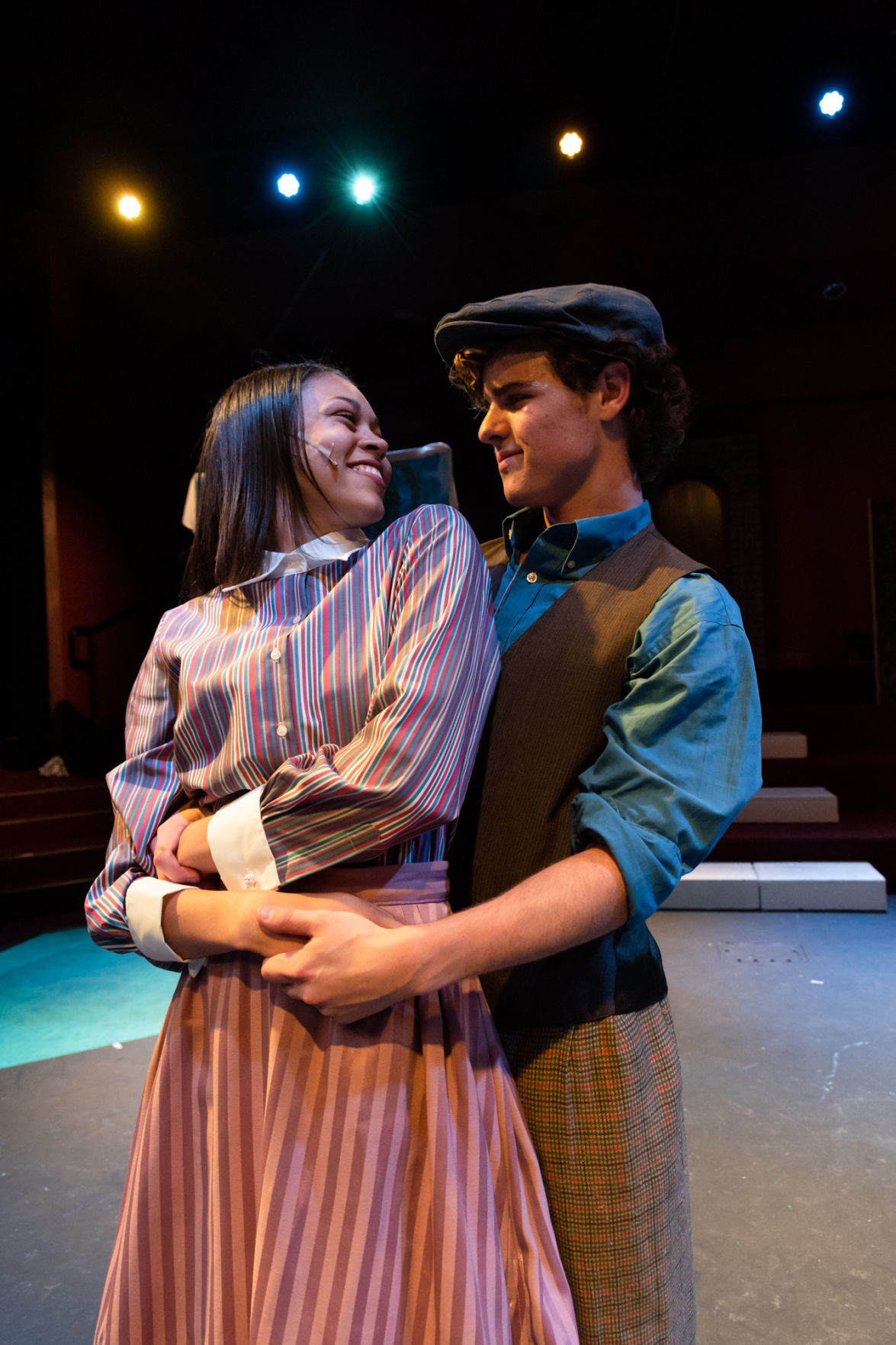 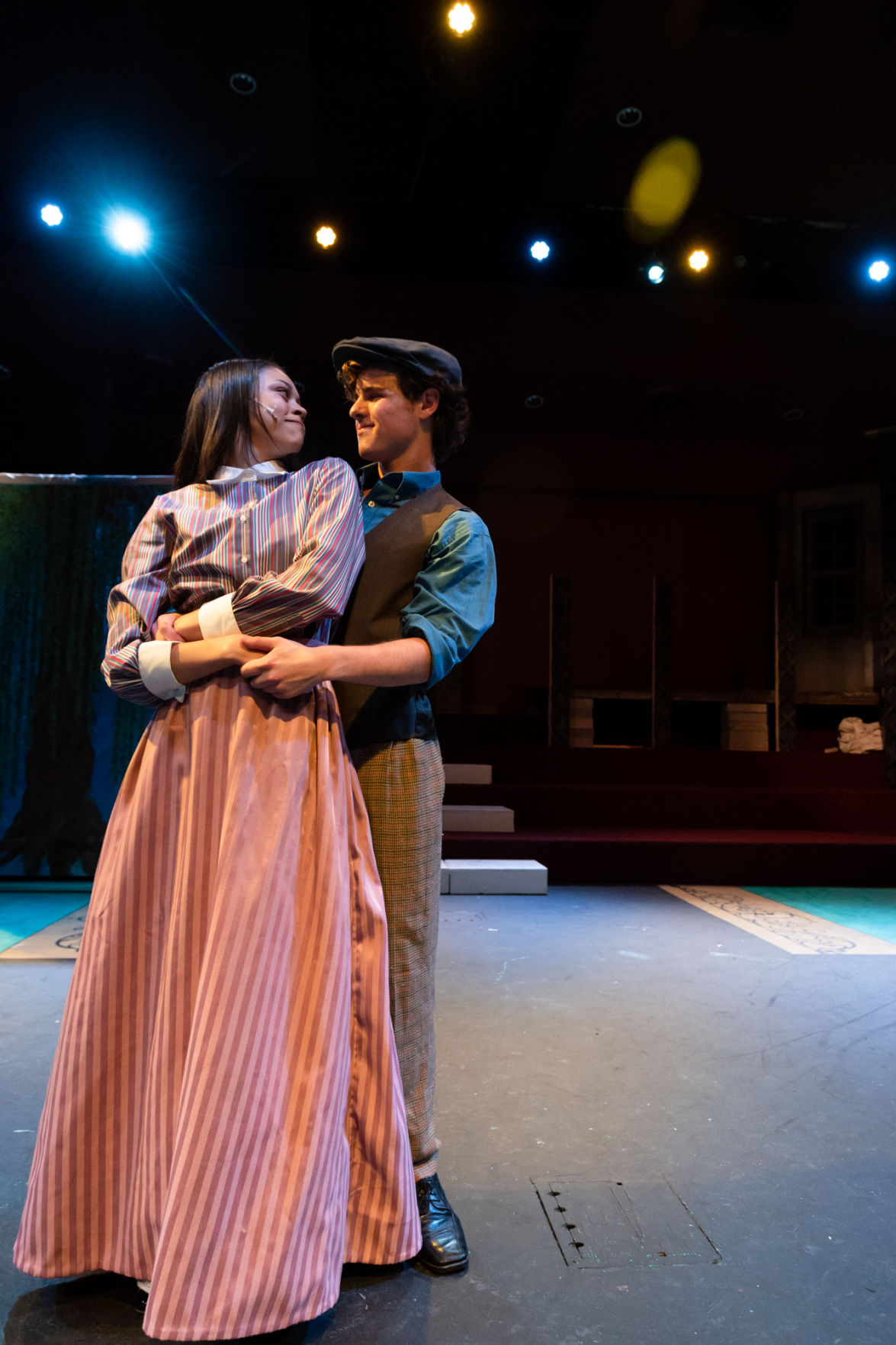 cara Campbell/staffCast members of Tyler Civic Theatre’s production of Disney’s “Newsies the Musical” perform “Seize the Day” during a dress rehearsal in Tyler. Below, Lizzy Tucker, portraying Katherine Plumber (left), and Collin Skelton, as Jack Kelly, perform a scene together.

Cast members of Tyler Civic Theatre's production of Disney's "Newsies the Musical" run through a number during a dress rehearsal in Tyler. (Cara Campbell/Tyler Morning Telegraph)

Stephen Rainwater says something wonderful happens when a group of young men sing together onstage: "It becomes a powerful moment."

Thankfully for Rainwater, "Newsies," the musical he is directing for Tyler Civic Theatre, is filled with many moments of teenagers and young men belting out anthems of defiance and solidarity.

"Newsies" is based on the 1899 strike of young and mostly disadvantaged news hawkers in New York City. The strike erupted after the powerful newspaper publishers of the day raised the price of the papers the kids were selling to people on the street.

Faced with the prospect of losing money and fed up that they were being taken advantage of, the newsies fought back.

In this version of the history, which began as a movie in 1992 before being adapted into a hit musical on Broadway, the newsies are mostly orphans whose only family consists of the other boys who live in their shabby boardinghouse.

Bolstered by a new sense of empowerment, the newsies realize they can succeed if they stick together.

Many of the more memorable scenes, "Seize the Day" and "Carrying the Banner," involve the newsies dancing and singing as a group onstage.

Rainwater, whose many Tyler Civic Theatre credits include acting in "Little Shop of Horrors" and directing "Footloose," said he knew "Newsies" would be a challenge.

He had to find lots of young actors/singers/dancers who could pull off the parts of the newsies.

"My strategy was to cast a wide net," Rainwater said.

He and the show's creative team members used social media and other ways to recruit new talent.

More than 100 people showed up for auditions, one of the largest responses ever to a Tyler Civic Theatre casting call.

"They blew me away," Rainwater said of the talented youths who showed up.

Eighteen-year-old Collin Skelton, a spring graduate of Bullard High School who is going to study theater at Tyler Junior College, was cast as Jack Kelly, the leader of the newsies.

"I was not expecting it," Skelton said of being selected to play the show's central character.

Skelton said his biggest challenge is transitioning from when Jack is rough and tough to the times in which he is more vulnerable.

He said his favorite scene is at the end of the first act when he sings "Santa Fe," a song of longing for a better life that is a high point of the musical.

"It is a time I have to myself onstage," he said.

His character falls in love with Katherine Plumber, a newspaper reporter who supports the newsies. Katherine, played by Lizzie Tucker, and Jack have a duet, "Something to Believe In," in the second act.

Bryan Knous, a 21-year-old student at the University of Texas at Tyler, plays Race, one of the newsies. His character is based on a real person.

Knous' big moment comes at the beginning of the second act when he's featured in "King of New York," a musical number that requires strong dancing skills.

"I was very scared at first," Knous said of learning choreography, "but I trusted her (choreographer Shelby Moy)."

Sarah England, the assistant director, said the cast quickly bonded and took on the challenges.

"From the first rehearsal they were taking care of each other," she said. "They just took it (the material) on and were determined to do it justice."

Added Rainwater, "We are very excited; the kids are ready."

A list of cast and crew members and information on purchasing tickets is available on the theater's website, tylercivictheatre.com.

The Marshall Tucker Band will headline a concert Saturday at the Oil Palace, Texas 64 in New Chapel Hill.

The Great Texas Balloon Race is more than a bunch of hot air.

Danny Mogle has covered news in East Texas for decades. He currently focuses on arts, entertainment and human interest stories and serves as the editor of Lifestyles Magazine.