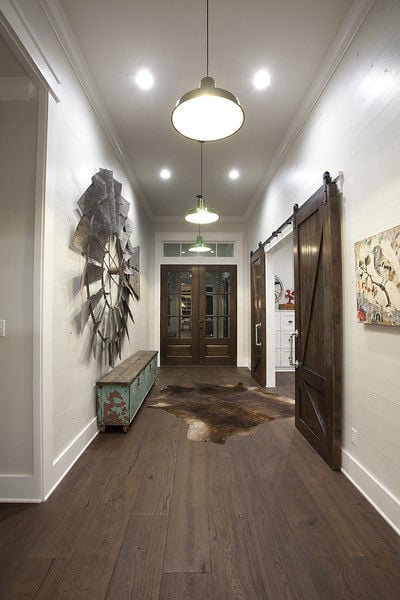 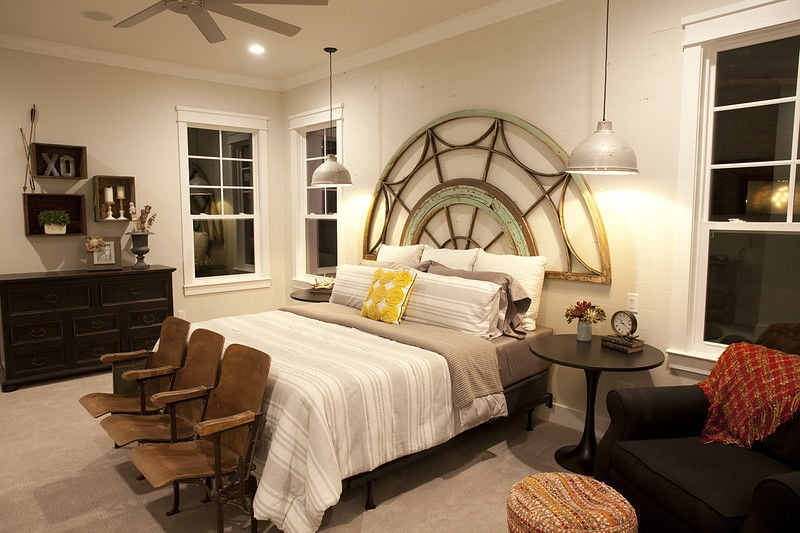 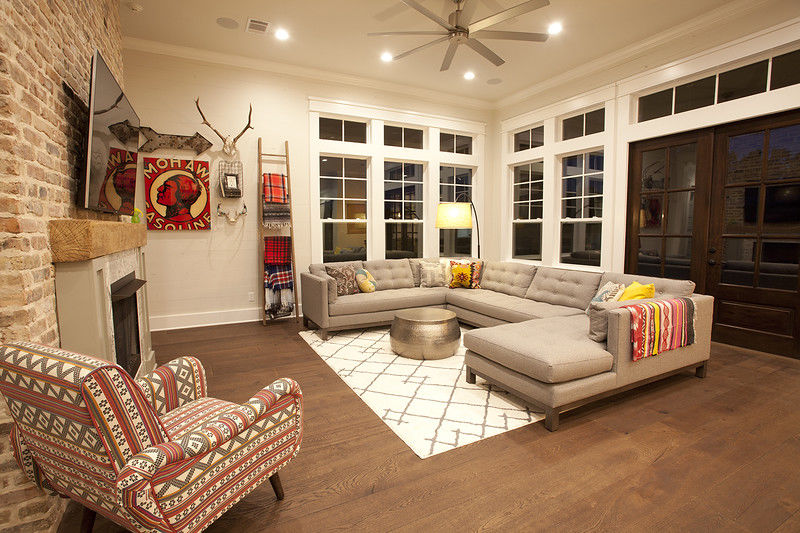 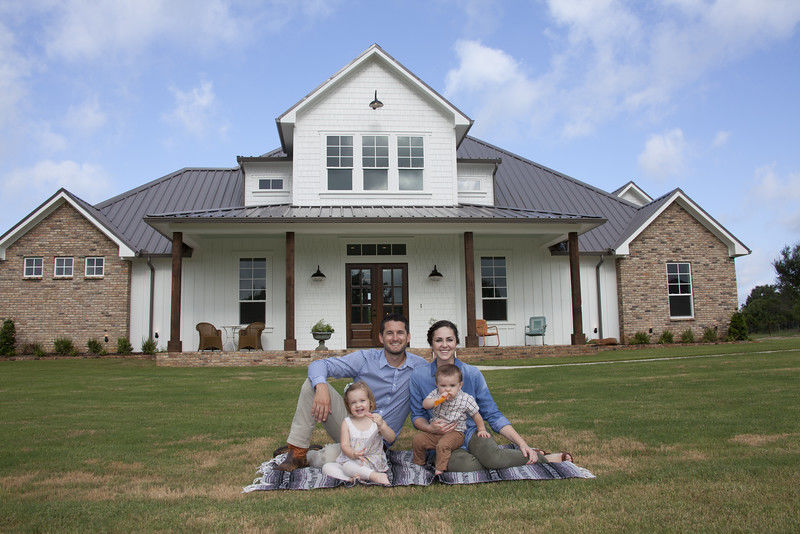 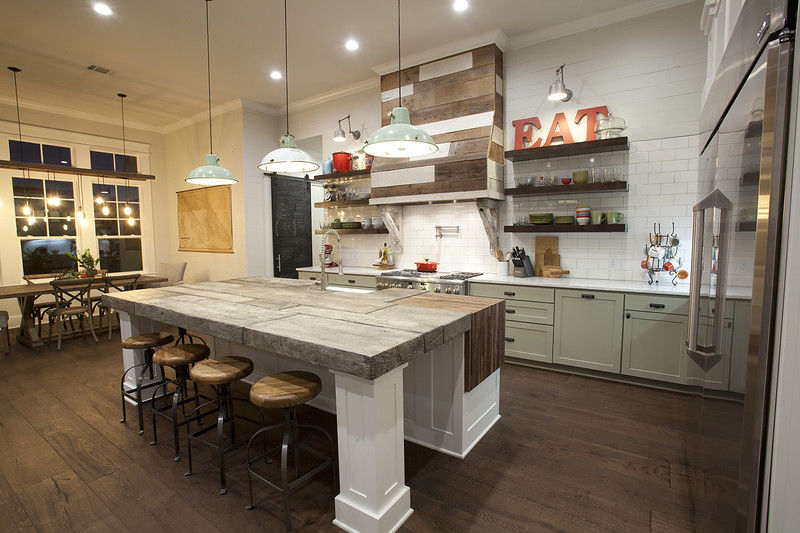 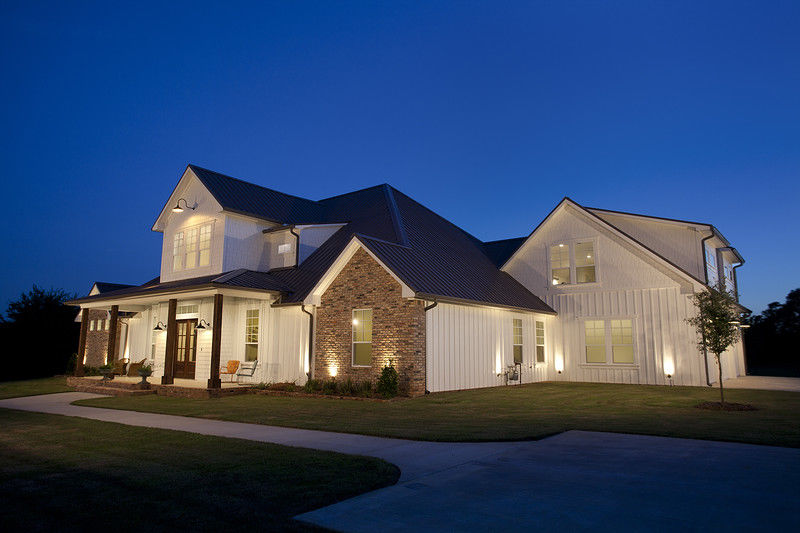 Brandon and Samantha Pahler are champions at injecting the “wow” factor into their Flint home. Let’s examine the evidence.

For starters, a pew of rustic wooden seats saved from an old church sits at the foot of their bed. The eye-catching hood of the kitchen stove is assembled from pieces of wood salvaged from a 100-year-old East Texas barn. And, just in case there is lingering doubt, the top of a metal windmill that once whirled in the breeze hangs on a wall in the foyer.

Drawn to objects from a bygone era, they fell in love with the windmill the moment they saw it at Canton First Monday Trade Days.

“We knew it had to go here (in the foyer) as a cool statement piece,” Brandon Pahler said.

Their love for blending the old with the new is showcased in both the home’s decor and their work as custom home builders.

“Obviously we love the farmhouse style and the craftsman style. We enjoy and are passionate about mixing all the charm and the one-of-a-kind elements of old homes into modern construction … and making it the best of both worlds,” he said.

Brandon grew up in California working for his father, a general contractor. “He taught me everything I know about building. He started me out at a really young age. I’m fortunate that he raised me that way,” he said.

As one of the first projects he tackled on his own, Brandon bought a 100-year-old house, stripped it to the studs and remodeled it. He later built a “dream home” for himself and Samantha.

And then Brandon got a crazy idea. After visiting East Texas, he became convinced its pine covered rolling hills and one of its close-knit small towns would be a great place to raise a family. Brandon and Samantha have two children: 3-year-old-daughter Peyton and a 1-year-old son Ransom.

“I didn’t know a single person (in East Texas),” Brandon said. “It was a leap of faith but we felt God was calling us.”

They moved to rural Smith County, opened Front Porch Homes and built their 3,800-square-foot home near the end of a small road.

The focus of the Pahlers’ modern take on a farmhouse is the combination kitchen, dining room and den.

“This is a really open concept that we like,” Bandon said, standing in the kitchen. “It’s an open and airy space great for entertaining and a growing family.”

The kitchen bar looks like it was pieced together using thick planks of textured wood. “It’s actually concrete,” Brandon explains. “Everybody asks about it. It’s obviously meant to appear like wood. It’s one piece and turned out amazing.”

The same technique was used to create the fireplace mantle.

Brandon pointed out the matching transoms he built above the windows and doorways. He says this craftsman-style architectural element is “a cool feature often found in older homes.”

Hidden behind a bookcase in a short hallway between the great room and master bedroom is a safe room built to withstand a tornado. The master bedroom suite, children’s bedrooms, the laundry room and mudroom, which has a row of red lockers that once were used in a school, also are on the first floor.

The great room opens onto an outdoor kitchen. A barn and a pasture, where longhorn cattle graze, are out back.

The railing on the stairway to the second floor is made of galvanized pipe. Another bedroom-bath combo, a play room with bunk beds and a small reading nook that Peyton has taken over as her secret closet are on the second floor.

Brandon is quick to give Samantha credit for the home’s eclectic interior design that makes the most of flea market finds and yesteryear treasures.

A collage of objects on a wall in the great room includes an old ladder, on which colorful blankets are draped across the rungs, a bold metallic sign advertising Mohawk Gasoline, two bleached hoof stock skulls with horns intact and a little basket filled with books.

Blankets and pillows add pops of color to the large sectional sofa facing the television mounted on the fireplace.

The base of the light fixture over the dining room table is an old wooden ladder they picked up at the Round Top Texas Antiques Fair.

“We often take a large trailer down (to Round Top) with us and we get as much as we can (in antiques) and bring them back and use them as we find places for them,” he said.

Samantha’s creativity and eye for the unusual is evident in the master bedroom. A weathered wooden frame of a stained-glass window is mounted on the wall behind the bed.

“That actually came out of our church, the church that Samantha and I grew up in,” he said. “It’s an older church and at one point they renovated it and this came out of it.” The pew of seats at the end of the bed came from the same church.

In the upstairs bedroom, Samantha strung burlap sacks together to create wall art.

“I think that what sets us apart and makes us different (from other builders) is our influences. We’re originally from California and so we have different design influences that we grew up with and were able to bring here,” he said.

Brandon said they had an “unbelievable response” when their home was featured in the Tyler Area Builders Association’s Parade of Homes a few years ago. “We had people telling us, ‘This is what I want my home to look like.’”