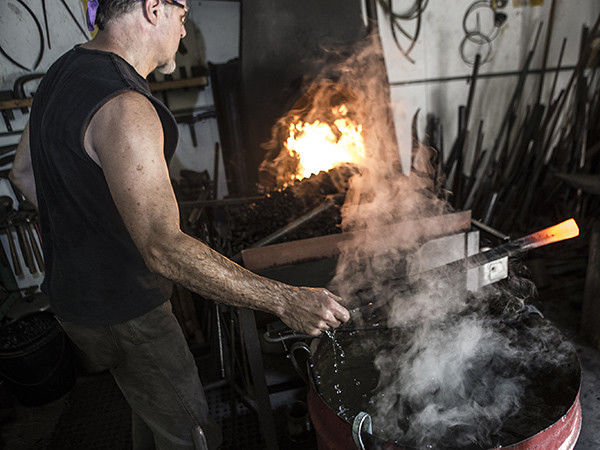 Chris Shea has a blacksmith shop in his Quonset-style shed in Prince George's County, Md. He said his pieces bridge traditional and modern design. (Photo by April Greer for The Washington Post) 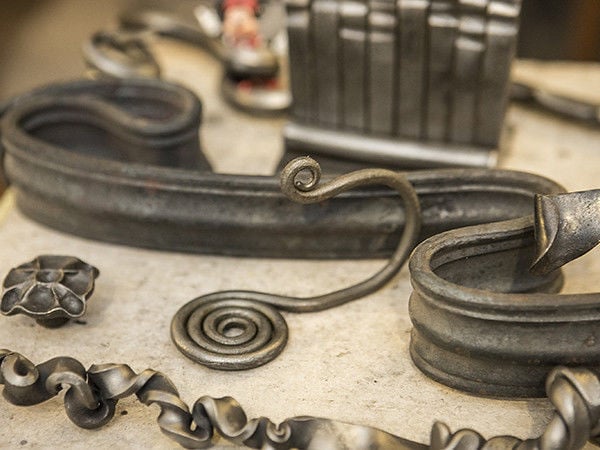 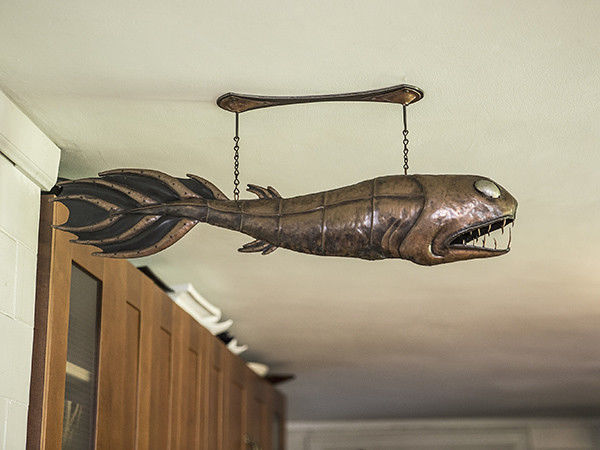 A fish weathervane by Chris Shea. (Photo by April Greer for The Washington Post)

Chris Shea has a blacksmith shop in his Quonset-style shed in Prince George's County, Md. He said his pieces bridge traditional and modern design. (Photo by April Greer for The Washington Post)

A fish weathervane by Chris Shea. (Photo by April Greer for The Washington Post)

The village smithy celebrated in Henry Wadsworth Longfellow's 1840 poem about blacksmiths glows again in Washington-area workshops lit by flaming forges. Blacksmithing is enjoying a revival as homeowners seek custom metal designs for items as varied as stair railings and side tables.

"People spend so much time in front of computer screens. They are eager for something handmade, the richness of form and detail of forged ironwork," says Brandywine, Maryland, metalsmith Chris Shea, whose furniture designs are included in the Renwick Gallery's permanent collection.

Old-fashioned, ornate ironwork is still produced, but streamlined metal designs are the newest craze. "Aluminum and stainless steel in particular are having a resurgence," says Washington, D.C., interior designer Susan Vallon, who commissioned Hyattsville, Maryland, blacksmith Jesse Robinson to blend the metals into a stair railing for the back deck of her Forest Hills home. "Forged metal will always have a role for the designer who wants to invite craftsmanship into spaces."

The revival of handcrafted metalwork is reflected in the increasing number of blacksmiths across the country. Since 1973, the Artist-Blacksmith's Association of North America has grown from 92 members to 4,087 today. "There are more women smiths now than ever before," says association administrator JoAnn Bentley. "It's an ancient trade that's been given new life," adds D.C. blacksmith John Dittmeier, who founded the Mid-Atlantic Smith Association, an affiliate of the organization.

Blacksmithing is distinguished from other types of metalworking in its forging of hot steel. Straight metal rods are heated to temperatures between 1,500 and 2,500 degrees Fahrenheit, then pounded with old and new instruments into curved and flowing shapes.

Higher temperatures soften the metal so it can be quickly sculpted. "When the metal gets hot and squishy, it can be stretched and worked like clay," says Robinson, the Hyattsvillle blacksmith. Traditional tools, including hammers, anvils and chisels, are still used to shape the heated metal, along with modern welders, plasma cutters and grinders.

This transformative, labor-intensive process is part of the attraction to the craft. "It's the artistry," says Robinson. "Most metalworkers order prefab parts and weld them together. A blacksmith takes a bare piece of steel and completely changes its shape."

Learning the craft typically requires an apprenticeship or specialized training. Locally, Dittmeier teaches Saturday courses at his Fontana Forge in Washington once a month during fall and spring. The Blacksmiths' Guild of the Potomac offers instruction and demonstrations at its forge in Arlington County's Gulf Branch Nature Center.

The detailed work of designing, forging, refining, assembling and finishing the metal components contributes to the objects' costs, which can range from $1,500 for a candelabra to $50,000 for stair railings. And homeowners willing to invest in a custom design from a blacksmith must wait patiently for the results. Shea's furniture and smaller objects can take eight to 12 weeks to complete, and his larger architectural projects typically require at least six months.

Yet the one-of-a-kind results, Shea says, "may be the only way to take full advantage of an unusual or problematic space." Commissioning a design from a smithy, he adds, offers "the chance to be involved in the creation of something special, a unique object created for a very specific setting."

Glittering bits of silver metal litter the concrete floor of the Hyattsville metal workshop run by Jesse Robinson. The shiny residue is from the cutting and grinding of aluminum pieces into frames for balcony partitions at the Watergate condominium.

Robinson, 32, has come to specialize in such architectural components after apprenticing to blacksmiths in his native Illinois and Bealeton, Virgnia. He opened his own shop in 2012 and now works with two apprentices. His combination of technical know-how and artistry has led to designs for fences, stair railings and signposts.

Scattered around his studio are the machines used to create the custom pieces. They include the power hammer for smashing hot steel into bookends - "when it gets going, the floor shakes," notes Robinson - and the hand-built forge for heating metal so it can be bent into a decorative flourish.

"Most people don't understand how hard and intricate the process is," says the blacksmith. "They are used to buying metal products off the shelf that are mass-produced."

Robinson has recently shifted his designs from organic to machinelike shapes, as evident in the metal-sided staircase to a loft that he designed for a short-term rental apartment in LeDroit Park.

"The ladder is an eye-catching centerpiece to the room," says property owner Ethan Arnheim, who commissioned Robinson. "More than 50 Airbnbers later, it is no different than when it was carefully installed."

When he turned 30, Chris Shea traded in his educational programming job at the Shakespeare Theatre Company for blacksmithing courses at a craft school. Now 51, Shea forges metal furniture and architectural details in a Quonset-style shed behind his house in Brandywine, in Prince George's County, Maryland.

His pieces stand out for their quirky details inspired by the natural world. A stair railing for a house in Potomac, Maryland, flares into a curving end reminiscent of a leaf or a bat wing. A side table awaiting a glass top is supported on legs resembling an insect's segmented limbs. A door knocker for a Rockville, Maryland, apartment recalls a horseshoe crab. "The challenge is to bring as much sculptural power to the pieces as I can and still meet the function," says Shea.

The blacksmith says his work bridges traditional and modern designs - "I ignore trends" - and some of his larger pieces reflect a dramatic flair, inspired by his theater background. A tall coat rack made of steel, copper and bronze for Reston, Virginia, homeowner Jacqueline Urow sets a mirror and hooks within a porthole-like design recalling Captain Nemo's submarine; the wall piece extends upward to whiplash curves and a lyre-shaped top.

"Friends have remarked that it looks like a sea creature," says Urow, who serves as president of the James Renwick Alliance. "What I appreciate about Chris' work is the way that it melds hard materials and soft curves to form something sensuous and organic."

Homeowners Keith and Marianne Powell, who live in a 1905 townhouse on Embassy Row, hired Shea to design a grille for their front door. "We wanted something that was art as much as it was functional," says Keith Powell, a ship broker. "Chris gave us both. Not only does his design complement the architecture, but the grille is hinged, so we can open it up and clean the glass in the door."

The former boiler and coal rooms of a brick warehouse in Washington are home to Fontana Forge, where blacksmith John Dittmeier toils at his craft. Displayed along one wall are the hooks, pot racks, fireplace tools and decorative crosses created in the studio.

Dittmeier enjoys reusing steel parts to forge new furniture designs - "pieces for small apartments that are two levels above Ikea," he says. The smith shows off a side table made from a pizza pan mounted on three legs tipped with wooden eggs. He points to a cultivator disc near the entrance to his shop that will one day become a tabletop.

Crowded into the small workshop are the tools essential for blacksmithing. An anvil sits in the center of the space near a grooved swage block for shaping metal and a power hammer for pounding it. A steel drum filled with water serves as a trough for cooling the hot metal once transferred from the forge.

Dittmeier, 65, who has a degree in civil engineering, returned to blacksmithing in 2014 after a 20-year career working on transportation projects such as the Washington, D.C., subway's Silver Line. His current trade, he says, "combines my life experiences in hand work, wrestling and engineering. It engages my mind and body, my heart and soul."

While in his 20s, Dittmeier apprenticed to blacksmiths in Delaware and England, and spent six weeks in Paris researching the modern French ornament that still inspires him today. The influence can be seen in a pair of gracefully curved table legs hanging on a wall of his workshop.

The blacksmith is now introducing a younger generation to the craft in classes held once a month in his studio. "I was part of the 1970s revival of blacksmithing and now work to ensure it continues deep into the 21st century," Dittmeier says. "We do not wish to have what was gained to be lost again."