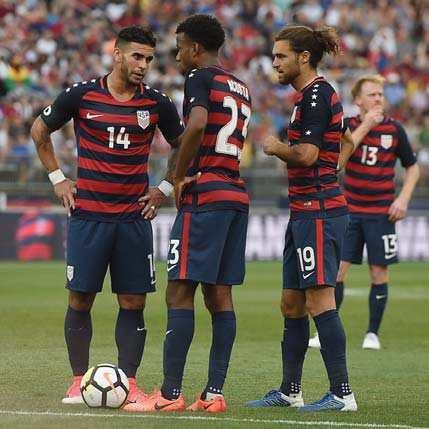 DOM DWYER (left) talks with teammates Kellyn Acosta and Graham Zusi during a recent match against Ghana. The U.S. is again returning to a relatively inexperienced lineup for the Gold Cup — which didn't work out so well 8 years ago.

DOM DWYER (left) talks with teammates Kellyn Acosta and Graham Zusi during a recent match against Ghana. The U.S. is again returning to a relatively inexperienced lineup for the Gold Cup — which didn't work out so well 8 years ago.

The United States is employing its "B" team for this year's CONCACAF Gold Cup.

Before we go any further, let's get this straight: there is no such thing as a "B" team.

Not when national pride is on the line. The USA learned that lesson the hard way eight years ago.

In 2009, our country was still buzzing after a breakthrough performance in the Confederations Cup. The USA had reached the final and led soccer titan Brazil 2-0 at halftime before capitulating to their might in the second half and eventually fall 3-2.

But it was still a runner-up finish in a national competition. To get to the final, the USA had shocked European champion Spain in the semifinals.

That moment in U.S. soccer history took place at the end of June.

The U.S. earned its spot in that Confederations Cup by defeating Mexico two years earlier in the Gold Cup, 2-1.

The Gold Cup was set to be held again in the USA in July of 2009. It was the second major international competition in two months, so USA coach Bob Bradley opted to give the "A" team the month off.

No one could begrudge that decision. After all, the USA had just nearly beaten Brazil. Maybe it was time to give some younger, untested players their shot on the big stage?

You can be forgiven if many of those names don't ring a bell in your memory banks. Holden is known more now for his broadcasting on FS1 then for his injury-riddled career.

As for the others, they were not household names to anyone except die hard U.S. soccer fans. There was no Landon Donovan, Clint Dempsey, Carlos Bocanegra or Tim Howard on the 2009 Gold Cup team. All of those guys had just led the USA against Brazil, but were allowed to return to their club teams and/or start their vacation.

So a group of untested and unproven U.S. players was going to represent the colors in this Gold Cup. I remember at the time being so elated with their USA's showing at the Confederations Cup, I agreed with the decision.

The Gold Cup was being played all over the U S of A with the Gold Cup Final at the New Meadowlands Stadium in East Rutherford, New Jersey.

Even with the "B" team, I figured the USA had this under control.

U.S. soccer was soaring and although Mexico was bringing its "A" team, El Tri was trotting out some young dude at forward named Giovani dos Santos, who was currently playing for Ipswich Town on loan from Tottenham Hotspur in England.

I wasn't worried. And that was if Mexico even made it to the final, which could be the only chance for the two rivals to meet.

The young U.S. team took care of business, cruising through group play and taking out Panama (2-1) in the quarterfinals and Honduras (2-0) in the semifinals. Mexico did its part too, winning its group, getting past Costa Rica in the semifinals on penalty kicks.

So the great rivals would meet again and a chance for the USA to make it 12 for 12 against Mexico on home soil.

And even if Mexico won, which was a big "if," it was against our "B" team anyway.

That was little comfort to me as I watched the USA get humiliated 5-0 in front of a capacity crowd of 79,156 — many of which were wearing green, white and red.

A first half penalty for Mexico early in the second half was the first of five goals scored by El Tri, which reveled with each one in front of their cheering fans.

I did not care that the USA's "B" team had been the victim of this.

Dos Santos scored a goal and set up several others.

Bradley tried to make sense of the loss and put a good spin on the overall tournament.

"Look at anybody in the United States and this loss has to anger you," U.S. forward Brian Ching said to The New York Times afterward.

The loss also set in motion a flip in the rivalry, which was further illustrated two years later in another Gold Cup Final between the USA and Mexico. This one could have been played in Mexico City — for all the "home field" that was provided the USA in front of nearly an entire pro-Mexican crowd at the Rose Bowl in Pasadena, Calif.

The USA was using it's "A" team for this tournament.

The Red, White and Blue took a 2-0 lead and crowd was forced to sit on their hands.

I remember I was covering an East Texas Pump Jacks baseball game in Kilgore with earbuds in, listening to the broadcast on internet radio while trying to contain my excitement after Michael Bradley and Landon Donovan made it 2-0 just 25 minutes into the match!

Yeah, it did not last long. Thanks to 2009, Mexico no longer feared the USA on its home soil.

The final one was on a chip by Dos Santos, which is still shown today in highlight reels.

The USA got a measure of revenge by winning the Gold Cup in 2013, but did it in the Final against Panama, which upset Mexico in their semifinal.

America did not even reach the Gold Cup Final in 2015 with Mexico defeating Jamaica.

So it is 2017 — eight years after the 5-0 debacle. Yes, the USA is employing another "B" team and Mexico might also field a weakened side after it was in the Confederations Cup a month ago.

But history will only show the final score.

Regardless of who is out there wearing red, white and blue, it's time to reclaim this country's dominance on its home soil.