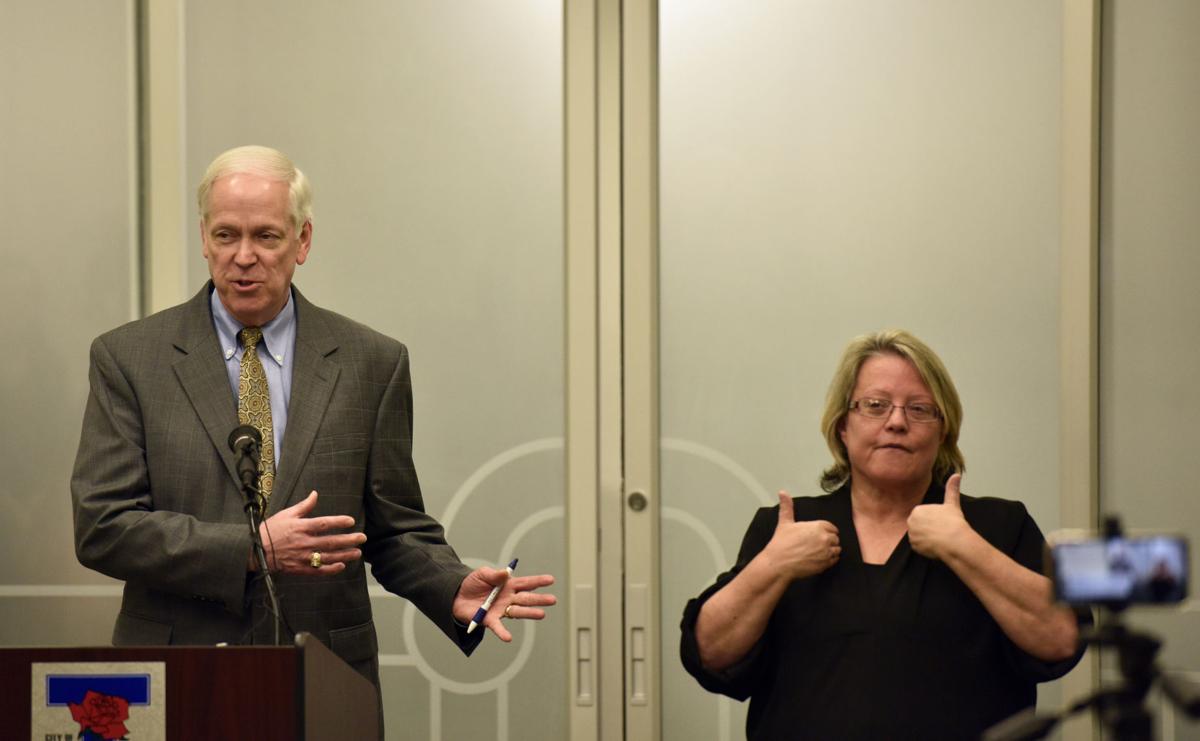 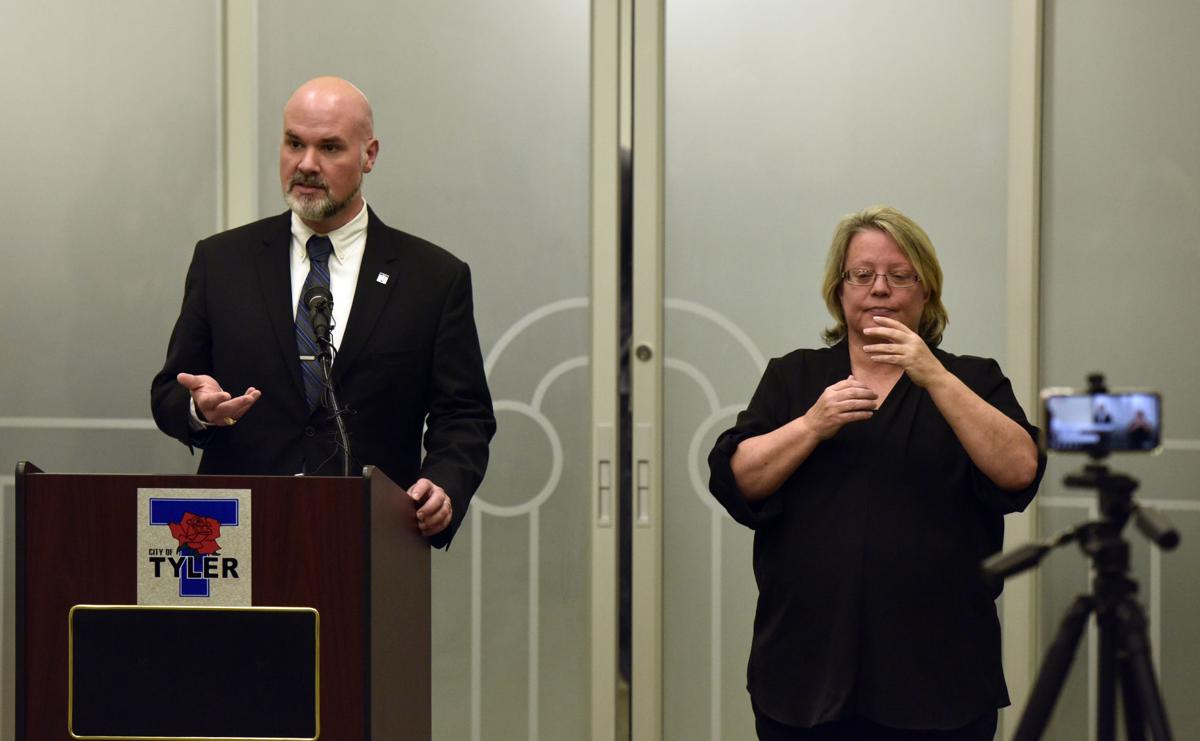 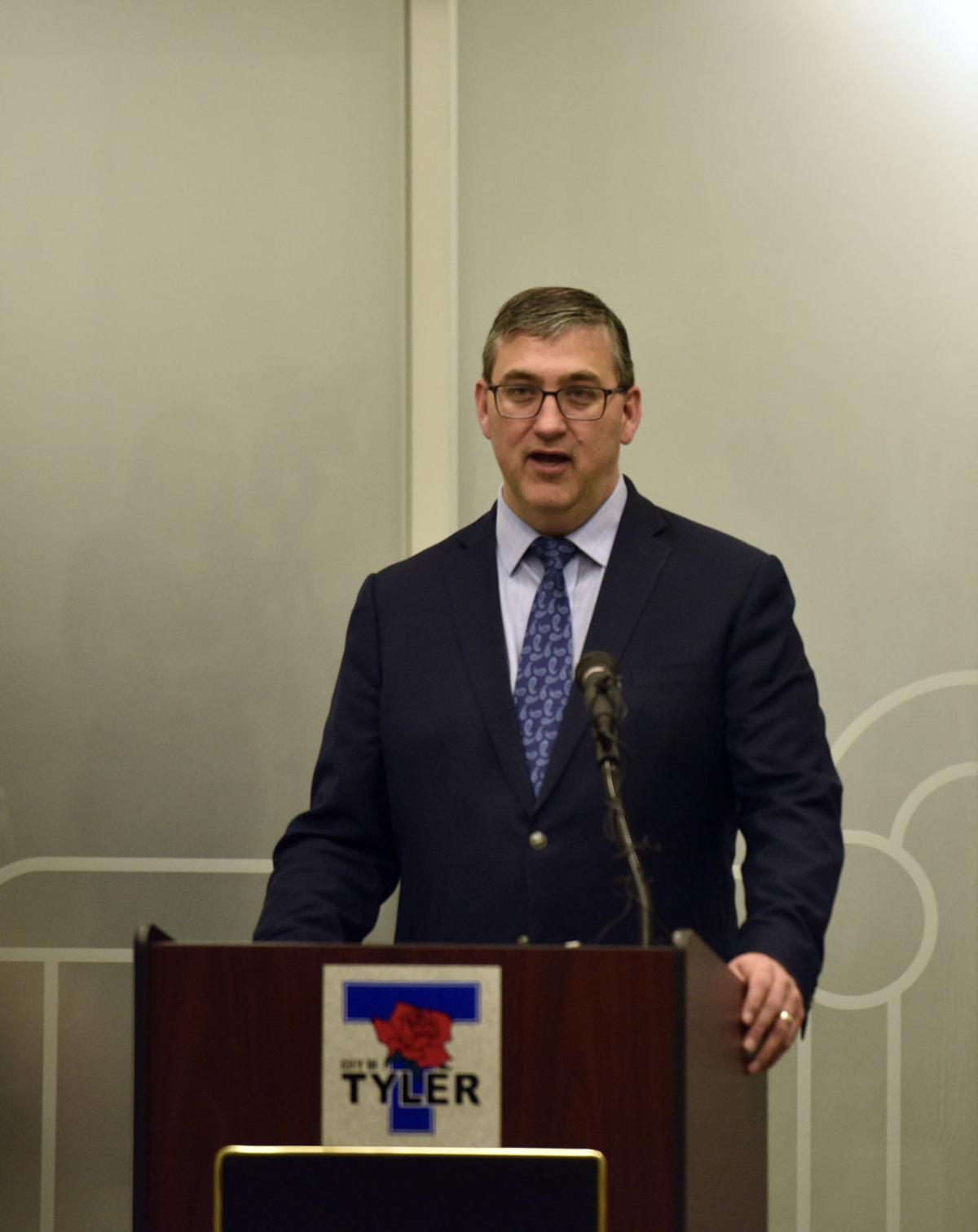 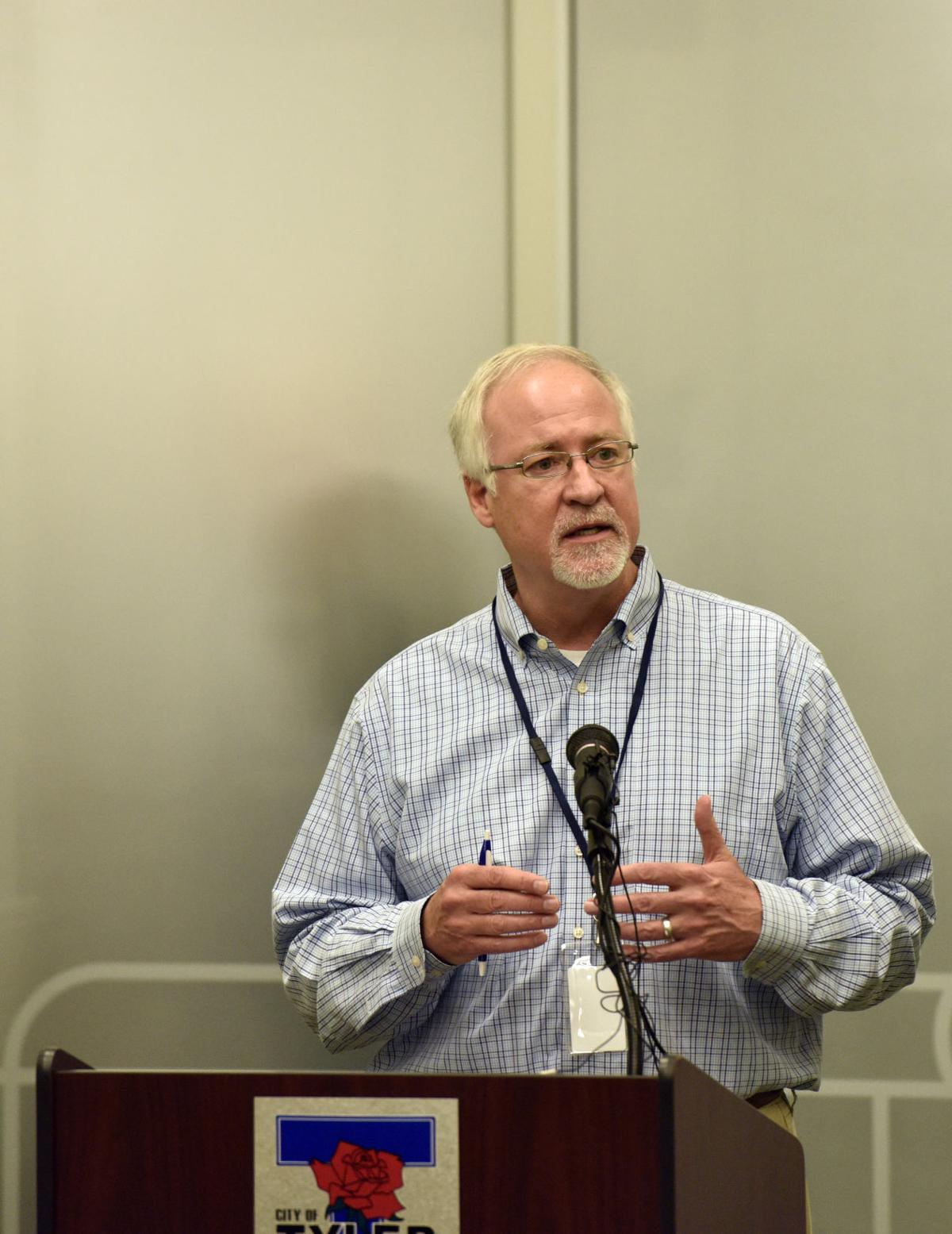 Tyler Mayor Martin Heines urges citizens to stay home and asks businesses to do their part in helping stop the spread of coronavirus during a press conference at Tyler City Hall on Wednesday, March 25, 2020. 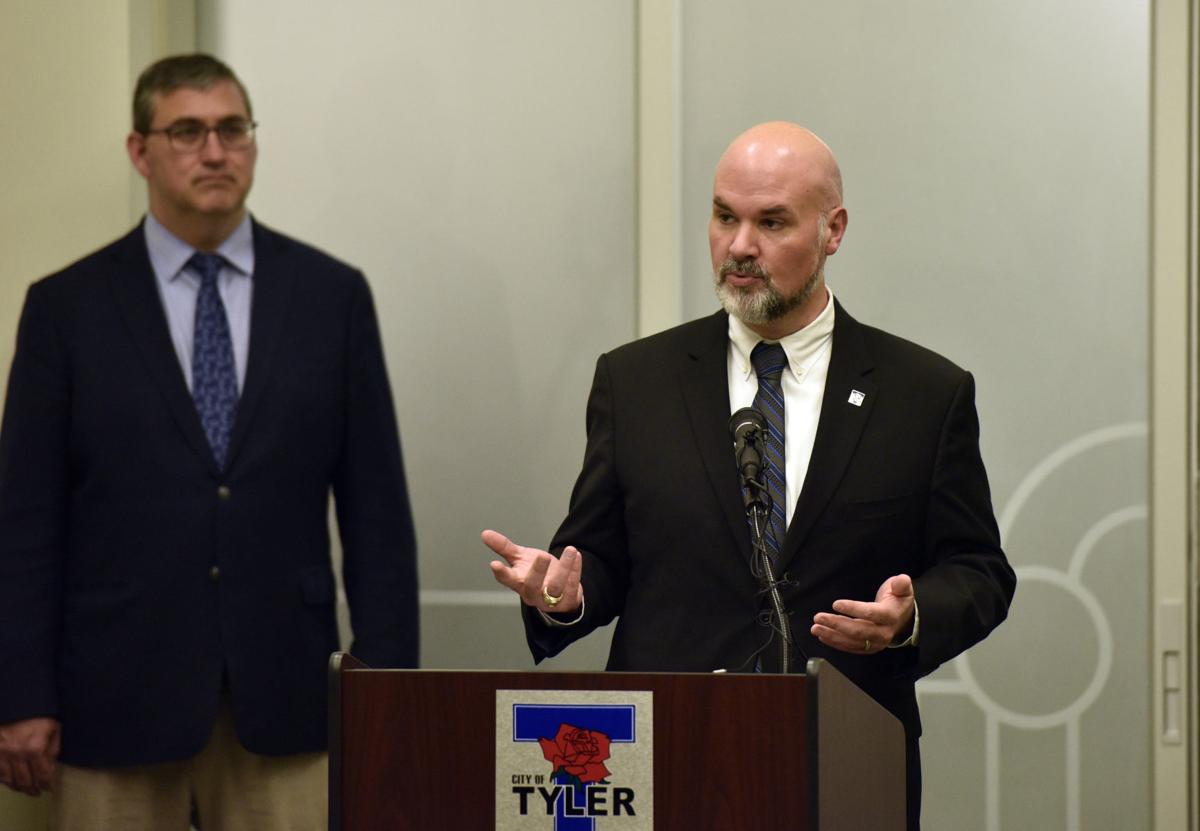 Tyler City Manager Ed Broussard discusses lengths the city is going to in order to urge businesses to help stop the spread of coronavirus during a press conference at Tyler City Hall on Wednesday, March 25, 2020. 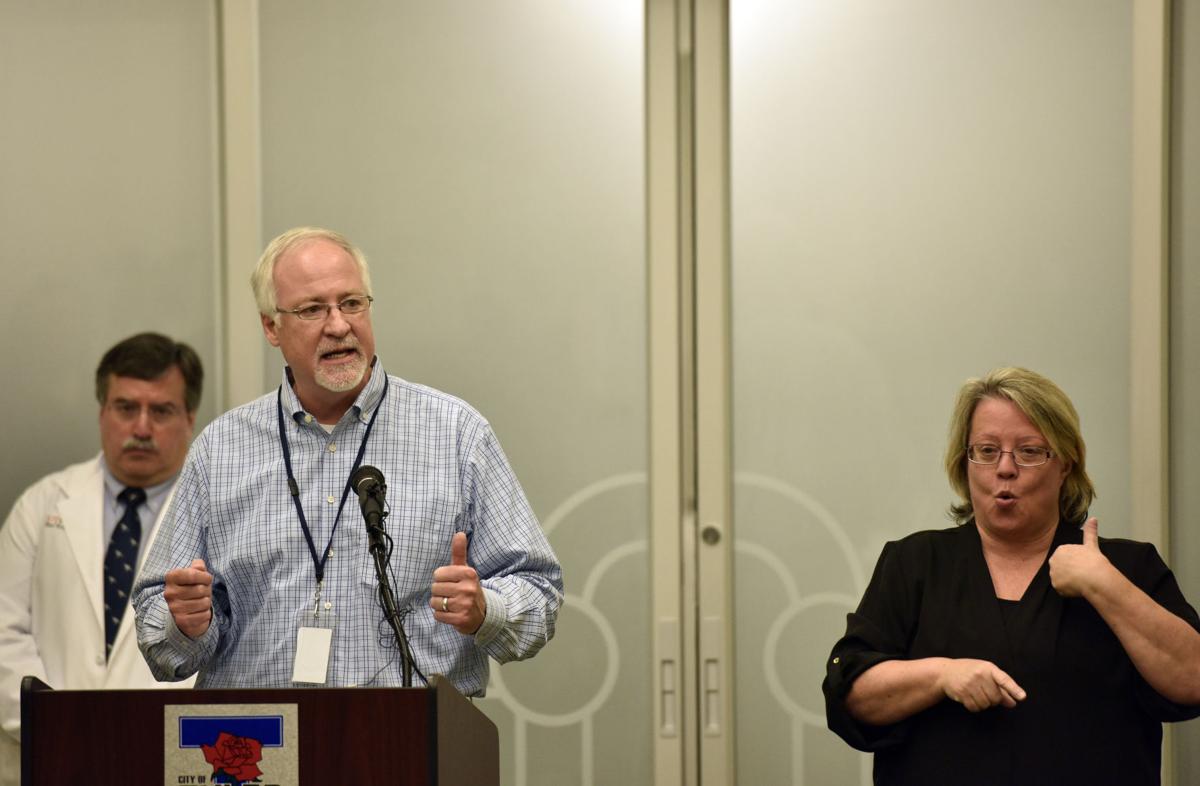 Tyler Mayor Martin Heines urges residents and businesses to do their part to help stop the spread of the coronavirus during a press conference at Tyler City Hall on Wednesday.

Tyler Mayor Martin Heines urges citizens to stay home and asks businesses to do their part in helping stop the spread of coronavirus during a press conference at Tyler City Hall on Wednesday, March 25, 2020.

Tyler City Manager Ed Broussard discusses lengths the city is going to in order to urge businesses to help stop the spread of coronavirus during a press conference at Tyler City Hall on Wednesday, March 25, 2020.

Tyler Mayor Martin Heines urges residents and businesses to do their part to help stop the spread of the coronavirus during a press conference at Tyler City Hall on Wednesday.

A 91-year-old man was confirmed as the first coronavirus death in Smith County Wednesday by the Northeast Texas Public Health District.

NET Health CEO George Roberts confirmed the death and updated the total of confirmed positive cases of COVID-19 in Smith County to 21.

It was initially believed that there were 16 cases when a press conference was held at noon, but five more cases were announced just after 8 p.m.

“At this time, I am issuing a ‘stay-at-home’ request,” Heines said. “If you don’t have to leave your home, then don’t.”

Roberts said the man who died Tuesday night or early Wednesday morning is the first COVID-19 related death in the East Texas region. Roberts said he believes the death occurred while the man was in the hospital.

Roberts said 13 of the Smith County cases are in the city of Tyler, but he would not give further details on those in the smaller towns.

“I can tell you 13 of the cases are in the city of Tyler; however, I’m not going to go further than that because again in the smaller communities it’s easier to identify,” he said. “It’s my job to keep people’s privacy.”

Roberts speculated that the rise in cases could be attributed to traveling and Tyler being an urbanized area for East Texas.

“We’re kind of a major hub between Dallas and Shreveport. People travel. Our first three cases were travel related,” Roberts said. “Our area’s considered rural, but we’re really more of an urban center.”

Heines and Moran said officials are using contact tracing 24/7 to combat the spread of the virus.

When asked for more details on areas patients had been in or what cities in Smith County they resided in, Heines pushed back at the need to offer more specific details.

Beginning last week, Moran said he’s been holding telecommunication conferences with the mayors of the smaller cities and he’s in constant communication with them.

The Smith County Sheriff’s Office, Tyler Police Department and NET Health are jointly doing contact tracing immediately when there is information that can be acted on, Moran said.

“We’re doing the best we can. What we would go ask for is cooperation on the back side from anybody that has been tested to make sure that they give us full information once they’ve tested positive,” Moran said. “To let us trace down their steps as much as possible.”

Regarding retailers, Tyler City Manager Ed Broussard said the city is working to educate the store officials on social distancing and lessening the amount of people in a room.

Broussard said that for example Home Depot has made great efforts to ensure the safety of staff and shoppers. He said Home Depot could fit about 1,000 people, but at this time they’re only allowing 100 inside.

“That is a good example for our larger big box retailers on how to control that,” Broussard said.

He said the police department is visiting store managers to suggest how to have less people in the buildings.

“Our retailers are doing everything they can,” Broussard said. “If you don’t need to be there, don’t be there. Making sure we do our social distancing because if you’re not you will contract this disease and you will spread it to other people.”

This is an opportunity for retailers to help fix this problem before stricter orders could be needed, Broussard added.

City officials said workplaces are asked to implement social distancing measures that include distancing employees and patrons by six feet and allowing for telework when possible. They also noted that all businesses are required to follow recent executive orders issued by the governor, and local law enforcement has the ability to enforce those measures.

Those who experience fever, cough and shortness of breath should contact their medical provider or a local hospital before coming to a medical facility, Roberts said. Officials stressed the need to call ahead to ensure medical personnel have time to set up safe accommodations.

Around the country, Roberts said he’s hearing that the positive case numbers run from 5 to 10% out of total tested.

“Just because you think you need a test, doesn’t mean you necessarily get tested,” Roberts said. “First of all our provider needs to determine that. Once the provider does that, there is a step by step process that is outlined by the CDC and the State Department of Health Services. We must follow that process when dealing with the public health lab.”

Just in the last three weeks, the public health lab has been testing samples for COVID-19. Before that all the tests went directly to the CDC, he added.

Roberts also noted the importance of exercising social distancing as respiratory droplets can travel up to six feet.

“If you are sick right now, please, please stay at home. Do not get and potentially infect your peers in the community,” he said.

During the news conference, Heines implored community members stay in their homes and exercise social distancing as much as possible.

Heines asked the public to use great common sense and courtesy when going out into the public areas, such as parks and playgrounds.

Those receiving the COVID-19 test or people who believe they have the disease should stay at home and isolate, Heines said.

A mandatory decision to shelter in place would be a collective decision amongst NET Health and county and city officials, Roberts said.

This presentation, led by Dr. Kara Jacobs Slifka, describes action that nursing homes and assisted living facilities can take to protect residents and staff from COVID-19.

ASL Video Series: COVID-19 Do Your Part to Slow the Spread

ASL Video Series: COVID-19 Do Your Part to Slow the Spread

COVID-19 Around the World