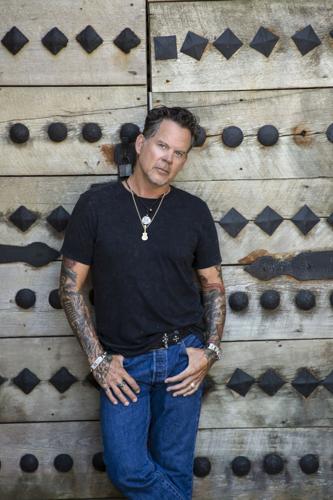 Country music artist Gary Allan will headline the Troubador Festival in Tyler on Sept. 10. Allen has earned four No. 1 singles, three No. 1 albums and 11 Top 10 hits during his music career. 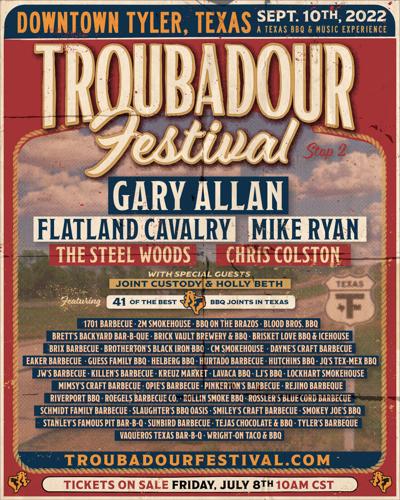 Country music artist Gary Allan will headline the Troubador Festival in Tyler on Sept. 10. Allen has earned four No. 1 singles, three No. 1 albums and 11 Top 10 hits during his music career.

The lineup of musical acts and barbecue restaurants has been announced for Troubadour Festival, which takes place on Saturday, Sept. 10, at the downtown Tyler square.

A Troubadour VIP ticket or Troubadour BBQ & Music ticket will allow the ticket-holder to sample food from as many of the participating restaurants as they like. Almost half of the participating restaurants were recently listed among Texas Monthly’s Top 50 BBQ Joints in Texas last October, with many others featured in the magazine’s Honorable Mention list.

“Bringing Troubadour Festival to Tyler has been a vision and a dream that is finally coming true in September. To say we are excited and honored is an understatement,” said Chase Colston, the festival’s promoter and co-owner who created Red Dirt BBQ & Music Festival in Tyler with Townsquare Media in 2014. “Tyler is our hometown, and I spent many years putting on barbecue and music festivals on The Square. Being able to do so again, and doing it with the Troubadour Festival brand, is something we’re excited to do for years to come.”

VIP tickets include hour-earlier entry (12:00 PM) into the barbecue sampling, a festival T-shirt, two alcoholic beverages, an exclusive VIP area with a private bar, seating, access to flushable toilets, and access to a standing-room only area in front of the stage. A Platinum VIP package also will be available. BBQ & Music tickets (1 p.m. entry) include both the access to the food sampling and the concert. Music tickets (4 p.m. entry) are good for the concert.

Local food trucks will be open on-site after the barbecue sampling ends at 4 p.m., and barbecue restaurants have the option to sell food after 4 p.m. if they wish.

The festival will have a tickets presale exclusively for email subscribers at 10 a.m. Thursday, July 7. Those wanting to subscribe to Troubadour Festival’s emails can do so at troubadourfestival.com. Subscribers will receive a presale code/link on July 7 to get early access to buy tickets before Friday’s public on-sale.

Gary Allan’s resume speaks for itself. A favorite among East Texans, Allan has been a fixture in country music for more than two decades. With four No. 1 singles, three No. 1 albums – all certified Platinum – and 11 top 10 hits, Allan will bring a show unlike any other in downtown Tyler. His latest album, Ruthless, marked his ninth career record to reach the top 10 on the Billboard Country Albums chart. Some of Allan’s hits include “Every Storm (Runs Out of Rain),” “Watching Airplanes,” “Nothing On But the Radio,” and “Right Where I Need to Be.”

Flatland Cavalry is one of the fastest-rising country bands over the last few years, trailblazing the country with their unique sound and lively shows. Their last two albums, Welcome to Countryland and Homeland Insecurity, were well-received among critics and their crowds have been growing exponentially. Led by frontman Cleto Cordero, the band recently sold out Billy Bob’s Texas in Fort Worth, opened for country superstar Luke Combs, and co-headlined Troubadour Festival in Georgetown in June of 2022.

Mike Ryan is a Texas native who has been a hot name on the scene for the last decade. Known for hits such as “Damn Good Goodbye,” “New Hometown,” “Other Side of the Radio,” and “The Rewrite,” Ryan brings honest songwriting and a lively performance to each show.

The Steel Woods are a country/Southern rock four-piece with a growing reputation as one of the best live-performing bands in the scene. The Steel Woods have opened for acts including Lynyrd Skynyrd, Miranda Lambert, Cody Johnson, Cody Jinks, and many more. Their hits “Let the Rain Come Down,” “Straw in the Wind,” and “Axe” have been streamed more than 30 million times on Spotify.

Chris Colston is an East Texas native who graduated from Lindale. A favorite in the area, Colston has been sweeping through the Texas music scene since releasing his debut album Bombs Away in 2020. Some of his hits include “Gone,” “Five Beers,” “First Dirt Road,” and his latest single, “Livin’ Like This.” His second full-length album, Boy Like Me, will be released on July 29.

More information on tickets, the lineup, directions, FAQs, and other festival information can be found at https://troubadourfestival.com. Sponsorships and retail vendor spaces are also available. Inquiries can be sent to sponsors@trouabdourfestival.com.

Chris Colston, 26, will be hitting the stage in his hometown of Tyler this Friday for the Texas Troubadour Festival Tour, part of a lineup rev…

A new music festival is coming to downtown Tyler in September.