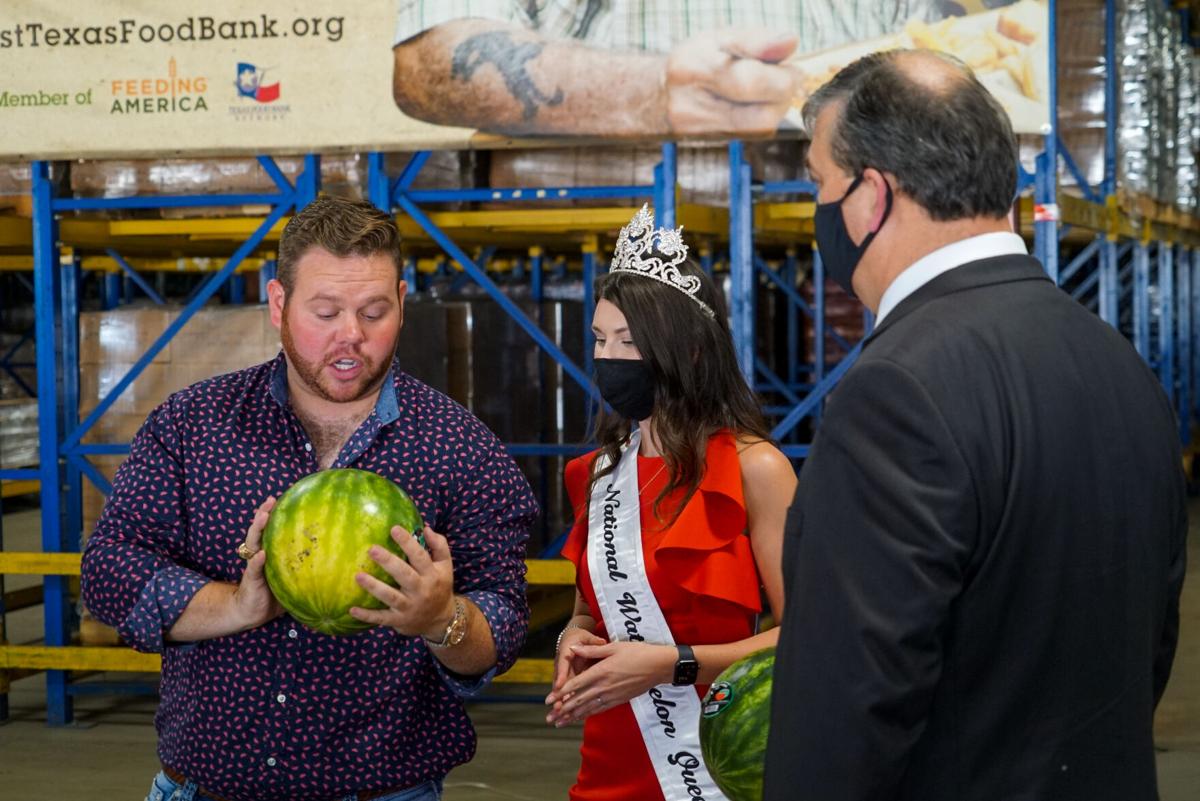 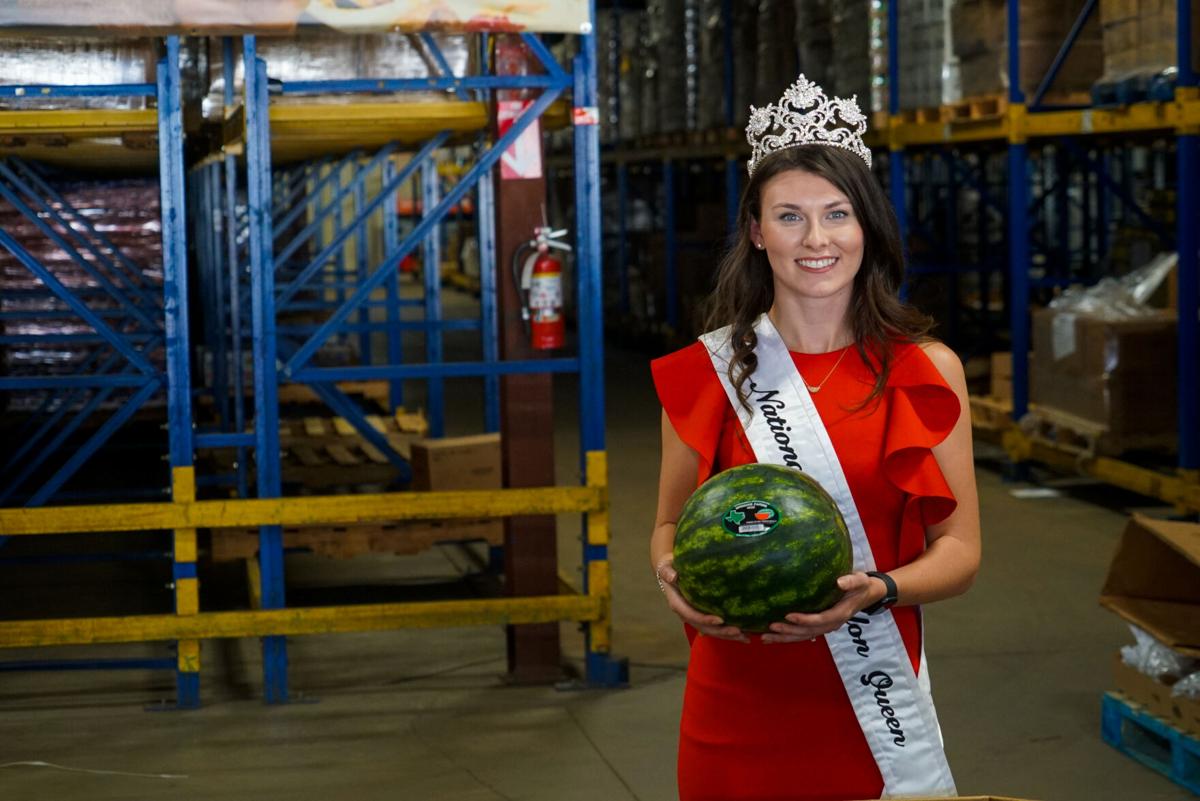 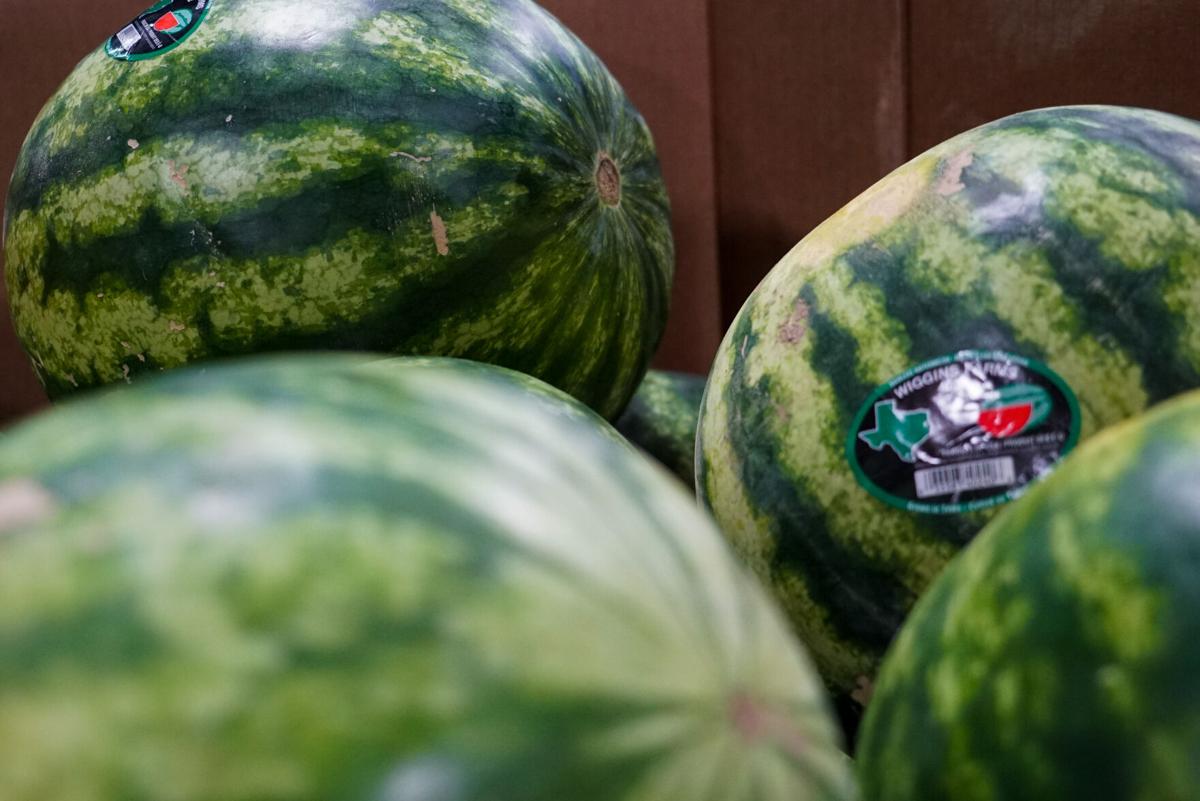 Royalty came to the East Texas Food Bank on Tuesday to celebrate the watermelon industry and the generosity of an area farm donating fresh produce to help those in need.

Wiggins Farms, based in Center, donated about 100 watermelons to the food bank to raise awareness about September being Hunger Action Month and in honor of National Watermelon Queen Paige Huntington, of Tyler.

Huntington was crowned in February in Orlando, Florida. As queen, she represents the watermelon industry on a national level.

“This is the biggest honor that I’ve ever had,” she said.

Wiggins Farms began in 1999 and has grown to include watermelon fields in Rio Grande Valley, Dilley and Center. The farms distribute 40 million pounds of watermelons to grocery stores around the United States and Canada. Kerry Wiggins runs the farm with her husband, Darren, their two sons, Jesse and Jared, and her daughter-in-law Ashlyn.

Ashlyn Wiggins, marketing director for Wiggins Farms, said the donation was made to celebrate the national watermelon queen being from Tyler and Hunger Action Month.

“We feel very blessed to give back during this pandemic, and kind of what it stands for is to give when we can,” Wiggins said. “We just want people to be aware of Hunger Action Month and do what you can. If you feel led to give, give.”

East Texas Food Bank CEO Dennis Cullinane said it’s an honor to welcome the national watermelon queen and to celebrate one of the most popular produce items the food bank receives.

“I think it’s maybe in the top three with cabbage and onions and it’s really important because it’s a delicious commodity. Everybody loves watermelons,” Cullinane said. “We’re excited about this donation. They really fly out of our agencies really quickly. Everyone loves them, especially in the summertime and moving into the fall. So we couldn’t be more grateful.”

Cullinane said donations like the watermelons from Wiggins Farms are needed now more than ever.

“We’ve been really fortunate because we’ve gotten a lot of donations, and we’ve really been learning about how generous this community is, particularly with the donation of fresh produce like this,” Cullinane said. “We’re here for the long run. This is not going to be a sprint. It’s a marathon. We need to continue to get quality donations like this to help sustain the families here in East Texas.”

Huntington said the watermelon industry is still trucking along, and Texas ranks in the top four states of watermelon producers.

“We’ve had a great year despite our pandemic. We’ve really been able to still push our produce and everything,” Huntington said. “Watermelon is a very nutritious fruit. It contains vitamins A, B6 and C. It’s 92 percent water so it’s a great hydrater. It’s also full of wonderful antioxidants.”

Huntington, a Jefferson native, said she was born into the agriculture industry with her father being a second-generation rancher.

“When the opportunity arose for me to run for the Texas Watermelon Queen position, I jumped on it because I thought that was a really cool opportunity for me to learn just a little bit more about the produce side of the agriculture industry,” she said. “It’s been an amazing journey. I’m so excited to help put East Texas on the map and our wonderful growers that live here.”

As National Watermelon Queen, Huntington would normally tour around the country spreading awareness about the watermelon industry. Due to COVID-19, several events are being held virtually.

She said one of the most important things to the watermelon industry is giving back and helping the local community.

In addition to her queenly duties, Huntington is a student at the University of Texas Health Science Center at Tyler pursuing a master’s degree in public health.