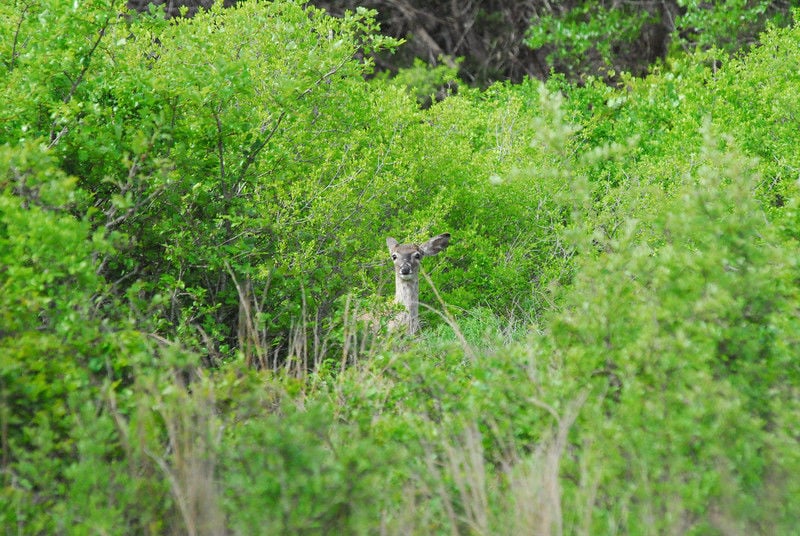 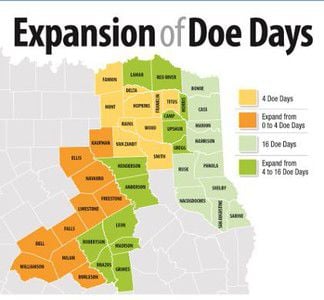 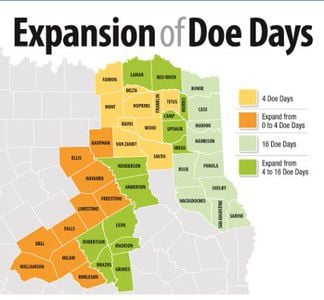 The future has already begun. The 2016 deer season will not open until Oct. 1, but changes made by Texas Parks and Wildlife commissioners last week open a path toward more hunting opportunity in portions of East Texas beginning this fall and into the future.

Make that a better chance to bring home some venison thanks to the expansion of the number of days in 13 counties and their creation in 10 others, and an expanded muzzleloader season.

East Texas continues to lag behind the state when it comes to liberalized antlerless harvest regulations. That is in part because of deer numbers in some counties and continued backlash to expansion in others. This should at least help hunters a little.

Approved for four does days for the first time are the Post Oak Prairie region counties of Bell, Burleson, Ellis, Falls, Freestone, Kaufman, Limestone, Milam, Navarro and Williamson. The doe-days season in those counties will run Nov. 24-27.

While not a perfect solution the four days are a start and an improvement over any form of doe permit system option previously available to some hunters based on acreage who can’t qualify for Managed Lands Deer permits.

The 16-day option is better because it gives hunters a longer chance to take a doe if some hunting days are lost to rain or the hunter can’t go Thanksgiving week for some reason. Coming early in the season the dates also put the hunters in the woods when the deer are easier to find.

There is a biological reason for the season. In recent years the deer population has increased more than 20 percent and as is often the case hunters haven’t kept up with the number of doe needed to be harvested.

According to TPWD Wildlife biologists the doe-buck ratio throughout the Post Oak region has climbed to an unhealthy 4 to 1. It is hoped that the doe days will start bringing that number down to at least 2 to 1 over time.

There are going to be landowners who will not like the idea of expanding the antlerless harvest no matter what system is used, but they always have the ability to opt out by simply telling their hunters no.

There is hope that this move is just the beginning of a move toward a full-season antlerless harvest, but that is the type of change that will not come quickly. Any additional days in the Post Oak and Pineywoods regions where doe days are most prevalent are at least four years away.

In other hunting regulation changes approved, the department will also expand the January muzzleloader-only open season into 32 additional counties in the Post Oak region. The season opens the day after the regular season and runs for two weeks. It is currently open in 58 counties in the Pineywoods, Oak Prairies and Trans Pecos regions.

Another change will allow youth hunters on U.S. Forest Service lands to take antlerless deer without an antlerless permit during the youth-only season.

Also approved at the meeting was a 90-day dove season in the state made possible by changes to U.S. Fish and Wildlife Service guidelines. The extension from the 70-day season in Texas and other central states came after a previous expansion along the East Coast.

Another change in the way the USFWS operates also allowed commissioners to approve waterfowl dates now instead of having to wait until August. This year’s season lengths and limits will remain the same as last year.

The statewide teal-only season will be open Sept. 10-25 with a six-bird limit. Concurrent with the teal season will be a Canada goose season in the East Zone. The limit for the geese in those 123 counties is three per day.

"The fear of the Lord is the beginning of wisdom, and knowledge of the Holy One is understanding." (Proverbs 9:10)