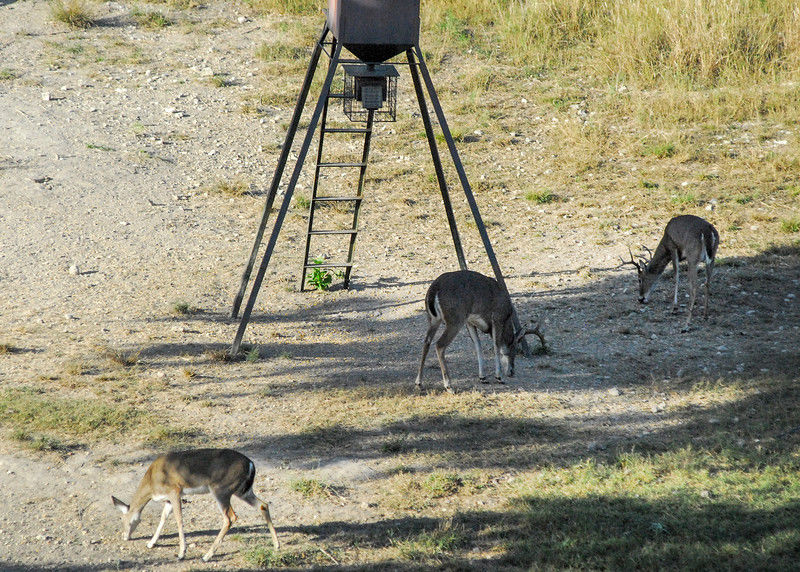 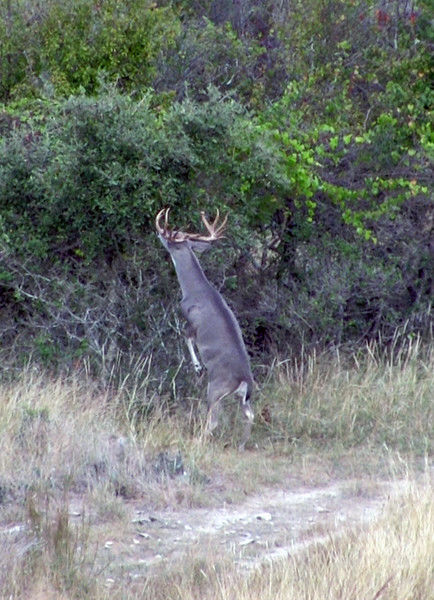 Hunters who want more quality bucks have to put in the work managing deer herd numbers. Getting deer numbers down now can help managing highs and lows in the future. (Steve Knight/Staff)

Hunters who want more quality bucks have to put in the work managing deer herd numbers. Getting deer numbers down now can help managing highs and lows in the future. (Steve Knight/Staff)

Hunters across Texas have seen deer herds build up since 2011 when drought across the state put reproduction into a tailspin.

In the last two to three years reproduction has been through the roof with some regions in Texas seeing fawn crop rates higher than 100 percent.

“They have an exponential birth rate. Potentially each doe can have twins, so they can double their population real quick if everything goes right,” said Trey Carpenter, former Texas Parks and Wildlife Department wildlife biologist and a current wildlife consultant on several private ranches. “We don’t normally see 200 percent fawn crops, but they have that ability. Younger does only have one fawn, but all put together they can bounce back quickly in one year.”

The Burnet resident was among a small group of hunters doing management work on a ranch in Kerr County last week where the landowner is tasked with removing 220 deer this year. The high harvest rate is the result of a couple of factors, but most importantly it is because he has been aggressive in harvesting deer in recent years which has lowered deer numbers on the range, but in turn increasing fawn crop survival.

It is an interesting conundrum, the better you manage a property the harder you have to work at it. In this case the landowner is coming out of the summer with a deer to three acres or more than 400 deer on just over 1,300 acres. His management objective is quality over quantity, and a browse line created through the cedar and other brush shows the work that needs to be done.

While this was a high-fenced ranch, hunters on low-fenced ranches are facing the same issue, and possibly even more difficult solutions.

“It is more critical on a high-fenced place because you have a captive heard. If it gets real bad on a low-fenced place they can kind of ease out of there. One of the things we have seen through the years if low-fenced it kind of creates a vacuum by shooting the deer down; then the deer from outside pour in to fill that void,” Carpenter said.

The problem is in years like the last three where spring/summer rains have been perfect for deer in the state. It is not uncommon for deer numbers to have outpaced the food source.

“That is where management comes in trying to even out those humps and valleys. On a place managed well you try to keep the population at or below carrying capacity so you don’t have those massive swings. Mother Nature can be pretty cruel when things get tough you can potential have die-offs, higher predation and those kinds of things,” Carpenter explained.

The biologist said deer numbers always cycle up and down, and the best way to manage a herd is to keep the highs from getting too high which in turn helps the lows from becoming too low.

“Ideally you would keep the population lower than it would naturally be, then you don’t have those swings as much,” he said.

In the rare case that the buck-doe ratio is close it is not coincidence. It is the result of years of management in which hunters not only take both bucks and does, but also keep herd numbers in check.

Because of the range conditions and acorn crop, hunters may not see many deer early this season causing them concern. Carpenter said when he worked for TPWD this would be the kind of year he would get calls from landowners and hunters who did not think they had deer because they were not coming to feeders.

“A deer is not stupid. They are not going to come into that trap unless they are hungry or looking to breed,” Carpenter said.

While encouraging hunters to shoot doe, Carpenter said hunters on low-fenced ranches that are looking for a big buck might want to take care of that first.

“I think if on low-fence places you start shooting the heck out of the woods you will run some bucks off. But ideally, especially in a high fence, if get the doe harvest early can scrunch your buck-doe ratio down and hopefully have more competition for the does left when they get bred and insuring the better bucks get to the doe for breeding,” he said.

Through the years Texas hunters’ attitudes have changed when it comes to harvesting deer. The adage of “getting my buck” is not heard as much as hunters practice management by taking does and letting young bucks walk until mature. Even the concern that a deer not shot on one ranch will certainly be shot across the fence has diminished some, at least when it comes to young bucks.

“In the last 10 years I have scored 10-12 deer within 50 miles of my house that qualified for B&C and that didn’t happen except maybe in the 30s or 40s when you had really low deer populations and big ranches still where deer could get some ages on them. Through management by regular old hunters of letting these deer walk that are really nice bucks and giving them one or two more years, we are reaping the benefit of the good old days when it comes to low-fence Texas. There are more big deer being killed than there ever has been,” Carpenter said.

“These commandments that I give you today are to be on your hearts. Impress them on your children. Talk about them when you sit at home and when you walk along the road, when you lie down and when you get up.” (Deuteronomy 6: 6-7)