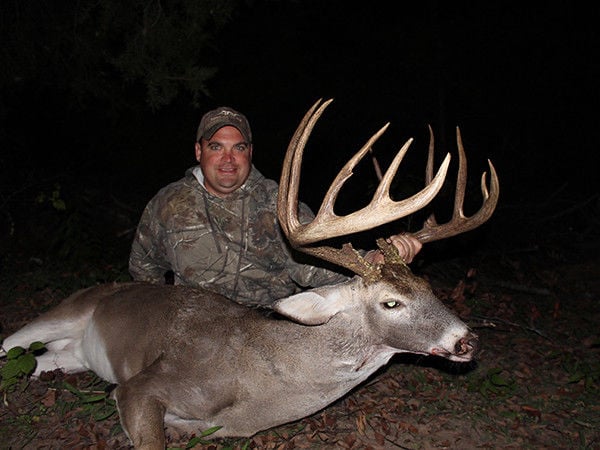 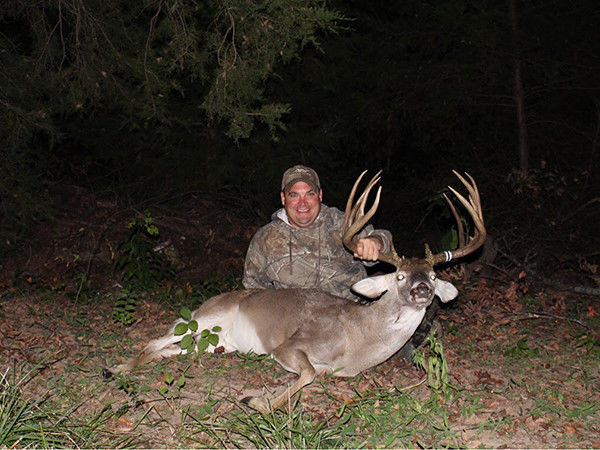 When it comes to big deer it is typically one and done. You get your best shot and it either works or it does not.

Either Mineola's Bryan O'Neal or the potential Boone & Crockett record book deer he took in northern Smith County did not get that memo. The 12-pointer was actually shot at three times over a two-week period before O'Neal dropped it on the fourth try.

O'Neal has been hunting 400 acres near the Sabine River since 2009. He has game cameras running, but had not seen this particular deer until opening weekend, and then he tried to let his son, Nicholas, shoot it.

"He has been hunting with me the last couple of years, but did not get the courage up to shoot until two or three weeks ago," O'Neal said.

As chairman of the local Whitetail Unlimited chapter O'Neal is big into promoting youth hunting. Letting his son have the first shot was important to him.

The first encounter with the buck was opening morning when they spotted it coming through the brush behind a doe. While O'Neal could see the deer's massive points, it never turned so they could see if it passed the 13-inch inside spread rule required in much of eastern Texas.

"We went back on Sunday. We were running a little late and got there right at daylight. As soon as we got in the blind we saw a doe then we saw a 6-point and then an 8. I told my son to get ready and as he was getting situated I looked over top of hill and saw another rack," O'Neal recalled.

He quickly told his son to wait on the bigger buck.

"All I could see was its rack. I could not see its body. It took 40 to 50 minutes for it to walk down the treeline," O'Neal said.

When it did it turned broadside for a 75-yard shot. Unfortunately the young hunter missed. Miraculously, it actually ran closer to the blind after the shot. O'Neal was about to shoot but again yielded to his son.

"He takes another shot, but he misses again," O'Neal said.

At this point the two got down to look for blood, but found none. They did see the deer in the woods, but could not get a shot.

A trip to the range showed the rifle was shooting so high even at short range it went over the deer's back.

O'Neal, who just took up deer hunting when he got on the lease, admits he is such a novice that he really did not understand what he was looking at in the buck. He knew it was big, just not how big. Because of that there was no sense of urgency to get back in the blind. The next Saturday he attended his daughter's softball tournament. After that he only agreed to go back out the next day at his son's request.

The day started slowly with a couple of deer coming out, but no shooters. It was also colder so after a short sit and a ride around the lease they headed home for a nap.

That afternoon was a comedy of errors starting with getting back into the blind late, leaving to help his wife search for a pig she had shot at and then the three of them marching back to O'Neal's stand at prime shooting time.

"We started walking up and when we topped the ridge I could see an 8-point by the fence with two does. We get in a stalking mode and so we could get where we could see what we were looking at," O'Neal said.

Again the young buck was under the 13-inch minimum spread, but the move made it easier to climb back into the stand. They watched the 8 until dusk. O'Neal told everyone to keep looking for silhouettes and if they spotted something they could check it out with the binoculars.

"About then the 12-point comes out and is walking down the woodline toward us," O'Neal said.

Before he can take the shot, however, he hears his son saying he wants to shoot. So O'Neal again gives him the shot. Raising his gun up the young hunter bumps the blind wall. Again the deer does not run.

"It must not have been as loud outside as it was inside because it sure scared me. The noise actually got the deer to stop long enough for Nicholas to take a shot. It was another miss.

"It paused for a second and looks at the blind. I followed up and dropped it in its tracks," O'Neal said.

It was not until he got it home and a friend saw it that O'Neal started to understand the exact significance of the deer.

They took it to another friend who had the gear necessary to score it.

As they were getting started another friend, Game Warden Kurt Kelley, drove up. Kelley called in another warden, Derek Spitzer, who is a Texas Big Game Awards scorer.

If the score holds through the 60-day drying period it will be the third B&C buck from Smith County, and easily the largest. The two previous entries were a 10-point 170 1/8 killed by Ricky Gandy and a 10-point 170 2/8 taken by Clyde Weaver.

Like the other two, O'Neal's deer is special because it came from small acreage. It also shows anything is possible, like four shots over two weeks at the same trophy.