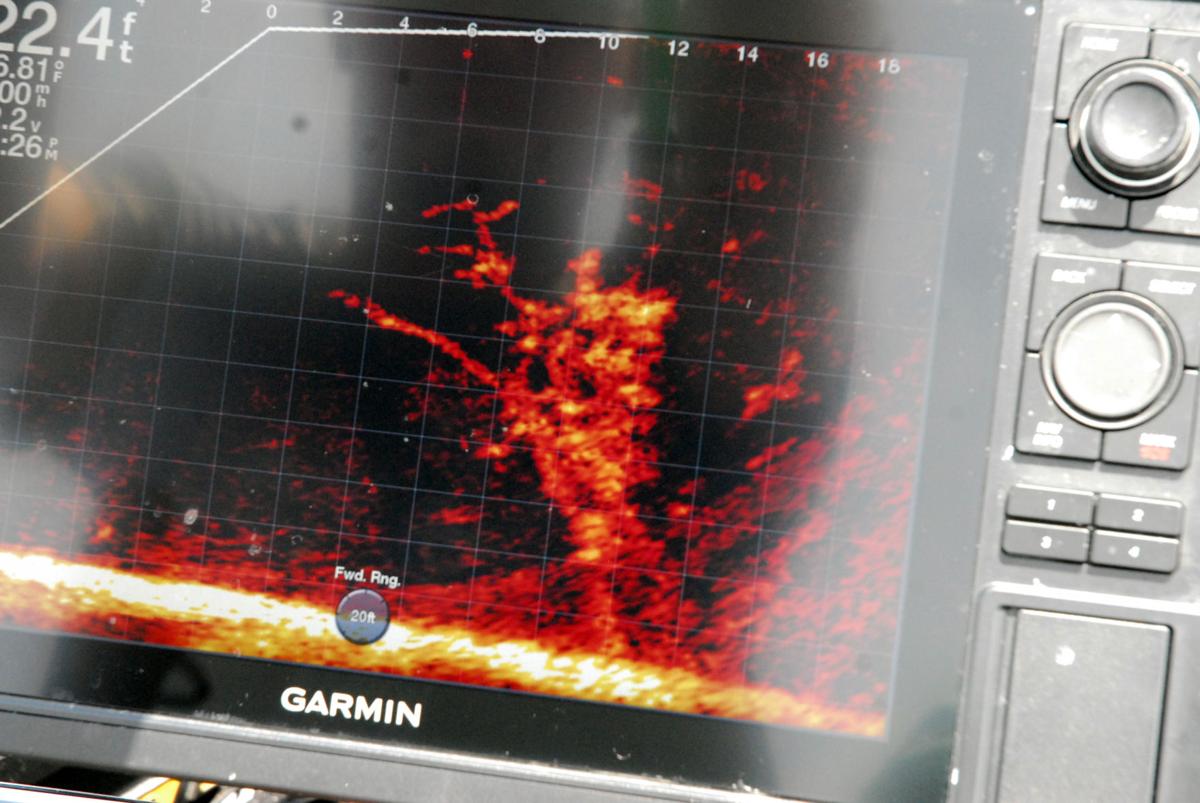 Fish finders have come a long way since the first flasher and with units like Garmin’s Panoptix Livescope fishermen get an even clearer view of what is under the water’s surface. 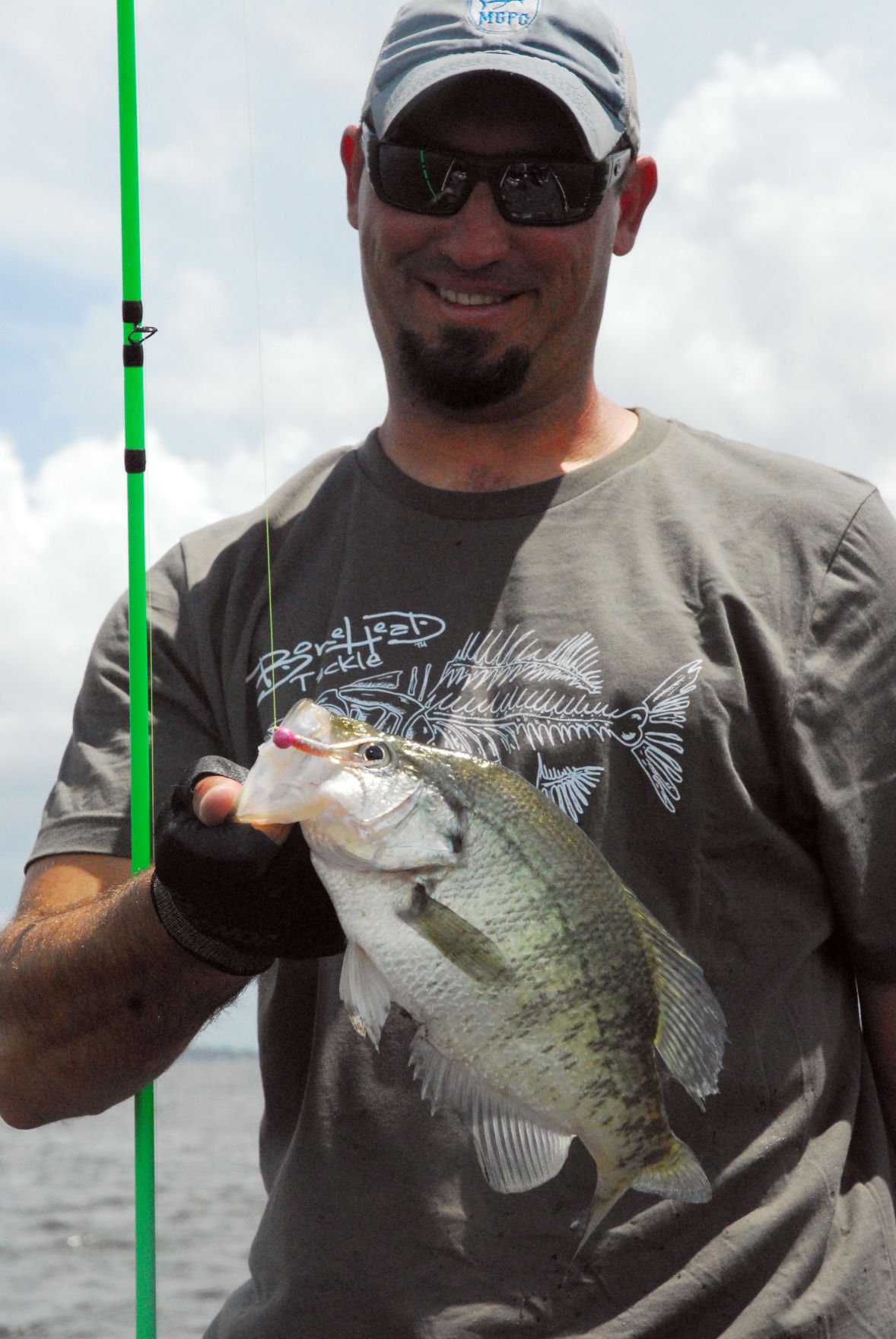 Crappie fishing guide William Oliver uses a Livescope fish finder not only to locate structure and fish, but to also identify the largest fish and to accurately place his bait to catch off the top of a submerged tree first.

Fish finders have come a long way since the first flasher and with units like Garmin’s Panoptix Livescope fishermen get an even clearer view of what is under the water’s surface.

Crappie fishing guide William Oliver uses a Livescope fish finder not only to locate structure and fish, but to also identify the largest fish and to accurately place his bait to catch off the top of a submerged tree first.

LAKE PALESTINE — Jimmy Houston once told me when he received his first Hummingbird flashing fish finder, he went home and told his dad that it was unfair because he was going to catch every fish in the lake. He didn’t.

Brownsboro crappie fishing guide William Oliver’s Skeeter boat is tricked out with the latest iteration of the fish finder, the Garmin Panoptix Livescope. He might catch them all.

It is hard to describe the Livescope other than it is where video game fishing meets the tug of the real thing. It is not the same technological stretch from the flasher to the current traditional fish finder transducer and screen, but it is certainly a leap in technology. Once a fisherman learns its nuances, it can help eliminate unproductive water, or maybe more importantly realize there are fish in what they had previously thought was fishless water.

“They used to say that 100 percent of the fish were in 10 percent of the lake. What we are finding is that they are everywhere,” said Oliver, who has been testing the system since it went on the market about a year ago, and had one installed a month ago at Tyler’s Nautical Mile Marine.

Oliver eased the boat out of the marina a short distance to the Neches River channel and rigged a 10-foot rod designed for use with the Livescope with a Blood Mud Stump Bug jig, both from Tyler’s BoneHead Tackle. With the Livescope on, he eased over a sunken tree. On the screen you could easily make out the limbs and trunk of the tree. It looked adorned with Christmas lights shining brightly. It was fish. A lot of them.

“There are some catfish,” he said, pointing to two large brightly shining objects on the lake’s bottom. “Those are crappie. There are a couple of big ones on that limb right there.”

As we attempted to hover over the fish with the GPS-guided trolling motor, I was astounded to watch some of the bright lights swim away while others moved to the tree. It was, for the lack of a better description, fascinating to watch. Almost unbelievable what you are seeing.

Oliver said the image was most like the sonograms used today in the medical profession. It shows a good image, but not an actual picture.

Satisfied with our location over the tree, he dropped the lure down. That was the really gee-whiz moment as the Livescope picked up the 1 3/4-inch bait on an eighth-ounce jig dropping toward the tree. Watching the Stump Bug descend, Oliver stopped it in front of two of the larger objects on the screens and slow lifted the jig.

And then he caught another, and another.

“I am catching the ones on the top of the tree first. The ones below them have no idea what is going on,” he said. The proof was they never moved as fish after fish disappeared from the screen and into the boat.

He could tell their size by looking at the image on the screen.

“On the grid at 20 feet it shows 24 squares on the screen and they represent about two feet each. So if the fish is about half a square in length, I know he is a big one,” he said.

As we eased to another tree, the screen showed several images that were much brighter than the rest. Oliver explained those were black crappie, thinking maybe because there bodies were denser than the white crappie they showed up differently on the screen.

With practice, he has learned the appearance of different sport fish on the screen, and has used it for bass, catfish, white bass and hybrids striped bass. In northern states, a unit is mounted on long handles and used for ice fishing.

“I can go out and find fish in new waters where I have never fished before,” said Oliver, adding it has made the almost 4,000 trees he has marked on his old fish finder almost obsolete.

While the Livescope will show fish as deep as 50 feet, he has found the best resolution to be down to 20 feet or so. It can also scan while the boat is moving full speed under trolling power.

Oliver said operation of the Livescope is simple. There is a learning curve to fishing with it. Depending on where the transducer is located, left can be right or it could require an adjustment by moving the rod tip farther out or closer. After a little practice, it all makes sense.

Watching the fish on the screen, Oliver said he has not only learned there are fish located in more locations than he ever imagined, but he has also been able to watch their reaction to his lure.

“I have learned a lot of little tricks. I learned that if you start to take the jig away slowly, they get aggressive in their strike,” he said.

It is easy to get caught up watching the fishes’ image on the screen, and them coming up after a jig. But like with all new things that fade with time, the Livescope just becomes another fishing tool, albeit like none before.

The Livescope does not come cheap. The complete package tops out at about $3,600 for the top of the line model, about the cost of a bass boat in 1974 when Hummingbird introduced the first Super 60 fish finder.

Garmin is not the only manufacturer in the market. Lowrance has introduced its Live Sight unit.

And there are detractors of the technology, but chances are they either do not have or cannot afford one of the units. It certainly cannot be because a Livescope guarantees catching a limit. It does not. Catching the fish still depends on the fisherman’s skills and whether the fish want to bite a certain lure or any at all. The key advantage is that it keeps fishermen working waters where there are fish instead of waters where they hope there are fish.

GPS-guided trolling motors, power poles set with an app on a telephone and now a fish finder that highlights the fish like nothing in the past. I asked Oliver what was next. Even he had no idea where technology may go next.