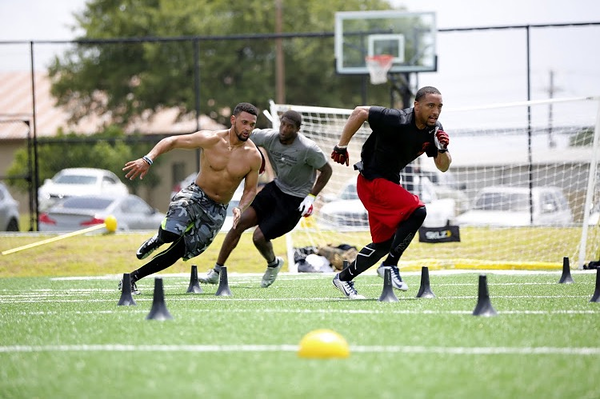 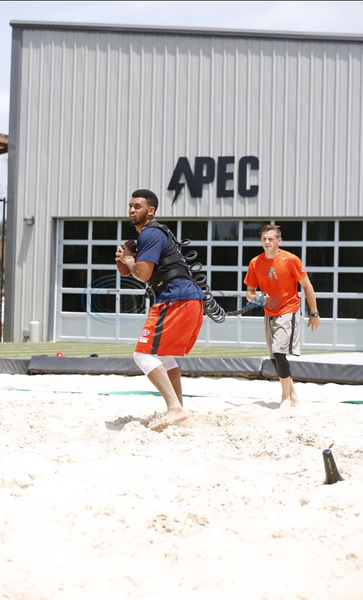 Dallas Cowboys quarterback Jameill Showers (left) practices his drop back with an APEC coach during a day of work at APEC. (Courtesy) 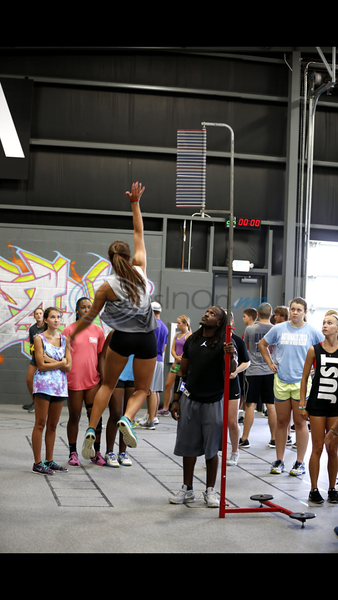 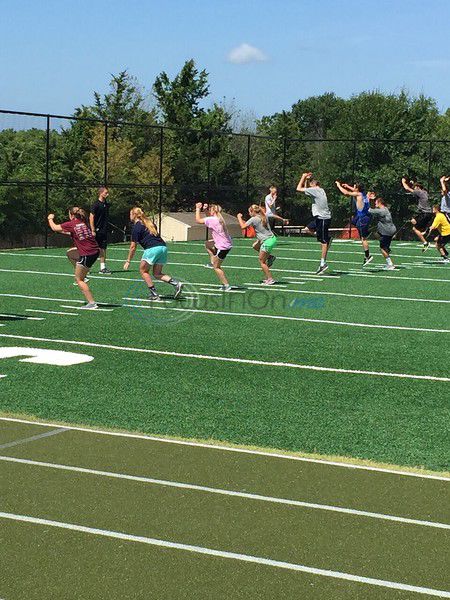 Athletes participate in a drill on the turf field outside of the APEC training center. (Courtesy) 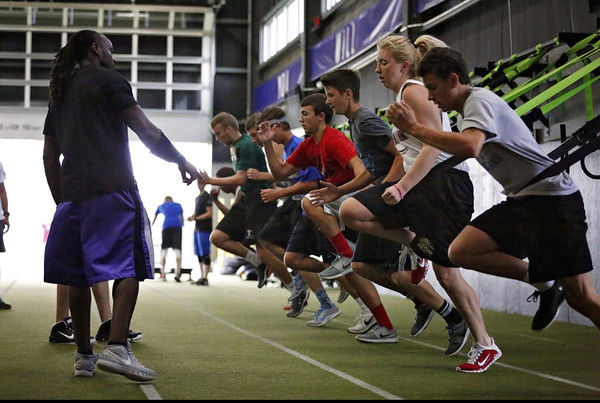 Athletes on a normal day of work at APEC. (Courtesy photo) 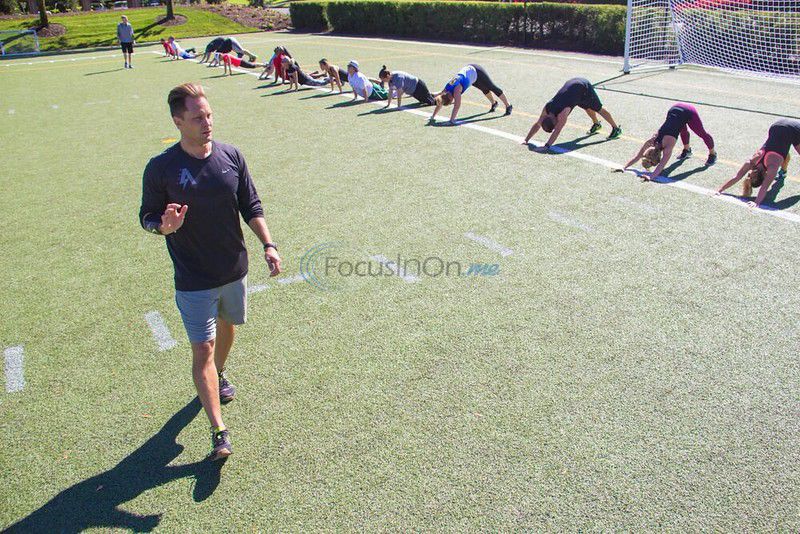 APEC director Bobby Stroupe (pictured) leads a training session for coaches and others interested earlier this fall at the Nike Roundtable conference in Oregon. It was the second time Nike has asked Stroupe and APEC to speak to its employees. (Courtesy photo) 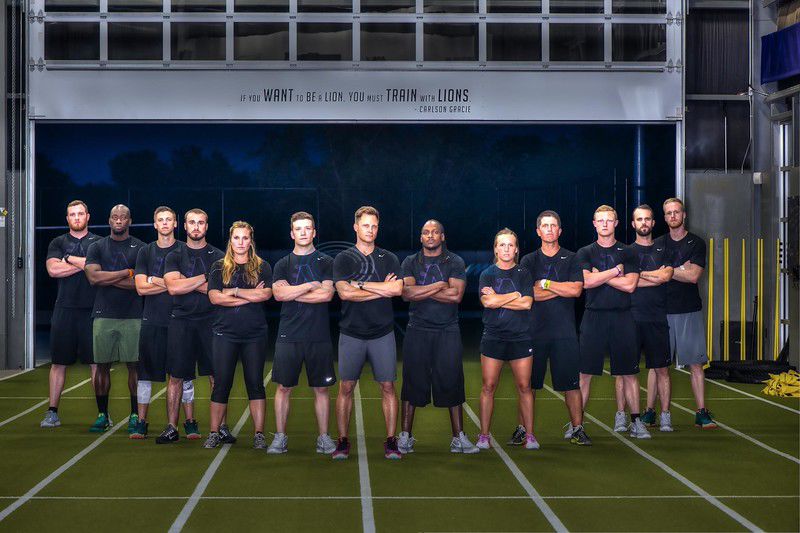 The athletic training staff at APEC in Tyler have been responsible for training athletes of all ages and ability levels. APEC has recently helped the likes of Bullard pitcher Nick Rumbelow reach his dream by becoming a major league pitcher with the New York Yankees.

Dallas Cowboys quarterback Jameill Showers (left) practices his drop back with an APEC coach during a day of work at APEC. (Courtesy)

Athletes participate in a drill on the turf field outside of the APEC training center. (Courtesy)

Athletes on a normal day of work at APEC. (Courtesy photo)

APEC director Bobby Stroupe (pictured) leads a training session for coaches and others interested earlier this fall at the Nike Roundtable conference in Oregon. It was the second time Nike has asked Stroupe and APEC to speak to its employees. (Courtesy photo)

The athletic training staff at APEC in Tyler have been responsible for training athletes of all ages and ability levels. APEC has recently helped the likes of Bullard pitcher Nick Rumbelow reach his dream by becoming a major league pitcher with the New York Yankees.

Earlier this fall, Bobby Stroupe was in Oregon by request of Nike. A couple years ago, he'd been asked up there to speak as part of a conference, but this time Nike asked Stroupe to bring members of his staff to teach their people how they were doing this.

How was a small athletic gym in Tyler churning out numerous NCAA Division I and professional athletes?

The "gym" is called Athletic Performance Enhancement Center or APEC for short.

"They came to us and asked us to organize a certification for their staff," Stroupe said. "It has been 2 years, but we developed it. We were their teachers and consulted with the young athletes division and what their message should be to youths as far as how much should they be running, what kind of shape should they develop, what activities should they encourage/discourage."

Kye Heck has been with Stroupe every step of the way. The assistant director of APEC was not sure what kind of reception they were going to receive upon arrival.

"We were pleasantly surprised. They were extremely receptive, way more receptive than I thought they'd be. We had 27 coaches who were there," Heck said. "People were just going crazy about it. It wasn't just Nike employees, which is what it was originally for, but they opened it up to the public and we had coaches flying in from all over."

Jameill Showers was at a crossroads. The Texas El-Paso quarterback was a month removed from playing in his final regular-season collegiate game. He still had the Gildan New Mexico Bowl to look forward to, but his NFL prospects were pretty bleak.

In his final season with the primarily rushing Miners, Showers tossed 15 touchdown passes and finished with 1,858 yards. Not exactly eye-catching numbers for pro scouts looking for a quarterback.

But Showers was committed and began working out at a facility in Phoenix, Arizona, but he did not like the results. While on a visit to his girlfriend's house in Tyler, she mentioned APEC, which stands for Athletic Performance Enhancement Center.

Showers was skeptical. How good could a training facility in Tyler be in comparison to the big ones he'd already checked out in California and recently Arizona?

"My girlfriend is from Henderson and she knew Tyrell Jenkins, who is a pitcher for the Braves who trained at APEC," Showers said. "She said why don't you go try it out. I went there for a couple sessions just to see if I liked it and it pretty much took off from there."

Bobby Stroupe is the creator and director of APEC. He said he met with Showers and was impressed by his willingness to "work his tail" off to succeed.

"He wasn't a highly-rated prospect. In fact, we had to call several agents to get him an agent. Someone had him rated 43rd out of all the quarterbacks in (2015 draft class)," Stroupe said.

At APEC Showers was put through an assessment test.

Showers weighed around 220 pounds, ran the 40-yard dash in 4.89 on laser timing and had a broad jump of 9 feet and vertical jump of 33 inches.

"Kye Heck and Tony Bush worked with him two times a day, and he and the other NFL prospects training here worked tirelessly with video, throwing mechanics, body composition, nutrition – I mean six days per week."

Showers said he began to see improvement in everything. On Monday's he worked on his straight-line speed for the 40-yard dash, on Tuesday's it was his vertical jump; Wednesday's was a rest day before ramping it up Thursday, Friday, Saturday and Sunday.

Trainers would film him with I-Pads to show him slow-motion videos and break down everything.

"He absolutely crushed it," Stroupe said.

Those measurable caught the attention of the Dallas Cowboys, who signed Showers as an undrafted free agent minutes after the final pick.

Now Showers had to make the team.

He made it through minicamp, but training camp was the true proving ground. Showers said APEC gave him an advantage.

"For two-a-days I was in the best shape of my life," Showers said. "The most tired I have been was on those hot days in Tyler. Once I got up to Dallas, it is the same weather, and in my opinion, practice wasn't half as hard as some of those workouts."

"Most people hate preseason football, but we love it," Heck said. "We have a lot of guys who are playing. Jameill was a big highlight and he's such a great guy, a humble guy and the epitome of hard work."

Showers made it through training camp and was signed to the practice squad.

"Its cool to watch him play and be successful and I think he has a bright future with the Cowboys," Heck said.

Success Story: "Be the best you."

Van senior running back Alphonso Thomas recently committed to Nebraska and Stroupe said his tireless work is the reason.

"When we started working with him three years ago, no one knew who he was," Stroupe said. "He wasn't starting or (playing that much even on JV). Alphonso got exposed and he has just soared."

Stroupe said for every professional APEC has created, he is just as proud for the number of athletes who ascended from the bench to a starting role or from JV to varsity.

"There are so many kids who are getting to start on their high school football teams who weren't even (getting playing time) two years ago even on JV," Stroupe said. "I feel that is more impactful from a life standpoint. I think that is more our mission here.

"The success we've enjoyed is not a credit to us, but to East Texas. Obviously, we love the opportunity to train professional athletes, but if we can capitalize on a kid who needs to get better to enjoy the sport at the highest level, or needs to get better just to get on the field, that is special."