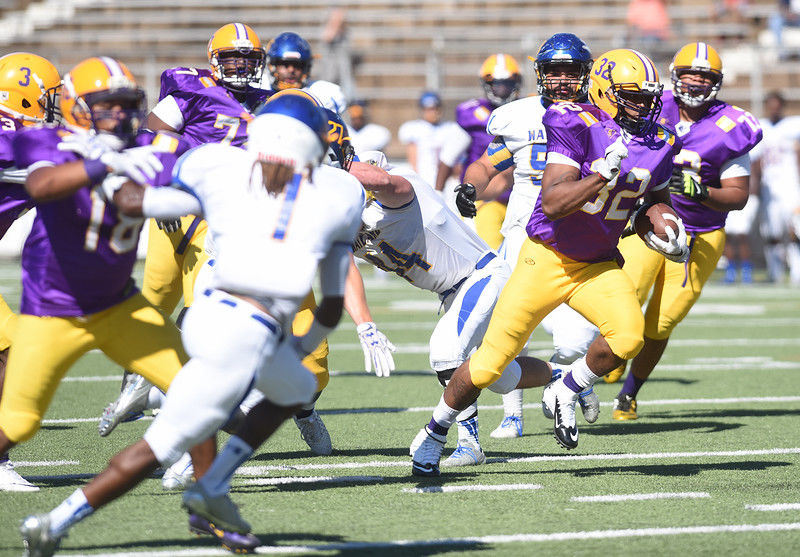 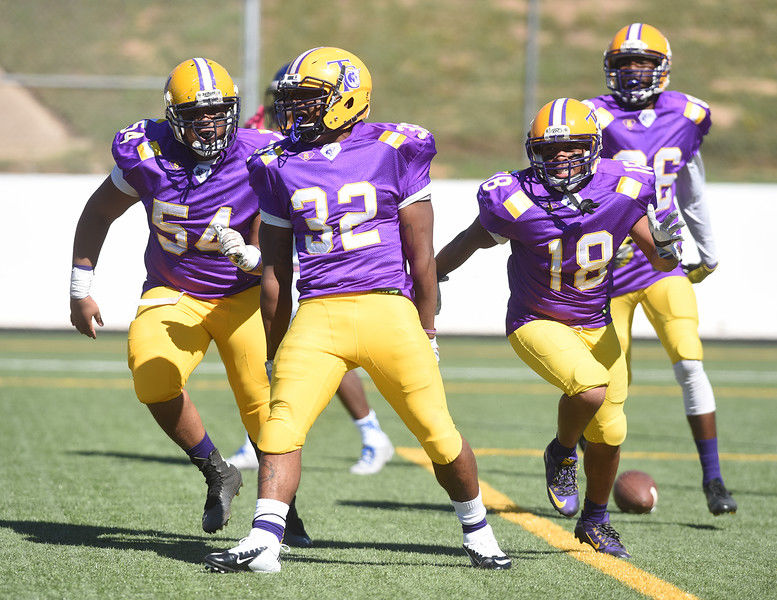 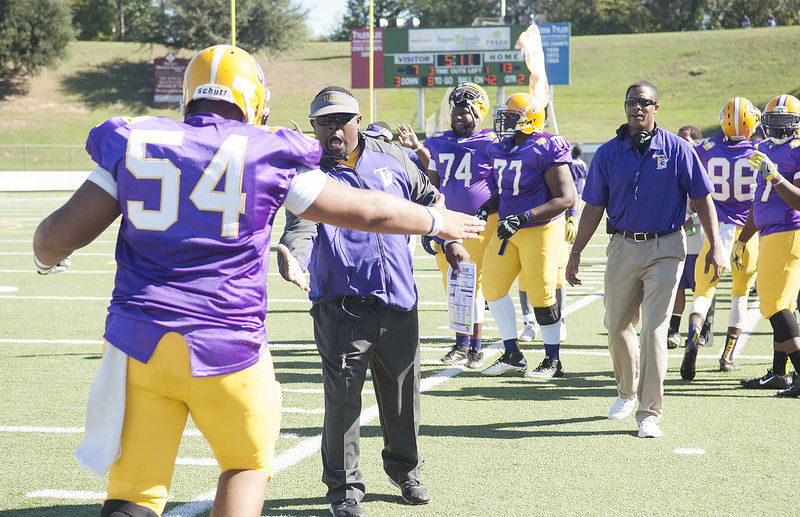 Texas College coach Gregory Ruffin congratulates his players, including Forrester Goodrich, after a touchdown in the first half of their homecoming football game against Wayland Baptist University held Saturday at Christus Trinity Frances Rose Stadium. (Sarah A. Miller/Tyler Morning Telegraph) 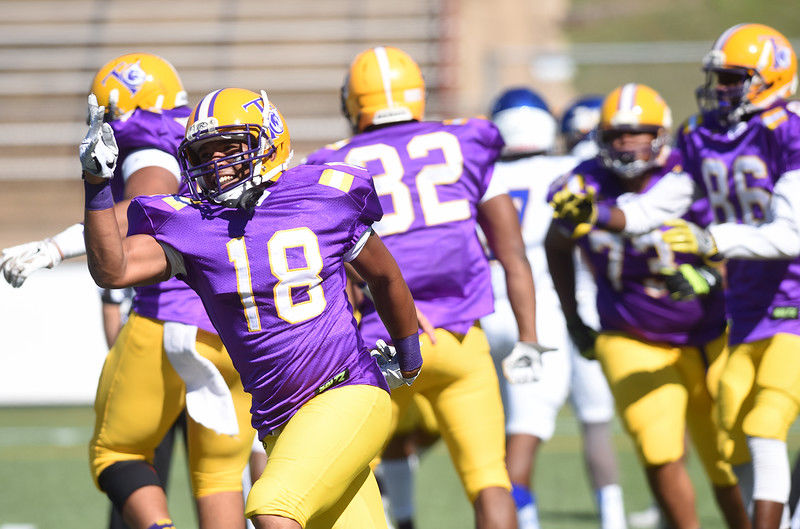 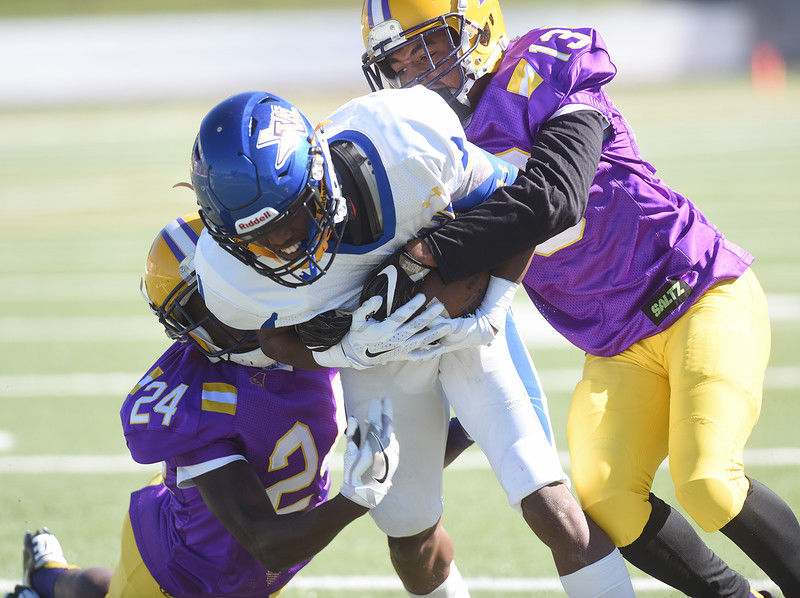 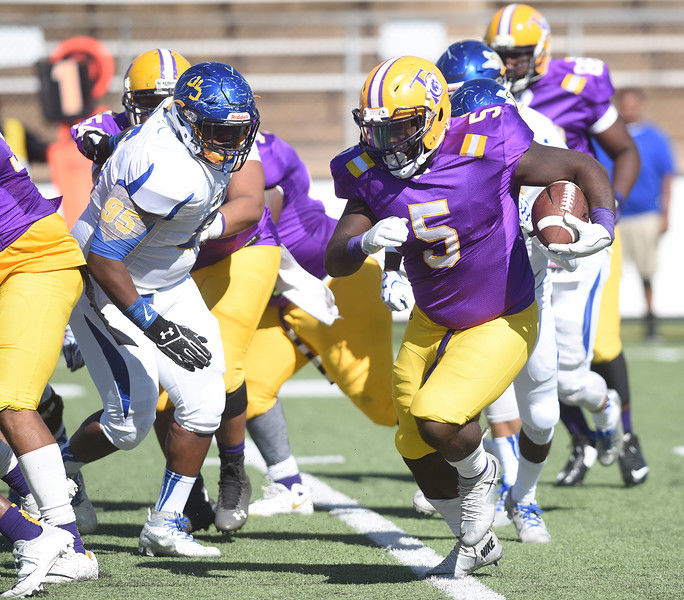 Texas College coach Gregory Ruffin congratulates his players, including Forrester Goodrich, after a touchdown in the first half of their homecoming football game against Wayland Baptist University held Saturday at Christus Trinity Frances Rose Stadium. (Sarah A. Miller/Tyler Morning Telegraph)

Texas College wanted to conclude Homecoming Week with a win, but Wayland Baptist was too tough in the second half.

Quarterback Mitchell Parsley tossed three touchdown passes to rally the Pioneers to a 41-14 victory over the Steers on Saturday at Christus Trinity Mother Frances Rose Stadium.

The Steers fell to 0-7 overall and 0-4 in Central States Football League play, while Wayland Baptist, which is located in Plainview, improved to 6-1 and 3-0.

The Steers had the momentum and the lead in the first half before the Pioneers scored on the final play of the second quarter as Parsley hit Trey Rowe with a 13-yard TD pass. Renato Dos Anjos' PAT put WBU up 17-14.

That last-second strike carried over into the second half as the Pioneers outscored the Steers 24-0.

TC quarterback Sean Still hit on 24 of 42 pass attempts for 237 yards and a TD pass of 42 yards to Phillip Callier. Carlos Mosby led the Steers in rushing with 11 carries for 60 yards and a TD, while Callier paced the club with four receptions for 62 yards and a touchdown.

Mosby got the Steers on the board first with a 29-yard TD dash with 4:54 to go in the first quarter. Deman Markese's PAT made it 7-0.

The Pioneers tied the game at 7-7 when Jerrell Peterson scored on a 25-yard run. Dos Anjos' kick was good.

In the second quarter, the Steers went back on top as Still connected with Callier for a 42-yard TD pass. Markese's kick was good and TC led 14-7.

However, the Pioneers scored the final 10 points of the half. The first came on a 22-yard field goal by Dos Anjos with 2:59 on the clock. The Parsley's TD pass put WBU up 17-14 at the half.

The Pioneers put up 10 points in the third quarter as Peterson scored from the 5, while Dos Anjos booted a 26-yard FG.

In the final period, Parsley passed to Roe for a 28-yard TD. The extra point made it 34-14. The final TD came on an 18-yard toss from Parsley to Preston Woodard.

Parsley was 22 of 31 for 392 yards and three TDS, while Woodard had five catches for 114 yards and a TD. Rowe added six receptions for 83 yards and two TDs.

On the ground, Peterson carried the ball 17 times for 70 yards and a TD.