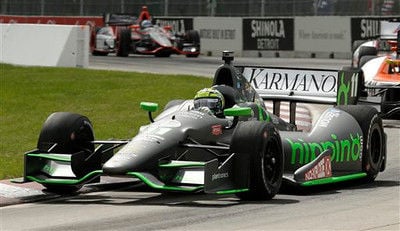 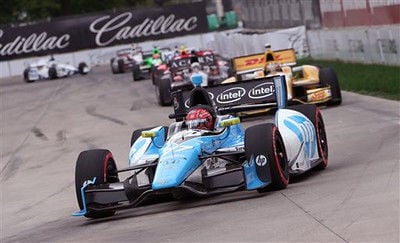 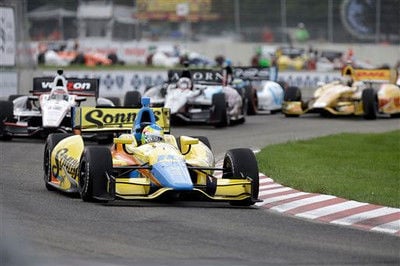 Although drivers from Andretti and Penske are tied for the IndyCar Series points lead, it's the small teams that are currently dominating the competition. Last weekend in Belle Isle was almost surreal as Mike Conway led the way for Dale Coyne Racing, which put two cars on the podium Saturday, and then team owner Sam Schmidt scored his first career IndyCar victory Sunday behind Simon Pagenaud.

The strong showing from the little guys came on the heels of Tony Kanaan's victory in the Indianapolis 500, the first official win for KV Racing Technology and the second time in three years a small team has won "The Greatest Spectacle In Racing." Bryan Herta Autosport won the race in 2011 with Dan Wheldon.

The win was huge for KV Racing: It led to primary sponsorship from Sunoco, in association with the Dreamworks animated movie "Turbo," for the four remaining unsold races on Kanaan's car. Filling the inventory means the team can complete the season without financial stress.

All told, there have been six different winners in seven IndyCar races this season and none of them drive for mighty Chip Ganassi Racing or Team Penske. Although Andretti Autosport has three wins, two of them belong to James Hinchcliffe, who scored his first career victory in the season-opener at St. Pete and passed Takuma Sato in the final turn at Brazil last month for his second win.

And Sato? Why, he gave AJ Foyt Racing its first win since 2002 when he won at Long Beach in April.

What's up is now down in IndyCar, which heads to Texas Motor Speedway this weekend for a Saturday night race where road-and-street course ace Justin Wilson is the defending winner.

"We never know who is going to be on top each weekend," said Pagenaud, who scored his first IndyCar win Sunday to take Schmidt, the winningest team owner in Indy Lights, to Victory Lane in the big league.

"It's great to see what IndyCar has been able to provide, a product that's helping every team to be able to be competitive," Pagenaud said. "There's a lot of smart people in every team right now. It's about who's going to be the smartest every weekend. But it's certainly very, very competitive, very difficult to pick a winner every race."

What's most impressive about this surge from the small teams is that they are doing it with smaller budgets and fewer personnel at a time when the IndyCar schedule is pushing everyone to their limits. The Indianapolis 500 is a grueling event in itself that begins days after the cars are shipped back from Brazil. There was no rest at all before the teams moved on to Detroit for the first doubleheader in series history, and now it's off to Texas.

"I've now been away from my home for four weeks straight. I'm living it every day with the crew," Schmidt said after Detroit. "The 48-hour turnaround after Indy, literally 48 hours they left our shop for moving (to Detroit). We're all pushing the same direction. Nobody had their heads down. They knew what they had to do and they got it done. Kudos to the drivers for keeping the cars in one piece. That made life easier. But the next three or four weeks is not going to be easy."

Nobody knows how long this streak will last, and it's implausible to think Dario Franchitti, Scott Dixon, Will Power and Helio Castroneves will be kept out of Victory Lane much longer. But the start of the season has been entertaining and healthy for IndyCar.

KENNEDY WINS: The name in Victory Lane at Bowman Gray Stadium last Saturday night may not have been a familiar one, but the family most certainly was.

Ben Kennedy, the 21-year-old great-grandson of NASCAR founder Bill France Sr., captured his second career K&N Pro Series East win at the track France brought auto racing to in 1949. On hand was his mother, Lesa France Kennedy, who was present for a victory for the first time.

But it was a significant win for Kennedy because of his family history at the track. Betty Jane France, his grandmother, is from Winston-Salem and was a former Miss Bowman Gray Stadium. She met her husband, the late Bill France Jr., at the track when he worked there promoting races for his father.

CHASE ELLIOTT: Chase Elliott took a major step toward racing on superspeedways Wednesday when he tested an ARCA car at Pocono Raceway.

Elliott took advantage of an ARCA Racing Series rule change that allows 17-year-olds to drive at both Pocono Raceway and Kentucky Speedway this year as long as they complete a test and meet other requirements by the series.

"This is really a whole new experience for me," Elliott said. "I've never been on a place this big. The car felt really good, as best as I can tell. I know the car's fast. If we're not completely up to speed, it's just me not carrying enough speed through the corners. I'm still getting used to what this place is all about, and what it needs from a driver. I think I was a little off on the first run, but I'll get there."

Elliott was at Pocono Raceway in a Hendrick Motorsports car with crew chief Lance McGrew. His father, 1988 NASCAR champion Bill Elliott, was also on hand. It's been more than a decade since ARCA allowed a 17-year-old on a superspeedway. NASCAR does not permit it, although the Truck Series permits 17-year-olds to race on tracks one mile or shorter. Elliott raced at Dover last week in the Truck Series.

Three 17-year-olds, Elliott, Erik Jones and Taylor Ferns, were scheduled to test at Pocono Raceway on Wednesday in an attempt to get ARCA approval to race either this weekend or in August.

"We recognize that our sport is generating a greater number of younger drivers with a broader base of experience," said ARCA President Ron Drager.

RACE TO THE CLOUDS: Simon Pagenaud will make his "Race to the Clouds" debut later this month when he drives a highly modified Honda Odyssey as part of Honda's record 11-vehicle, nine-class effort at the 2013 Pikes Peak International Hill Climb.

Pagenaud will drive a turbocharged, 500-plus horsepower Honda Odyssey, originally developed for competition by associates at Honda Manufacturing of Alabama.

"This is something I'm really looking forward to," Pagenaud said. "I've done a little bit of rallying in France, and I used to watch highlights of the Pikes Peak race on television as a kid. Our entry will be unique, to say the least. A Honda Odyssey with power similar to an IndyCar will raise some eyebrows for sure."