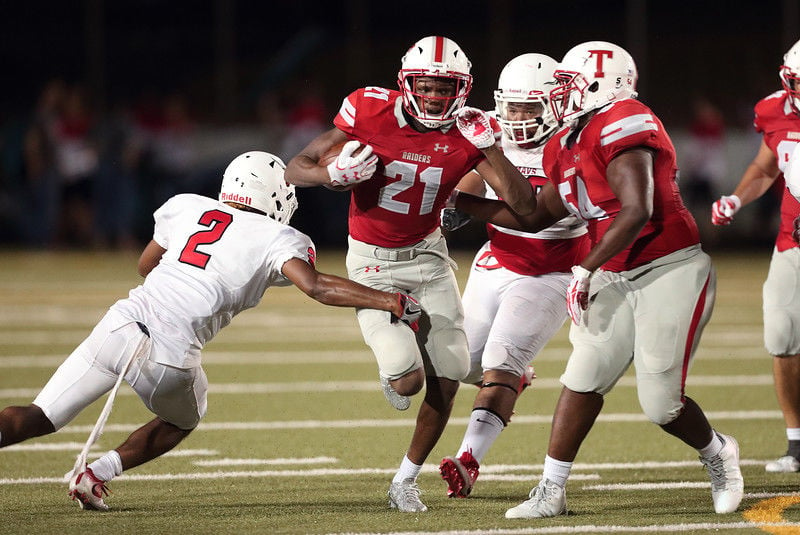 Robert E. Lee's Ladarious Wickware (21) breaks another tackle on his way to a big gain, during the first half of the Red Raiders game with Marshall at CTMF Rose Stadium, Friday night. (Lang White / Correspondent) 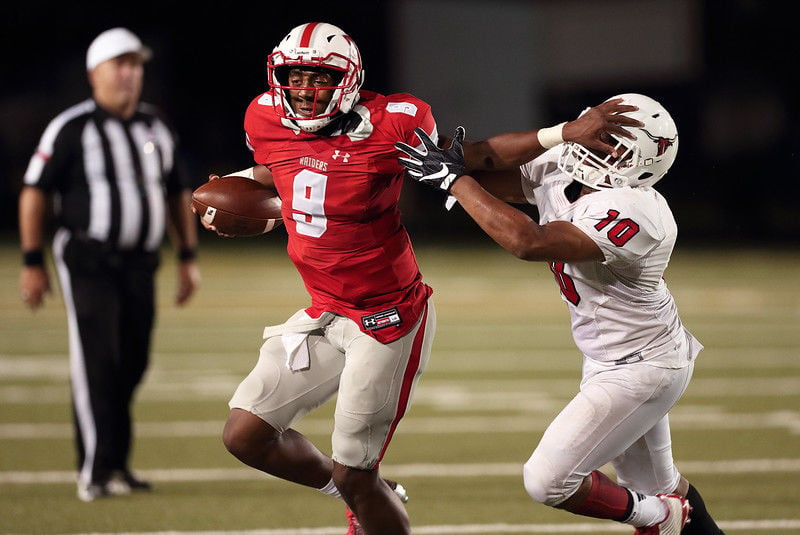 Robert E. Lee's QB Chance Amie (9) stiff arms a Maverick player on a sweep to the outside, during the first half of the Red Raiders game with Marshall at CTMF Rose Stadium, Friday night. (Lang White / Correspondent) 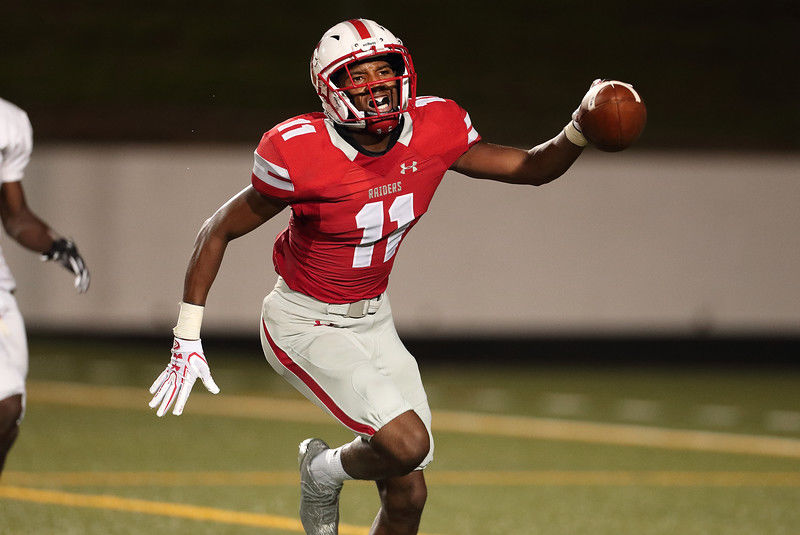 Robert E. Lee's Ladarious Wickware (21) breaks another tackle on his way to a big gain, during the first half of the Red Raiders game with Marshall at CTMF Rose Stadium, Friday night. (Lang White / Correspondent)

Robert E. Lee's QB Chance Amie (9) stiff arms a Maverick player on a sweep to the outside, during the first half of the Red Raiders game with Marshall at CTMF Rose Stadium, Friday night. (Lang White / Correspondent)

CORSICANA - Robert E. Lee put on a show in its season opener, rushing for 429 yards in a 34-7 victory over Marshall.

Lee coach Clayton George said he was pleased with his team's start, but added it was just a start.

"You want to build on your Week 1 success," George said. "I think teams show the most improvement between Weeks 1 and 2, so we went back to work (on Monday).

"We have a tough opponent in Corsicana but we are still focusing on ourselves to try and make sure we get better every day."

The Tigers began their season on the road at Red Oak, a team that went winless in 2015, but proved a tough nut for Corsicana to crack. An offensive standstill eventually went to overtime with Corsicana winning 13-7.

A forced fumble by Corsicana in overtime on Red Oak's first possession enabled Tigers quarterback Kishawn Kelley to score on a keeper for the game winner.

Red Oak held the Tigers to 127 yards rushing and 223 total, scoring once in the first quarter and again in overtime.

"On both sides of the ball Corsicana plays a physical style of football," George said. "(Kelley) is a good quarterback who is back this year and their offense runs through him and we will definitely have to stop him."

A season removed from allowing opponents to rush for 241 and throw for 316 per game, the Red Raiders limited Marshall to six first downs and 85 yards - total.

Lee surrendered one touchdown with Marshall taking advantage of a 76-yard kickoff return. It was the first time REL had held a team to seven points or less in a game since 2009 (24-3 win over North Mesquite).

Junior quarterback Chance Amie has now won his last two starts. He secured a victory in the middle of last season over Garland Lakeview Centennial in relief of then-starter Zach Hall, who as injured.

Now as the No. 1 under center, Amie was an efficient 5 of 9 for 59 yards and a touchdown through the air to go with 133 yards rushing and a score on the ground, averaging 7.8 per carry.

The last time REL and Corsicana faced off on the gridiron in a regular-season contest was 2001. Lee won that game 35-3.

A win over Corsicana would give Lee its first 2-0 start since 2005. George said his team must stay focused on what got them its victory in the opener.

"We have to go out and play our style of football," George said. "I like the way we started last week, setting our identity on who we are and what we want to be. Obviously we are not there yet. We have not arrived.

"Last week was a good start, but last week was last week. We have a tough game this Friday in Corsicana and we need to go out and take care of our gameday expectations and play fast, play physical and play smart. At the end of the night, hopefully we will get there and have more points than they do."

Last Year: Did not play

Quick Slant: REL will hope to continue its look back to 2001 and emulate another runaway victory. The Red Raiders defeated Marshall by 25 in 2001 and 27 last week. That was the last time the two teams had met on the gridiron. Lee's last meeting with Corsicana was also in 2001, a 35-3 triumph for the Red Raiders. Judging from last week, Lee is definitely capable of achieving such a margin. Lee rushed for 429 yards as a team, highlighted by sophomore LaDarius Wickware who carried 32 times for 212 yards and 2 TDs last week. On defense, Marshall was held to 85 total yards with Lee LB Royland Black led an REL defense that shut down Marshall last week, holding the Mavericks to 6 first downs. Corsicana needed a late TD to win its opener over Red Oak. The Tigers averaged nearly 300 yards per game on the ground last year, but were held to 127 by a Red Oak team that went winless last season.