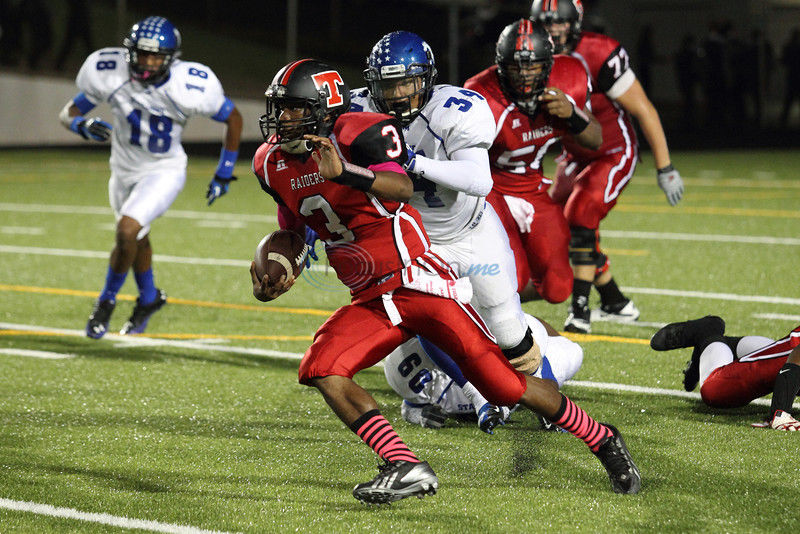 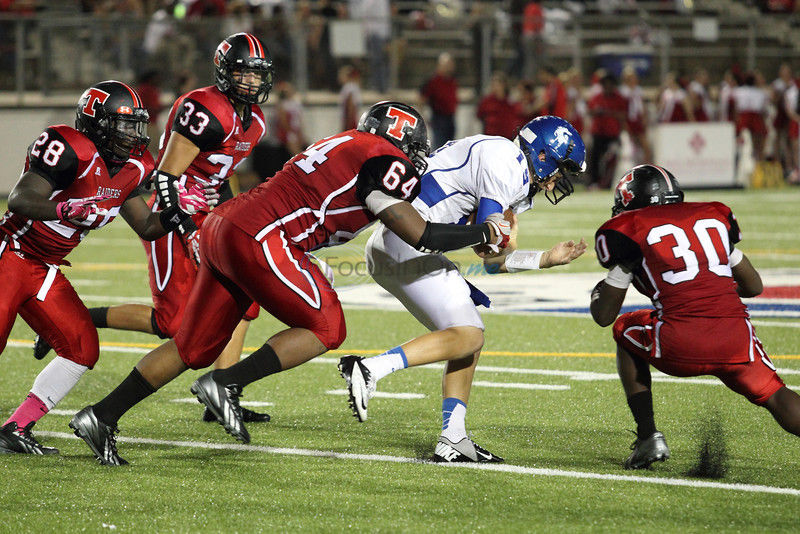 Everything looked promising as Robert E. Lee pushed for a come-from-behind homecoming victory.

And then it unraveled and REL did not have enough time to recover.

The new monarch helped lead the Red Raiders to its first touchdown of the night when he raced down the seam and hauled in a 32-yard completion from quarterback Zach Hall. This put Lee at North Mesquite's 25 and Juwan Banks did the rest, rumbling in from 21 yards out into the end zone. Chris Blas' extra point made it 17-10 with 1:46 remaining in the third quarter.

Wilkerson finished with a career-high nine receptions for 129 yards while also rushing for 20 yards.

The Red Raiders forced a three-and-out and quickly moved to within a point, thanks to another long hookup between Hall and Wilkerson, this one covering 35 yards. An 18-yard run by Tavon Wesley was followed by a 3-yard scoring plunge by the sophomore to make it 17-16 with 11:49 left.

Only the PAT remained to tie things up, but for the first time this season, that did not happen.

The kick never got off the ground and North Mesquite still led. The Stallions then turned that fortune into an onslaught, scoring two unanswered touchdowns to push ahead 31-16 with 4:19 left.

The Red Raiders attempted what would've been a miracle comeback in the last 1:30 as Raleigh Poster led Lee on an 80-yard drive, capped by a 22-yard TD pass to Marquiston Williams. The two-point conversion failed, however, meaning REL still needed two scores while trailing 31-22.

With one timeout remaining and 30 seconds on the clock, REL tried an onside kick, but it was recovered by North Mesquite's Jordan Hill to preserve the Stallions' victory.

"I really don't have much to say; we just didn't come out fighting and played (bad), tried to battle back and after we get the momentum we miss the extra point and you can't do stuff like that," Lee coach Darrell Piske said. "We just have to come back on Monday and go to work."

North Mesquite quarterback Cody Williams was 11 of 15 passing for 198 yards and three touchdowns while also scoring on a 30-yard keeper. Corey Hunt rushed for 123 yards on 16 attempts.

The Red Raiders and North Mesquite were tied 3-3 at the midway point of the second quarter, thanks to a 28-yard field goal from Alvarado and 39-yard kick by Blas.

The Stallions had been stymied up to this point by Lee's defense, but on second-and-13, Williams faked a handoff to Hunt up the middle and kept it himself. REL's defense bit on the play, leaving one blocked player for Williams to navigate past en route to a 30-yard touchdown.

North Mesquite doubled its lead just before halftime on a deep fade pass from Williams to Kayveon Brown, who outdueled Lee's corner to make a one-handed 15-yard catch for the touchdown and a 17-3 lead at halftime.

Piske said the missed PAT was "huge" as far as a momentum swing.

"You get fired up because you think you are about to tie and then (we miss it)," Piske said. "You just have to be able to finish that stuff when you get that momentum back."

The Red Raiders achieved a first down on the ensuing drive, but penalties, a near fumble and an incompletion gave North Mesquite the ball back.

A 55-yard punt by Lee's Paxton Potter pushed the Stallions back, but on third-and-7 from the 44, Williams lofted a screen pass to Ta'Varius Luke, who proceeded to run 56 yards, breaking four separate tackles along the way for a touchdown.

Poster was able to pull Lee within nine points, driving REL 80 yards in just over a minute to make it 31-22 on the pass to Williams, but it proved not to be enough.

The Red Raiders are idle next week before returning to district play on the road against Rockwall.