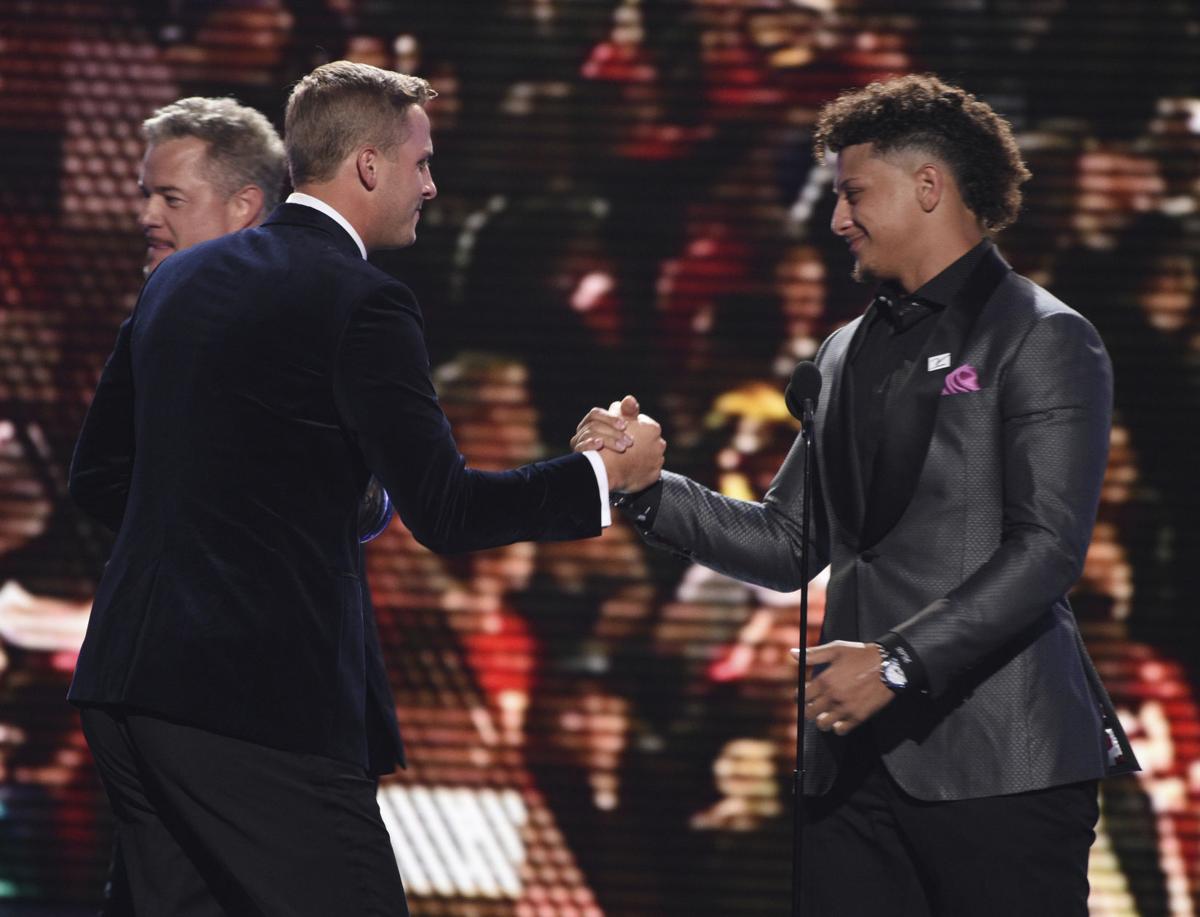 NFL players Jared Goff, of the Los Angeles Rams, left, and Patrick Mahomes, of the Kansas City Chiefs, accept the award for best game on behalf of their teams at the ESPY Awards on Wednesday, July 10, 2019, at the Microsoft Theater in Los Angeles. (Photo by Chris Pizzello/Invision/AP) 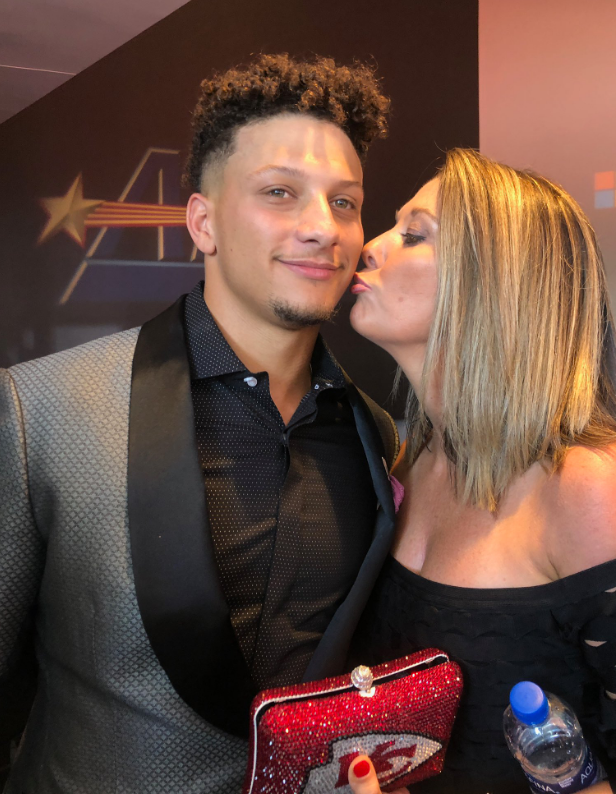 Patrick Mahomes receives a kiss from his mother, Randi, before the ESPYs on Wednesday in Los Angeles.

NFL players Jared Goff, of the Los Angeles Rams, left, and Patrick Mahomes, of the Kansas City Chiefs, accept the award for best game on behalf of their teams at the ESPY Awards on Wednesday, July 10, 2019, at the Microsoft Theater in Los Angeles. (Photo by Chris Pizzello/Invision/AP)

Patrick Mahomes receives a kiss from his mother, Randi, before the ESPYs on Wednesday in Los Angeles.

Patrick Mahomes took home some more hardware during the 27th Annual ESPYs held on July 10, 2019, at  the Microsoft Theater in Los Angeles.

Mahomes, the former Whitehouse High School star and current Kansas City Chiefs quarterback, won the ESPY for the “Best NFL Player” in ESPN’s annual awards show, one of the two categories for which he was nominated. Mahomes was also up for “Best Male Athlete,” which was won by the Milwaukee Bucks star Giannis Antetokounmpo.

The “Best NFL Player” award caps an astonishing season for Mahomes, who threw for 5,097 yards and 50 touchdowns. He was just the third player in league history with 50 or more touchdown throws in a season, joining Patriots quarterback Tom Brady and former Colts quarterback Peyton Manning. Mahomes was on the All-Pro team and was the NFL’s MVP.

Mahomes beat out Aaron Donald and Todd Gurley of the Rams and Saints quarterback Drew Brees for that ESPY.

ESPY is short for Excellence in Sports Performance Yearly Award.

The Chiefs and Rams game was voted Game of the Year, a Los Angeles 54-51 win on Monday Night Football. Mahomes and Rams’ QB Jared Goff accepted the award and dedicated it to the First Responders.

Mahomes attended the ESPYs with his girlfriend, Brittany Matthews, and his mother, Randi Mahomes.

During a visit after that on “Jimmy Kimmel Live,” Mahomes was asked who he is taking to the ceremony.

“I got my girlfriend who is here with me right now somewhere backstage, and then I have my mom is coming with me, too,” Mahomes said. “When I was in college, she said if I make the ESPYs or I if I get to go there, she wants to be my date.”

Bobby Witt Jr. realized a childhood dream, getting selected No. 2 overall by the Kansas City Royals in the major league baseball draft.

The younger Witt added another honor, too, when he and softball pitcher Kelley Lynch were named national prep athletes of the year on Tuesday night.

The son of former major league pitcher Bobby Witt, the Witts are the first father-son duo to be selected in the top three of the draft.

“He pretty much taught me the game since I was little,” said the younger Witt, who pitched and played shortstop. “It’s 90% mental and 10% physical and he’s always taught me that and instilled the hard work.”

Witt Jr. is skipping college to play in the Arizona rookie ball league with an eye on the major leagues.

“It’s been a goal of mine ever since I was little,” he said.

He received his trophy from retired NFL great Peyton Manning, a former winner.

Witt Jr., of Colleyville, Texas, batted .482 with 15 doubles, nine triples and 15 home runs, compiling 55 RBIs — 28 of which came with two outs. He led Colleyville Heritage High to a 39-3 record and the Texas Class 5A state title.

The younger Witt had a 4.0 grade point average.