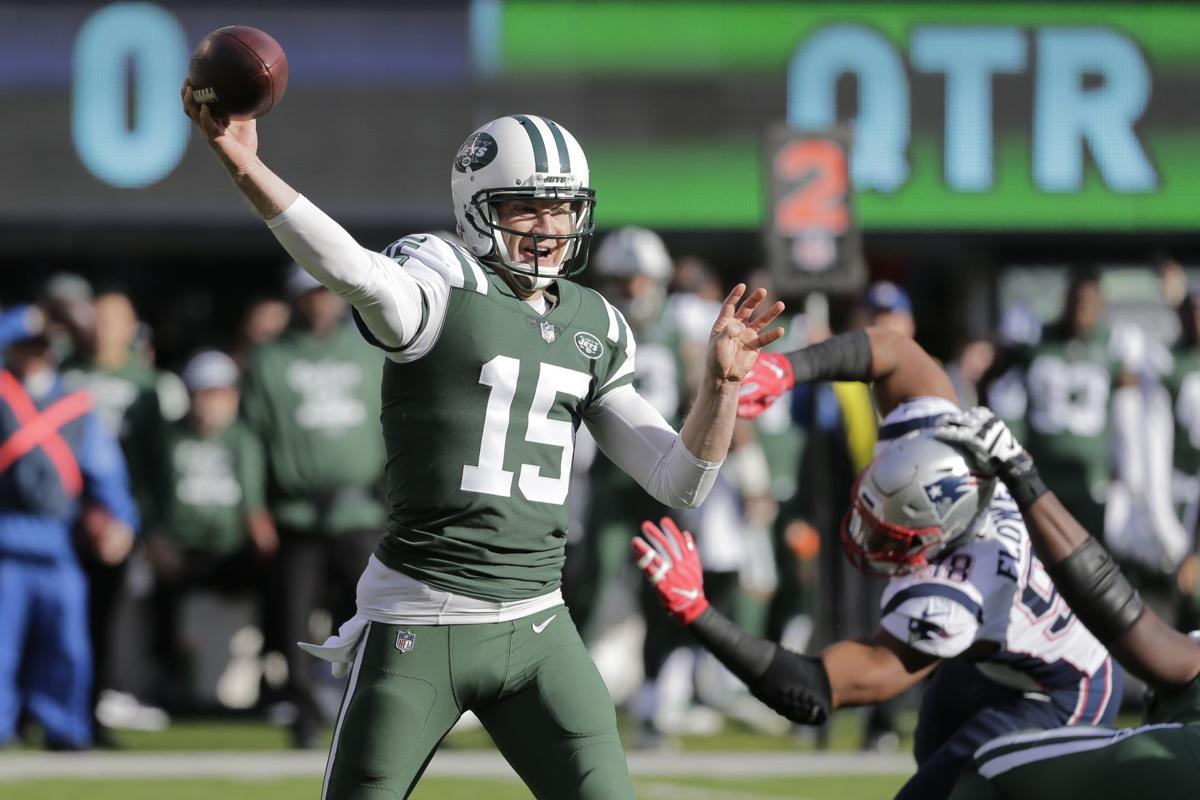 FILE - In this Nov. 25, 2018, file photo, New York Jets quarterback Josh McCown (15), a former Jacksonville High School star, throws a pass during the first half of an NFL football game against the New England Patriots, in East Rutherford, N.J. McCown has announced he is retiring from playing football after an NFL career that spanned 16 NFL seasons and included stints with 10 teams. McCown, who turns 40 on July 4, writes in a piece for The Players' Tribune on Monday, June 17, 2019, that he will be helping coach his two sons — also quarterbacks — in high school this year.(AP Photo/Seth Wenig, File) 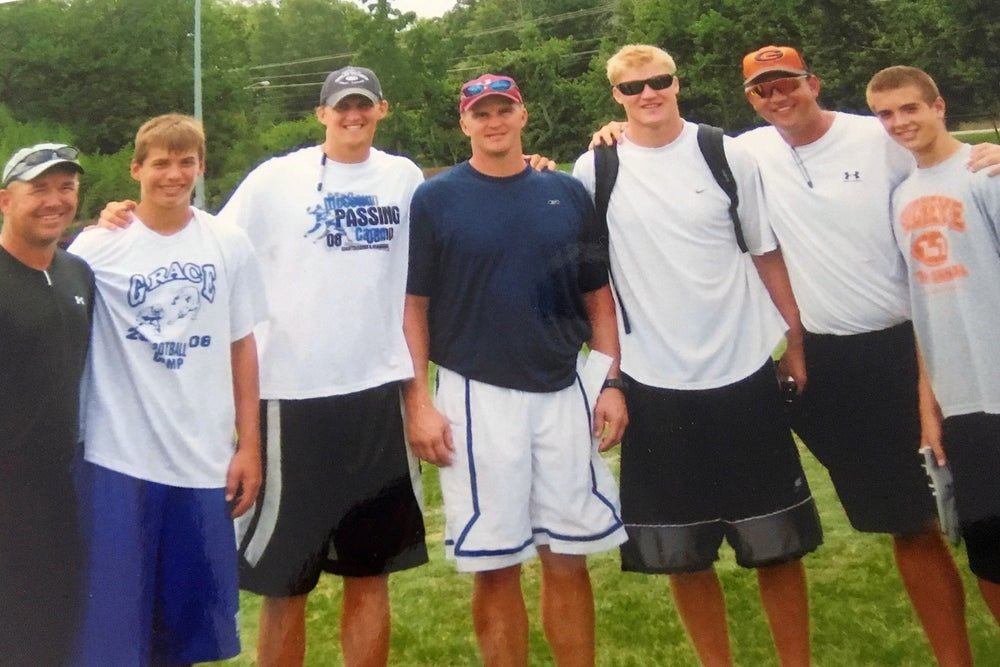 The McCown family at one of Josh’s games with the New York Jets. McCown Family

FILE - In this Nov. 25, 2018, file photo, New York Jets quarterback Josh McCown (15), a former Jacksonville High School star, throws a pass during the first half of an NFL football game against the New England Patriots, in East Rutherford, N.J. McCown has announced he is retiring from playing football after an NFL career that spanned 16 NFL seasons and included stints with 10 teams. McCown, who turns 40 on July 4, writes in a piece for The Players' Tribune on Monday, June 17, 2019, that he will be helping coach his two sons — also quarterbacks — in high school this year.(AP Photo/Seth Wenig, File)

The McCown family at one of Josh’s games with the New York Jets. McCown Family

Josh McCown, the middle brother of the Jacksonville quarterback trio, announced on Monday that he is retiring after a career that spanned 17 years.

McCown, the former Jacksonville High School, SMU and Sam Houston State star, played for 10 NFL teams in 16 seasons and was considered among the most-respected and well-like players in the locker room.

McCown, who turns 40 on July 4, wrote in a article for The Players’ Tribune about his retirement entitled “One Heck of a Journey.”

The former Tyler Morning Telegraph All-East Texas Player of the Year in 1997 will be helping coach his two sons — also quarterbacks — at Waxahachie High School this year. McCown said he also plans to work as a TV football analyst in the future, and ESPN said later Monday it had hired him as an NFL analyst.

“I guess it just goes to show that you don’t always get to choose your own path,” McCown wrote. “But looking back, I’m proud of how my career has gone. I don’t shy away from the journeyman label. I embrace it, full force.

“Because it’s been one heck of a journey.”

McCown finishes with 17,707 career yards passing, 98 touchdowns and 82 interceptions, with a 60.2 completion percentage and 79.7 quarterback rating.

“At the end of the day, no matter what team I was on, I tried to serve it to the best of my ability, and I tried to influence my team in a positive manner,” McCown wrote. “I hope I did that. And I made sure that when my number was called, I was prepared, and I gave it everything I had, every time.”

After a standout career at Jacksonville High School, he played three years for SMU before transferring to Sam Houston State for his senior season where he was the Southland Football League Player of the Year and third-team NCAA Division I-AA All-America.

His older brother, Randy, was quarterback at Texas A&M and his younger brother, Luke, played at Louisiana Tech and spent 14 season in the NFL.

McCown was a third-round draft pick of Arizona in 2002 out of Sam Houston State.

After four seasons with the Cardinals, when he started 22 games, McCown signed with Detroit as a free agent in 2006. Next came stints with Oakland (2007), Miami (2008) and Carolina (2008-09), and then a stop in 2010 with the Hartford Colonials of the United Football League. McCown also coached high school ball during that time, and it appeared his NFL playing career might be over.

He got a look from San Francisco during training camp in 2011, but was cut before the season. Chicago signed him, and he revived his career with the Bears. He had what was then his best season in 2013, when he threw for 1,829 yards with 13 touchdowns and just one interception while filling in for an injured Jay Cutler.

McCown received the prestigious Brian Piccolo Award, an honor given to players of the Chicago Bears. The award is presented to one rookie and one veteran each season who best exemplifies the courage, loyalty, teamwork, dedication and senior of humor of the late Brian Piccolo. Piccolo was a running back for the Bears from 1966 until his death from embryonal cell carcinoma on June 16, 1970 at age 26.

McCown signed with Tampa Bay as a free agent in 2014, spent two years with Cleveland and then joined the New York Jets, for whom he had a career year in 2017. He had personal highs of 2,926 yards passing and 18 touchdowns with just nine interceptions in 13 starts before missing the last three games with a broken hand.

With New York’s quarterback situation uncertain last offseason, McCown was re-signed for one year and $10 million. The Jets ended up trading up in the draft to take USC’s Sam Darnold at No. 3 overall, and McCown became a high-priced backup — something team chairman and CEO Christopher Johnson had no regrets about.

“Josh is very valuable whether he’s on the field or not,” Johnson said early last season. “Not just for Sam, but for a lot of other players. They talk about his leadership. I think he’s money well spent.”

“Just watching Josh, just the way he went about studying the plays that are in the game plan, it’s literally everything, walkthrough, practice, how he treated everything,” Darnold said late last season. “I think it was just awesome to be able to learn and watch him.”

McCown wrote: “When you decide to retire, your whole football life kind of flashes before your eyes. And in it, you see all the people who played a role in making your career possible. Like my wife, Natalie. I mean, you have to think … I played for 10 NFL teams, plus a stop to play with the Hartford Colonials in the UFL. So there was a lot of moving around and a lot of time spent away from my family. And Natalie held it down at every turn. She was a rock. She made it so I could go and do my job with a clear head, knowing that the kids were good and that everything at home was taken care of.

“Honestly, you can say that about a lot of players’ wives in this league — most, probably. The wives really do have the toughest job of all, and they don’t get nearly the credit they deserve — which is basically … all of it. We couldn’t go out and do what we do on the field if they weren’t at home doing everything that they do.

“I can’t say enough about the role Natalie played in my career. Nothing would have been possible without her. She’s Superwoman.”

McCown had thoughts on his children and family.

“Then there are our four kids — Bridget, Aubrey, Aiden and Owen — who have always been supportive, understanding and basically just awesome. There are my parents, who instilled in me a good work ethic and a competitive spirit. My brothers and my sister, who have been the best support system I could have ever asked for. My friends, from grade school to college, and beyond. My agent, Mike McCartney, and Priority Sports. Seventeen years ago I was Mike’s first guy, and he’s been with me every step of the way since. I couldn’t have asked for a better partner on this journey.”

McCown did not forget his high school quarterback coach.

“But there is one person who I want to make sure I acknowledge, because all the success I’ve had in my professional life can basically be traced in one way or another back to one man. His name is Matt Turner.”

Turner is now the head coach at Gilmer High School.

McCown concluded his article with, “So to everybody who’s been a part of it — Coach Turner, Natalie, my family, my teammates … everybody — thank you, from the bottom of my heart. It’s been one heck of a journey.

“And I wouldn’t trade it for anything in the world.”

The Associated Press contributed to this report.