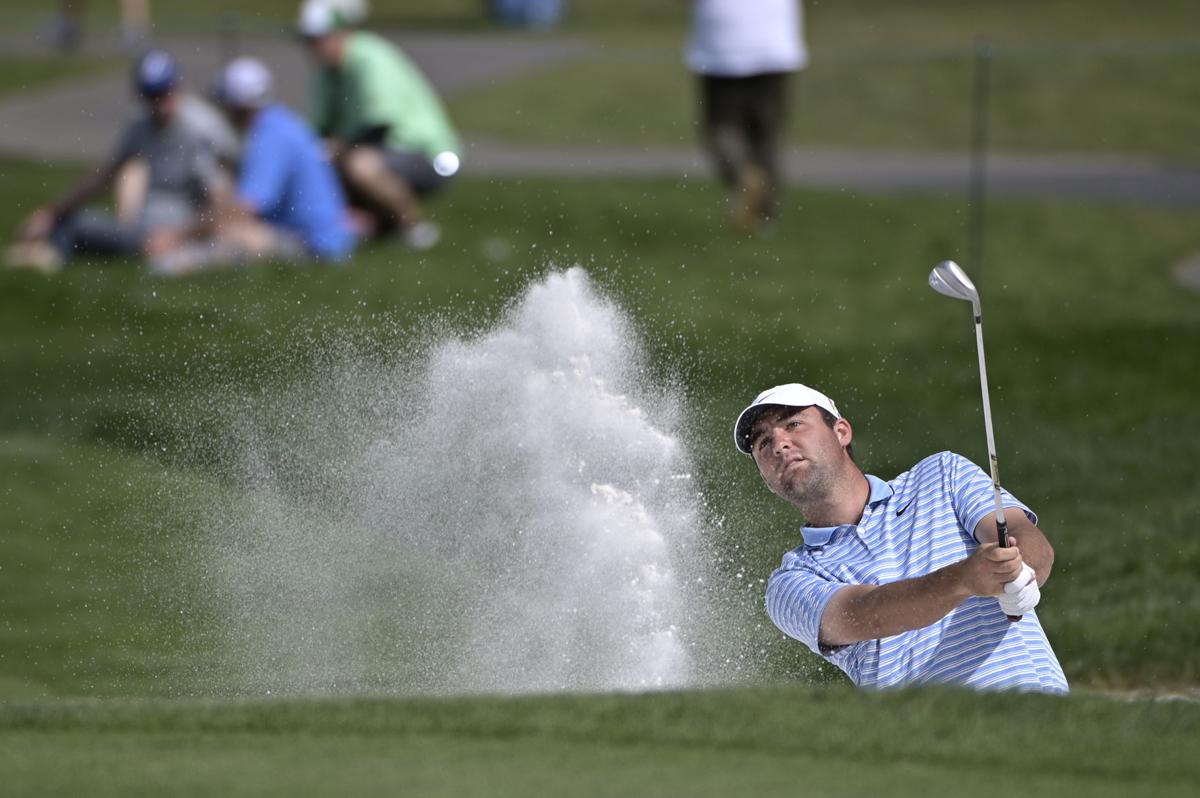 Scottie Scheffler, who played several junior tournaments at Hollytree Country Club in Tyler, hits out of a bunker onto the 14th green during the final round of the Arnold Palmer Invitational golf tournament March 8 in Orlando, Fla. Scheffler qualified for the Masters as a PGA Tour rookie without having won a tournament. 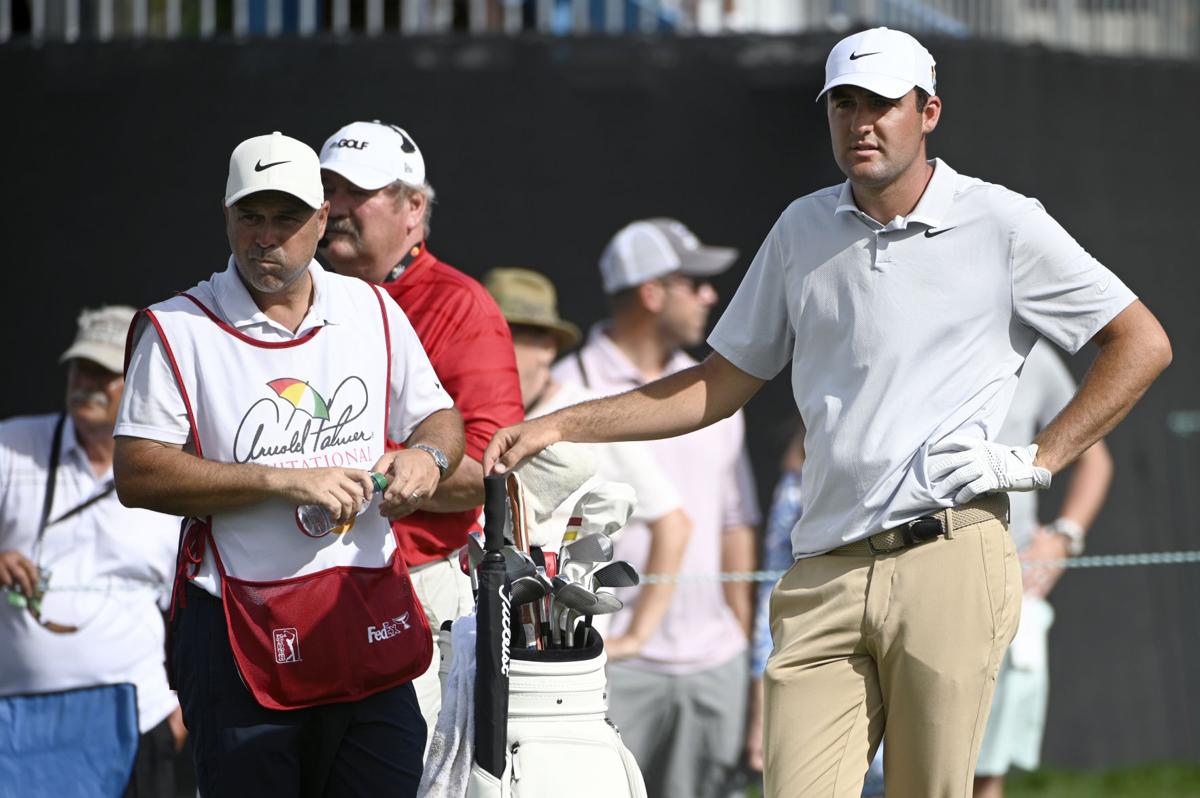 Scottie Scheffler, right, waits to hit his tee shot on the seventh hole during the first round of the Arnold Palmer Invitational golf tournament March 5 in Orlando, Fla.

Scottie Scheffler, who played several junior tournaments at Hollytree Country Club in Tyler, hits out of a bunker onto the 14th green during the final round of the Arnold Palmer Invitational golf tournament March 8 in Orlando, Fla. Scheffler qualified for the Masters as a PGA Tour rookie without having won a tournament.

Scottie Scheffler, right, waits to hit his tee shot on the seventh hole during the first round of the Arnold Palmer Invitational golf tournament March 5 in Orlando, Fla.

Scottie Scheffler has never been in such a hurry that he fails to recognize what’s right in front of him.

At the moment that would be nothing.

“Our lives are put on hold at the moment,” Scheffler said. “It’s a weird feeling sitting at home, not having much to do.”

He can at least look forward to the mail and that cream-colored envelope with a postmark from Augusta, Georgia.

Good news arrived last week when Augusta National, while postponing the Masters until November, said it effectively would freeze the criteria for an invitation. That included the top 50 in the world ranking, and those four players added to the field included a 23-year-old rookie on the PGA Tour.

And now Scheffler, the former Highland Park star who played junior tournaments at Hollytree Country Club each year, gets to wait seven months for his Masters debut.

That he can plan for the Masters this early in his career speaks to the quiet way the New Jersey-born, Texas-raised Scheffler has established himself in five short months. He was at No. 19 in the FedEx Cup standings when the season shut down on March 13 because of the coronavirus pandemic. His world ranking is frozen at No. 45.

It’s rare for a player to qualify for the Masters in his rookie season on tour without winning.

Sangmoon Bae of South Korea was an exception with an asterisk when he played in 2012 as a PGA Tour rookie. Bae had won three times the previous year on the Japan Golf Tour, won the Order of Merit and rose to No. 28 in the world.

Before that was Stewart Cink, who qualified for the 1996 U.S. Open while on the Nike Tour. His birdie on the 17th hole at Oakland Hills allowed him to tie for 16th, which back then earned an invitation to the Masters.

Scheffler had a head start as Korn Ferry Tour player of the year last season. Then, he had three good looks at winning on the PGA Tour. He was two shots out of the lead going into the final round in Bermuda, one shot behind at Sea Island and tied for the lead in the California desert. Each time, someone played better.

He kept moving closer to the top 50 and did well to keep the Masters off his mind.

“I was definitely anticipating it, but I did my best not to fall into the trap,” Scheffler said. “Day to day is important to me.”

It’s always been that way.

John Fields, his coach at Texas, recalls the dinner at Riviera this year when Scheffler spoke to the college players who competed in the Collegiate Showcase for a spot in the Genesis Invitational. Scheffler had earned that spot two years earlier his senior year.

The topic was setting goals for the year.

Scheffler has played Augusta National a couple of times already as a guest with the rest of his teammates at Texas, where he spent four years — no summer school — to earn a business degree.

College degrees on tour are about as rare as PGA Tour rookies getting into the Masters, especially highly touted amateurs like Scheffler, who won the U.S. Junior Amateur.

“I really had so much fun in college, I never entertained the thought of turning pro,” Scheffler said. “I feel like I could have turned pro after my first year in college. But I made great friends and grew up a lot. It was an important time for me. That’s not to say everyone should stay four years.”

Fields attributes the calm outlook to Randy Smith, the famed instructor at Royal Oaks in Dallas, who guided Scheffler through the pain and adjustments of going from 5-foot-2 in seventh grade to 6-foot-3 when he went to Texas.

Scheffler’s family moved to Dallas when his mother became chief operating officer at a large law firm. They looked for a club to join and found Royal Oaks — and Smith.

“People wanted me to look at this little 6-year-old kid,” Smith said Tuesday. “It took me about 15 minutes, and I knew right then. It was so obvious. He hit low and high. Here’s this tiny little kid and he could hit every shot. He could shape it, move it, and he was doing it by feel.”

Fields was impressed by how he could juggle interests — golf, business school, social life, family — without ever seeming to be in a big hurry. In just under two years, Scheffler went from college graduation to Monday qualifiers to Q-school to the developmental tour to a PGA Tour card.

The next stop is the Masters. As far as Scheffler is concerned, it will get here soon enough.