Lindale goalie Dylan Boyd (00) is unable to stop a shot from Pine Tree's Chris Johnson (not pictured) in the first half of their Class 4A bi-district soccer playoff on Tuesday at Trinity Mother Frances Rose Stadium. (Mike Davis | Correspondent) 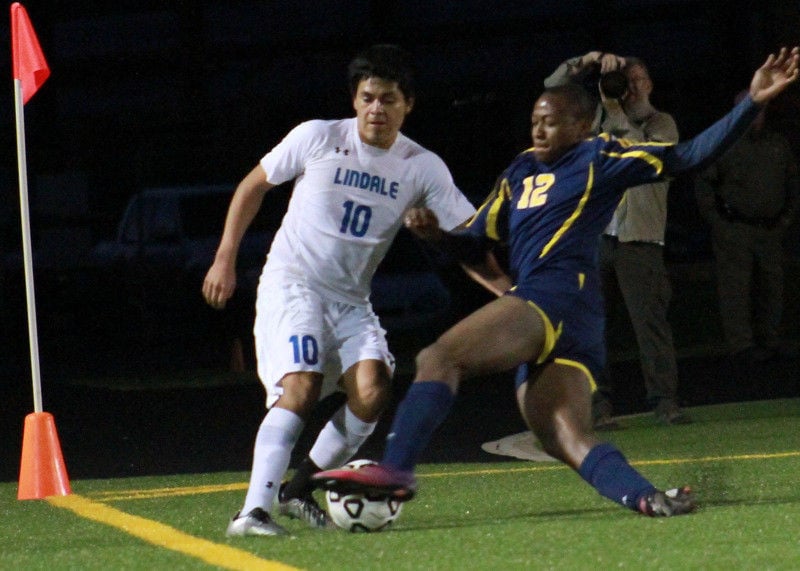 Lindale goalie Dylan Boyd (00) is unable to stop a shot from Pine Tree's Chris Johnson (not pictured) in the first half of their Class 4A bi-district soccer playoff on Tuesday at Trinity Mother Frances Rose Stadium. (Mike Davis | Correspondent)

Lindale coach Jason Lawless noted Pine Tree for having skilled players all over the field, but one in particular stood out.

"No. 10 was just incredible," Lawless said. "He's one of the best players I've seen in a long time; very special kid."

Wearing the No. 10 jersey for the Pirates was Allan Maceda, who scored once in each half to lead Pine Tree to a 4-1 victory in their Class 4A bi-district boys soccer playoff on Tuesday at Trinity Mother Frances Rose Stadium.

The Pirates (18-4-3) advance to play Mount Pleasant in the area playoffs on Friday, possibly back at Rose Stadium. The winner gets either John Tyler or Texas High, who play Thursday night.

The Eagles may not want to come back to Rose Stadium any time soon after losing their last two games at the venue by a combined 11-2, including a 7-1 setback to JT earlier in the year.

Maceda may relish a chance at returning to the field where he powered Pine Tree to victory.

The sophomore striker dazzled with his dribbling skills and eventually showed off his shooting ability when he lashed a low shot into the far corner off a pass from True Clark with 15:23 left in the first half. Less than two minutes into the second half, he struck again for a commanding 3-0 advantage.

Maceda nearly had another goal when he dribbled through three defenders only to have his shot saved. The ball then bounced to Chris Jordan, who skied his shot over an empty net.

Jordan scored anyway when the senior looped a ball from the top of the box over everyone and into the back of the net following a corner kick.

Down 3-1, Lindale kept fighting, breaking through with a goal from Jesse Emberley with 24:56 to play. Timmy Moyer tallied the assist, with Emberley poking home just before the onrushing goalkeeper.

Emberley had two more chances that could have tied the game for the Eagles.

With 20 minutes to play, the senior got past the defense but shot just wide with only the keeper to beat. With 2:05 left, Emberley's shot from close range was put wide for a corner and Lindale was unable to mount any further comeback.

"I'm very proud of them the way they battled," Lawless said. "We fought the whole time and that's what I like about this team, they never quit. No matter what the score is, we're going to fight until the end.

"We scored, we got a little bit of momentum. We just didn't play good enough first half. I'm proud of them. They didn't quit. That's all you can ask for a kid. We got beat by a better team. They're good, they're really good. Hats off to them."

Late in the game, Pine Tree drew a penalty that Clark smashed into the left corner with 43 seconds left.

"I think a lot of credit to Lindale … they kept fighting," Lo said. "That is good character for them."